Grand Theft Auto fans got huge news today with Rockstar Games officially confirming the GTA Trilogy Definitive Edition. It has been rumored for some time that the PS2 era classics GTA 3, Vice City and San Andreas are being remastered for modern consoles. And now Rockstar has confirmed that these beloved GTA games are on their way to the latest and greatest consoles, with a “coming soon” release date.

So far, only a short teaser trailer for the GTA Trilogy Definitive Edition has been revealed, with no in-game footage revealed so far.

However, further details about the GTA Trilogy were revealed in a message by Polygon.

Rockstar Games has confirmed that the upcoming GTA Trilogy compilation will “include upgrades across the board, including graphical improvements and modern gameplay improvements”.

But despite these graphical improvements, the remastered games still retain “the classic look and feel of the originals”.

The GTA Trilogy is coming to PS4, PS5, Xbox One, Xbox Series X and S, Nintendo Switch, and Windows this year.

It will also come to Android and iOS next year.

More details will be revealed in the coming weeks, while existing versions of the classic GTA games will be removed from digital marketplaces next week.

The reveal of the new GTA remasters comes ahead of the 20th anniversary of the release of GTA 3.

First released in October 2001, GTA 3 is the game that set the blueprint for what fans would expect from a 3D GTA game for years to come. 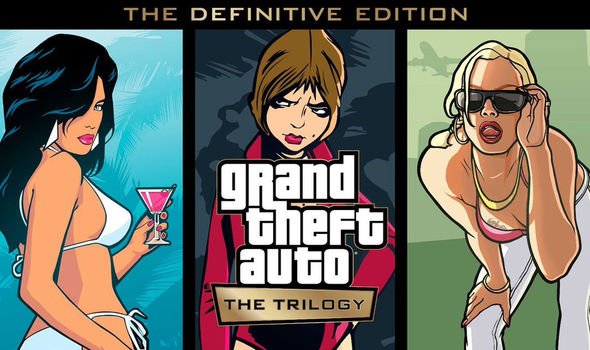 The GTA Trilogy Definitive Edition is coming to consoles in 2021 (Image: ROCKSTAR GAMES)

GTA 3 was a PS2 exclusive at launch, as were Vice City and San Andreas – but these games came later on the original Xbox.

GTA 3 and Vice City went to the console from Microsoft as a compilation release, with San Andreas as a standalone release for the OG Xbox.

In a thread about the GTA Trilogy Definitive Edition, Rockstar Games paid tribute to the original trilogy from the PS2 era.

“We’d like to say a big thank you to all the Grand Theft Auto fans who have supported the games over the past two decades.”

Crystar will also be released for Nintendo Switch in Spring 2022

Call of Duty Warzone Halloween 2021: When does Haunting of Verdansk start?