NetEase’s dazzling technology is mysteriously opened for testing, and its art is comparable to PCs and consoles

GameLook report/Since it was first exposed in May of this year, “The Handy Game Against the Water” has been affecting the hearts of many MMO enthusiasts.

Recently, this MMO mobile game developed by the largest team by NetEase mysteriously opened the first round of offline testing, and the official name was specially named-“Amazing First Seen”. According to the official data, after announcing the opening of the first test recruitment, more than 700,000 applications were received in just a few days, which is enough to show the high degree of players’ attention to the game.

In order for the test to proceed smoothly, NetEase once again made a big deal, not only in the state banquet-level five-star hotel-Zhejiang Xizi Hotel, on the south bank of West Lake in Hangzhou, but also promised to provide players participating in the test with free food for 2-3 days. Accommodation contract. Calculated on the basis of the room rate in Xizi Hotel over 1,000 yuan a day and the participation of hundreds of people, the room rate exceeded one million in just a few days. 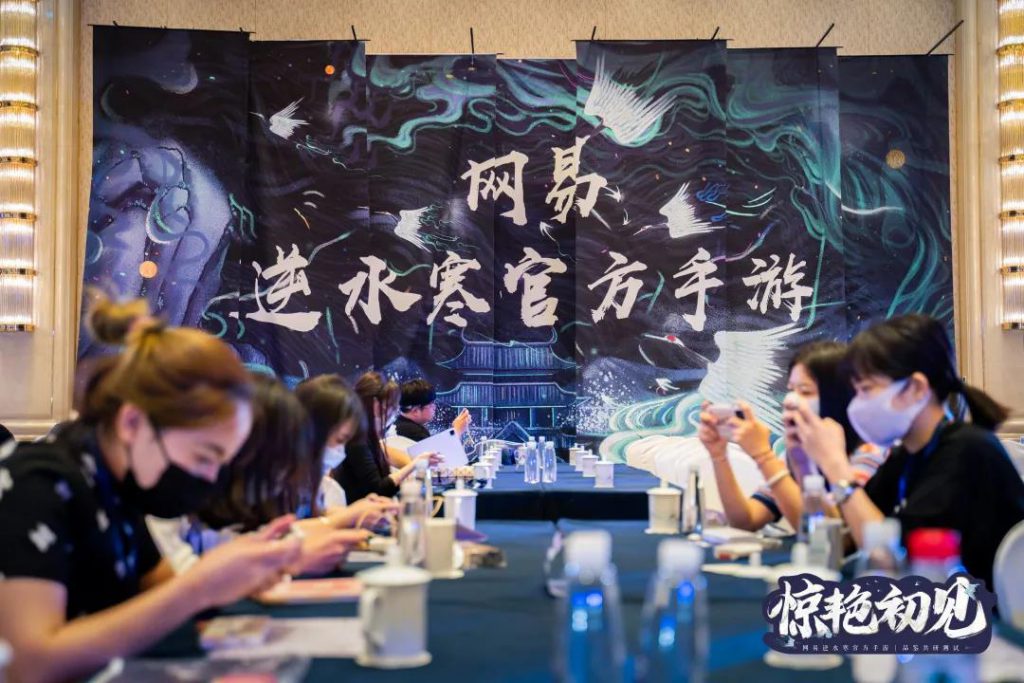 What kind of game is it that can make the official and the players pay so much attention? Since the testers have signed a strict confidentiality agreement, we are currently unable to search the Internet for any clues about the first test, but from the actual machine demonstrations announced in the past, we can still get a glimpse of this martial arts open world masterpiece.

The big art factory really deserves its name, is NetEase’s art group rolled into this?

The most commendable point of “The Handy Game Against the Water” is undoubtedly its high-quality artistic performance. This was fully demonstrated in the actual machine demonstration announced last month.

It is understood that the area for testing this time is the “Cizhou area” in the game. Judging from the demonstration of the actual machine, the screen of “The Handy Game Against the Water” is brighter and fresher than that of the end game, and the effects of vegetation and clouds are very amazing. On the whole, both Cizhou’s entire scene design and its lighting details have maintained the industry’s top level, highlighting the consistent level of NetEase, the “big art factory”. 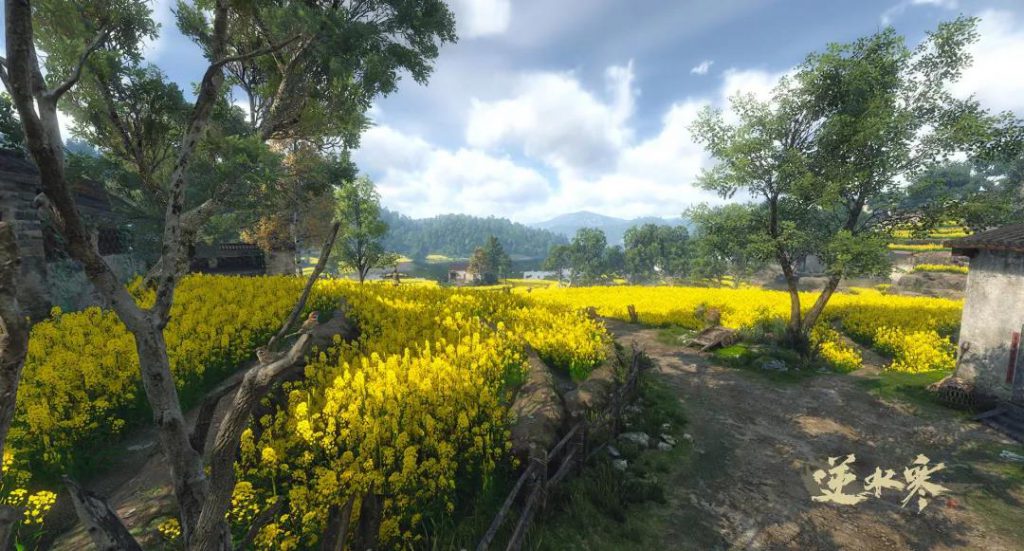 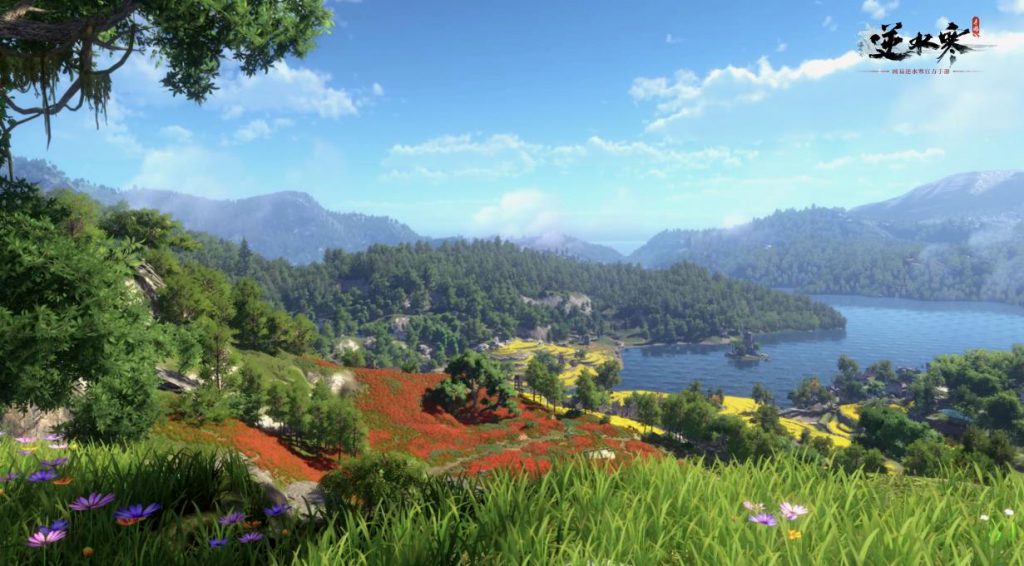 Unlike Cizhou, which is a mobile game, officials have stated that the Cizhou in the mobile game has been remade in several major sections such as the overall terrain, functional blocks, village layout, and gameplay embedding. In order to make the end-to-end players quickly familiar with it, the general positioning of Cizhou in the mobile game is still consistent with that of the end game, and it is still a trading town famous for its porcelain.

In fact, the screen performance of the big scene is just an appetizer for the outside world by NetEase, and the real show of technology is actually in the female character in the video.

Through careful observation and comparison, in the picture information with characters, GameLook believes that there are at least three places worth savoring: one is the real physical effect, the other is not lost to the host-level material modeling, and the third is almost real. Character micro expressions.

Let me talk about the real physical effects first.

At the 25th time of the video, the female character will have a swaying action in the process of choosing clothes, and then the clothes will follow the character’s movements to show the effect of natural swing, and then hang down naturally under the action of gravity. The whole process is very natural and true. Give life a hard feeling.

It can be seen from this that “The Hand Tour of Against the Water” has at least confirmed that this kind of real soft cloth touch effect has been achieved, and perhaps further guessing that this physical effect may continue to be used in other parts of the game world, or even combat performance. among.

Secondly, the material modeling of “The Mobile Game Against the Water” can also be called the host level.

At the beginning of the video, the official specially presented a process of the female character putting on makeup in the mirror, and also carefully gave close-up shots of the eyes and mouth. From these close-up shots, it is not difficult to find that the character’s skin is no longer the “perfect” it used to be, but there will be some “pits”, and these pits are actually the character’s pores. 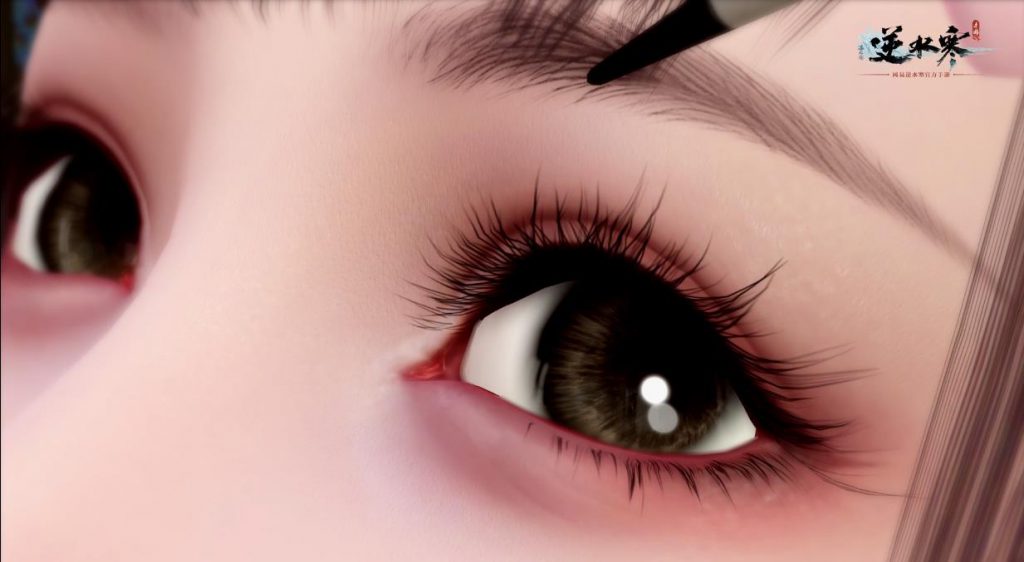 From past experience, next-generation modeling that can be as fine as pores generally only appears on consoles and high-end PCs, such as “God of War 4” on PS. Mobile games that can achieve this effect are basically rare. On the one hand, it shows that the model of “Nian Shui Han Mobile Game” itself is a high model, and on the other hand, it also implies that other modeling of the game is likely to be based on this standard.

The last thing I have to mention is the vivid micro-expressions of the characters.

Compared with the stupid performances of characters in many mobile games in the past, the characters in “The Handy Game” have improved significantly, so that after seeing the demo video, many players mistakenly think that this is a carefully crafted CG animation.

In addition to the techniques mentioned above, the introductory work on the fine arts of “Handy Tour Against the Water” is still going on. In the actual demonstration video released in May of this year, we found that NetEase actually added this front-end game and console unique light pursuit effect to the game to make the overall picture performance more realistic. 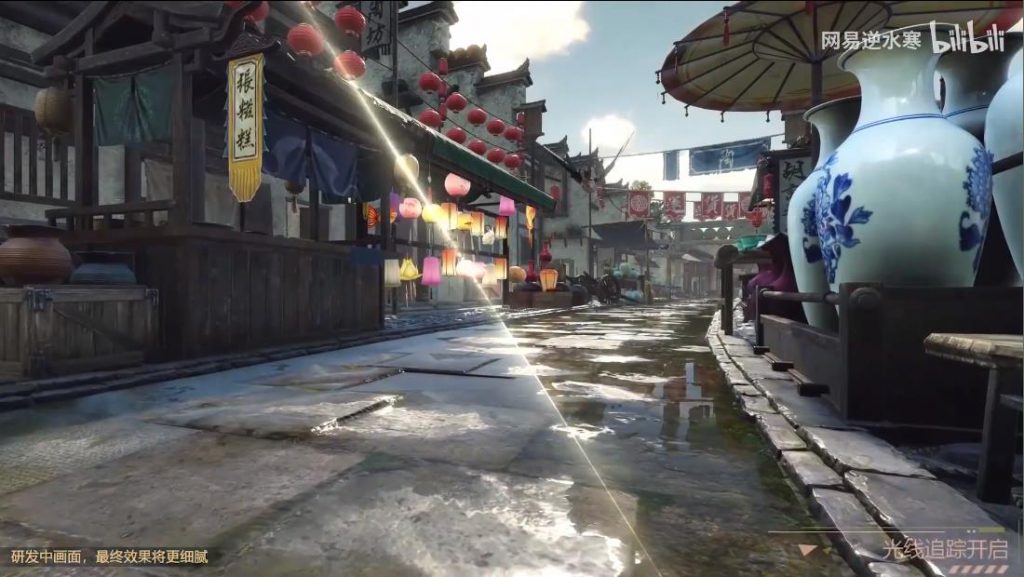 Since the birth of the IP “Nice Cold”, NetEase has referred to this game as the “breathing rivers and lakes”, referring to the realistic art quality of the game. Now, when this IP is transferred to mobile games, NetEase has also not forgotten to bring the phrase “the world that can breathe” slogan into it.

Judging from the current performance, NetEase has indeed done it.

The picture quality is so good, it must be very demanding on the performance of the mobile phone, right?

Many people are curious about the engine used in “Nai Shui Han Mobile Games” to be able to do such fine modeling. Given that NetEase has not released relevant information, the game is still in a state of “visible but intangible”, but this does not prevent us from making relevant speculations.

Judging from the screens displayed in the current mobile game promotional videos, the screen quality of “Backwater Cold Mobile Games” is obviously far superior to most of the mobile game products on the market, and it can even compete with your own mobile game on the screen. . As a mobile game with host-level art quality, players naturally have a lot of questions. The first question is: Does this game eat mobile phone configuration?

In the information released for the first test, GameLook found an important reference coordinate. Officials said that this offline test will not require testers to bring their own mobile phones, but will provide an iPhone 12 test machine on site to play games. As we all know, the processor used by iPhone 12 is Apple A14 Bionic, and its performance is not much different from that of Snapdragon 888. That means that the “Handy Game Against the Water” can at least run smoothly under the chips of the A14 and Snapdragon 888 gears.

In the “Wanfo Grotto”, NetEase scanned a real small Buddha statue with a 3D surround matrix camera and zoomed in to the same scale. Finally, a single model with up to 16 million faces was obtained, which can be said to have achieved pore-level accuracy. But such a huge high model can run through on the PC with the help of “no moment rendering”. 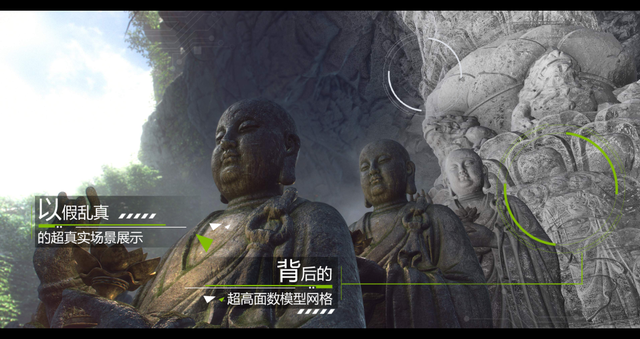 Compared with the traditional game rendering mechanism, the biggest feature of the “momentless rendering” technology is the use of independent hardware modules on the graphics card to complete the automatic rendering of the model. Simply put, let the computer judge the player’s picture first, and then only dynamically render the model in the player’s field of view, and the rest of the model out of the field of view does not need to be processed, thereby reducing the workload of the graphics card.

In mobile games, Qualcomm and Apple’s chips also support “momentless rendering” technology. The advantage of this is that it can maximize the number of faces of the model without excessive pressure drop hardware performance, so that it can be simulated. Develop a model close to reality. NetEase has adopted this technology in the “Handy Tour Against the Water”, which is obviously to further fulfill the original slogan-to create a “end game-level picture” and “a great martial arts open world.”

With the intensification of the entire game industry, NetEase used a self-developed product to prove that not only did it not fall behind, but it still occupies an absolute advantage.

Although the “Handy Game Against the Water” has not been released to the public at present, from the scattered information released by the government, we can see the effort that NetEase has put into this masterpiece. Coupled with the blessing of the big IP of “Nai Shui Han”, perhaps in the near future, this blockbuster will reshape a new round of mobile game market structure.