The latest data from the Sensor Tower store intelligence platform shows that in September 2021, China’s mobile game products in the overseas market revenue and downloads rankings, the detailed list changes are as follows.

Revenue list of mobile games going to sea in September

Thanks to the great success of the 2.1 version and the anniversary celebrations, in September, Miha’s “Yuan Shen” mobile terminal overseas revenue exceeded 234 million U.S. dollars, ranking second in this issue of overseas revenue of King “Candy Crush Saga” (Candy Crush Saga) Twice the income. The top three markets for its overseas revenue are the United States, Japan and South Korea, which account for 31.6%, 30.8% and 11.3% of its overseas revenue respectively. If you include the revenue of the Chinese iOS market, “Yuan Shen” broke the highest monthly revenue record for global mobile games with 341 million US dollars. The last record was Tencent “PUBG Mobile” (consolidated “Peace Elite” revenue) in March 2020 Hit a record of 300 million U.S. dollars. 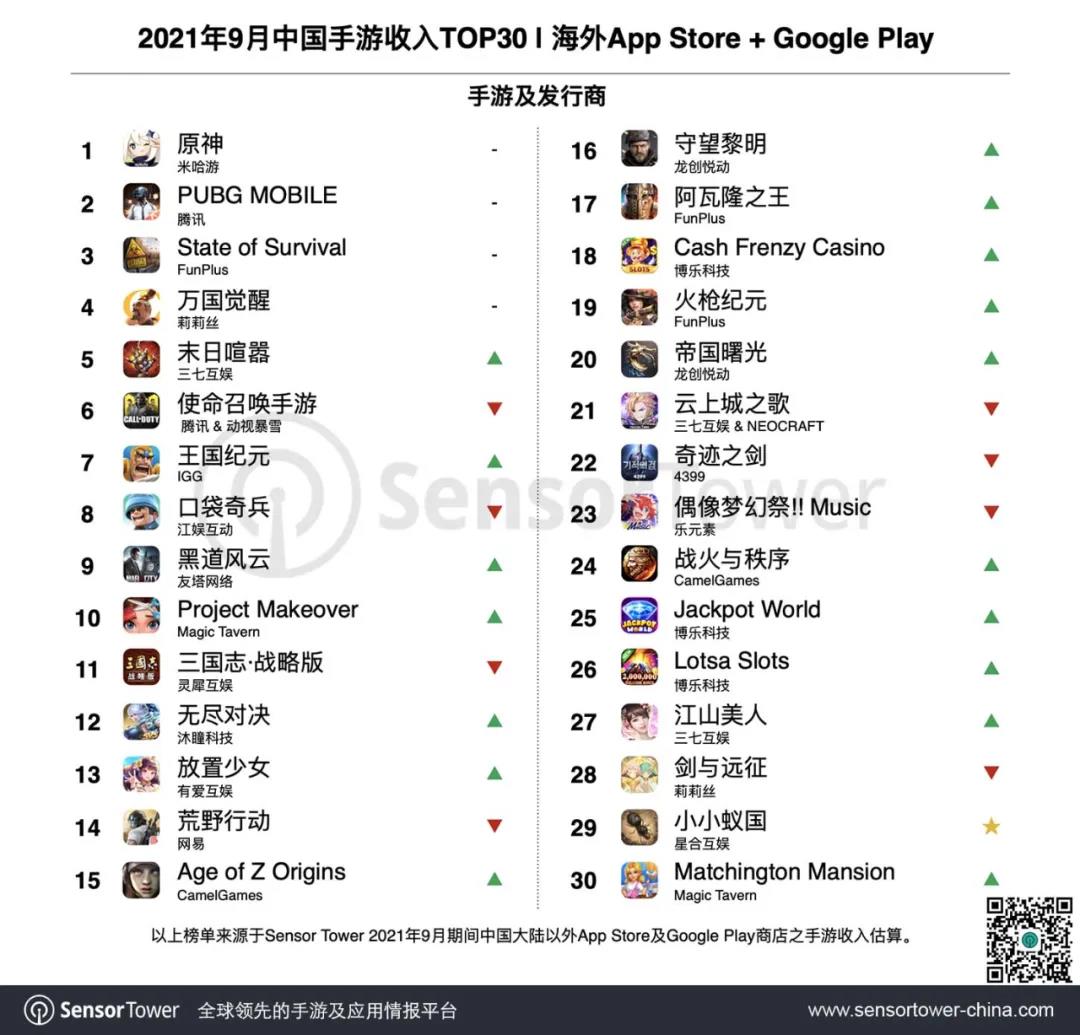 Long Chuang Yuedong’s “Watching the Dawn” September overseas revenue increased by 27.4% month-on-month, ranking up 7 places to 16th. In the past two years, as several doomsday theme mobile game masterpieces have been listed one after another, the income of this theme in overseas markets has increased by 167%, and it has become the theme with the highest overseas income in the first half of 2021. As one of the first SLG mobile games to adopt this kind of theme, “Watching Dawn” has maintained its appeal to players by launching a new season and new gameplay. It has ushered in reverse growth in the four years of its listing, demonstrating the publisher’s operational strength, while at the same time, It also reflects that there is still room for growth in the subject matter.

Xinghe Mutual Entertainment’s SLG mobile game “Little Ant Nation” increased its revenue by 7.1% month-on-month, and was ranked 29th on the list for the first time, further diversifying the mobile game themes in the revenue list. “Little Ant Kingdom” successfully opened the overseas mobile game market with its unique and creative insect theme. Entering October, its daily flow has maintained steady growth, and the subsequent market performance is worth looking forward to.

In terms of revenue growth, the overseas revenue of Mihayou’s “Yuan Shen” mobile terminal in September increased by US$125 million compared with August, ranking first on the growth list.

Following its launch in Japan at the end of June, the two-dimensional mobile game “High Experts Group” was released to the Korean market from Bilibili in mid-September, ranking No. 4 on the growth list. FunPlus’s simulated mobile game “Family Farm Adventure” (Family Farm Adventure) was launched at the beginning of this year, and its revenue for the current period increased by 31.2% from the previous month to the 9th place in the growth list. As one of the classic themes in the Western market, farm simulation management games have a good performance on PC, mobile games and other platforms, but Chinese mobile game manufacturers are rarely deployed in this category. At present, the daily flow of “Fei Fei Adventure” is entering an accelerating growth channel, and it is expected to become the first commercial mobile game that has successfully opened up overseas markets.

Tencent’s “PUBG Mobile” has been downloaded more than 14.6 million times overseas in September, and it continues to top the list.

The handheld casual game “Stone Miner” was launched in many overseas countries in early September. It received 13.4 million downloads in this issue and ranked second on the airborne list. The top three markets for downloads are the United States, Brazil, and Russia, accounting for 14.3%, 10.8%, and 8.3%, respectively. 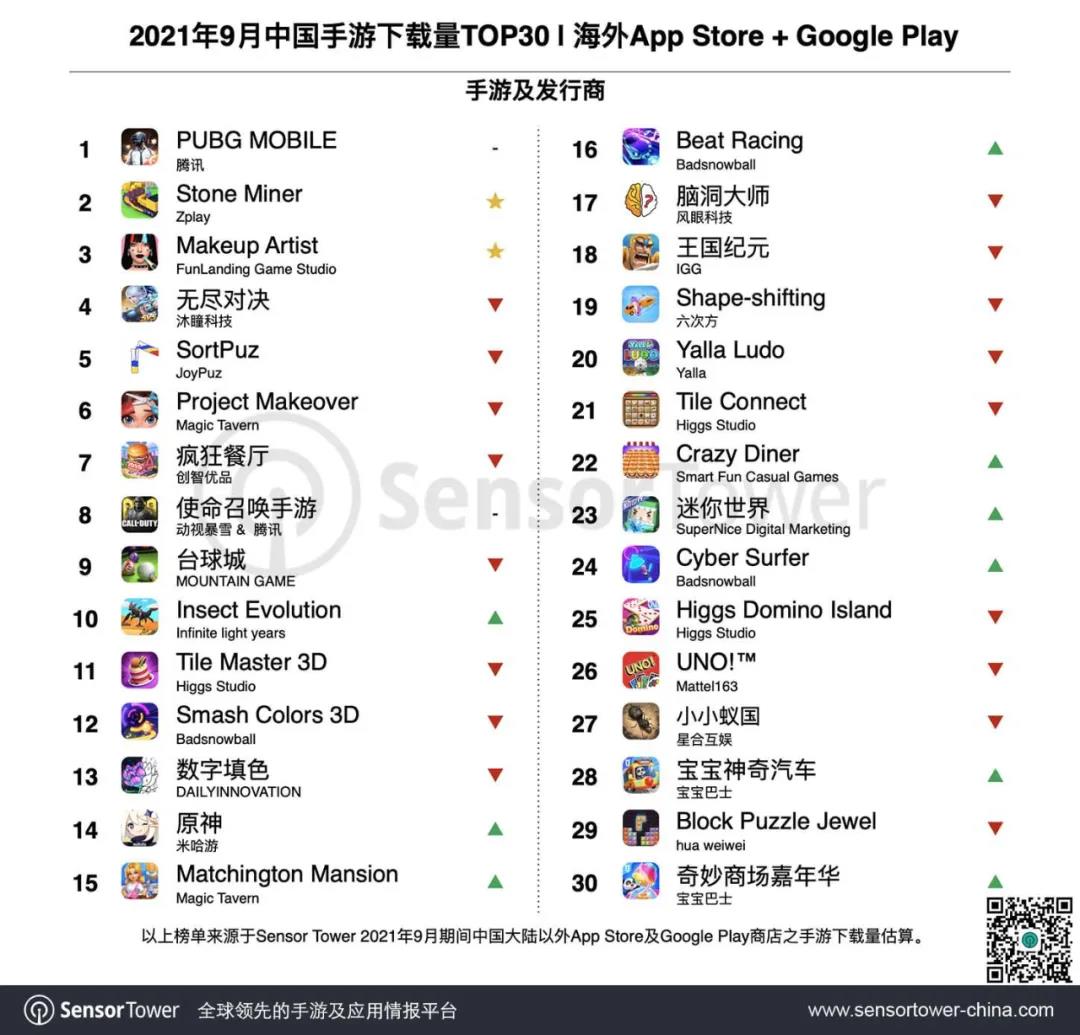 Many newcomers, but none of them can endanger FIFA 22