After being rebuilt for a year and full of sincerity, can this two-dimensional barrage shooting mobile game come back against the wind?

GameLook report/With the increasingly fierce competition in the two-dimensional mobile game market, more and more manufacturers who have reached the limit of artistic power are beginning to think about how to seek differentiated development in gameplay. Therefore, in addition to the common categories such as card and RPG, some once niche categories have gradually moved into the mainstream market after the popularization of manufacturers. Among them, “Eastern Project” has been occupied in the hearts of senior two-dimensional players. One place barrage game (STG).

In January last year, GameLook reported on a two-dimensional STG mobile game called “Breaking Witch”. Its excellent sound and picture performance impressed many players. However, due to the fact that players have put forward a large number of amendments in many aspects such as combat experience and plot tension in the pre-test, the producer announced through the official station B account in June last year that the game will be “substantially refactored”, and the original public beta plan is also It had to be postponed indefinitely because of this. 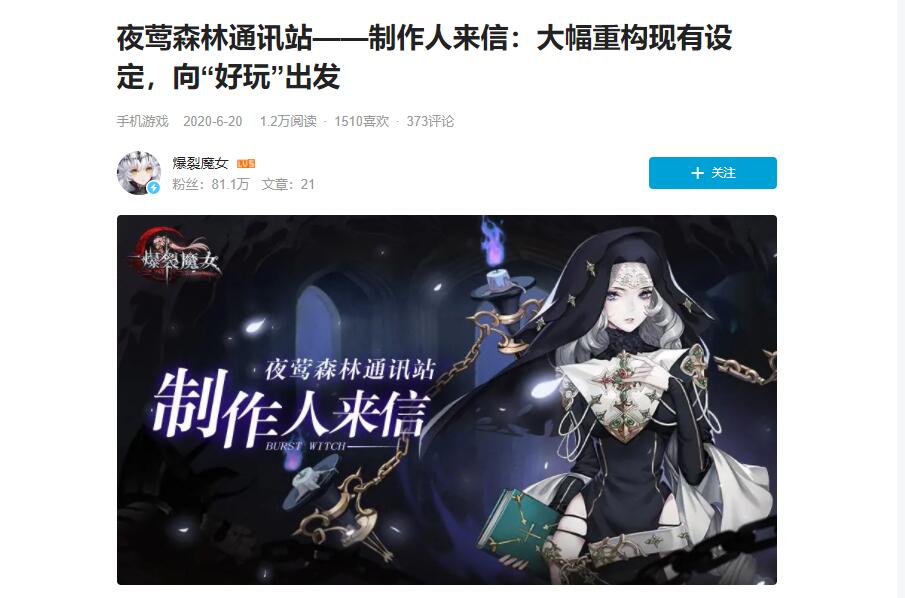 After a postponement of more than a year, on October 15th, this two-dimensional STG developed by Shanghai Huihuan Network and distributed by Bilibili finally completed its nirvana and opened its public beta. After an all-round re-engineering, can “Blasting Witch”, which had a total of over one million reservations in all channels, please the long-awaited players?

Promote PVThe audiovisual breakthrough may be the most gothic STG

Although it has a very gorgeous art performance, the first impression of the players of “Blast Witch” is that it began with music. In the login interface, the melodious violin solo allows the player to be naturally led into a magical and slightly dark Gothic world, and during the battle, a large number of vocal accompaniment or solo gothic music is the atmosphere of the game. The rendering has been raised to a new level, so that the player is like being in a large-scale musical with a medieval fantasy theme.

In fact, music has always been the soul of STG, and the prosperity of fan music creation in “Eastern Project” has so far made other fan clubs hard to beat. For STG, music is an excellent reconciliation of the overly strong visual impact of the barrage, which can effectively alleviate the tension and anxiety of the player during the battle. For the two-dimensional game that focuses on plot and character shaping, music can play a very good supplementary role in this regard, and “role music” is an important part of Eastern fan music.

Complementing the music is naturally the well-known art performance of “Blasting Witch”, which includes both the character image and the UI performance. Compared with the previous version, the new version’s understanding of “completeness” has undoubtedly risen to a new level. 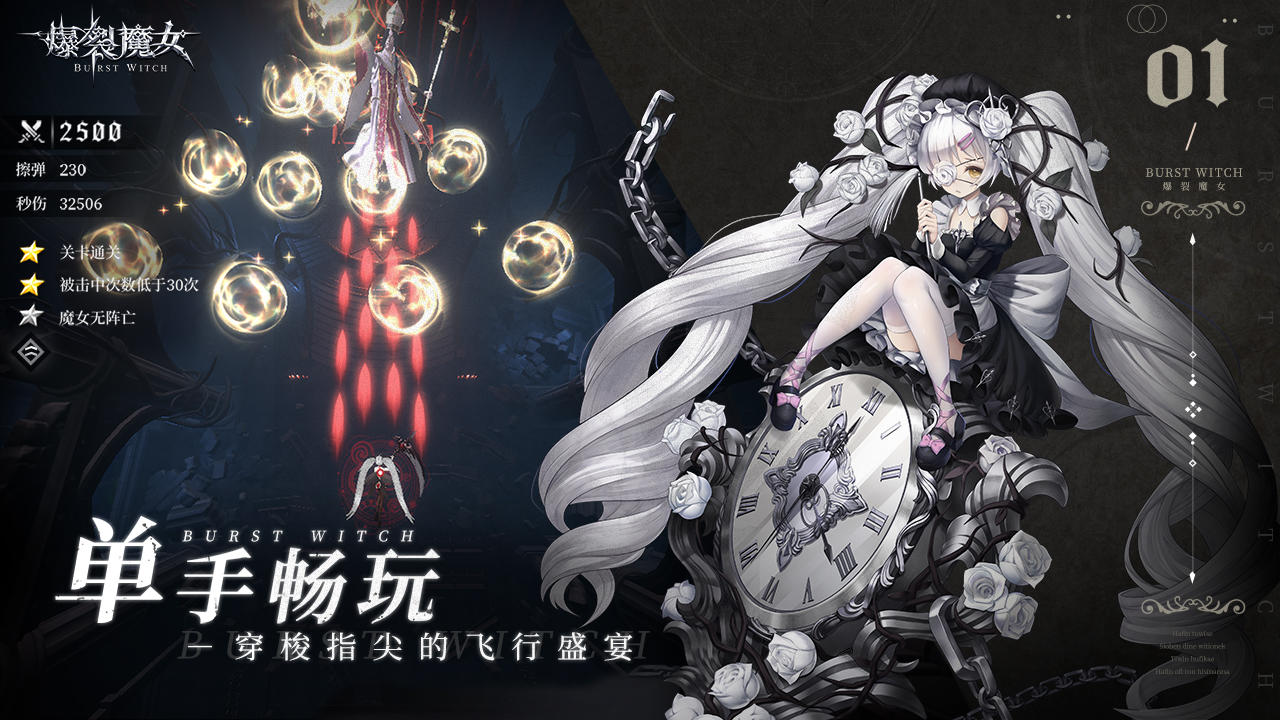 In the previous version, the ubiquitous little red dot in the game interface to remind players of new content used a more mediocre dot design. In the new version, it has become a more gothic cross. Similar gothic patterns have also appeared in various interactive interfaces such as dialog boxes, button borders, and pop-up windows. 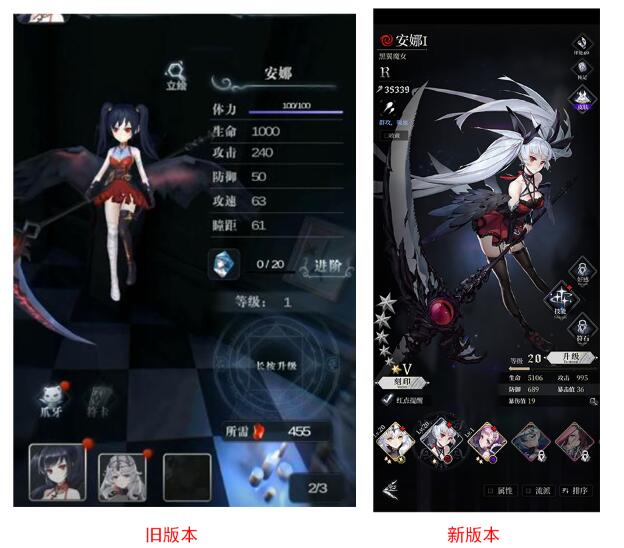 This stylized artistic expression naturally continues to the characters. The character image of “Blasting Witch” strictly follows the Gothic style, and the costume design is very sophisticated. The complicated and exquisite lace pattern brings a high-level artistic presentation to the character, which also makes its overall style different from the traditional Japanese style. Cute style, more mature and elegant. 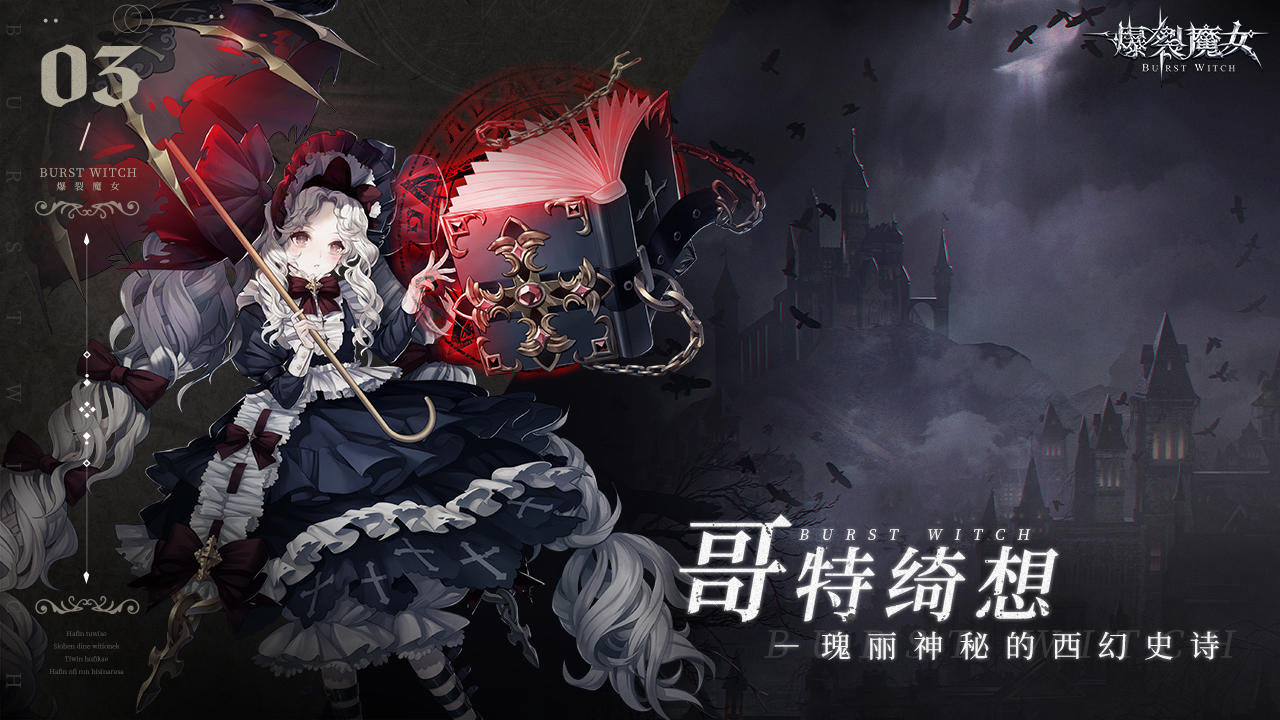 In the main interface and character display interface, Live 2D’s presentation method further embodies the sense of refinement and freshness. The reworked Live 2D is more exquisite and delicate, and the rendering in the light effect details is also more dynamic and beautiful, which is undoubtedly at the top level in the current two-dimensional mobile games.

In addition, it is worth mentioning that the vertical screen mechanism originally adopted due to the characteristics of the barrage game unexpectedly fits well with the character display of the game. The characters in the Gothic style are generally slender and slender, and the dresses are mainly used in dresses. The visual perception under the vertical screen is much better than that of the horizontal screen.

The characters in the battle scene are modeled in 3D. Although many times they will be covered by the player’s fingers, the production team has carried out a lot of rework to ensure that the 3D rendering is equally exquisite. From the actual performance, the UI, lighting effects, modeling and background of the battle scene have been significantly improved compared with the previous version, and the overall look and feel is exquisite and harmonious.

In the previous test version, the player who complained the most was the combat performance. Whether it is the visual effects of the barrage, the skill release of the character, or the density of the barrage between the enemy and the enemy, it has triggered intense discussions among players. In fact, what players are discussing is also an eternal problem of STG games-the balance of shooting and dodge. 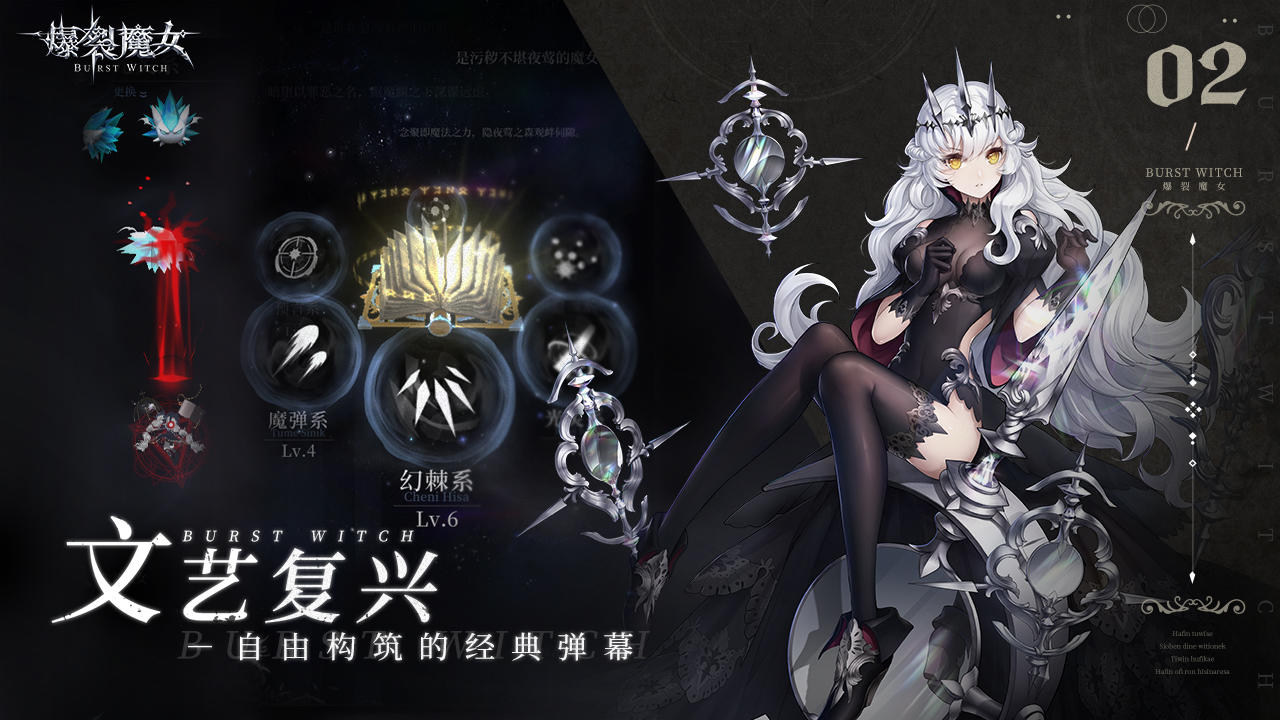 Most games have a clear preference for offensive and defensive tendencies. For example, a simpler action game will focus on offense and weaken defense, so that the handicapped party can defeat opponents with a violent matchless mowing game without tricks. For hard-core games like “Sekiro”, players need to prioritize defense and find opportunities to give a fatal blow between the enemy’s offensive.

But for STG games, shooting and dodge are always a five-to-one problem. Players must be both offensive and defensive in the dense barrage to successfully defeat the defensive boss. The producer also stated in the previous remake statement that it is necessary to think clearly about what players like “is it the sense of accomplishment of avoiding barrage or the sense of offensive pleasure”.

However, for STG mobile games, there is a new problem: because the player must use his fingers to manipulate the character to move and release skills, the screen below and around the finger will become a blind spot of vision. If the barrage is too dense, it will cause the player to When manipulating, he was hit by an unnoticeable barrage in the blind zone.

In the new version, the game team has made many adjustments to the balance of shooting and dodge. The most intuitive change is that the barrage has become clearer and more conspicuous. The enhancement of light effects not only improves the quality of the game, but also makes it easier for players to distinguish the source of the barrage and perform targeted shooting or dodge. In addition, all skills support automatic release, which reduces the difficulty of the player’s operation. The relatively ample time limit for clearance and the design of a certain total number of kills to achieve Samsung clearance takes into account the guidance of both offensive and defensive aspects, so that players can improve. Flexibly balance offensive and defensive options.

At the same time, the unique development system of the two-dimensional game brings new strategic depth to STG. With the growth of character levels, they will also have a richer combination of skills, providing players with more options for breaking through certain specific levels. In battle, players can switch roles at any time to deal with enemies with different attributes. Non-combat characters will automatically restore their health and energy, and can be switched to the field again in subsequent battles.

In addition, the attribute system was retained after the icon was renewed. “Blasting Witch” uses a simple triangle attribute system. The three attributes of light system, dark system and chaos are mutually restrained. This design will not make players too entangled in the development of characters with different attributes, and at the same time, it is not good at STG games. Players have provided the possibility to increase their combat power against enemies with different attributes, which is a good idea for improvement in the process of STG moving from a niche to the masses. 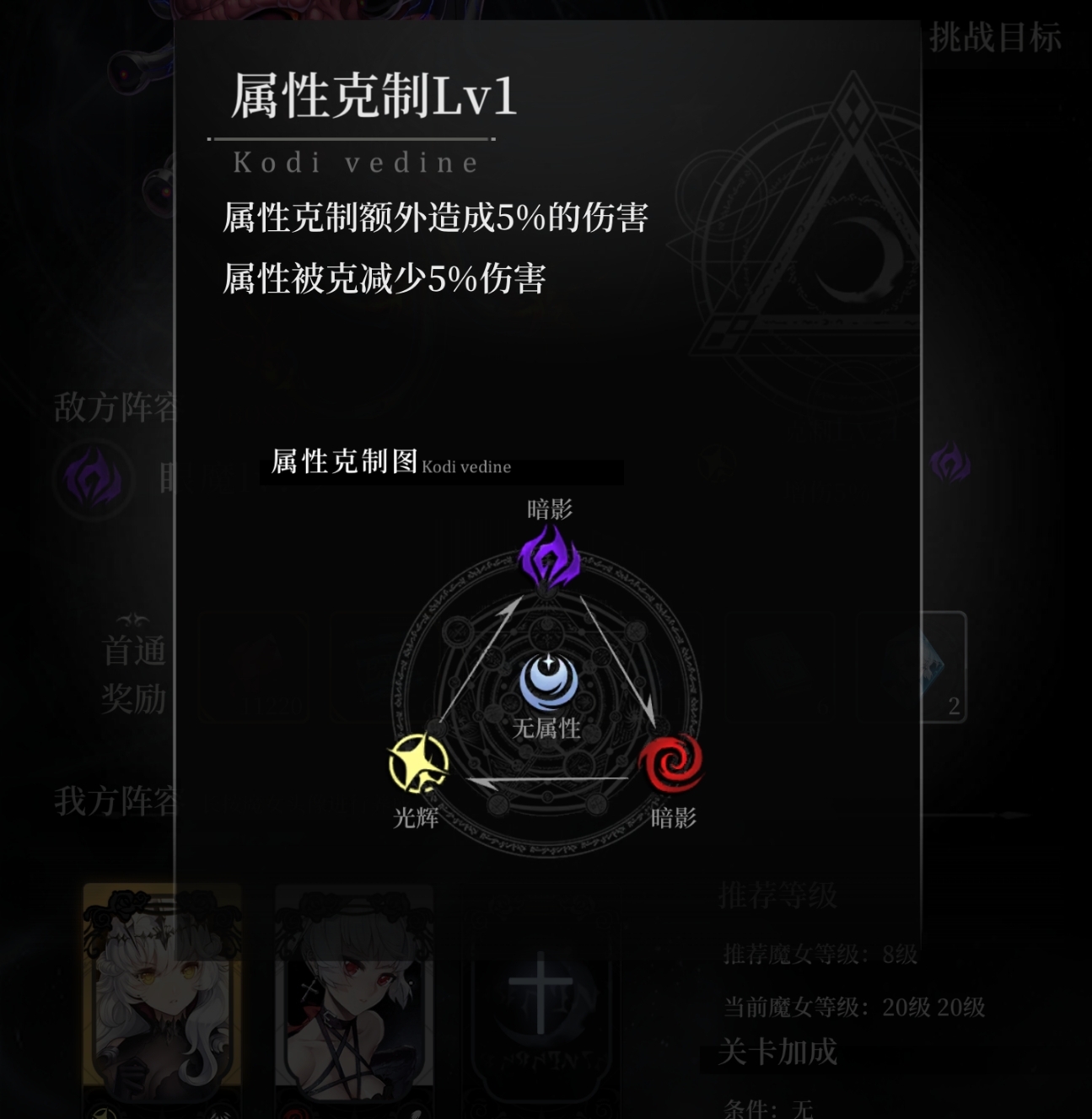 Rebirth is just the beginning, the future is a long way to go

Judging from the evaluation of players after the public beta went live, the reborn “Blast Witch” has a long way to go. In August last year, the producer of “Blow Witch” once stated that it is roughly estimated that reusable remake resources accounted for only 40% of the total volume of the game. In other words, nearly 60% of the public beta version needs to be reproduced. From the final presentation, the new version does have a lot of visible changes, but it is inevitable that many new problems will inevitably occur after completing so many content renovations in more than a year. 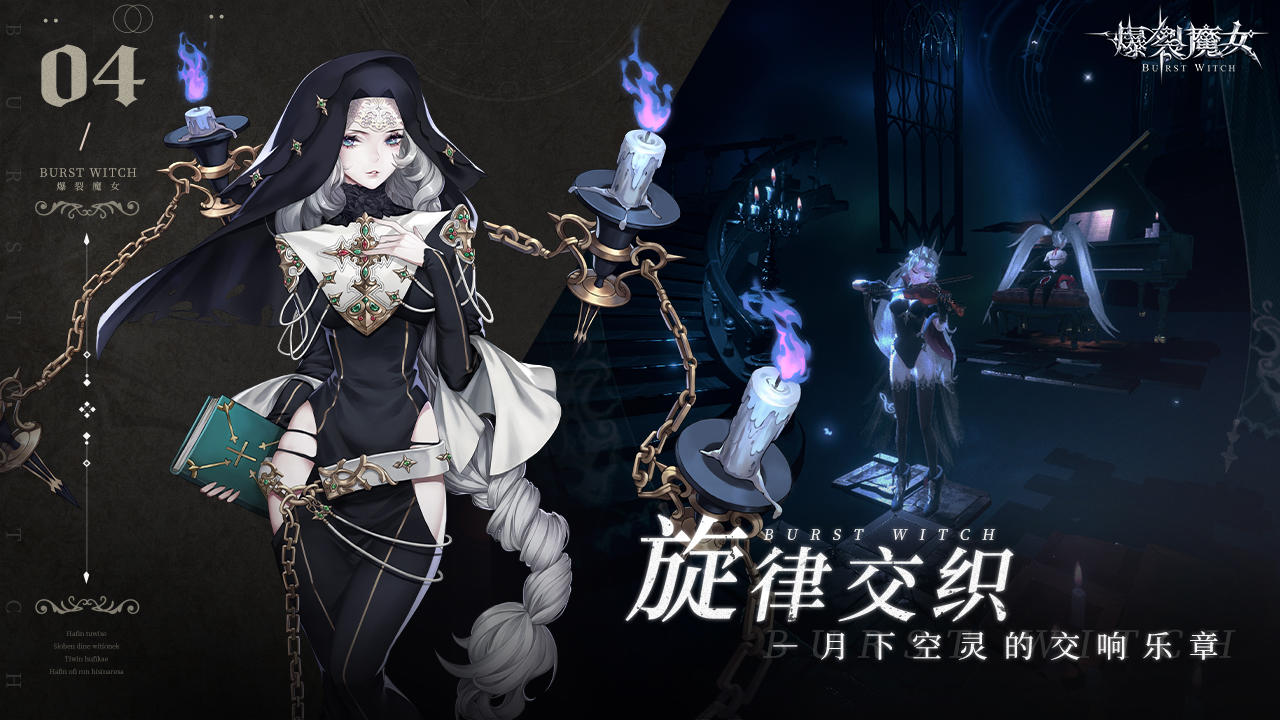 For the development team, the rebirth of “Blast Witch” is just the beginning. In the follow-up operation and maintenance, it needs to show more sincerity and hard work, live up to such an excellent audio-visual presentation, and make it truly enable two-dimensional players and STG players. All are satisfied with the product.