Stepping into the next era, the consecrated “Sword Seven” is on sale, how is the experience?

Regardless of past evaluations, the new work of Xianjian IP has always been a very fascinating thing.

Of course, this is no secret in the gaming circle, because as early as the beginning of this year, GameLook reported that “Legend of Sword and Fairy 7” (hereinafter referred to as: “Sword Seven”) was a free trial of DEMO, and related topics were still at the top. Hot search on Weibo.

Now, this domestic stand-alone machine, which has been established for 4 years and invested 50 million yuan in development costs, has finally ushered in the line. It will first launch the cube platform on October 15th, and the WeGame and Steam platforms need to wait until October 22nd. On Zhihu, the online topic is in the top ten of the hot search list, which is enough to see the expectations of the outside world for this product.

As the ninth orthodox sequel of Fairy Sword IP, “Fairy Sword VII” has made major changes in the gameplay, changing the previous round/half-round system to real-time combat, which is beyond the expectations of many old fans. And GameLook also conducted a simple evaluation of the game in the DEMO stage.

At the time, my thoughts were: This is a qualified and sincere work. It abandons the shortcomings of the previous stand-alone R&D team working behind closed doors and chooses to listen to the players’ voices frontally-which is very rare in itself; The predecessor, nicknamed “Fall of Titans 6,” the overall quality is much better.

However, due to the fact that there are fewer things released during the DEMO stage, some topic articles have not been developed. With the official launch of the game, there are no topics to talk about in the DEMO stage. Today we try to make it clear.

﻿A self-innovation “from point to surface”

“The Seven Swordsman” gives me the most “new” feeling.

This feeling is obvious, whether it is gameplay, art, or system architecture, it highlights the charm of the game different from the past. But to say that the real core change of this work, there is actually only one-real-time combat gameplay.

The reason why “real-time combat” is the core innovation of “Sword Seven” is not only because it ended the “turn-based” continuation of the fairy sword IP, but because its establishment has helped the game derive follow-up corresponding Combat, art performance, and a new system framework.

As soon as you get started, you may find that the real-time combat gameplay of “Seven Swordsman” does not follow the soul system of “Sekiro” or “Blood Relations”, nor does it take the path of mowing the grass of “Trend Three”, but more Emphasize gorgeous and free combination moves. For this reason, the official division of the role attack method is divided into two parts: skills and combos. Reasonable cooperation is the key to the player’s damage. 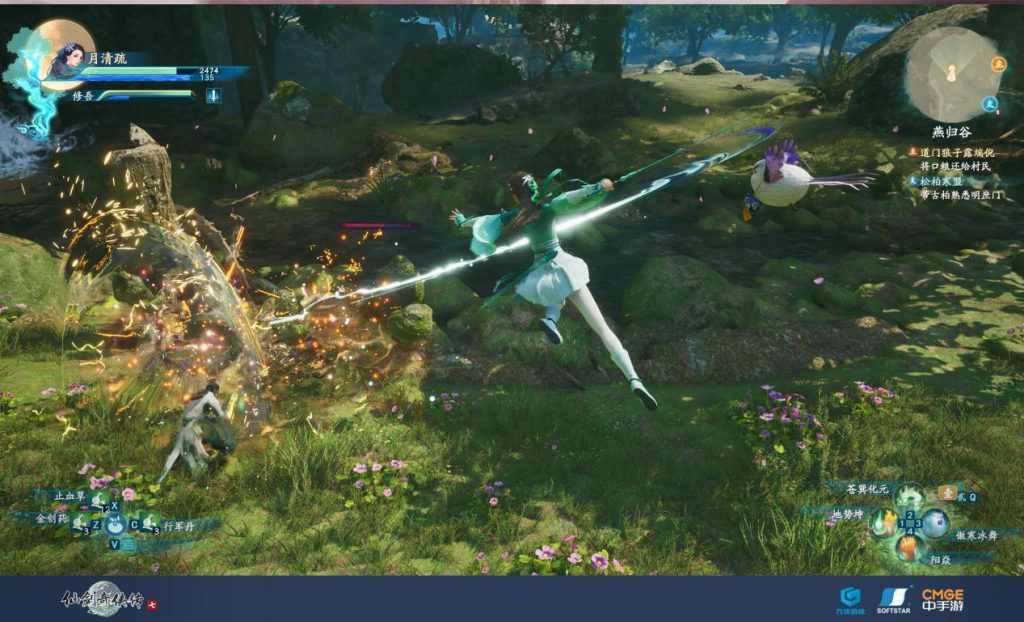 It is worth mentioning that the combo is not a simple ordinary attack, but divided into two types of attacks, light and heavy. Regular combined attacks can bring special combo skills to the battle, such as “light and heavy”. “Can pick up the enemy, “light, light, heavy” can strengthen the BUFF of the character’s skills, increase the playability, but also reduce the player’s understanding threshold, which is good for the first contact with ARPG’s “Sword” IP. Design considerations.

A more obvious point is that compared to other ARPG games, this game is slightly conservative in the concept of “action cancellation”. The release of skills and attacks often needs to wait until the character’s actions are completed, and it cannot be cancelled by dodge. You will be interrupted if you are not careful.

From GameLook’s point of view, the results of this design are different. On the one hand, it deepens the requirements for player operations and makes each move more reasonable; but from another perspective, it also makes the character’s performance more complete and guarantees In addition to the magnificent performance effect, the final actual experience is all based on preference.

The real-time battle gameplay itself requires a grand world and high-quality art as its support. This is also the reason why the team used the Unreal 4 engine to create “Sword Seven” for the first time. In the art dimension, I think there are at least two points worthy of careful study: one is that the macro scene design is more realistic, and the other is that the detail performance is balanced.

In view of the large art performance span of the previous generation, “Sword Seven” at first glance gives people (especially IP fans) the feeling, it is really “amazing”, not only the overall scene becomes brighter and three-dimensional , And the changes in trees, grasses, streams, light, etc. are all made vivid and delicate, and there is no extra sense of openness. Due to the addition of light chasing technology, the water surface texture of the game has been improved by leaps and bounds. 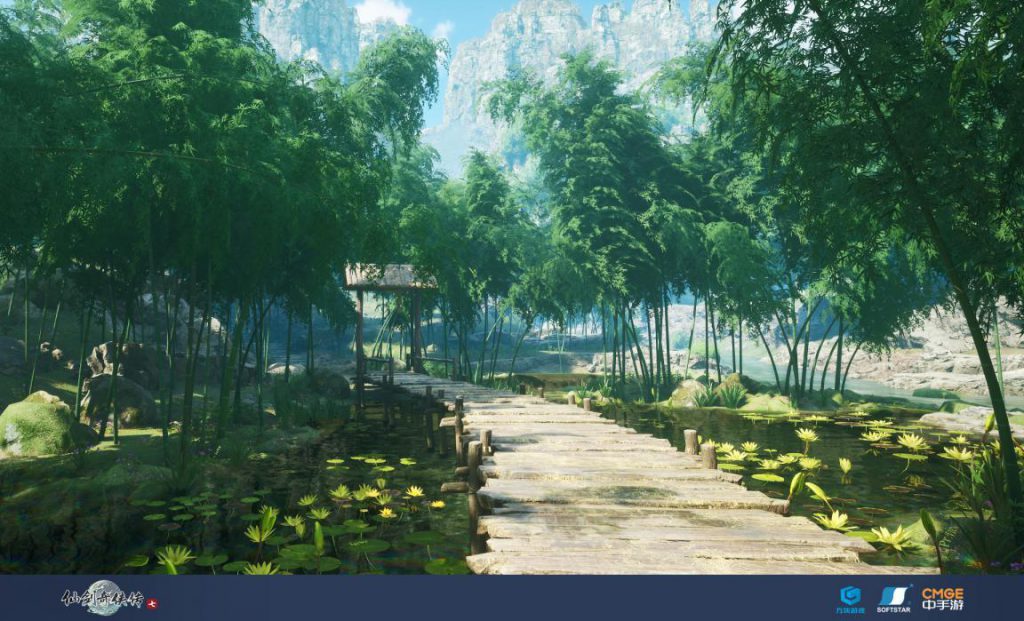 But what really surprised GameLook was the team’s reasonable and sophisticated design of the scene. For example, the peach blossoms in Novice Village grew in the aerated and permeable soil, which happened to be the environment of Novice Village. But in the rocky area outside the village, the peach blossoms are missing. It can be seen that the team has indeed made a lot of effort in setting up the scene, rather than formulating it, which increases the sense of substitution when playing. 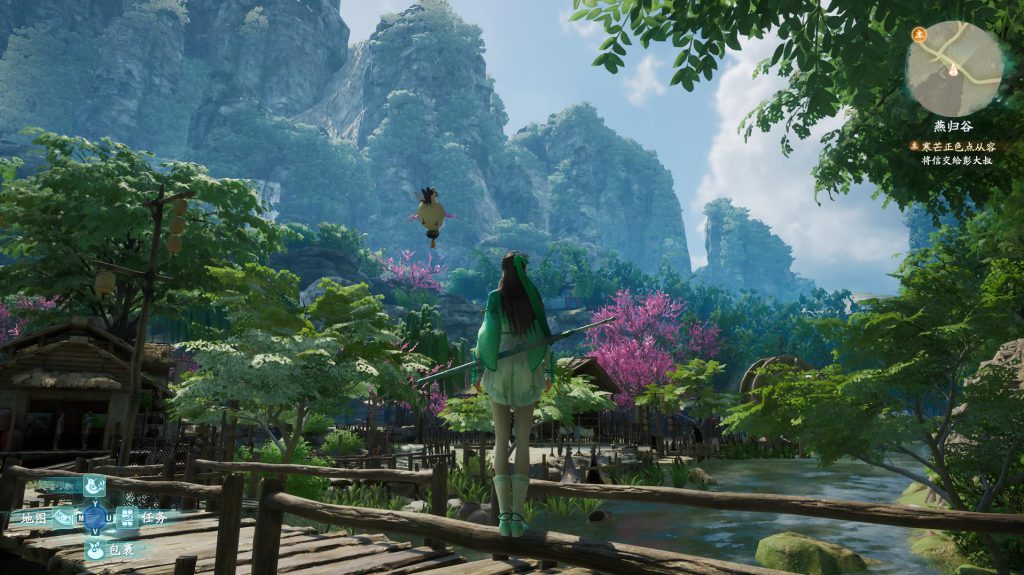 In addition, some of the details of the game are quite impressive.

The most obvious point is that if the heroine stands still for a long time, the skirt and hair of her dress will rise slightly with the direction of the wind. When encountering some emotional expressions, compared to the DEMO version, the character body There have also been more vivid changes in his micro-expressions, including frowning and pouting.

In fact, similar details also reflect all aspects of the game’s battles and plots, combined with reasonable art scene design, compared to other IP products, you can hardly say that “Sword Seven” has not made very significant progress, at least in the narrative effect It has a better form of expression.

Considering that the overall difficulty of the game is not high, even if you are a turn-based player who is too lazy to do it, you can choose to pass the level without pressure and enjoy a journey of cultivating immortals and fighting monsters, and all this makes ” “The Seven Swordsman” has become more like a fairy tale world than ever.

Love and meaning: in-depth experience design that retains the taste of the fairy sword

After talking about the superficial part, let’s talk about the deeper design of the game.

On the day the game was launched, Yao Zhuangxian, known as the “Father of the Fairy Sword”, showed up and shared his experience in the development of “The Seventh Fairy Sword”. He believes that love and righteousness have always been the emotional core of Xianjian IP, and it also fits the Chinese national spirit of unity and cooperation. Therefore, the story of Xianjian has always been a group image.

If you put it in the past, it is not difficult to understand, after all, the turn-based system has always been suitable for team combat, but after changing to ARPG, how to make the feeling of multiple protagonists fighting side by side has become a new problem. The method of “Sword Seven” is to ensure that the squad characters are on the court while allowing players to switch at any time during the battle. The rest of the characters are controlled by AI. Compared with the monotony of a single character, it can better reflect the feeling of a partner.

At the level of the story that has always been valued by players, “Sword Seven” has also returned to the framework of the story as king. In fact, as early as the beginning of the project, Yao Zhuangxian said that one of the creation goals of Xianqi was to give players a feeling of “traveling through the six worlds” similar to that of “Sword and Sword 3”.

Therefore, the stage of the story of the Seven Dynasties spans the three realms of man, demons, and gods. The old and new fairy gates such as Mingshumen, Tianshimen, and Xianxia School will also appear together. AIDS, poisonous miasma, etc. will also be presented at once. It can be said that this is a work that integrates the old and the new, further extends and integrates the worldview. 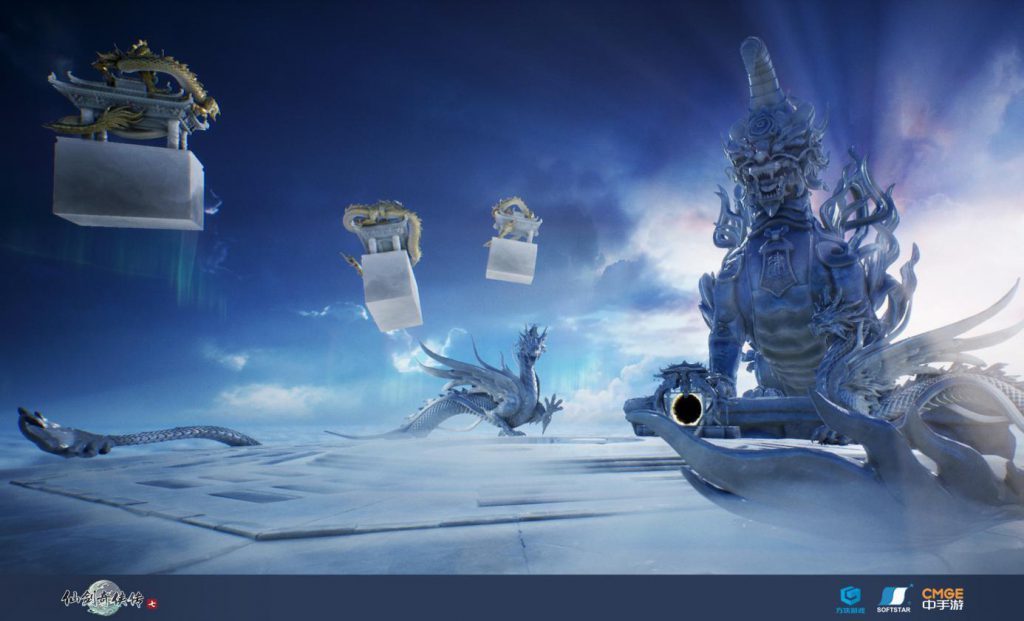 In the framework of the new and old fusion story, in order to better express the plot, the official has also made improvements at different levels. For example, we will see a lot of real-time calculus animations during the battle; in addition, the game has been renewed Introduced the “Yu Ling” system to assist in the attack, the source of which is the unique stunt of Li Yiru (the daughter of Li Xiaoyao) in “Sword 2”.

Similarly, most NPCs in the game have independent dialogues, and some of them can also conduct independent dialogue interactions. It is worth mentioning that there is only one chance for the choice of dialogue, and the result cannot be changed. From this, the author not only likes to feel the joy, anger, sorrow and joy of the mainline characters, but also lingers about how those humble NPCs who have their own personal settings will respond.

At least in GameLook’s view, this is the fairy sword world with “sentiment and righteousness”. 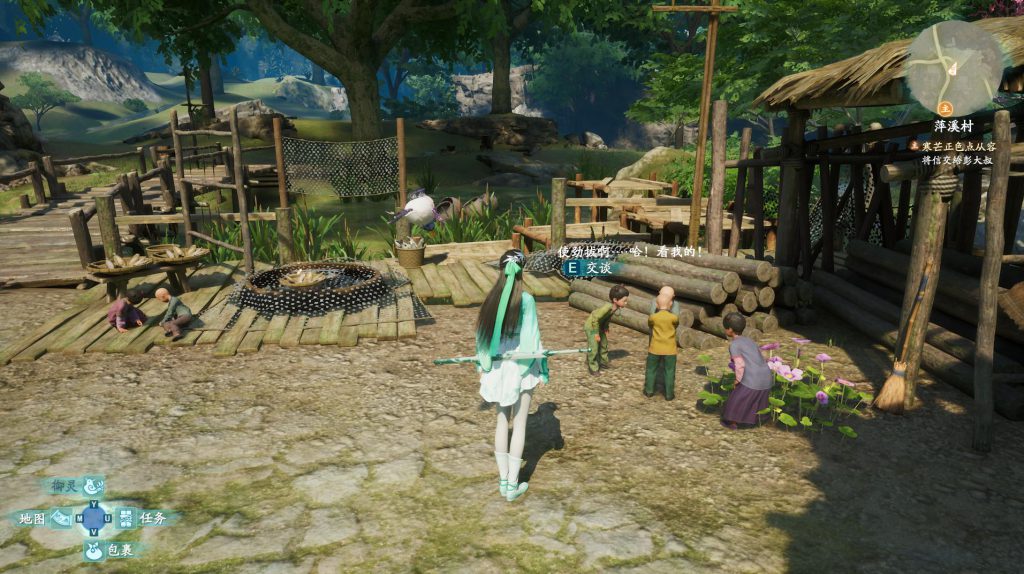 As early as before the official release of “Sword Seven”, I have heard many players complain that this is an “undecent” fairy sword work.

For example, it’s okay to like to make some new tricks on the packaging, so that a middle-aged man in his 30s died on the spot in the process of picking up the express, but in the end, Jizhongshengzhi successfully justified his child with his own child. 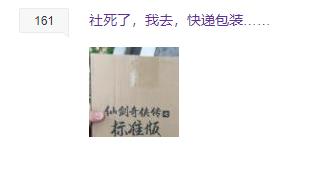 Another example is not knowing what spells were cast, allowing some players to pass the level on the day of the release. 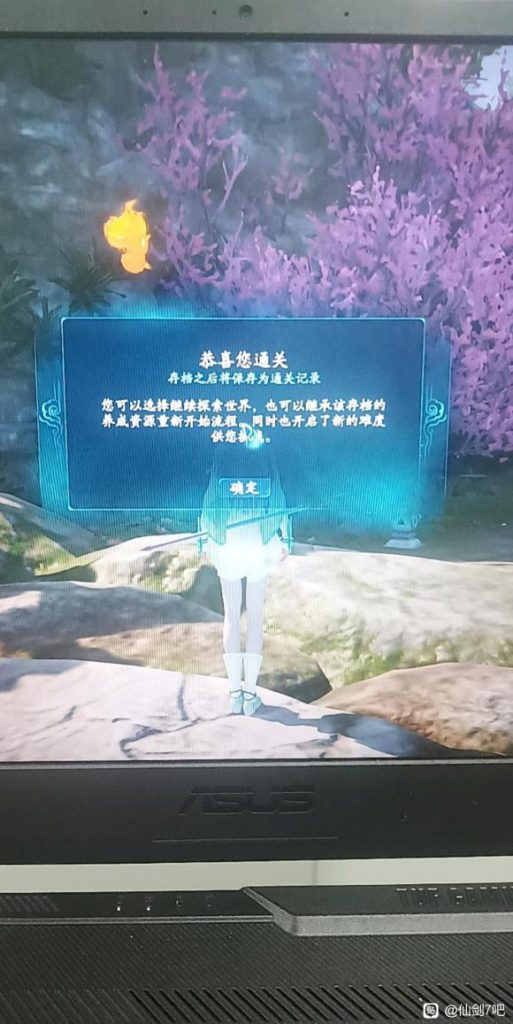 Of course, the most “undecent” complaint from players is actually why the game changed the turn-based system to real-time combat. 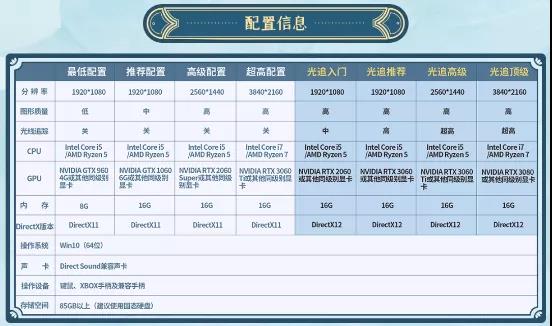 But the indisputable fact is that before the release of “Sword Seven”, two of the three domestic swords have completed the transition from turn-based to real-time combat. Behind it is the result of the changes in the social environment-in the era of fragmentation, ” The idea of ​​”go to turn-based” is obviously more in line with the increasingly fast-paced player’s tonality, and it also has a wider audience, which can better help IP break the circle. 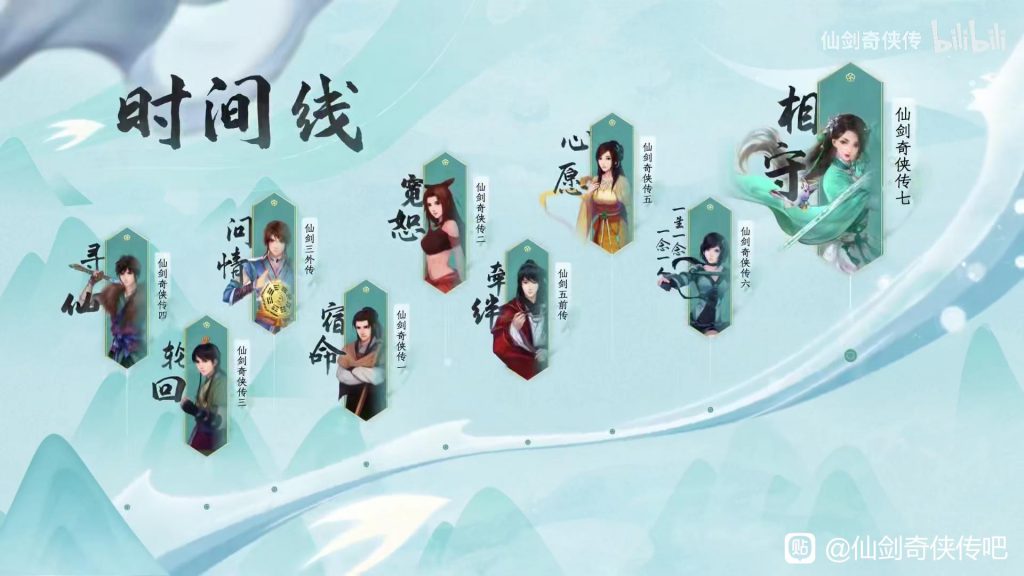 As an IP for more than 20 years, Xianjian has been losing market vitality for more than a decade. Feelings are worthy of nostalgia, but only those that can adapt to the market can finally become an eternal classic. Therefore, we see the attempts and innovations made in gameplay and art in order to keep up with the times in this year’s “Sword Seven”.

Regardless of the future results, “Sword Seven” dared to move in this direction, this is something worthy of encouragement.