Aurora report: Byte is the first time for APP users to win the championship in Q3, and the penetration rate of mobile games reaches 2.6%

GameLook report/As a well-deserved giant in the short video era, Bytedance and its subsequent development have always been the focus of attention both inside and outside the industry. At the end of last month, Byte announced that TikTok’s overseas monthly active users have reached 1 billion, which is about 1/3 of Facebook. For the emerging byte, this achievement is really worthy of joy.

But soon, BYTE ushered in the second good news-according to the “Q3 Mobile Internet Industry Data Research Report for 2021” released by Jiguang, in the domestic market in Q3 2021, the use time of BYTE APP users surpassed for the first time. Tencent series, topped the list.

Specifically, in July and August of Q3, Tencent still led the market with a slight advantage of 0.7% and 0.1%. In September, Byte won the end with a 1% gap in the user market share. As for Ali and Baidu, they maintained steady growth.

For the first time, the proportion of time spent by BYTE APP users reached the top, and a large degree of it may be attributed to environmental factors: the hosting of the Tokyo Olympics. The Tokyo Olympics will be held from July 23rd to August 8th, which coincides with the first half of the Q3 quarter. After August, the popularity began to decline.

During the game, this global event contributed a huge amount of traffic to the content industry, and aroused a wave of DAU peaks in the comprehensive news industry where the scale of user activity is declining, especially on the 3rd of July when the Chinese team’s dominant project debuted. , 4 weeks, the growth rate of DUA was 1.6% and 1.8% respectively

In terms of per capita daily usage time, July-August was 95.3 minutes and 97 minutes, respectively, a substantial increase of 27.9% and 31.3% over the same period last year. The impact of Olympic events should not be underestimated. 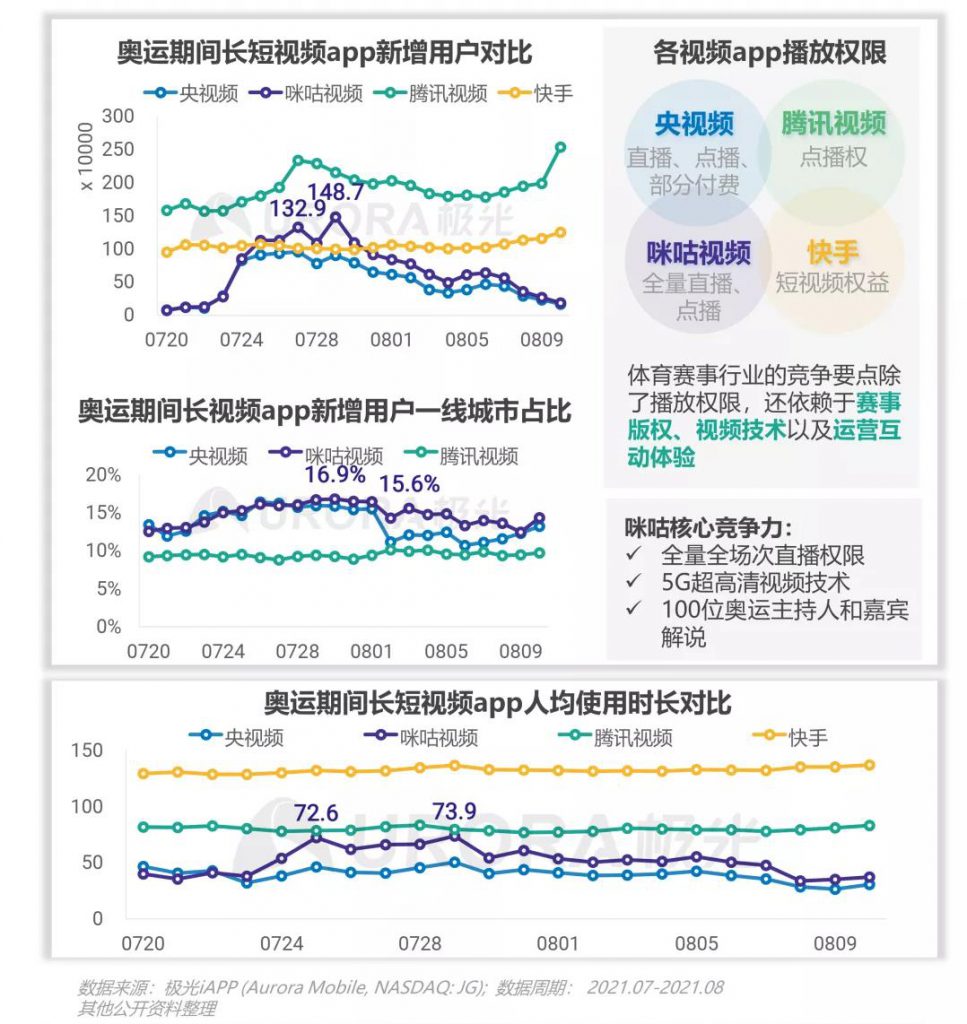 In fact, the influence of the Tokyo Olympics has spread to the field of long and short videos. For example, Migu Video, which has the right to live broadcast, has newly added 1.49 million users, surpassing Kuaishou. And Tencent Video is similar, and has achieved very obvious user growth.

In terms of per capita usage time, Migu is approaching Tencent Video and is more favored by users from first-tier cities. On the whole, Kuaishou’s user growth is not significant, but it still occupies the bulk of the content creation system over the years. Relatively speaking, short video has a shorter and effective stimulating experience, which meets today’s fragmented needs. Compared with watching a complete Olympic event, it still has a strong competition. Taking the entire quarter as a sample, the proportion of Q3 short video users’ daily usage time increased by 1.8% year-on-year to 31.6%, the highest value in the past 5 quarters. In other words, short video is becoming a product for more and more users to kill time. However, mobile games have rebounded by summer vacation, reaching 6.3%, but due to policy influences, it has dropped by 1.5% compared with the same period last year.

In addition to short videos and mobile games, other categories include instant messaging, online videos, and comprehensive news, and the proportion of their user time has dropped. In terms of daily usage time, the average daily usage time of mobile app users per capita increased slightly from the previous month to 5.5 hours, an increase of 6 minutes year-on-year, or it was due to the cultivation of users’ digital lifestyle habits during the epidemic. 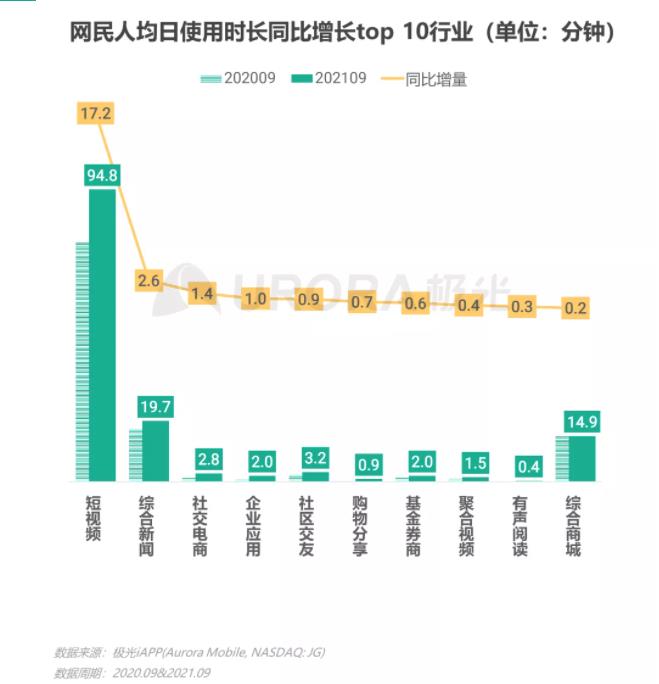 More specifically, short video is still the industry with the highest percentage of time spent by netizens in a single day, reaching 94.8 minutes, an increase of 17.2 minutes from September last year, ranking first among all industries, followed by comprehensive news and social e-commerce industries. 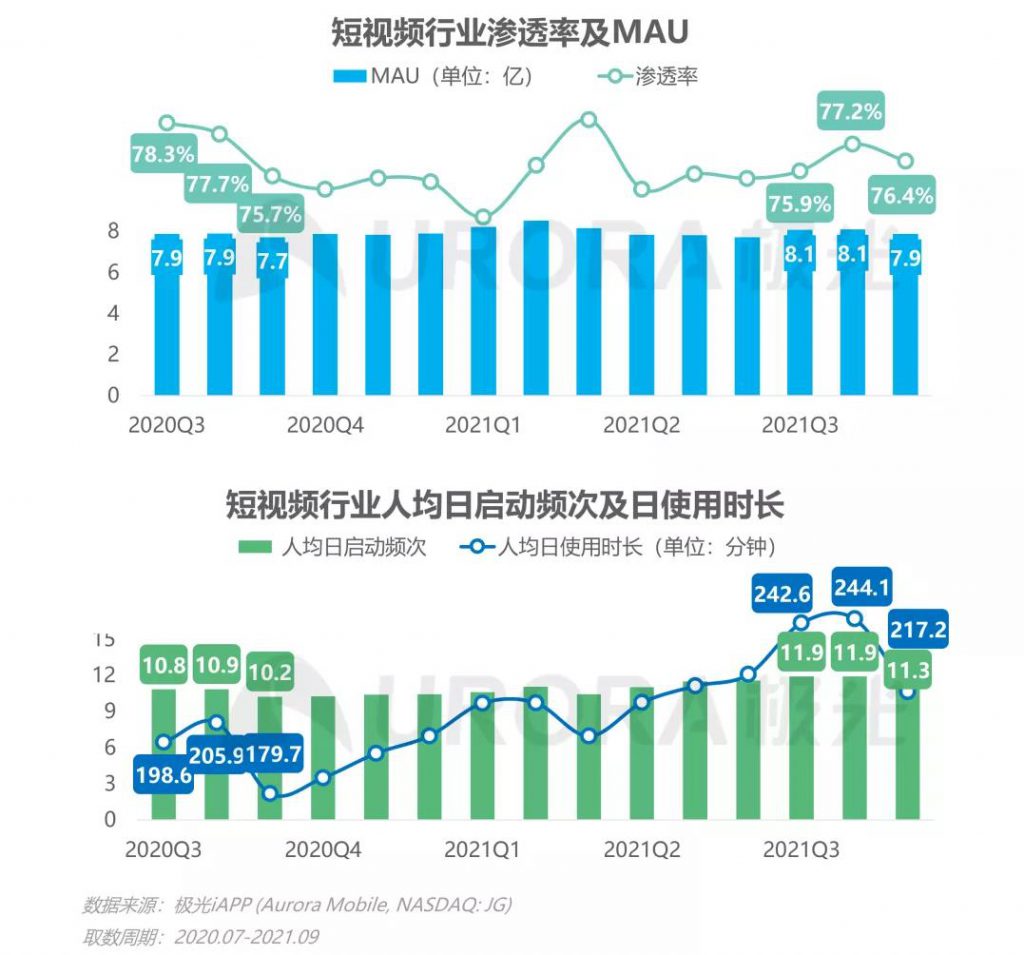 Judging from the average monthly active value, short video reached 800 million people in Q3, an increase of 2.6% year-on-year, and the penetration rate reached its highest peak in August at 77.2%, and then began to show a downward trend, indicating that the short video industry still has room for incremental growth. There are quite a few. 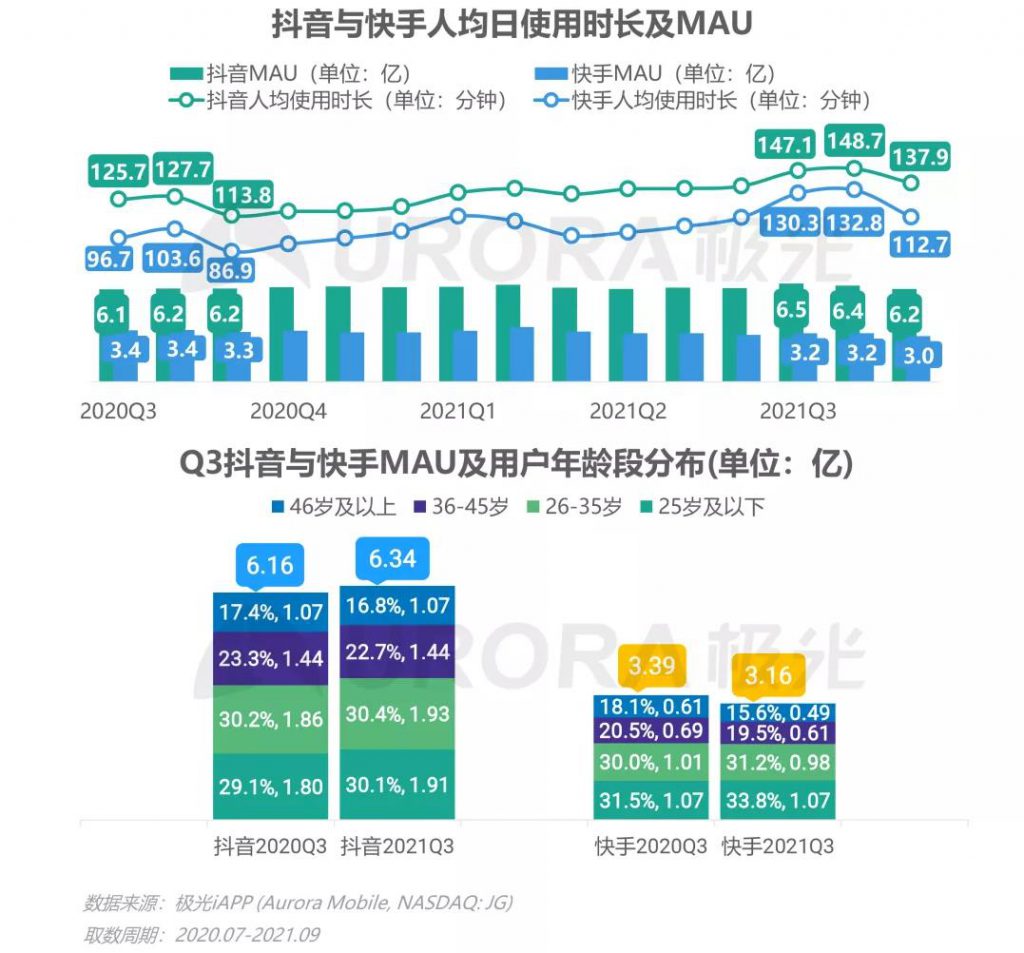 Both Kuaishou and Douyin have improved their daily use time per capita to varying degrees. Although there is still a certain gap, the gap is gradually narrowing. The average daily use time of both users has narrowed to 19.3 minutes.

In terms of user age distribution, this year’s Q3 Douyin 26-35 year-old users accounted for 30.4% of the majority, while Kuaishou was even younger. Users under 25 accounted for the largest proportion of users at 33.8%. There was not much difference last year. 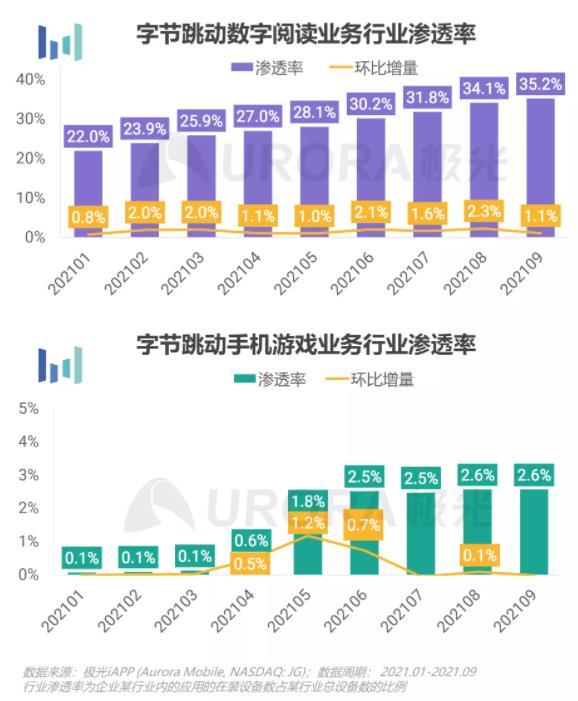 With the gradual peaking of short video traffic, Byte has also begun to explore more areas. For example, in terms of digital reading, Byte has reached the highest market penetration rate of 35.2% in Q3 this year. Similar to the Tencent Reading Group, deep digging into digital reading can bring many benefits to Byte: on the one hand, it can incubate its own IP to lay the foundation for subsequent business development; on the other hand, it can use the byte system to lead each other in the user pool. , Expand the entire user ecology.

In terms of games, the byte holding the purchase channel is also showing ambitions. From the data point of view, the penetration rate of Byte’s mobile game business was only 0.6% in April 2021, and it soared to 1.8% in May. Behind the data, Byte’s agency and acquisition are indispensable.

In the middle of this year, Byte acquired Youai Huyu and Mutong, which helped it further expand its mobile game business. At the same time, the “One Piece Hot Blood Route” represented by its agency has also successfully dominated the mobile game best-seller list for a long time. Byte’s series of actions were reflected in the data, and finally it maintained a very stable market penetration rate from June to September.

Google Play’s annual game awards are announced. Who is the winner in the three major markets of the United States, Japan and South Korea?