With the release of the official version of Windows 11, a question arose – where did the most exciting new feature “Android Subsystem” at the press conference go? Fortunately, Microsoft did not let users wait too long. On October 21, Microsoft announced through a blog that the first Windows 11 preview version containing the Android subsystem had been provided to the Windows Insider program participants of the Beta update channel in the United States.

Although it is only a small-scale early test, the eager technology enthusiasts have found a solution for the first time. The Android subsystem has been successfully installed and run on the official version, Beta version and Dev version of Windows 11. A large number of domestic Foreign Android applications have successfully achieved their debut on Windows 11.

According to the official introduction, the Android subsystem includes the Linux kernel and the Android 11 operating system based on the Android Open Source Project (AOSP) version. This subsystem runs in the Hyper-V virtual machine, and the operating logic is consistent with the Linux subsystem, so it has a more efficient, in-depth, and complete underlying simulation than general simulators, which can achieve better performance for Intel, AMD and Qualcomm CPUs. support.

In the user interface, the Android subsystem is significantly different from the Android version currently popular on smart phones or the customized UI of various manufacturers. Its overall design concept fully follows the design language of Windows 11 and the operating characteristics of the PC. The visual presentation is more like a UWP native application that comes with the Windows system. 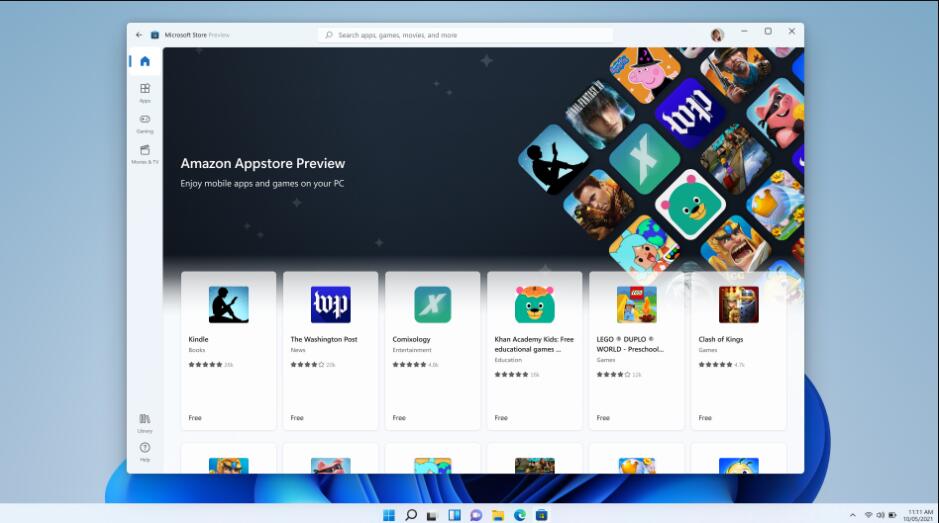 Prior to this, Microsoft has officially announced that it will cooperate with Amazon to provide apps for the Android subsystem through the Amazon Appstore. Currently, the first 50 officially verified Android apps are on the shelves, covering various types of popular apps such as Kingdom Era and Kindle App. However, for domestic early adopters, this is not a stable and reliable application acquisition channel. Fortunately, the Android subsystem of Windows 11 also supports the side-loading function. After the developer mode is turned on, the user can directly install the local APK installation package.

In this way, some domestic netizens successfully installed the Antutu benchmarking software and were surprised to find that AMD’s sub-flagship desktop CPU Ryzen 7 4800H released last year has surpassed the rumored next-generation Qualcomm in CPU benchmarks. The flagship mobile CPU Snapdragon 895. This not only means the PC’s “dimension reduction attack” on mobile phones, but also shows that the Android subsystem has realized the full release of desktop CPU performance. 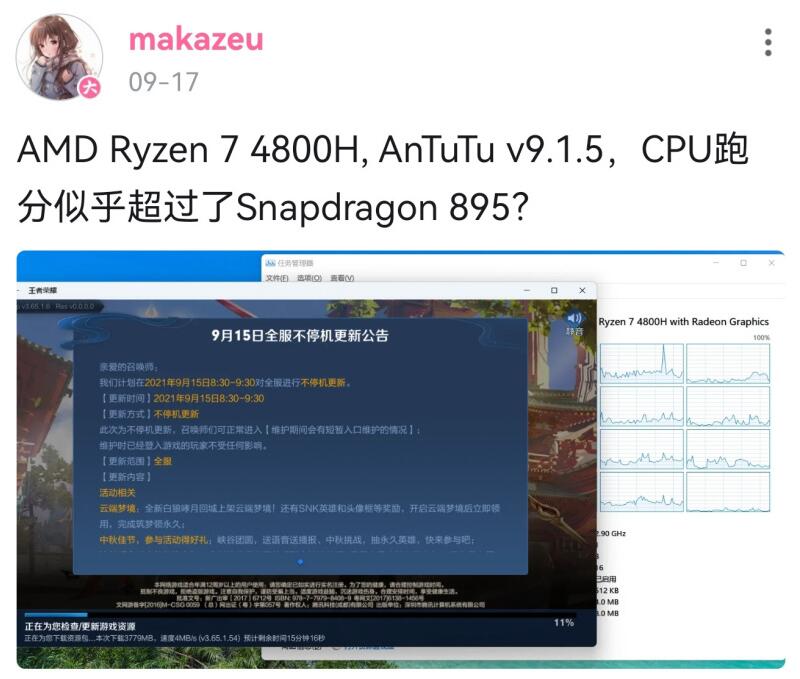 3D game performance is not good, GPU scheduling urgently needs to be optimized

However, although netizens report that Intel and AMD CPUs have achieved a relatively perfect performance release in the Android subsystem, the performance of the GPU is quite unsatisfactory.

Some netizens said that Nvidia’s GTX 2060 graphics card has an Antutu GPU score of only over 120,000 on the Android subsystem. This level is roughly equivalent to the Kirin 980 chip released by Huawei three years ago, and Qualcomm’s current strongest Snapdragon 888 The GPU running score of the Plus chip has reached 320,000 points.

Not only is there a huge gap in running scores, but in actual applications, the lack of calls to the GPU by the Android subsystem also directly affects the smoothness of the game. According to feedback from netizens, for 2D-based games, such as “Azur Lane”, the Android subsystem can run stably and smoothly, while for “Tomorrow’s Ark” with certain 3D elements, there is a more serious lag phenomenon. In this regard, this netizen also bluntly said that the current resource scheduling situation of the Android subsystem can be described as “the CPU is diligent and the GPU is too lazy to move.”

In general, the design concept and actual performance of the Android subsystem of Windows 11 are significantly improved compared to traditional emulators, especially in terms of CPU performance release, which completely eliminates external doubts about the “shelled Android emulator”. With the increasing popularity of touch-screen PC devices, the Android subsystem will become more practical in the application scenarios of ordinary consumers in the future. Therefore, it is also expected that Microsoft can solve the GPU call problem of the Android subsystem as soon as possible, speed up the adaptation of Android applications, simplify the operation process, and allow ordinary consumers to enjoy the convenience of cross-platform collaboration as soon as possible.

56% of organizations have experienced ransomware attacks