Board game market report: annual revenue of 7 billion US dollars, which gameplay is the most profitable?

Reported by GameLook/As the fourth largest category in the mobile game market, board games may be the most popular category with the least attention. However, global social isolation measures have laid the foundation for the growth of chess and card games in terms of user volume and income.

In the United States, although the outbreak of the epidemic has led to the closure of nearly 1,000 chess and card companies, social chess and card games have ushered in rapid growth. According to market research company Statista, global social board games revenue in 2020 reached 6.2 billion U.S. dollars, and it is expected to increase to 7.5 billion U.S. dollars by 2026.

Head games in this category can get a high income, but in the next year, it will become more difficult to get big R users. The market has seen more changes and competition, because traditional board game companies have also joined the market.

Fortunately, success is not a question of probability. Marketers can use market data to make long-term strategies and activities, turning each game time into an opportunity to promote usage and loyalty. They can also try more mechanisms and functions to provide players with more rewards in order to increase user engagement and promote in-app purchase revenue growth.

From the perspective of purchase cost, the average CPI of social board games is $7.21. It reached its highest point in November 2020, and the average cost per installation was $7.63. From the platform point of view, the average CPI of Android social board games is $5, which is more than twice lower than that of the iOS platform. In terms of return on advertising investment (ROAS), the return rates of social board games on the 7th and 30th are 11.12% and 25.18%, respectively. The performance of the two platforms is very close, but the 30-day return rate of the Android platform is higher than that of iOS. In addition, the CPI of Latin American social board games is as low as $1.43, but from the perspective of the return on advertising investment, the North American market with a cost per installation of $10.37 is still very attractive.

The following is the report content compiled by GameLook: 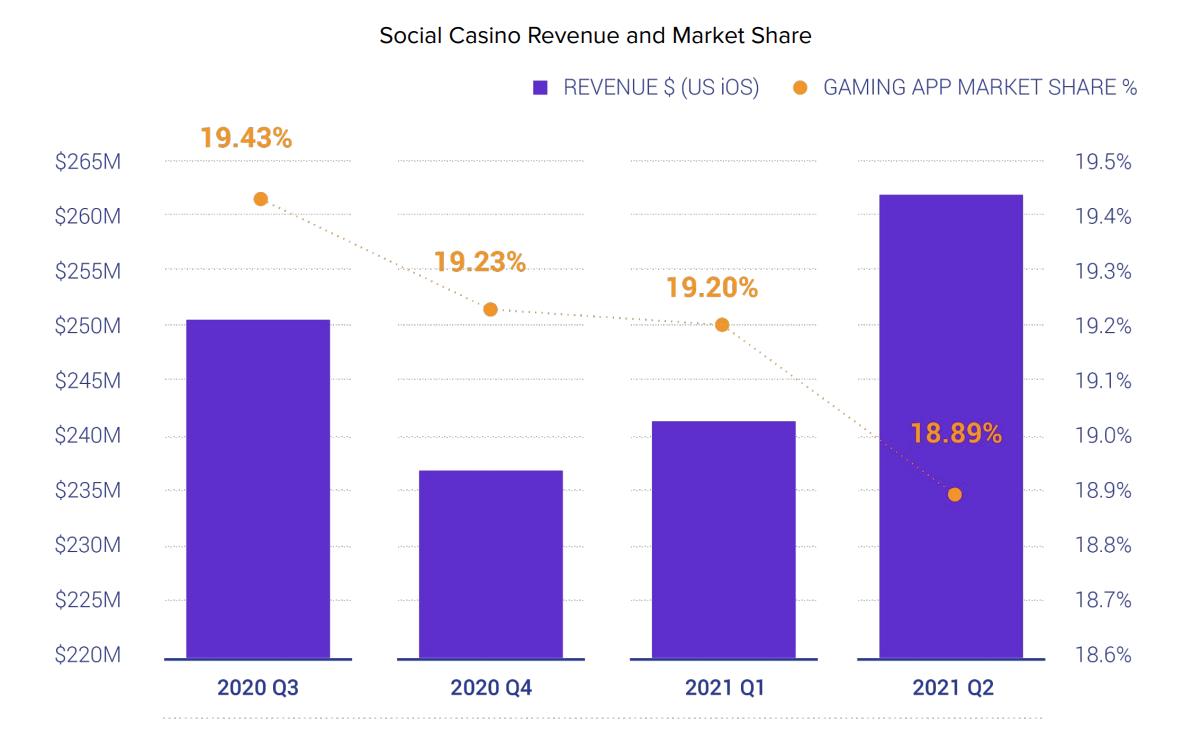 The report shows that in the year between 2020Q3-2021Q1, the revenue of social board games in the United States exceeded $1 billion. However, from the perspective of trend changes, the proportion of social board games revenue in the US application market has continued to decline in the past four quarters, reaching 18.89% in 2021Q1.

From the product perspective, it is difficult for newcomers to grow on a large scale in this saturated market, and winners can maintain their top positions for a long time, but the barriers to entry are high. In the past year, none of the top 200 social chess and card categories has been sold. Most of the new products are old games that have been released for more than 5 years.

Saikala Sultanova, senior director of the company said, “Players are spoiled for the choice of high-end equipment to consume high-quality content, which will raise their expectations for the quality of the game. The buying team needs to generate high-quality stories related to the Creativity to meet this user’s needs.”

Buying trend: Finding paying users is more than just a matter of luck

The installation cost in 2020 is high, but the purchase price has dropped in 2021. In April of this year, the lowest purchase cost of social board games reached US$6.25, but it quickly increased to US$7.31 in July. Return on advertising investment (ROAS) is a test of marketers’ courage, but social board games still have relatively good returns on the 7th and 30th. 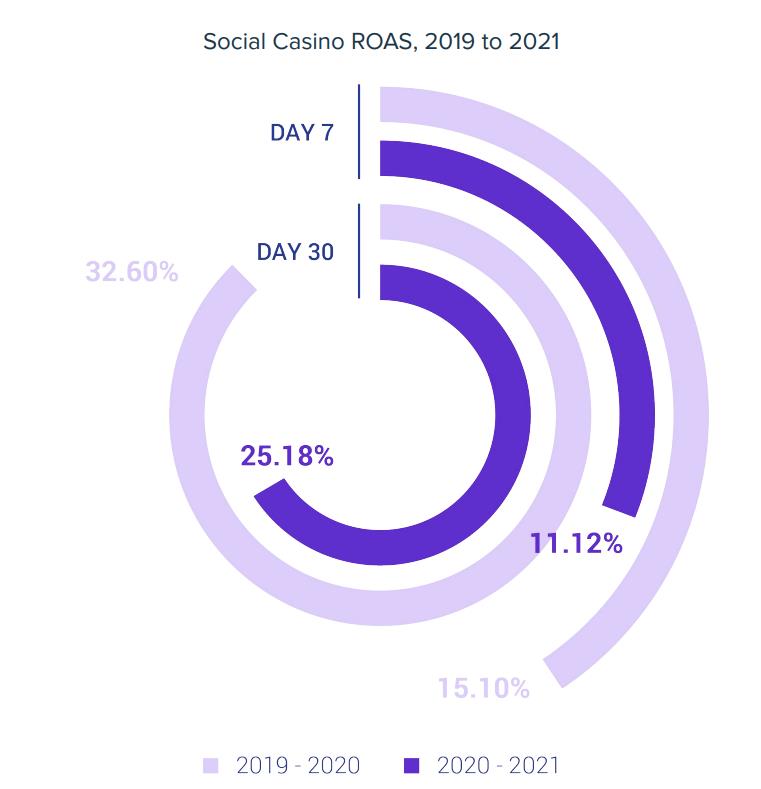 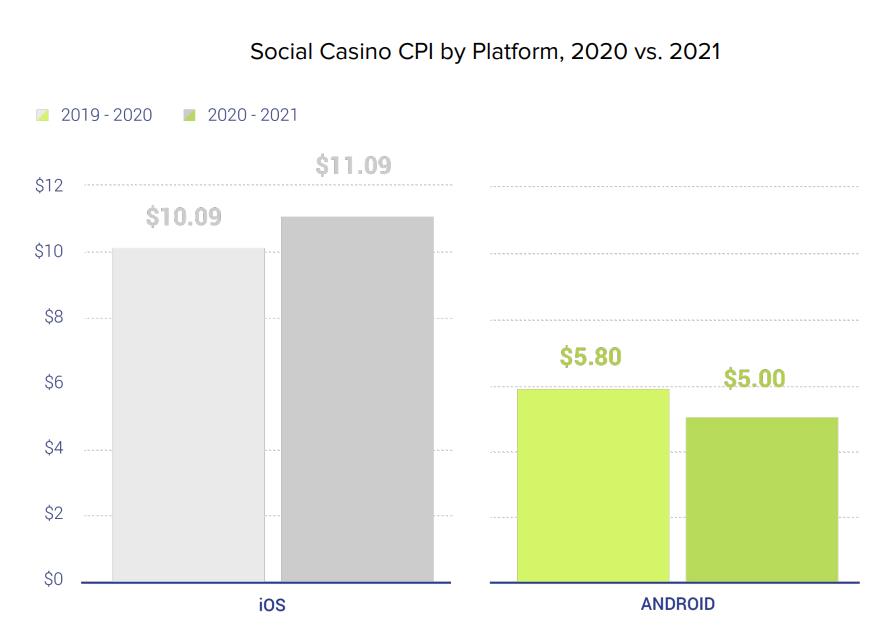 From the perspective of customer acquisition costs, the purchase of social board games on iOS is more than twice as expensive as on Android. Overall, the purchase cost of social board games has increased, but the gap between iOS and Android has widened. The CPI of this category on the iOS platform is 122% higher than that of Android. In 2020, the gap is still Only 74%.

Compared with the same period of last year, the cost of acquiring a user for social board games on the Android platform has been reduced by 13.7% to US$5; the CPI of the iOS platform has increased by 9.9% year-on-year to US$11.09. It is obvious that the ATT policy has led to a change in advertising consumption habits.

However, in terms of revenue, the ROAS of the two platforms are evenly matched. 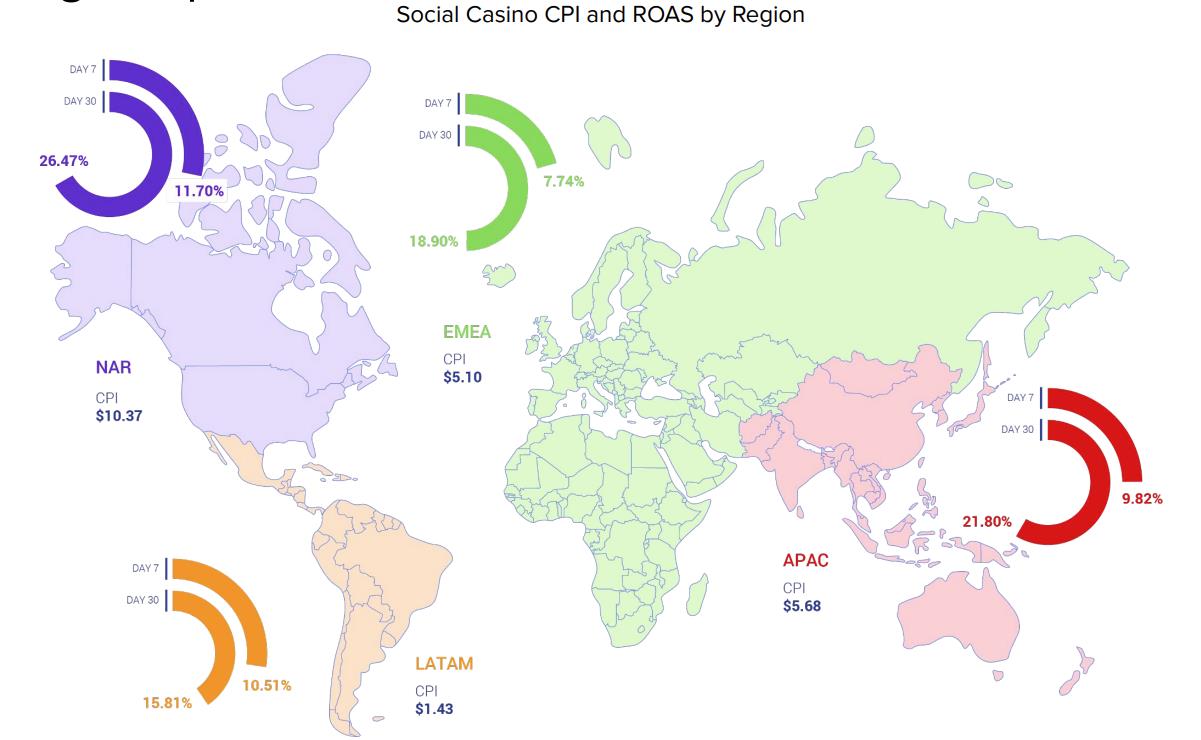 The 5 most popular playing functions of social board games

From the survey of the top 100 games in the category, the most popular features of social board games are collection, Battle Pass, guild, piggy bank and special mode. 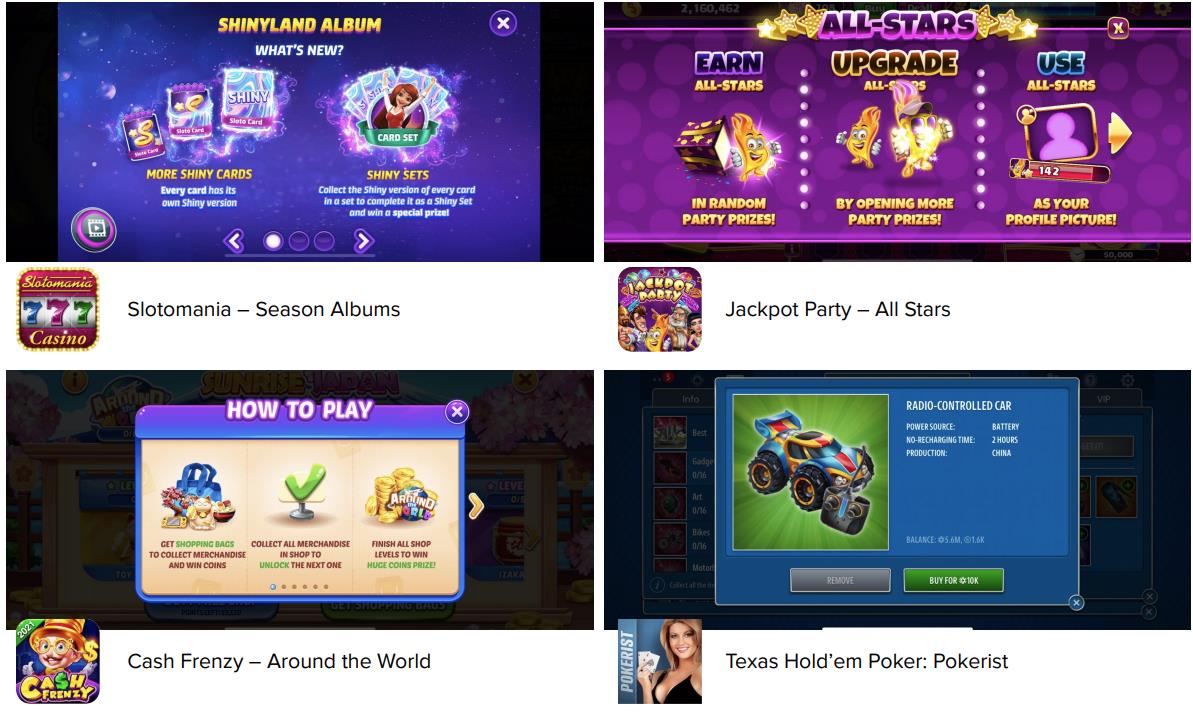 Among the 5 main functions, collection is the most popular (74% of head products used) and the fastest growing (the number of head products used has increased by 39 year-on-year). Through collection, users can get extra rewards while obtaining rare items. This does not affect the core gameplay, and it is a flexible way to increase the sense of game progress. 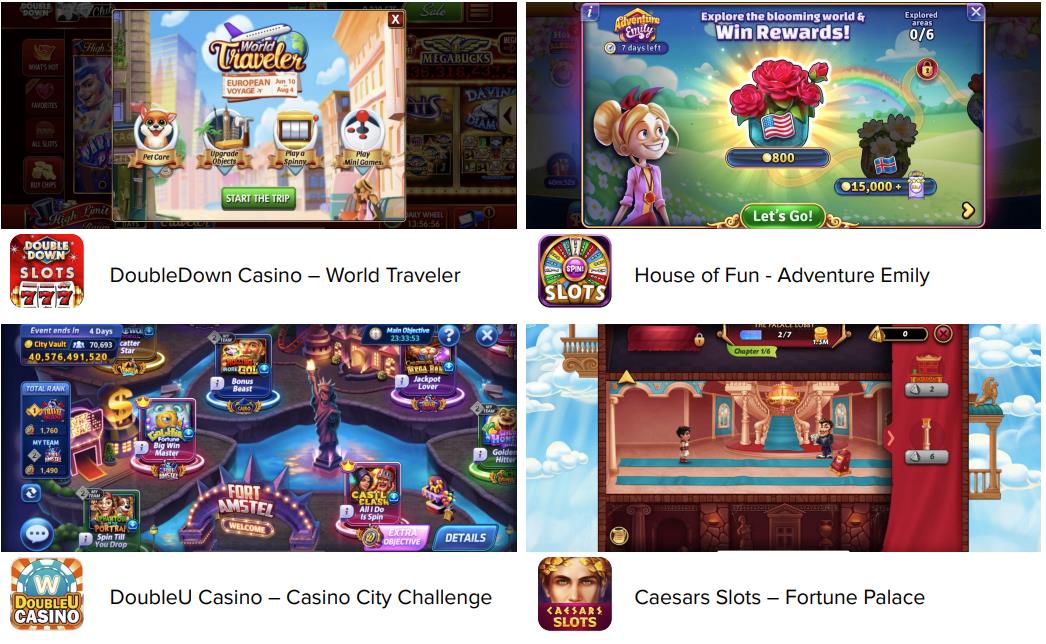 Recently, the emergence of special modes and activities has transformed slots and bingo from simple gameplay to a more diversified experience. The special mode brings additional content levels to the game from a single dimension. Generally speaking, the special mode is linked to the core gameplay in the form of game ratios or resources. For example, by rotating slots, players can obtain resources to improve the progress of the special mode.

With the addition of special modes, social board games have formed a more complex ecosystem through plots and gameplay. More and more games have begun to use special modes. In 2021, 71 of the top 100 games have joined this mode. 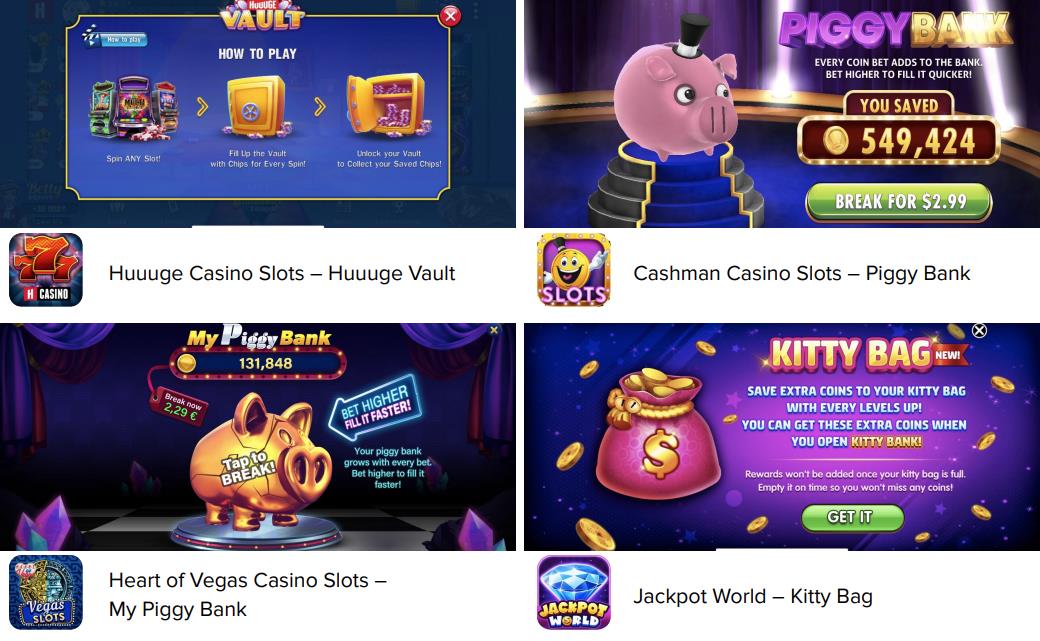 The piggy bank system is an effective monetization and participation enhancement tool. Users continue to increase their savings by playing games. Once the deposit is full, you can buy the content at a very low price. In the social chess and card category, there is not much difference in the design mode of this function, but simplicity is the advantage. 70 of the top 100 games have this function.

Since social board games are more for casual players, the guild mechanism does not have to be as complicated as moderate games. On the contrary, the existence of guilds is to increase social participation and give players the opportunity to play and chat with other people. The guild mechanism is the basis of other social functions, such as cooperative tasks, team competition, and so on. Almost all board and card game guilds will give members the opportunity to ask for help and provide a closed chat space. In board games, these are the minimum requirements for guild functions. Among the Top 100 games in this category, 42 games have joined the guild gameplay. Many head games also deepen the guild gameplay, such as union activities, public tasks, competition, and unique gameplay modes that use cooperative and social elements.

Battle Pass can increase the sense of progress between single games, and it can also bring players a sense of accomplishment. The penetration rate of this feature in social board games is not so high, accounting for 36%, but it has also increased significantly from 5% in 2020. 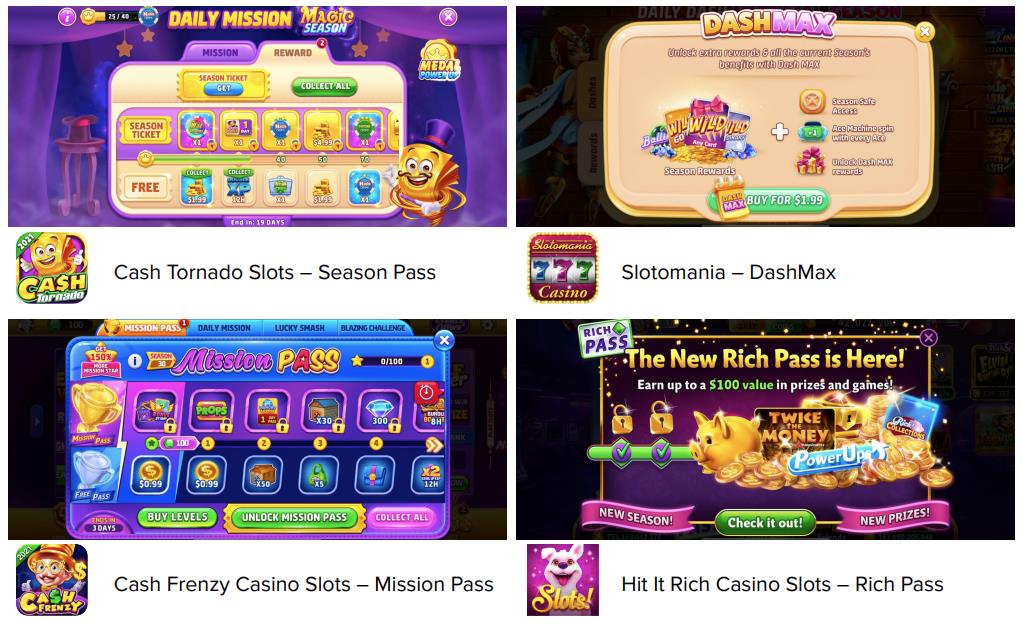 The Battle Pass design in the head chess and card game looks very similar: both provide a large number of opportunities for players to obtain additional rewards while playing games, and bring opportunities to accelerate progress for players who want to quickly increase the value.

There are two forms of game monetization: 1) Direct monetization: directly pay for the Battle Pass to unlock more advanced rewards. It is a bit like a subscription, and there will be a new pass to buy every season; 2) Indirect monetization: With the participation of players As the degree increases, they have more opportunities to see other in-app purchase options in the game.

Liftoff senior marketing manager James Haslam said, “The revenue growth of the social chess and card category, but the fierce competition and the current marketing situation make it difficult for such games to be profitable. To succeed, marketers and product teams need to experience the belt in advertising and in-game Come more excitement.”