Ten years ago, for a senior ACG mansion, there were many answers to this question. It could be the first-generation cute king Kinomoto Sakura, or it could be Saber, the eternal hairy king in the moon world, or even three-dimensional. The seiyuu Yugimiya Rie, who is famous for her tsundere eldest lady’s voice.

But in the current context, there is only one solution left to this problem-a slime named Limru.

On October 28th, the two-dimensional 3D combat mobile game “About My Rebirth and Becoming a Slime: The Founding of the Demon King and the Dragon” (hereinafter referred to as “Slimes”) developed by Bandai Namco in the world The service was launched in several countries and regions, and quickly reached the top of the Japanese App Store free list, and also ranked among the top ten in Japan in terms of best-selling list, and continued to rise at a rate of 20 to 30 in the United States, South Korea and other markets.

Like novels and animations, slime mobile games are continuing the unstoppable brilliance of this super IP with a phenomenal performance.

Promotional videoThe lightly changed track in the roll, finally waiting for the king of cuteness

Those who are familiar with the two-dimensional industry in Japan are not unfamiliar with the concept of ACGN. Compared with the animation, manga and games represented by ACG, the light novel represented by N is quite sweeping in the industry. In terms of creation cost, light novels are undoubtedly the lowest of the four forms. The extremely high fault tolerance rate makes them the “academy” of the entire industry. Only light novels that stand out from the fierce competition can they do everything step by step, from comics to animation. And then to the game, accept the hard work of the market. And when there are really hot styles, light novels themselves are “fucked away”, and often only heavy fans will pay attention.

Beautiful girls have almost become the standard for light novels

However, it is precisely because of the extremely low creation threshold of light novels that the light change track has fallen into endless scrolling. In order to attract attention, the polishing of content and worldview gave way to pornography, so that the flood of crossing and reincarnation works basically maintained a combination of Long Aotian male protagonist + many beautiful girls harem, too routine The plot and character design have allowed the fans of the second dimension to select works such as the “Four Great Classics”. Of course, the “Four Masterpieces” here is negative, meaning that the plot development is too “classic”.

Just as ACG fans complained that the industry is over, the arrival of “Rebirth Slime” undoubtedly brought a long-lost touch to the lightly changed track. 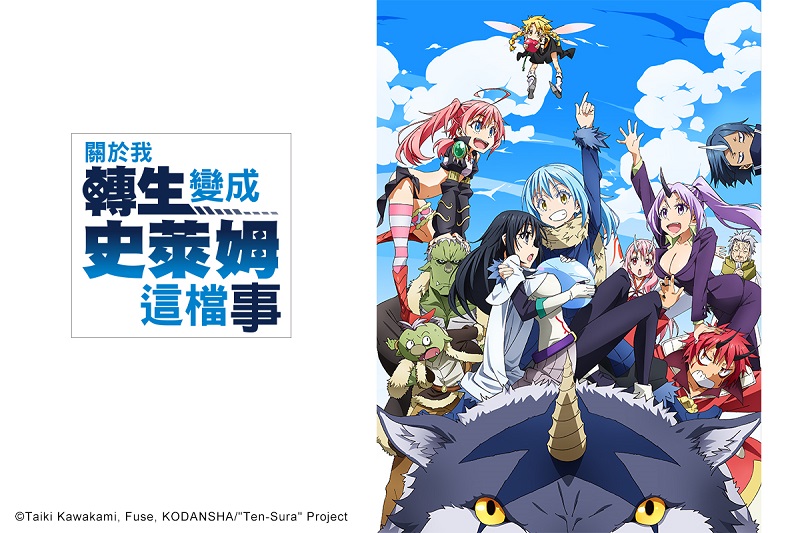 At the beginning of the story, the ordinary 37-year-old office worker Mikami Satoru was killed by a random murderer and reincarnated in another world. From the moment he was reincarnated, the plot development of this work opened a gap with most Long Ao Tianhou Gong works.

In another world, the male protagonist “unfortunately” reincarnated as the slime (named Limru) who is the lowest in the entire worldview, but the optimistic and kind-hearted male protagonist did not feel lost, but tried to find a way to become stronger. And the all-encompassing characteristics of slime pudding body made the male protagonist quickly find a way to survive. In the evolution of constantly devouring enemies and acquiring his skills, he became the strongest slime step by step. Hm. 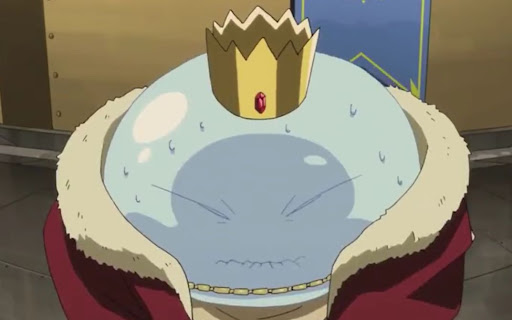 At the same time, the evolutionary history of slimes is also a large-scale general history of another world. In another world, Limru cooperated with friendly races, fought with hostile races, and persuaded people with morals. He was gradually supported as the co-owner of the forest, and then crowned as the demon king. He continued to write in cooperation or confrontation with other demon kings. The story of punishing evil and promoting good.

In the whole work, Limru has never had the heart to fight for hegemony. This slime, who just wants to enjoy life in a different world, wins hearts with his own wisdom and virtue. After being crowned as a queen, he still lives in harmony with different races for his life. Pursue. Contrary to the heavy kingly main line, this work is interspersed with a large number of non-combat plots, and it is dominated by funny daily and novel adventures. It is easy and fun without any vulgar links of “selling meat”.

At present, the total broadcast volume of Slime’s animation series at station B has been close to 1 billion, and the cumulative circulation of the novel in September this year also exceeded 27 million, surpassing the once king of light novels “Sword Art Online” in one fell swoop. Among the currently active ACG audiences, the slime who is both “cute” and “king” is undoubtedly the most dazzling star, and with the blessing of Bandai Namco, the popularity of the game will naturally come to pass.

Try the videoPixel-level restoration, the most immersive cute king experience

Players who have watched slime animation will probably be a little worried about the quality of mobile games, because the deepest impression of animation is “poor”. Constrained by funding and manpower, slime animations tend to be simpler in the battle scenes with higher requirements for painting. Instead, many characters sit together in “meetings”. Several episodes) to alleviate the problem of tight production cycle.

At the beginning of the game, there was no animation adapted to the common 2D opening animation of mobile games. Bandai Namco confidently used a full 3D scene to create a straightforward introduction to the two main systems of the game-dialogue and combat.

As an RPG mobile game, running maps, dialogues, and storytelling are naturally indispensable standard features. Thanks to the high-quality restoration of many scene settings in the original work, running the map in the slime mobile game also allows players to have a wonderful experience of visiting the Holy Land. The main characters appearing in the game are also the protagonists of the animation audience. Bandai Namco’s respect for the original is commendable.

This kind of restoration in the game is even “pervasive”. For example, the “Now Loading” when loading data not only has the LOGO of Moe King, but also the language of the original book. With the constantly switching of the original painting, you can instantly change The player pulls back to the kingdom of slime like a paradise in the animation.

The battle system of the mobile game adopts an easy-to-use turn-based system, which is also in line with the group characteristics of animation audiences dominated by light players. Each round will provide six command cards. The more command cards the player chooses, the easier it is to trigger a more powerful combo attack than a normal attack. In addition, each character has its own mysterious attack. In addition to the cool release effect, the naming of the mysterious also strictly follows the original setting.

In addition, the game also introduces the setting that Limru has in the original game that can swallow everything. In the battle, you can gain the opponent’s skills by swallowing the opponent.

In addition to the battles on the front lines, the urban construction that accounted for a large proportion of the original work has also been completely inherited. Players can gradually reproduce the peaceful and prosperous Federal State of Turnpest in the original work through the construction system. After building the ideal town in mind, players can also walk freely in it. In addition to admiring the scenery of the town, they can also harvest the output of various functional buildings. 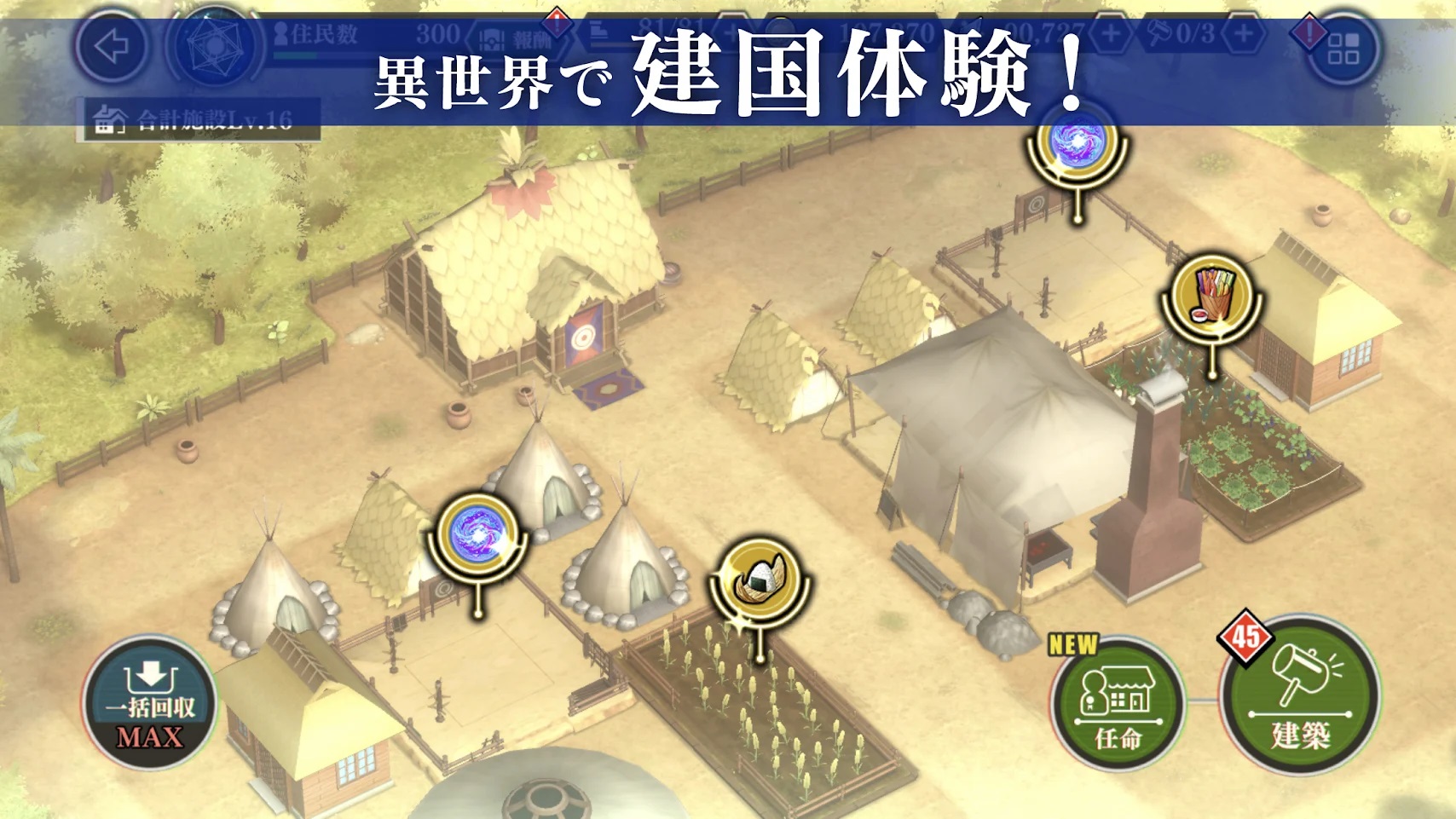 In terms of plot creation, the mobile game has also brought a surprise to the slime fans-Limru, who has no personal feelings, has a cute daughter who looks very similar to him out of thin air, around this The “daughter” who fell from the sky, exploring the original plot of the mobile game under the supervision of the novel author Fushi will also become another original motivation for players to play this work. 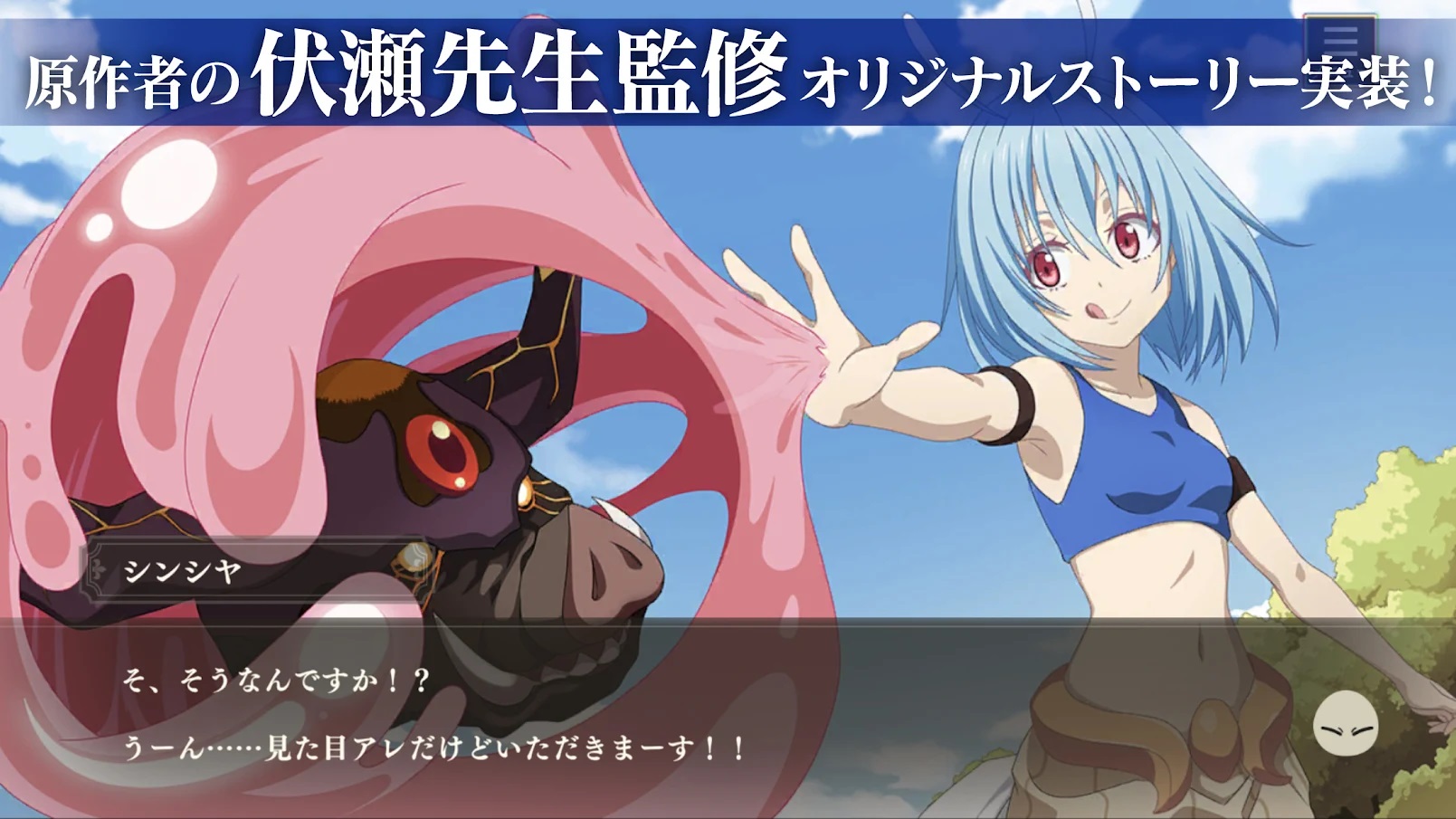 Focus on games or IP?A good story is the last word

Out of confidence in the global influence of the slime IP and the quality of the game itself, Bandai Namco has adopted a strategy of simultaneous global launch this time. In addition to providing the Japanese version in Japan, it is also launched in North America, Europe and the Asia-Pacific region. Supports international versions in multiple languages. Although judging from the current market performance, this game has performed well in many countries, but the best-performing market is still concentrated in East Asia, which pays more attention to story content.

Regarding this phenomenon, an old-fashioned question can also be found from the very different comments of the players-should the IP adaptation to the game emphasize the game or the IP?

In the opinion of many non-fans to players, this turn-based card game that supports fully automatic operation will soon fall into a “boring” state, so that some players directly give “not fun, you can play if you like IP “Play” evaluation.

But at the same time, a group of fans bluntly said to the players that this game is “very good”, especially the restoration of many settings in the original work is the best among all slime IP-to-work mobile games so far. Is a genuine license”.

From the actual experience, the story under the standard process obviously takes up much longer than the battle and construction. In addition, in order to facilitate fans to appreciate the story, the game uses a relatively simple turn-based system, so it is for pure game parties who like to skip the story. In other words, the gameplay of this game is difficult to satisfy.

However, judging from the number of reservations exceeding 1 million and the number of official followers exceeding 100,000, the original slime mobile game is still highly recognized by fans, compared to many IPs that have changed beyond recognition of the world view and even their roles. Adapted to the mobile game, Bandai Namco’s mobile game transformation of the slime IP is still quite successful in the eyes of fans. 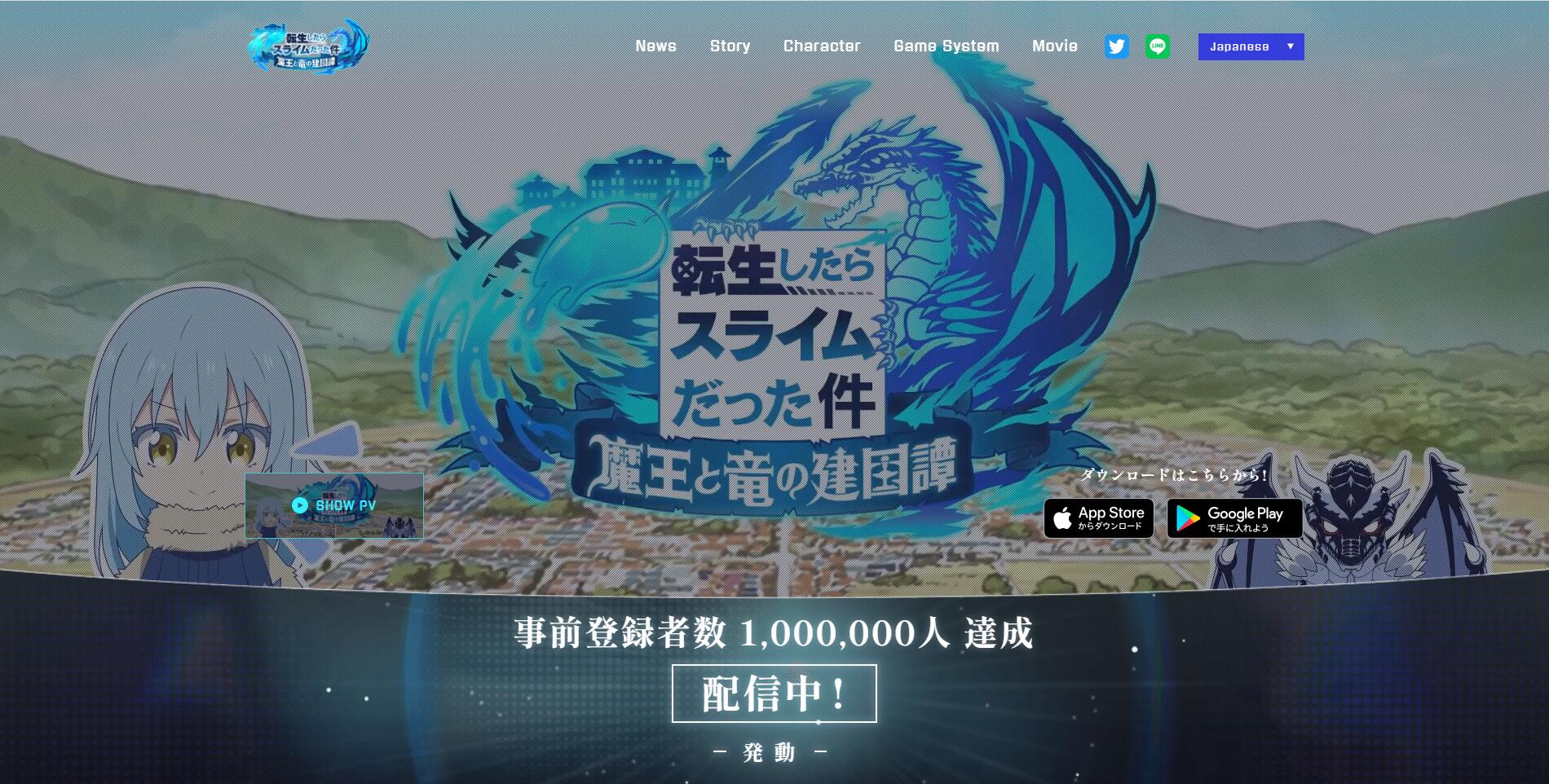 Therefore, GameLook also believes that the debate on IP adaptation of games will still be a question that cannot be answered for a long time in the future. After all, the game itself is a difficult category. However, for slime, a top-tier IP with a sufficient fan base, an authentic mobile game will naturally be a good choice.

Especially at the moment when the content of the lightly modified works is becoming more and more hollow, the slime mobile game, which takes the advantage of the original plot to the extreme, has proved with market performance that in the two-dimensional mobile game market, art is not the only way to win. An excellent plot that can stand the test of the market will never lack thunderous applause.