Zhao Wenzhuo, the endorsement of “overcoming the thorns and thorns”, joins hands with Jinshan World Tour to interpret the new style of martial arts

GameLook reported on October 29, the much-watched variety show “Brother Who Overcomes Thorns” ushered in the final group night. Seventeen brothers successfully made their debut and formed a “hot singing family”.

With the airing of the last episode of the program, related hot topics have also dominated the screen. Among these hotspots, Gamelook accidentally discovered a game—— The national style swordsman developed by Jinshan World Tour and distributed by Chaoxi Guangnian easily passed the signature card mobile game “Wulin Xia Xia”, On the same day, the heavy official announced the well-known Kung Fu movie star, “Brother Who Overcomes Troubles”Zhao WenzhuoBecame the spokesperson of the game and released a film-like cooperative pilot film, which instantly caused netizens to remember and kill, and related topics also directly rushed to Weibo hot searches. 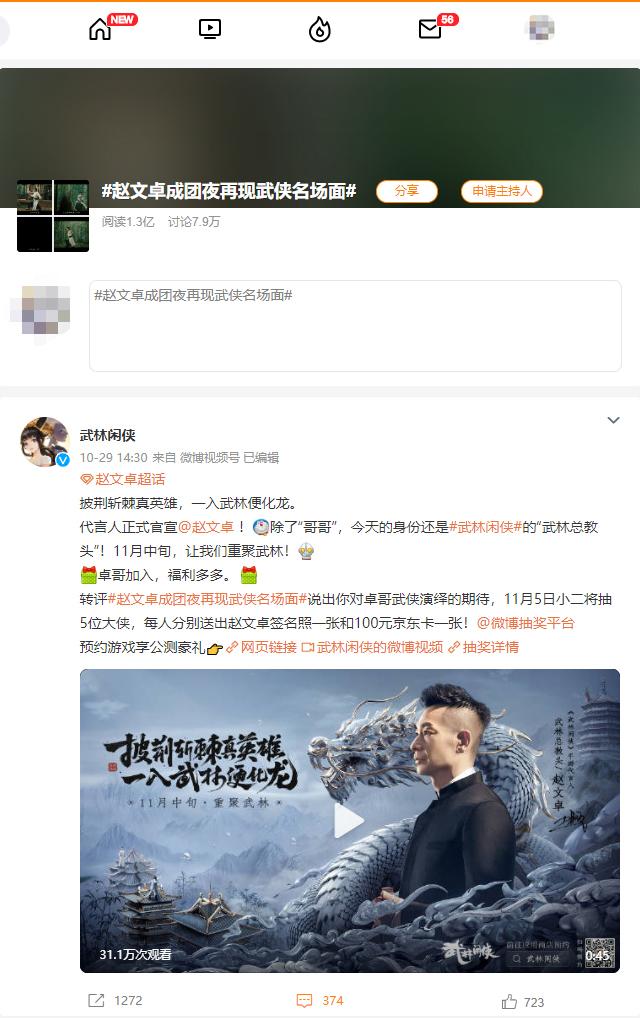 On the day of the group, why can this game invite heroes to endorse?

It is undeniable that celebrity spokespersons are not uncommon in gaming circles. With the help of the influence of the partners, it can often help the game to achieve the purpose of attracting new traffic faster. But as the mobile game market enters the inventory stage, the choice of spokespersons has long changed: influence is no longer the primary factor, and whether the two parties can fit together to create sparks becomes the key instead.

From this perspective, the cooperation between “Wulin Xia Xia” and the spokesperson Zhao Wenzhuo is highly compatible.

This is Zhao Wenzhuo’s game cooperation after he participated in the variety show “Brother Who Overcomes Troubles” and ushered in the peak of personal enthusiasm.

A great knight must go through years of experience and practice again and again inside and outside. In addition to being a hero and righteousness, he also has a mind that embraces heaven and earth and the tenderness pouring in the cracks of fireworks.

In past film and television works, Zhao Wenzhuo often left the audience with the impression of self-discipline, diligence, and perseverance. Everyone knows that “tough guys” can also have a “tenderness” side. In the program “Brother Who Overcomes Thorns”, Zhao Wenzhuo performed guqin, dances, and lyric songs many times, changing the inherent impression of “serious heroes” and interacting with other guests. There are also golden sentences frequently, showing a humorous, gentle, tolerant and even slightly cute side.“Heroes” is not only serious and serious, but also easy and fun.

Just like the delightful martial arts created by “Wulin Xia Xia”, in addition to the 100 classic martial arts that traditional martial arts fans yearn for, grand martial arts explorations and various rivers and lakes fireworks details, it also relies on casual card gameplay and witty hilarious content. The plot content gives the orthodox martial arts a relaxed and comfortable game feel, aiming to bring players a refreshing new martial arts experience:The way of martial arts is not only powerful and powerful, but also easy to become a chivalrous man with a degree of relaxation.

One is the happy rivers and lakes with martial arts heritage, and the other is the widely acclaimed martial arts master.At the same time, both parties are committed to making martial arts culture have more diverse forms of expression, and enter the public in a more interesting and fun way. The two can be described asComplement each other and join forces.

The full rejuvenation of martial arts, a relaxed world is essential

Martial arts came alive-in fact, it has become a major trend in recent years. Not only “Darts” and “Five Elements in the Fog Mountain” and other high-quality Chinese comics have emerged one after another; in the field of games, a variety of new martial arts games have appeared frequently, which has also promoted the return of martial arts culture to the public eye. On the one hand, the next generation of martial arts MMOs began to rise with the help of the national craze; on the other hand, different types of new games, led by the retro martial arts sandbox, have repeatedly appeared, reawakening the attention of the outside world to the martial arts track.

With the rise of the martial arts mobile game track, the user scale has grown again, and more requirements have been put forward for latecomers-to get rid of the immutable traditional martial arts game framework to meet the more diverse demands of today’s users.

In this context, the non-heavy gameplay represented by casual placement has begun to be loved by more and more players, and the continuous emergence of placement “dark horses” in the gaming circle is the most direct proof.

And “Wulin Xia Xia”, which inherits the heritage of orthodox martial arts and can create a relaxed world, will undoubtedly be one of the most promising players. 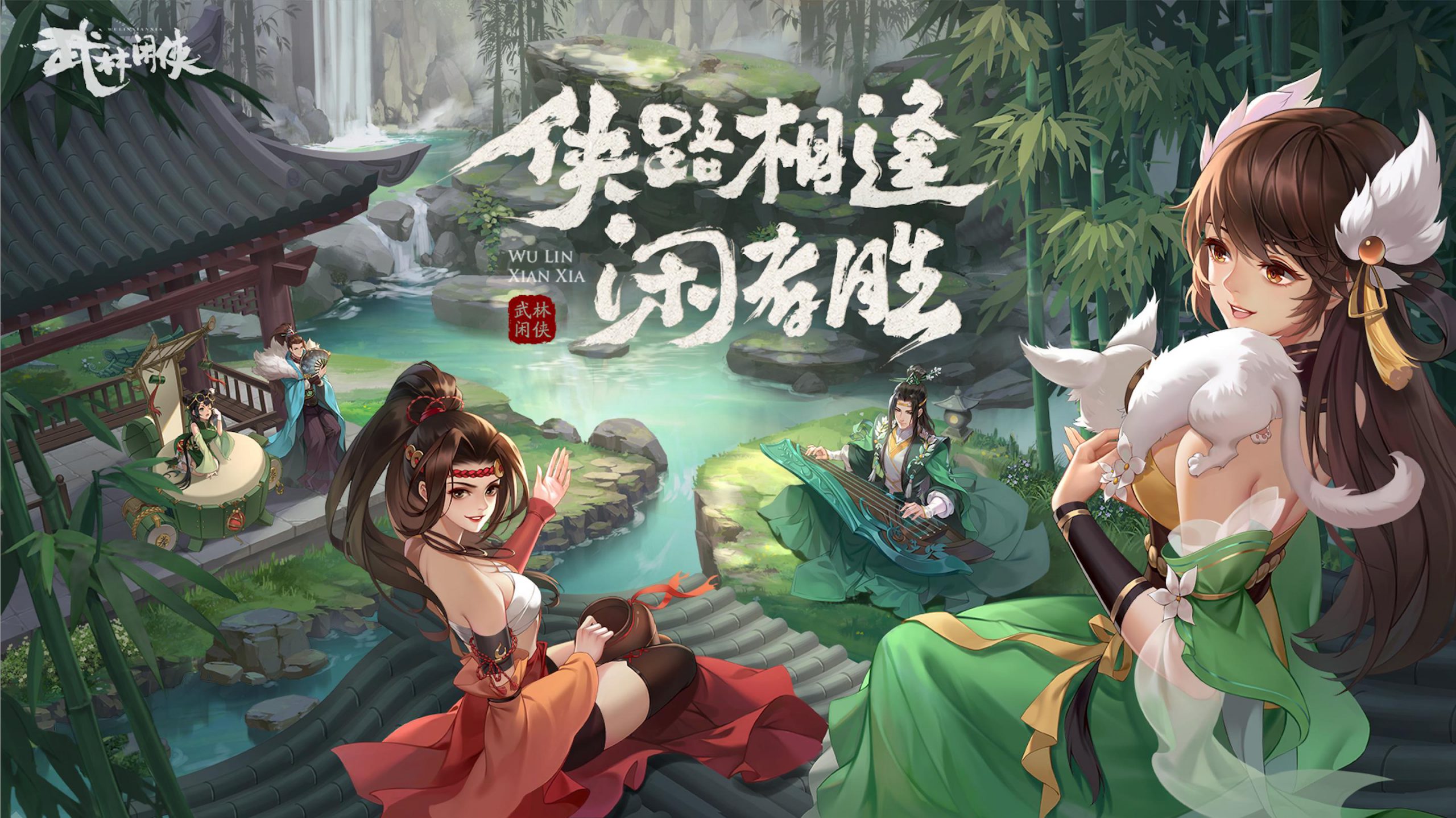 “Wulin Xia Xia” can be said to have a deep martial arts gene since its birth, after all, the gameThe R&D team is the Jinshan World Tour team that created the national martial arts IP “Swordsman Love” series.

In addition to the classic elements of traditional martial arts games, “Wulin Xia Xia” also tried to give “wuxia” some new forms of expression, that is, the word “xian” in the name of the game, but this does not mean that it is true to the martial arts. The deletion of the complex is simplified, but the use ofA more diverse, fun and relaxing way, So that more players can fully experience the charm of this classic culture.

After visualizing this purpose, it directly manifests itself in the placement of the gameplay, the non-destructive reshaping of the character development, and the use of AVG plot performance and interactive methods, including many nonsensical and interesting plot interpretations:

For example, when he first landed on Xia Ke Island, Yang Susu would come forward to stop the conflict between the player and the guard, with the famous line of “Don’t fight anymore!” . Various designs are obviously very different from traditional martial arts stories. 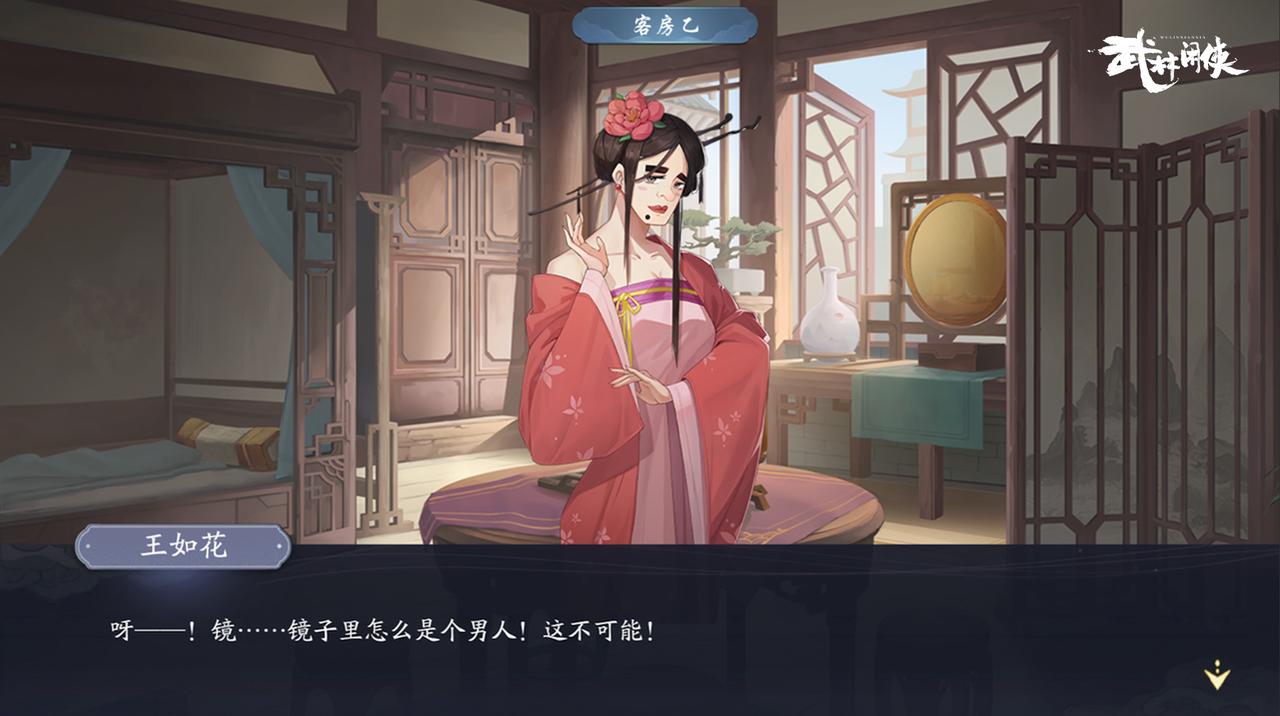 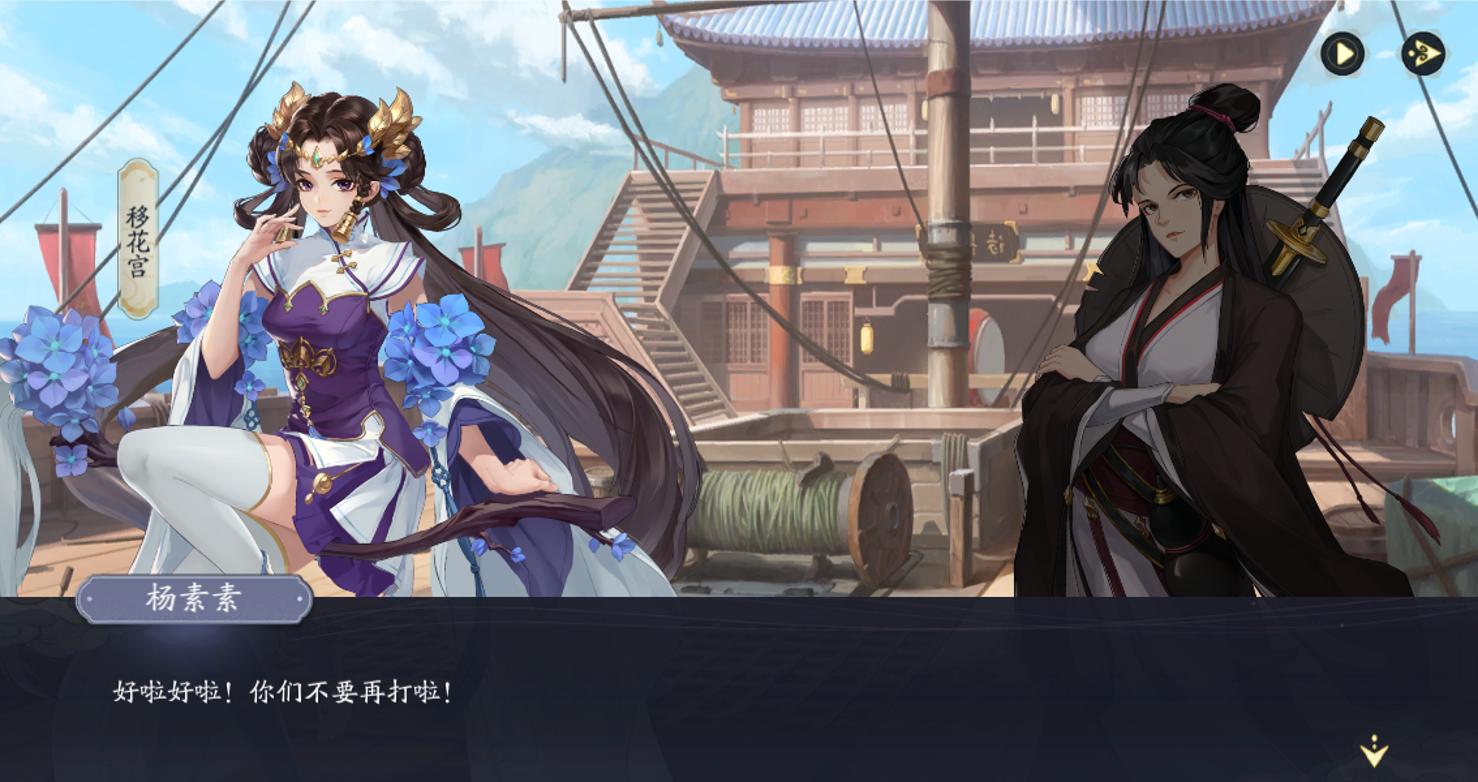 From this perspective, “Wulin Xia Xia” and Zhao Wenzhuo may be the best choice for each other, and they have the opportunity to burst out a chemical reaction of 1+1>2 in the subsequent cooperation to help more users quickly understand the game and even The core charm of martial arts has even accelerated the overall revival of the martial arts category.

But in Gamelook’s view, it can finally promote the cooperation between the two parties, and it was the first official announcement after Zhao Wenzhuo’s “debut in a group”. It is also inseparable from the publisher behind “Wulin Xia Xia”——Morning and evening light yearsImportant influence.

With the jade in front, what other surprises can light years bring?

As an important “emerging force” in the game industry, Chaoxi Guangnian has grown rapidly since its establishment and successfully launched a variety of game products that are well-loved by users. In addition to its own accumulated strength, Chaoxi Guangnian’s distribution relies on the Douyin content ecology, and has also attracted hundreds of millions of high-quality content creators, including Zhao Wenzhuo. While promoting the game, it uses a combination of games and short videos. Ways to better promote the spirit and connotation of martial arts culture to users. This is what Zhao Wenzhuo is willing to participate in.

In April of this year, with the excellent performance of “One Piece Hot Blood Route”, Chaoxi Guangnian made a beautiful start in the country and gradually emerged in the game industry. 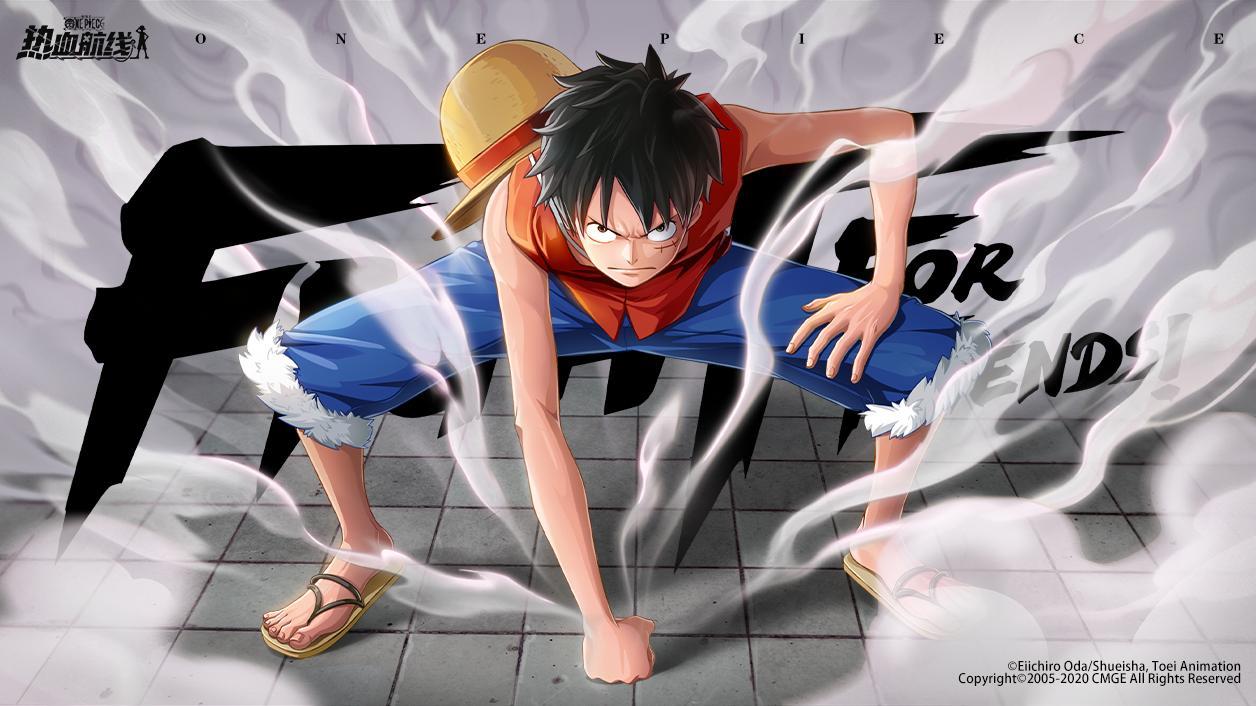 After successfully creating “One Piece Passionate Blood Route” and verifying its distribution model through the amount of content, the arduous days and evenings did not slack off, but continued to expand its product matrix: in July, it launched the sports and leisure category. The game “Sonic at the 2020 Tokyo Olympics” and its first self-developed project “Hua Yishan Heart Moon” will also be launched soon. Through these products, Chaoxi Guangnian continues to explore the advantages of massive engines and high-quality content production behind it, and continues to explore a diversified distribution model that combines content and traffic. In this context, the early move of “Wulin Xia Xia” is undoubtedly expected. After multiple rounds of testing, this product will be publicly tested. It enjoys a high reputation and expectation among players. It ranks in the top three on the Taptap appointment list and always maintains a user rating of more than 8 points. 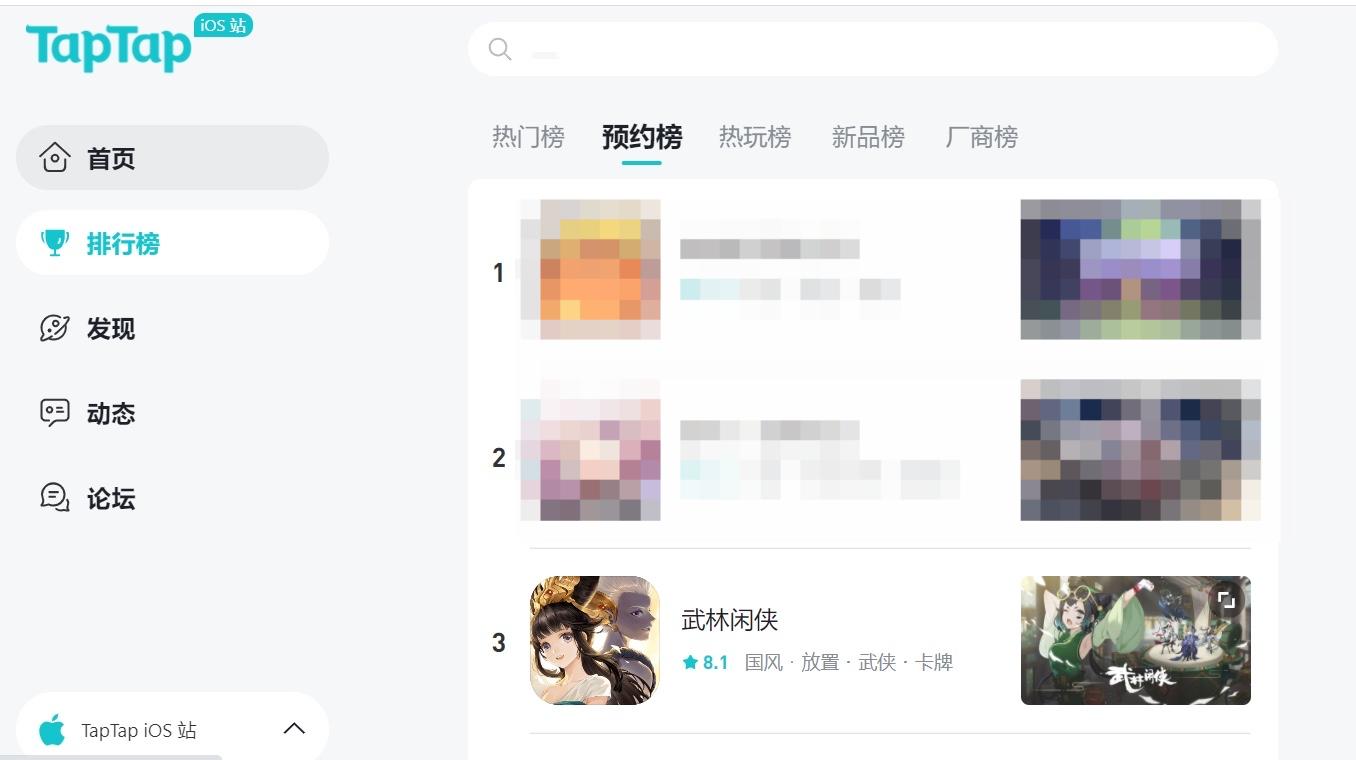 In addition, the distribution team cooperated with the official announcement on the day of the group night of the “Brother” program. With the help of Zhao Wenzhuo’s group hotspot, relying on the cooperation of pilot films and related content, they successfully created a number of hits on social platforms such as Douyin and Weibo. Topic, and then realized the full dissemination of Zhao Wenzhuo’s endorsement information in different circles.

Just a pilot film for endorsement cooperation, “Wulin Xia Xia” has revealed the market keen sense to grasp the hot spots, and the ability to skillfully play content platforms such as Douyin, which set off the first round of craze before the game’s public beta. As the game launch date approaches in mid-November, we have even more reason to expect that “Wulin Xia Xia” will bring even greater surprises to the industry in the follow-up. 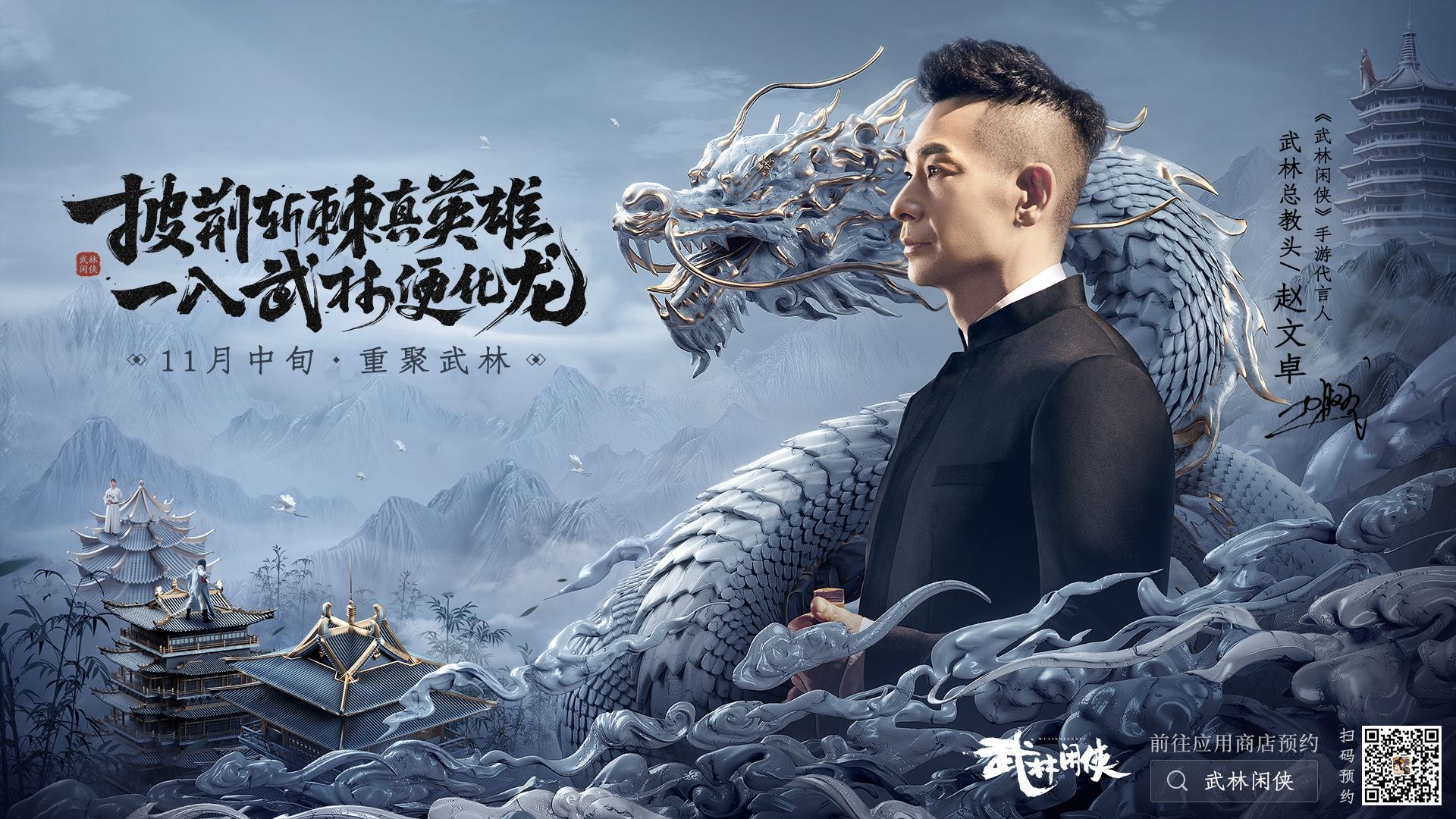 PlayStation Plus in December with Godfall, Lego DC Super-Villains and Mortal Shell

Dead by Daylight Portrait of a Murder DLC Available