Pixel World is a creator of the world, this “simple” civilization simulator mobile game is amazing!

GameLook reports/There is such an insight: the ancient humans on the Serengeti grasslands in Africa are actually just playthings on the sand table, and their destiny rests in the hands of the moody God. The latter was happy that it rained and allowed humans to evolve for 200,000 years; when they were angry, they would release natural disasters and end everything…

All of the above are actually from a short film “God: Serengeti” directed by Neil Blomkamp, ​​director of “District Nine” in 2017. Coincidentally, there is a book, just such a game, but also let players experience the feeling of “being God” from a nearly identical perspective. 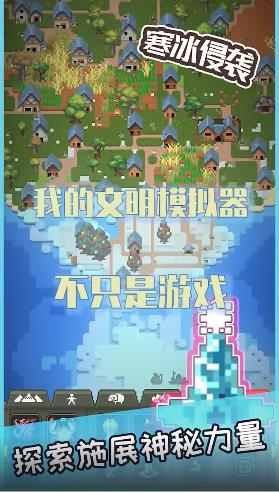 The beginning is God, can see the immovable Creator

Intuitively, the gameplay of “WorldBox” is not complicated, and there is almost no barrier to getting started.

Without too much guidance from novices, a world is randomly generated at the beginning of the game, with land, ocean, or forest, snow-capped mountains, volcanoes, and so on. But just like the beginning of “Genesis”, players who play God need to select through menus to create life in this barren world, such as rabbits, chickens or wolves, bears, and even human beings. 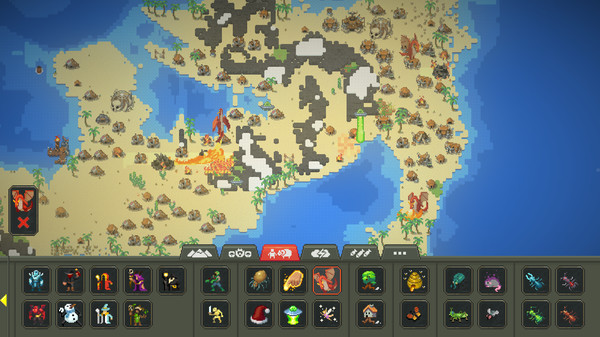 But what is interesting is that players in the perspective of God do not have a pair of “hands of God” and cannot directly manipulate the created creatures. This is the design, on the contrary, it allows players to intuitively feel the shock brought by the collision and integration of civilizations as they watch the group of pixel people gather, build, establish countries, develop civilizations, as well as wars, colonizes, and discover new continents between countries. , This is also one of the core charms of the game.

Of course, “WorldBox” is a sandbox game after all, and it also continues the core of sandbox free creation. As a god, players can not only place creatures, they can also move mountains and fill the sea at will, change the terrain of the world, such as connecting land together, placing mountains and so on. 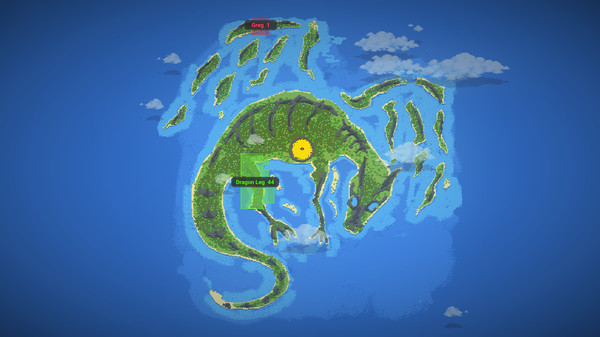 At the same time, players are not just playing the role of a pure spectator, they can also obtain some advanced props in the game to influence the development of civilization. For example, lightning, tornadoes, acid rain, nuclear bombs, dragons, UFOs, etc., or control monsters, skeletons, zombies, ice monsters and other creatures to promote the progress of the game.

It is worth noting that all of the above items can be obtained immediately by watching the advertisement, or you can get an upgrade package for $7.99 (about 51 yuan) to unlock all the items, and this is currently the only payment point for the game.

A pixel world with everything available, MOD is the source of happiness for players

In GameLook’s view, “WorldBox” can be said to be a somewhat “contradictory” game.

On the one hand, although it is a 2D pixel style, the game screen is not rough, but it is not an exaggeration to call it fine. It can be found that whether it is a volcanic eruption on the map or a war, these dynamic scene changes can be intuitively captured by the player after freely zooming the perspective.

The same “contradictory” part is the gameplay. Although “WorldBox” is easy to get started, there are many hidden and interesting settings waiting for players to explore, and the ecology, civilization, diplomacy, equipment, and military systems are all available. It is “The sparrow is small and has all five internal organs.” What’s more, there are videos on Youtube specifically explaining how the sects in “WorldBox” work. 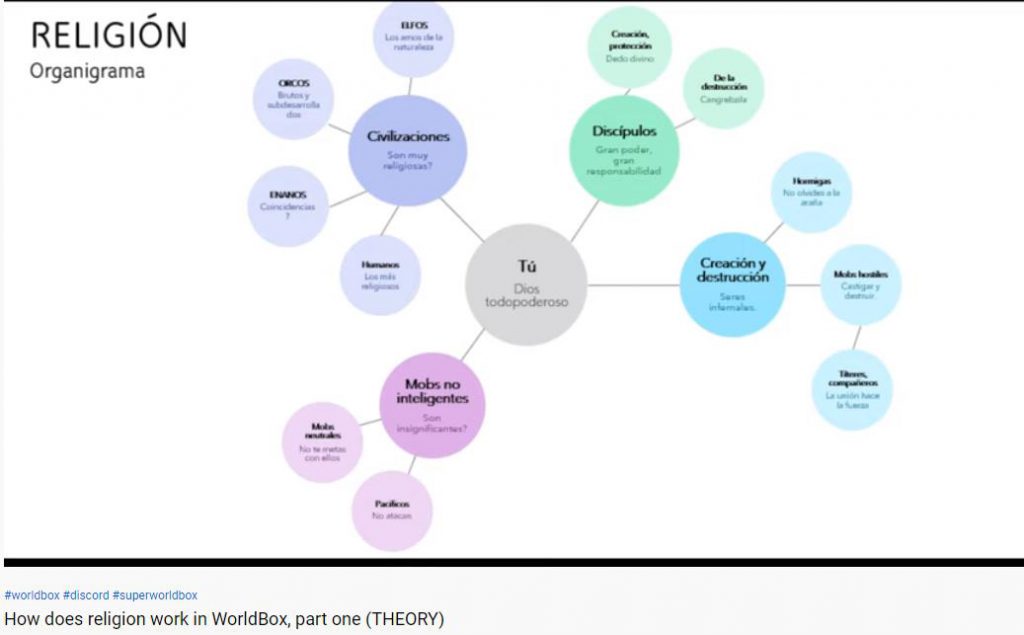 Taking a closer look, this detailed and complete detail is reflected in all aspects of the game design. To bear the brunt, the game is divided into four major races and different biomes. Among them, the four major races of humans, orcs, elves, and dwarves have relatively complete self-development capabilities, and they will build empires, start wars for more land, and so on.

At the same time, each race has unique designs and mechanisms. For example, humans have all attributes weaker than elves and have no innate racial characteristics and gains, but they reproduce faster and develop rapidly. Orcs have higher attack power and have “regeneration”. The innate characteristics of, will actively attack neutral and peaceful creatures such as chickens and sheep, but its diplomatic power is extremely low, and it is easy to be guided to attack other races. It belongs to the type with rapid development in the early stage and average strength in the later stage. 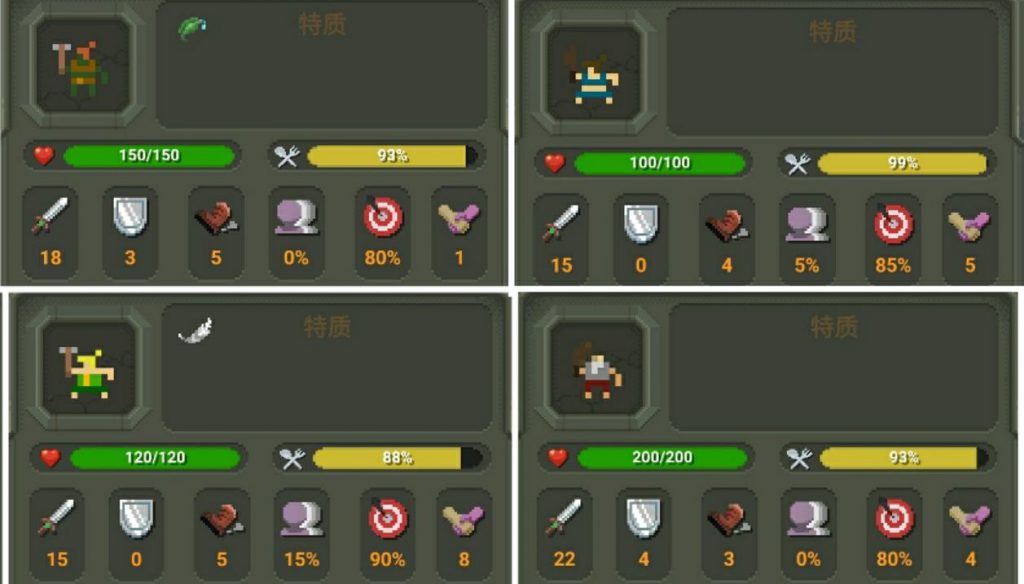 It is this self-contained game ecology with rich content such as civilization progress, wars and diplomacy that together construct a vibrant world and continue to attract the attention of players from all over the world. Even if it has a lot of fans in China, TapTap alone has more than 400,000 followers.

In fact, the game was first released on Newgrounds in the form of Flash in 2012, and then quickly gained support from a large number of players. Thanks to the recognition of countless fans, the producer finally decided to continue to develop this game called “WorldBox” in 2017.

In 2018, Maxim Karpenko released the first version of “WorldBox” on the Android platform and landed on the iOS platform the following year. In this regard, he also said: “I think I should be here to thank those players for their many comments and feedback, as well as the silent support of the game community. It is precisely because of these supports that this game has grown from children to adults, and Get more updates and optimizations.”

As the official said, “WorldBox” is more like being created by the game community, which really supports the growth of the game. Thanks to this active player ecology, a variety of peculiar MOD combinations were subsequently brought, injecting a whole new soul into the game. 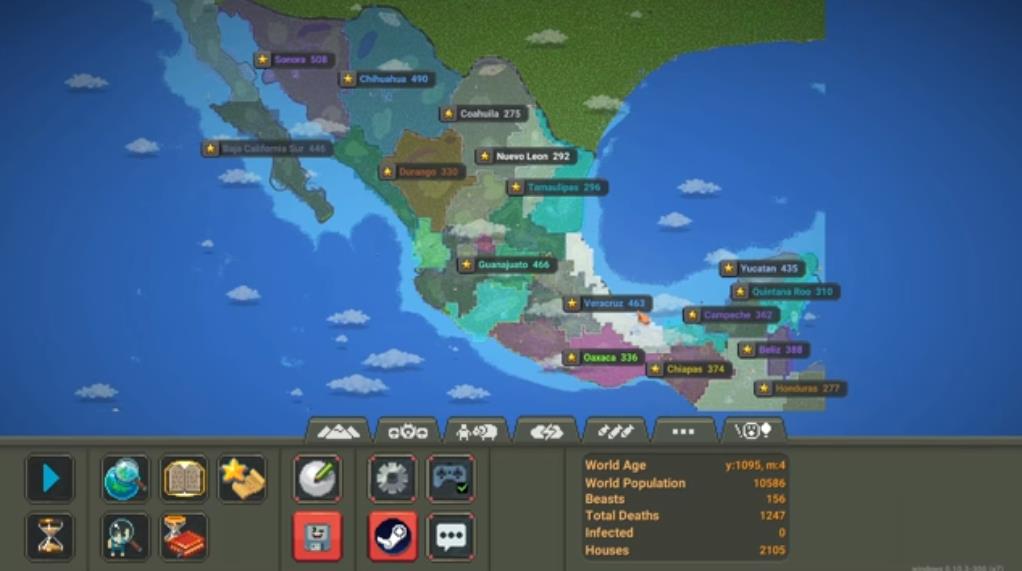 For example, some foreign players made a homemade map of Mexico and launched a fierce real civil war; or launched a futuristic technology module to start a sci-fi war; in addition, there are more free-play players who shared the “Attack The MOD of “The Giant” restores the island of Paraty surrounded by unsullied giants. 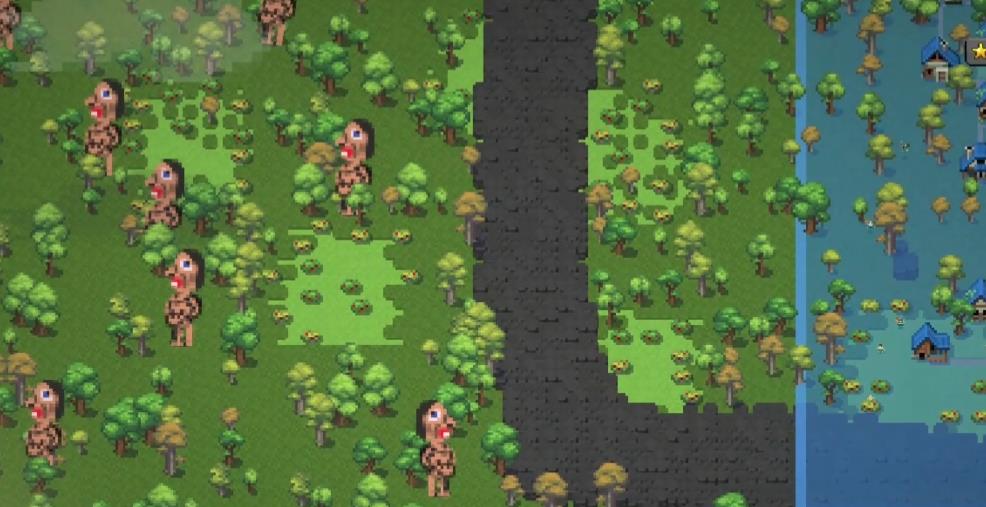 In the same atmosphere, the enthusiasm of domestic players is naturally not too much, and the in-game re-enactment of popular historical wars such as the Battle of the Deer, the Three Kingdoms, and World War II has become a common practice. In addition to this, there is even a large-scale mod for cultivating immortals with fantasy routes. Human warfare has directly evolved into cultivating immortal sects. Players also seamlessly transition from God to the heavenly world of cultivating immortals. 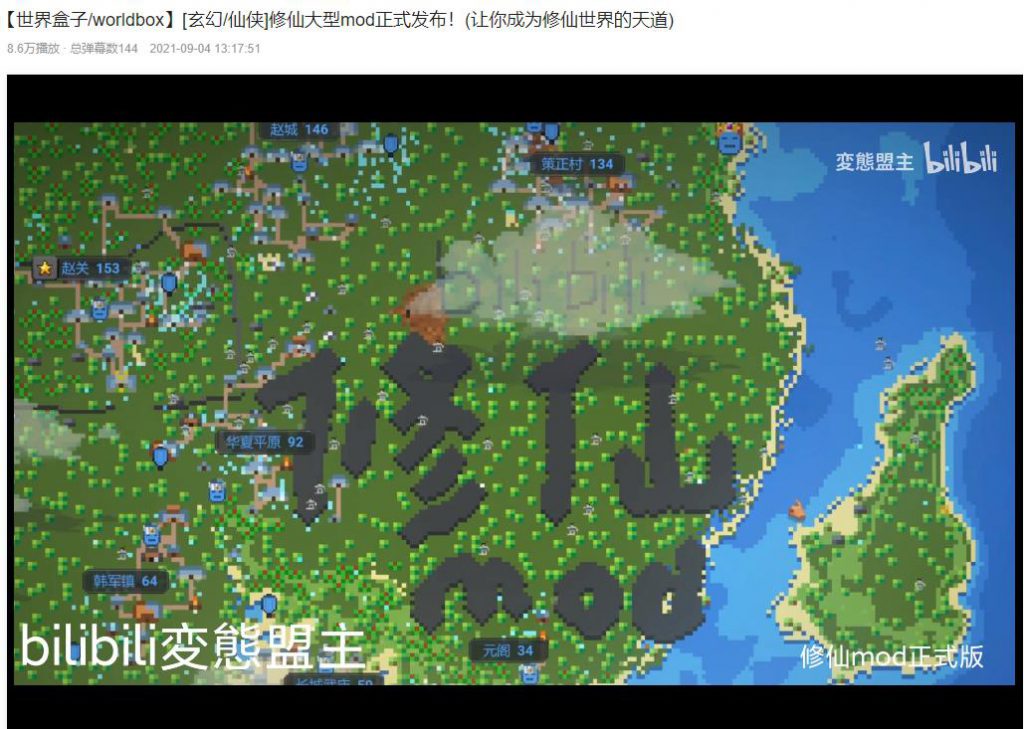 ﻿
Player-made MOD-Battle of the Deer

Play god and be the true creator

“This is the most amazing game in history.” Browsing through the major game communities, GameLook saw similar comments more than once. Regardless of the player’s personal emotions, the “god” here is actually not only an adjective, but also the consistent feeling of players at home and abroad, that is, playing a true God in “WorldBox”.

“After playing for three hours, I feel like I am a God.” From the words of many players, it can be found that even though most of the time can only be “watched” and cannot directly interfere, the feeling of standing in the perspective of God still makes many players Was hooked.

There are also overseas players who are also obsessed with playing God. It is not difficult to find that some players have bluntly said on Twitter related topics: “Being a God is a kind of low-key fun. My human evolution is too cute, and I also contribute to my own village. name.” Of course, the game has also spawned a lot of brainstorming ways to play, such as trying to use props to destroy civilization, let a country start a civil war, and prompt an empire built by four races to go to war in the game… This kind of playing God brings control of everything The refreshment of the game has also become the root of the game’s popularity.

What’s interesting is that the “God’s Act” in the game that disrupts the world’s progress and increases the difficulty of civilization development also makes players joking: “Imagine being a scientist, geologist, and historian in this world, and trying to explain this. Supernatural event.”

In addition, there are players who start from their own feelings and point out another reason why the game is so hot: the pixel format of “WorldBox” makes the game more fascinating, and players are more willing to focus on the game itself. At the same time, the perspective of God, which cannot be directly involved in the operation, brings players a different kind of thinking.

Some players mentioned that sometimes when you see NPCs doing some unthinkable behaviors, you will feel that they are extraordinary wisdom; if civilization can’t develop, you will worry about him; it seems that you are really participating, but this feeling is just watching Only the person can experience it. 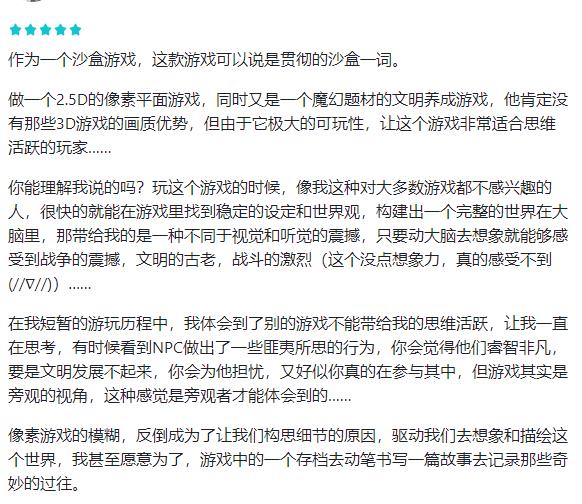 It’s hard to imagine that with the domestic game industry’s continuous involution of art and technical force steadily rising, “WorldBox” has gone through four years with its seemingly crude 2D pixel art, even with purchases. Advertising as an opportunity to gain more attention from new users.

I think that perhaps compared to the visual innovation, “WorldBox”, which has continuously grown from the player community, can bring players even greater surprises with the help of rich content and interesting gameplay.

Dead Cells “The Queen and the Sea” DLC Announced