The Call of Duty Vanguard release date is finally here on PS5, PS4, Xbox Series X/S, Xbox One, and PC.

The WW2 first-person shooter has a November 5 launch date across all platforms.

And there’s good news for fans in the UK, as Call of Duty Vanguard has a midnight release time across all platforms.

To make sure you don’t miss a second of the action, pre-order customers can pre-load the game before launch.

On PlayStation 5, Vanguard weighs 64.13 GB, although users will need 89.84 GB of available hard drive space. The file size of PlayStation 4 is actually slightly smaller at 54.65 GB, although it requires 93.12 GB of space.

On Xbox Series X and Series S, Vanguard is a 61GB download, while the Xbox One weighs 56.6GB.

The PC version of Vanguard requires a minimum of 36 GB, although 61 GB is the recommended amount of space.

It’s also worth noting that Vanguard has received a pre-release patch, which is worth downloading if you’ve already preloaded the game.

If you haven’t pre-ordered Call of Duty Vanguard and are looking for a deal on a physical copy, check out the links below.

Call of Duty Vanguard takes the action back to WW2.

Unfortunately, however, Call of Duty Vanguard will not launch alongside the new Pacific Warzone map.

As you can see from the roadmap below, the Caledra Pacific map will be available from December 2.

This is the same date as the Season 1 launch for Call of Duty Vanguard. The new season adds new maps and modes, new weapons and items, as well as new Zombies content.

Leading up to the new season, Vanguard players will be treated to the release of the remastered Shipment map on November 17.

Meanwhile, Call of Duty fans have plenty to get started with, as Vanguard is packed with content.

It all starts with the single player campaign called ‘Birth of the Special Forces’.

A battle on all fronts. End Project Phoenix and relive the heroic moments of Task Force One, a multinational group of heroes including Arthur Kingsley, Polina Petrova, Wade Jackson, Lucas Riggs, Richard Webb and many others united in the fight against evil. “ 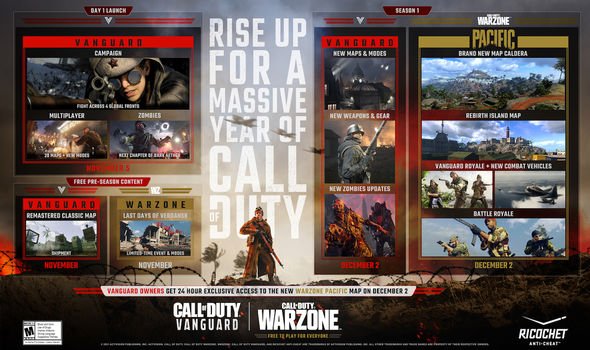 The campaign is launching alongside a robust multiplayer offering, which includes 20 maps.

Fans can participate in seven base game modes, plus the brand new Champion Hill mode.

“Vanguard Multiplayer also brings you another new mode: a multi-arena survival tournament known as Champion Hill that appeared in the game’s alpha and beta earlier this year.

“Invite your Duo, form your Trio, or go solo as you build a Loadout in this fast-paced, limited-life mode.

“Earn money by picking up drops, taking out enemies and winning rounds, then spend it on upgrading weapons or getting new armaments, gear, perks or tide-turning Killstreaks.”