As part of the release of current company figures, Nintendo has presented these and other details to investors. Initially in an online event, but as always the presentation was also published in internet.

It’s also about the further plans with the Nintendo Switch and the time after that – specifically about a new console. That shouldn’t surprise anyone. Nintendo has also been working on the next console for years.

First, Shuntaro Furukawa reassured investors. Although the numbers are worse than last year, they are still at a high level and in line with expectations. The “culprit” was quickly found: Animal Crossing made 2020 an exceptionally good year.

Insights into demographics and active users

There are interesting insights into the number of active users. Nintendo is also publishing demographic data for the first time. The vast majority of Switch users are in their early twenties. The first join when they are five years old, and even if they are over 60, they still gamble.

While the Switch is approaching 100 million, Nintendo doesn’t see itself at the end of the line with this generation of consoles. The Switch OLED should also provide growth in the sixth year. Something that, according to Nintendo, has never been done with its own system.

The console’s three game modes (tabletop, TV and handheld mode) are still seen as a unique selling point in the market. These features should continue to encourage customers to buy a Switch.

The plan is also to continue to encourage users to subscribe to Nintendo Switch Online. There are currently 32 million subscriptions. The service enhancements are intended to make the subscription more attractive. They also want to continue to position themselves broadly: merchandise, mobile games, films and theme parks. All with the aim of luring people into the Nintendo universe.

And then you look a little bit into the future. The plan to develop a “next game system” is in black and white in the annual report. The graphics are more than meets the eye. The colored background indicates that the Nintendo Account is continuing. There are over 250 million Nintendo accounts worldwide – a good foundation. The aim is to continue the “good, lasting relationship” with the customer.

It’s a matter of time

In addition, value-added services need to be expanded. In other words, things that do not belong to the core business, but have added value for users. The N64 subscription should include Nintendo, but also mobile games and of course theme parks and movies.

Almost joking: with the year “20XX”, Nintendo also writes a number for the start of the next generation in the report. So it’s only possible until 2099. If the switch continues to run so well, that’s very conceivable! Of course not – also a joke. 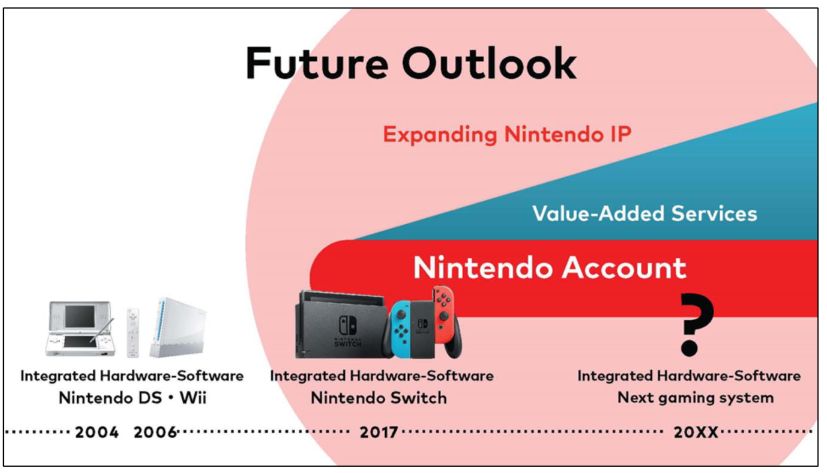 The Hinokami Chronicles is now available