GameLook reported/ mentioned the next generation, people will always think of those 3A masterpieces on the console platform and the game house that is operated with a handle. However, no matter what you imagine, it is almost impossible for female players to appear in this picture, and female-oriented games that are lighter in size and gameplay are even more difficult to be associated with the next generation.

However, this inherent cognition is gradually being broken by some explorers, especially the female dress-up track that emphasizes the performance of the picture. After the 3D jade of Shining Warmth, there are two more different styles but they are both different. The face-up game, which is presented as a selling point of generations of art, is raising the technical threshold of this track to a new level.

They are “In the Name of Shining” developed by Zulong Game and “Project Doll” developed by Shumei Mutual Entertainment and Bilibili Game. At present, the number of reservations for the two games has exceeded 500,000. The enthusiasm of the players also indicates that the next generation of female dress-up games is coming. 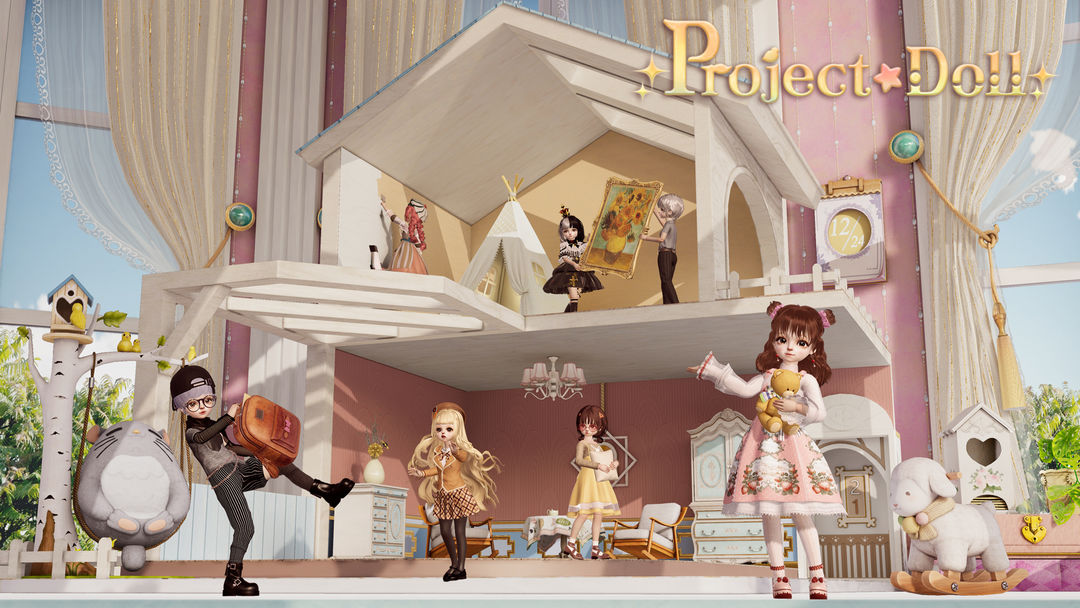 At the Unreal Engine Online UOD Conference held at the end of last year, Zulong, a well-known MMORPG game, unexpectedly announced a female-oriented dress-up game called “Project I”, which is more surprising than Zulong’s transformation. This is the ultimate picture quality presentation of this game developed with the Unreal 4 engine. Li Qing, founder, chairman and CEO of Zulong Entertainment, said at the meeting that the details of this game are touching, and the skin texture can be seen with faint capillaries. 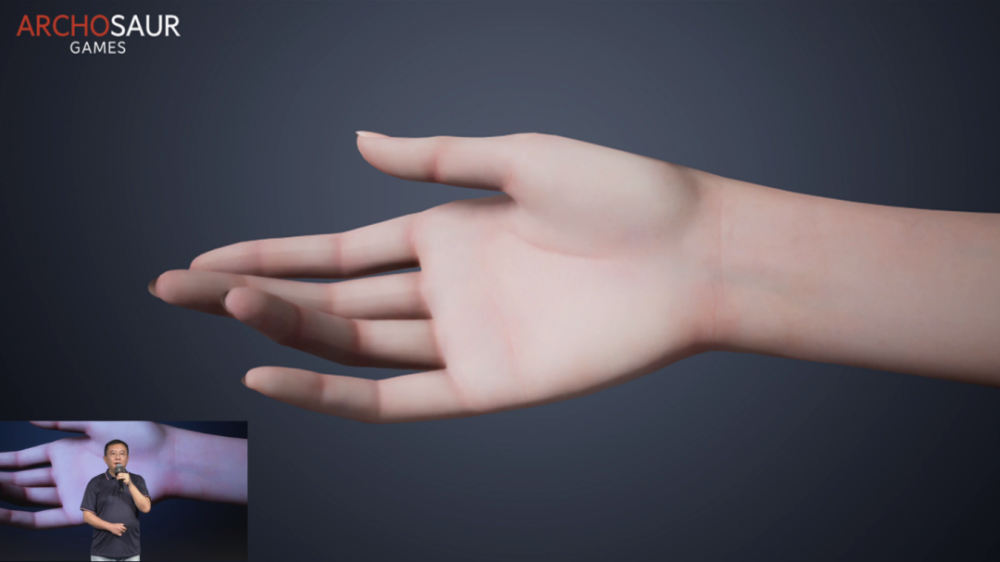 After a lapse of one year, on October 21 this year, this game was opened to players for the first time for a two-day small-scale test, and the game’s name was officially named “In the Name of Shining”. Judging from the performance of this test, the art of this game really does live up to the “shining name”.

In addition to the technical blessings of Unreal Engine, Zulong’s accumulated knowledge in the field of MMORPG for many years has also been released in “In the Name of Shining”. This game has a very free face-squeezing system, which is available from head to toe, fully satisfying the meticulous and personalized demands of female players. The makeup part alone contains 8 sub-options such as eyebrow makeup, cosmetic contact lenses, eyeliner, and eye shadow. Each option provides a very popular makeup style, which is quite delicate and delicate. Netizens also said that there must be ” A young lady who knows fashion very much”.

Equally exquisite is the costume design in the game. At the UOD conference, Li Qing said that every fashion in the game has been sculpted repeatedly by artists and will pursue globalization in style. In the actual test, each set of clothing has been highly recognized by the players, and the depiction of the details of the clothing has reached a presentation that is not inferior to the three-dimensional. Whether it’s cloth or leather, all materials have extremely realistic texture presentations. People have to feel that Zulong’s entry is comparable to the dimensionality reduction blow of professional players to amateur players.

It is worth noting that, compared with the high level of realism of characters and clothing, “In the Name of Shining” is quite dreamy in terms of light processing. This kind of light expression that makes some players feel a bit “overexposed” is actually the source. The idol style pursued by this game. 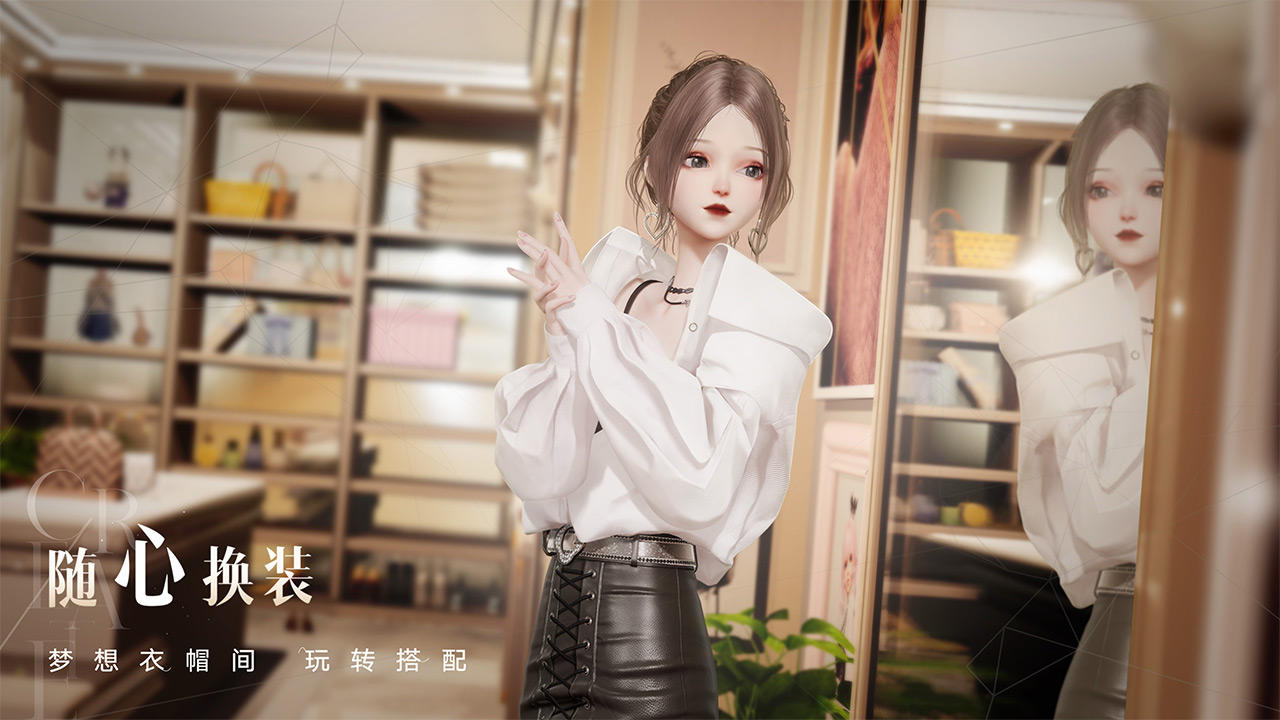 From the test version, the core content of this game is pinch face + photo. The overall UI design is almost the same as that of a selfie software. For this reason, for female players who love selfies, it is better than pinch. A virtual self, this game hopes that they can pinch out the most ideal idol image in their hearts, and the visual presentation of the virtual idol level can maximize the satisfaction of female players’ ultimate imagination of “beauty”.

On Tap Tap, this exquisite idolization style has also been recognized by many female players. Players have given praise to character modeling, clothing and makeup. “Excellent graphics” has become the most frequently seen in player reviews. Label. Interestingly, some players expressed the hope that this game can provide a mirror for themselves who do not wear makeup in reality. The highly realistic next-generation style of painting also unexpectedly makes this game “full of practicality” for female players. .

Yun raises a baby, but also to cultivate a sense of reality

Compared with “In the Name of Shining”, “Project Doll” presents another style of next-generation art expression. As a “cloud raising baby” game, the target prototype of “Project Doll” is not a female star in reality, but a BJD doll that already has many fans offline.

BJD is the abbreviation of “Ball Joint Doll” in English, literally translated as spherical joint humanoid. This kind of doll originated in Europe. Because the key parts are equipped with ball-shaped joints, it can make many poses close to real people. Different from the cloth dolls that children often play with, BJD dolls are often expensive, and they are made of more skin-like resin materials, so they are more anthropomorphic in style. The collectors are mostly adults, even some Many collectors of BJD puppets will hold regular gatherings to exchange their “raising baby” experiences.

It is also because of the high price threshold that many players can only release their enthusiasm for BJD dolls through the “cloud raising baby” method. The emergence of “Project Doll” undoubtedly gave them a better cloud raising baby Experience.

In mid-September, “Project Doll” also conducted a small-scale test. Although it also pursues the next-generation image quality presentation, its style is undoubtedly better than “In the Name of Shining” due to the characteristics of the theme of BJD dolls. More cute.

At the beginning of the game, the player will receive his own BJD doll as an adopter. Of course, the BJD doll in the game can freely communicate with the player. Players who are “beginners” need to complete various tasks to dress up their BJD dolls beautifully, and the props for making these costumes are mainly yarn balls and fabrics, which are similar to those of real BJD enthusiasts. The way of “raising a baby” is no different.

Carefully observe the BJD doll in the game, its spherical joints are clearly visible, and it also has the resin texture of a real BJD doll in the performance of human material. In terms of body proportions, the five-headed “Project Doll” undoubtedly contrasts sharply with the nine-headed “In the Name of Shining”, which further reflects the high degree of restoration of BJD dolls.

Nevertheless, “Project Doll”, which takes the route of cute raising children, has not given up on the pursuit of exquisiteness. Whether it is the scene or the image of the doll, makeup, and clothing, there are sufficiently detailed and realistic depictions, even if it is used as a background board. In the bedroom scene, a table lamp with full details is enough to make the scene of the princess room vivid on the screen, so that the “mother” players have a more immersive gaming experience.

As for the picture quality of this game, the test players who participated in the game also said that “the exquisiteness is unexpected, the light and shadow effects are in place, the fabrics of the clothes are very detailed, and the edges of the characters are also very smooth.” Players who have not participated in the test continue to express their urgent need for the game to be released as soon as possible.

The next generation is coming, manufacturers should be one step faster than players

From the perspective of overall performance and player evaluation, although the two games have different art styles, they are both remarkable in the creation of the next-generation picture quality, but this also brings an unexpected problem. 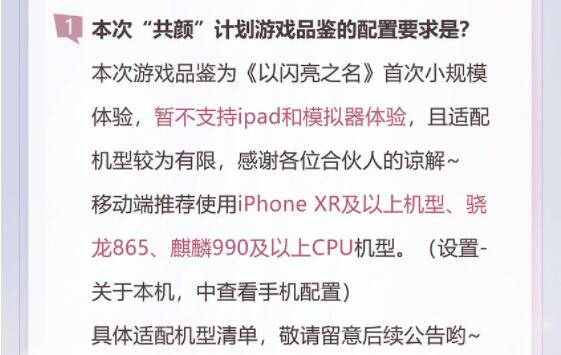 In the test description of “In the Name of Shining”, it is clearly mentioned that the recommended requirements for Android hardware are Snapdragon 865 processors and Kirin 990 processors or higher, while the recommended requirements for iOS hardware are relaxed to iPhone XR (A12 processing Maker, released in 2018). The test installation package of “Project Doll” is as high as 2.34G. Players who use iPhone X to participate in the test report that the phone becomes hot and consumes power quickly during the game.

Although the test version has always had higher hardware requirements, judging from the next-generation performance of the two games, the hardware requirements of the final online version will naturally not be much lower, especially for players who want to pursue the ultimate picture quality. A flagship phone that has been on the market within two years seems essential.

However, female mobile phones in the Android camp currently on the market generally use sub-flagship or mid-range chips in exchange for a thinner body and longer battery life. The heavy appearance, heavy camera and light performance are also common standards adopted by many women when choosing mobile phones. . The large-scale installation package and higher hardware requirements of next-generation games obviously raise the barriers to play for female players who prefer lighter games. If you want to really promote the popularization of the next generation of women to dress up mobile games, it may also require the joint efforts of game manufacturers and hardware manufacturers. 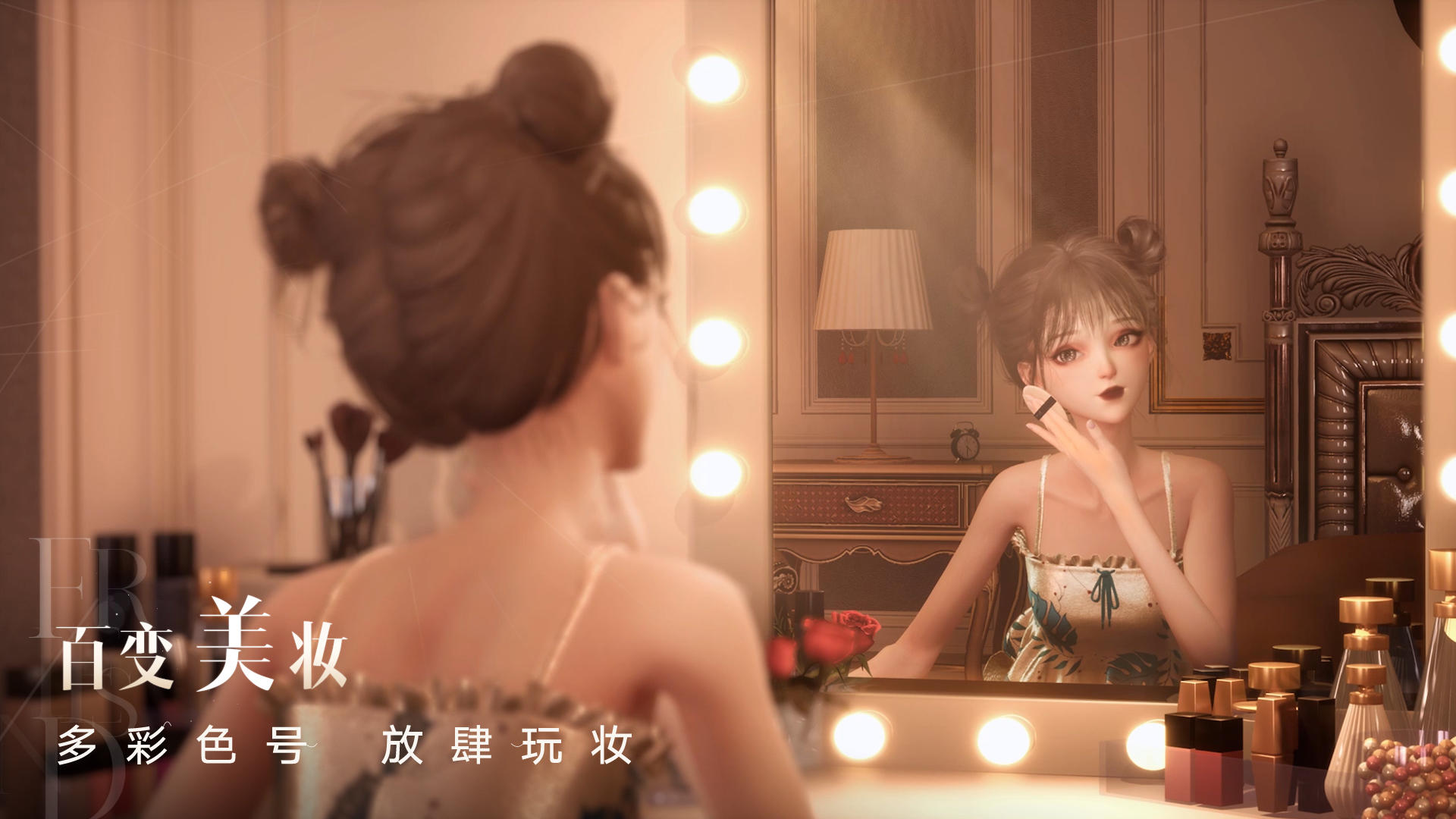 However, the change-up mobile game itself pays more attention to the characteristics of the picture, which determines that the next generation must be the development direction of this category. Therefore, for small and medium manufacturers who are still trying to enter this track, the living space left for 2D games has increased. Less. Unless you can create surprises in the second dimension or other very stylized themes, under the blow of the next generation of dimensionality reduction, once players experience 3D dress-up mobile games, it is difficult to return to the 2D era. 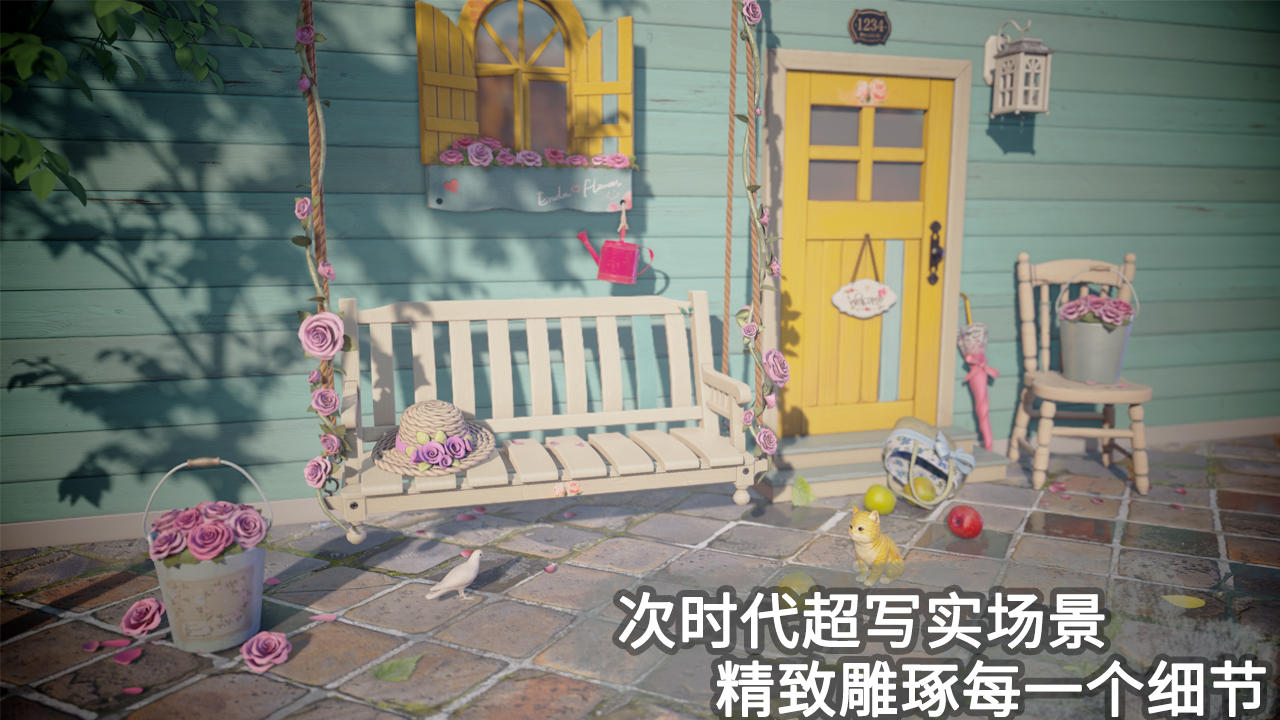 Therefore, although the promotion of next-generation mobile games among female players will take some time, with technological advancement, market development, and the change of the natural replacement cycle, game manufacturers should still pay attention to the quality of female mobile games, and continue to satisfy and even Only by creating demand can we be invincible in the increasingly fierce market competition.

Get some Horizon Forbidden West for Christmas