sensor tower: The overseas revenue of “PUBG Mobile” surpasses 3 billion, and it tops the list of revenue from overseas mobile games in October

The latest data from the Sensor Tower store intelligence platform shows that in October 2021, China’s mobile game products in the overseas market revenue and downloads rankings, the detailed list changes are as follows.

Revenue list of mobile games going to sea in October

Tencent’s “PUBG Mobile” October overseas revenue increased by 8.8% month-on-month to 96 million U.S. dollars, returning to the top of the overseas mobile game revenue list. As of the end of October, the cumulative overseas revenue of the game has exceeded 3 billion U.S. dollars, and it is the current record holder for the highest overseas revenue of Chinese mobile games. At the same time, “PUBG Mobile” has also become the pioneer of the Turkish tactical competitive mobile game trend. In the past year, revenue from the Turkish market has increased by 287%, surpassing Japan and Saudi Arabia, and second only to the United States, becoming the second-largest market for the game’s revenue.

In this issue, the “Call of Duty Mobile Game” jointly launched by Tencent Tianmei Studio and Activision Blizzard ushered in the 2nd anniversary of its listing. With a wealth of in-game activities and the 9th season, the game’s revenue increased by 38.8% month-on-month, returning to the top three in the revenue list.

Due to its outstanding performance in the Japanese market, the overseas revenue of Lingxi Interactive Entertainment’s “Three Kingdoms: Strategic Edition” in October increased by 35.7% from the previous month, and its ranking on the overseas list rose by 3 places to 8th. With the launch of the new content of “Tide No.”, the overseas revenue of this issue of “Tomorrow’s Ark” increased by 185% from the previous month, returning to the 16th place on the list.

Thanks to the continuous launch of the 6th anniversary commemorative card, the revenue of Le Element’s “Idol Dream Festival!! Music” increased by 30.8% month-on-month, and its ranking rose by 5 places to 18.

Since August, Xinghe Interactive Entertainment’s SLG mobile game “Little Ant Kingdom” has performed solidly in revenue. Driven by the Halloween event at the end of October, the game’s daily turnover reached a new peak, and November revenue may hit a new high.

In terms of revenue growth, NetEase’s new SLG game “The Lord of the Rings: War” has been steadily growing since its launch in overseas markets at the end of September, and it has jumped to the fourth place in the list of revenue growth from overseas trips in October. Consistent with the strong appeal of “Lord of the Rings” IP, the top three markets for the game’s revenue are the United States, Germany and the United Kingdom, contributing 43.2%, 9.6% and 9.4% of October revenue respectively.

Mutong Technology placed the mobile game “Mobile Legends: Adventure” (심포니오브에픽) on the Korean market in mid-October, and reached the top 5 Korean mobile game bestseller list at the end of October. In this period, the game’s revenue increased by 51.8% from the previous month, and ranked 31st in the list of marine mobile games revenue.

37 Mutual Entertainment Doomsday Theme Strategy + Elimination Mobile Game “Puzzles & Survival” has been on the market for one year, and its revenue has repeatedly hit record highs, and this issue is no exception. In October, the game’s revenue increased by 9.5% from the previous month, locking in the 5th place in the revenue list and ranking 8th in the growth list. 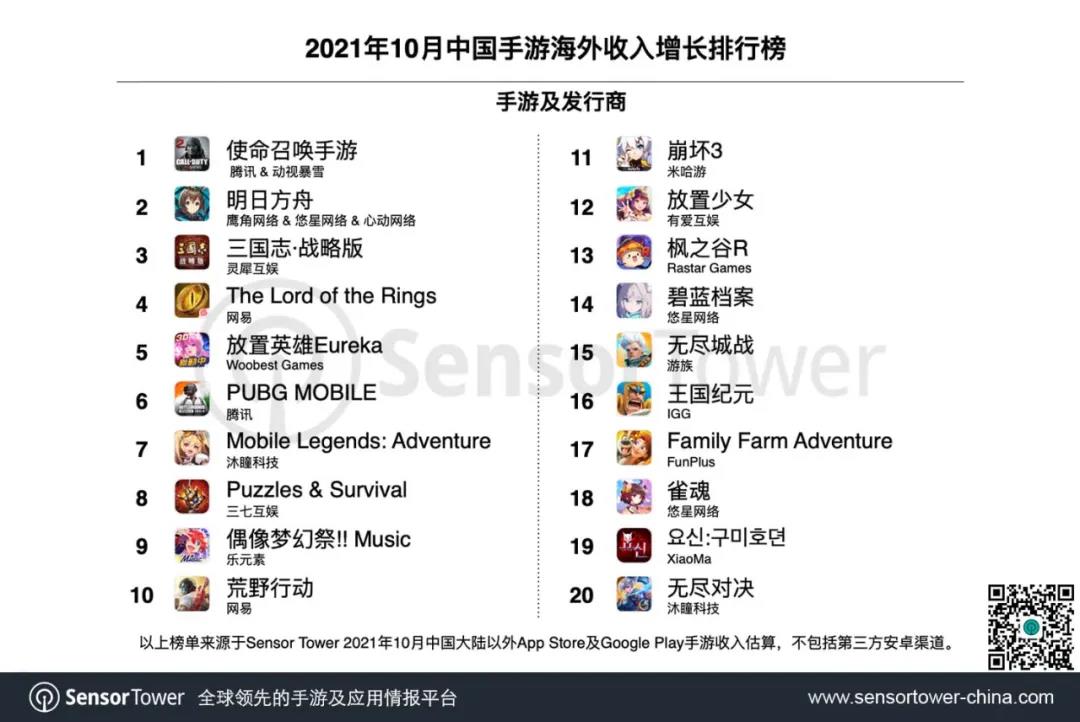 Thanks to its performance in the South Korean market, the revenue of the SLG mobile game “Infinity Kingdom”, an online civilization theme SLG, surged 72.6% month-on-month, making it a 15th place in the growth list.

FunPlus “Family Farm Adventure”, on the basis of a 31.2% increase in revenue in September, increased by 29.3% to 10.7 million U.S. dollars. It is ranked 36th in the list of overseas revenues and is the highest-paid overseas simulation operator so far. tour.

Tencent’s “PUBG Mobile” has been downloaded more than 12.6 million times overseas in October, and it continues to top the list.

The sports game “Soccer Super Star” has been downloaded more than 6.6 million times, ranking fourth on the list. The top three markets for downloads are Brazil, India, and Indonesia, accounting for 12%, 9%, and 8.3%, respectively. 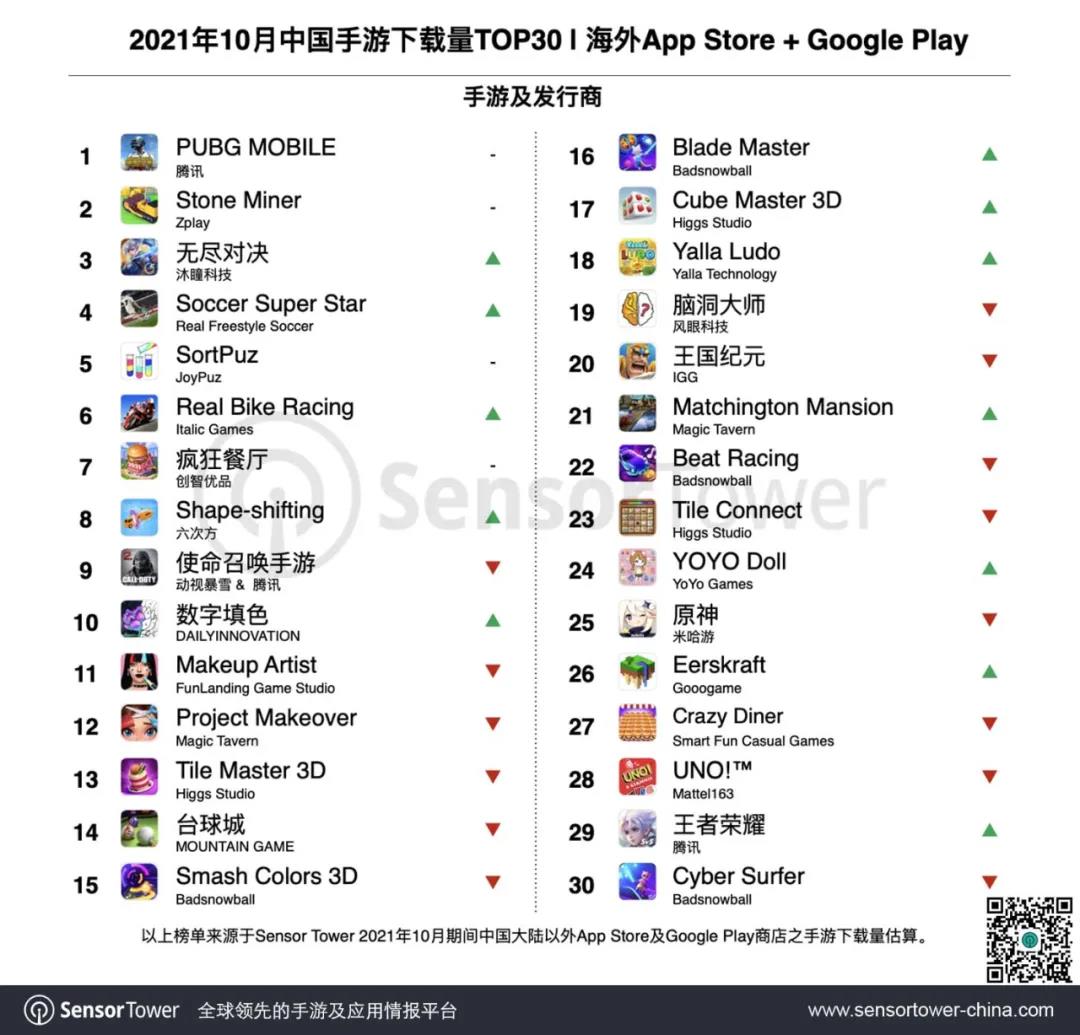 In addition, the products that were shortlisted for the first time included the Higgs Studio elimination mobile game “Cube Master 3D” and the dress-up mobile game “YOYO Doll: Dress up games”.