Four tests! Did you succeed in “Magic Tower” that you want to make friends with two-dimensional players?

GameLook report/There is only less than two months left before the end of 2021. However, in the eyes of the two-dimensional players, their expectations for this year are far from reaching the end. Ask them what they are waiting for, it is naturally “The Magic Tower”.

In the third-quarter financial report of Perfect World, “Magic Tower” was also regarded as an important increase in the company’s fourth-quarter revenue. Not surprisingly, this light sci-fi open world game that is full of topics in the two-dimensional player community will be officially launched before the end of the year.

After the third test in July, the “Bald” development team once again carried out an earth-shaking transformation of the game. From plot character design, art performance to gameplay and performance optimization, after more than three months of re-engineering, “Phantom Tower” also opened today the “Suppressor·Ultimate Test” (fourth test). As the last test before the official launch, the performance of “Phantom Tower” has also attracted the attention of nearly 13 million reserved players.

The author, who obtained the four-test activation code based on actual (luck) strength (qi), also tried it for the first time. After the experience, the author thinks that this time “Phantom Tower” seems to want to tell a story that only belongs to me. , Make a real friend with domestic two-dimensional players.

To talk about the most impressive thing about “Phantom Tower” in the previous test, the number one place is probably “Fried Service”. From the first test to the third test, the server has become the most troublesome existence for the “Phantom Tower” team than the players’ opinions are difficult to adjust. Therefore, before the fourth test, the operation team simply prepared a “exploding service insurance” for the players: if the service is still exploded after the service is opened today, all test players will receive extremely precious 10 golden cores as compensation. Even if it did not explode, there was a “safe landing” reward of 6,666 gold coins.

Play on the real machine 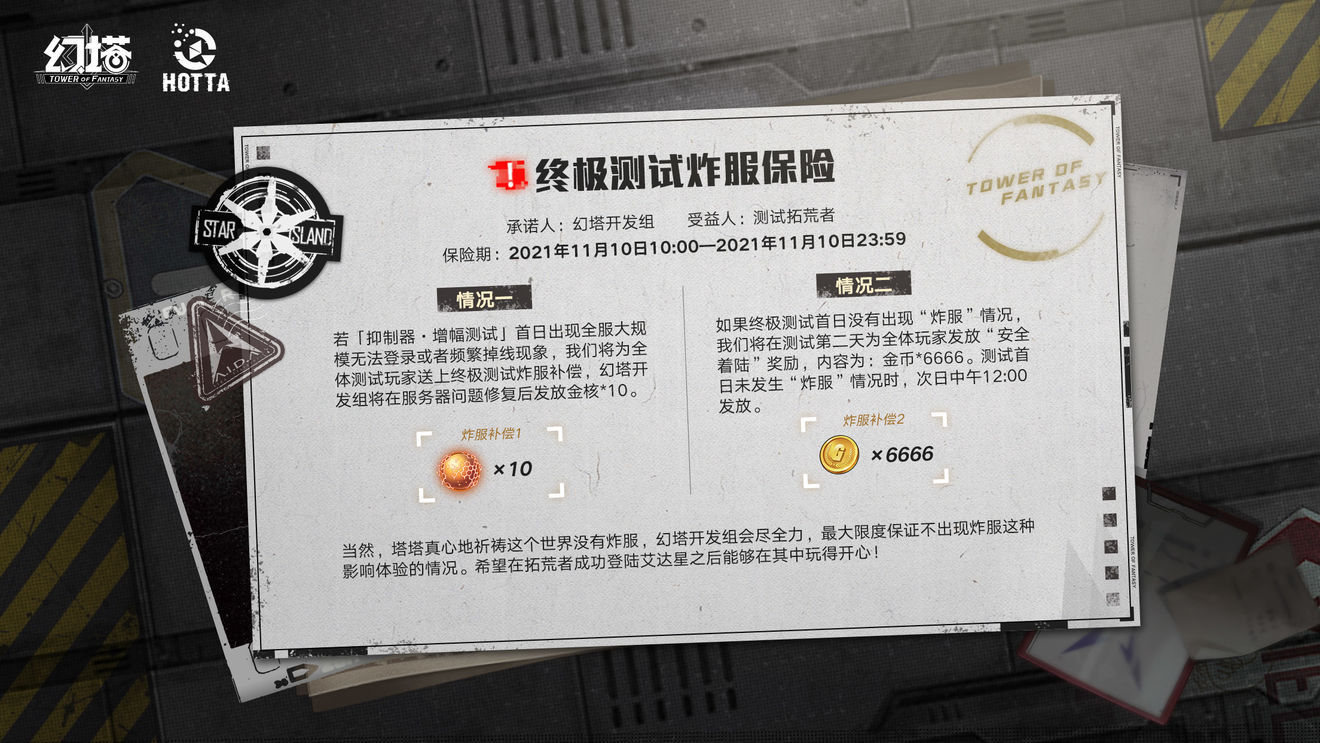 What makes the players “regret” is that in the end “Phantom Tower” did not blow up the server, most of the players entered the game smoothly in the first time, and the few players who were blocked in the login interface also got it after a short queue. Opportunity to experience. In order to further reduce the burden on the server when opening the server, this time “Phantom Tower” also opened the pre-pinching function, so many players who downloaded the game in advance pinched their faces while bluntly saying, “I can play this face pinching system for a year.”

Years of MMORPG development experience has made the face-squeezing system of “Phantom Tower” a very high degree of freedom. It is especially commendable that all the parts involving colors have a complete color wheel for players to choose colors freely. For the remnant party, the official also provides popular matches from other players. On this basis, you can make a simple color adjustment to form a trendy personality that is exclusive to you.

After entering the game, Sally’s new look is undoubtedly the most eye-catching change in “Phantom Tower”.

As one of the most important NPCs in the game, Sally is not only a key role in promoting the development of the plot, but also the closest partner to the player in the growth process. Sally, who was frantically complained by the players in the first test, looked like this: 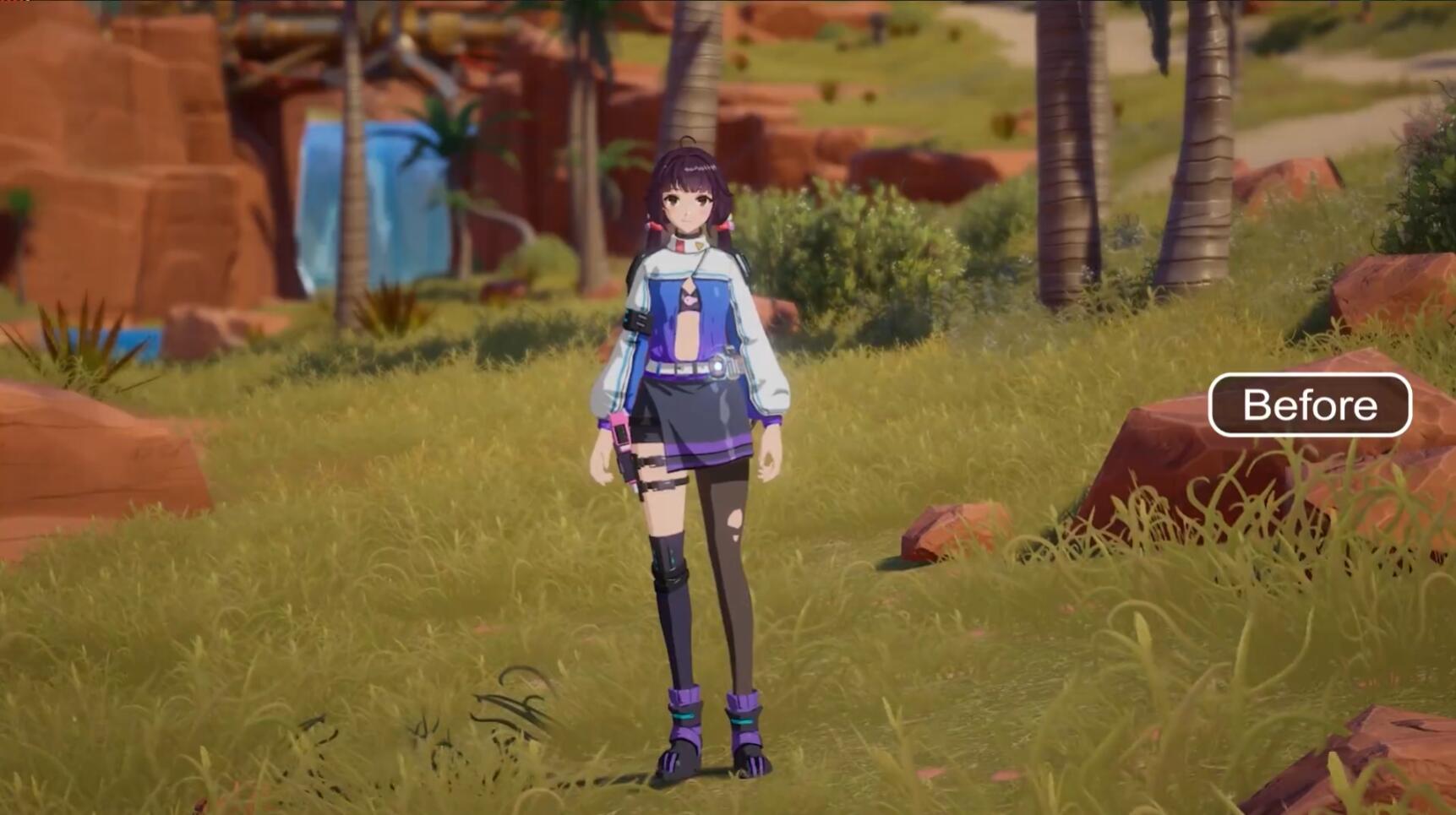 Regardless of the personality, such an appearance is also qualified as a role in a two-dimensional game. But if I tell you that Sally is actually a lively and cheerful “troublemaker” in the game, this kind of appearance seems to be somewhat inconsistent with her personality traits. So, after fully listening to the opinions of the players, Sally in the second test became like this: 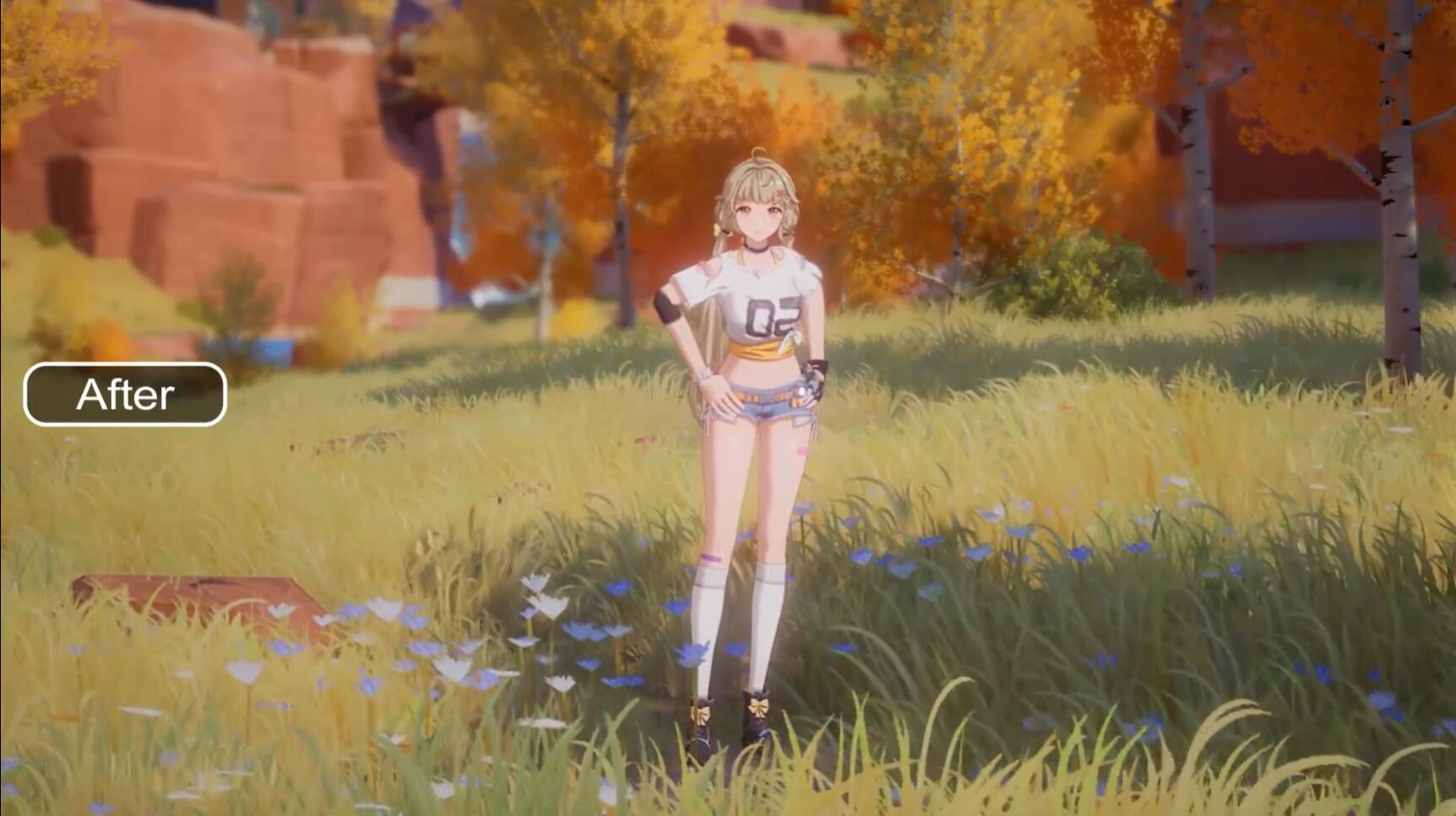 Navel dress + long legs, this setting not only directly pokes the appetite of LSPs, but also undoubtedly makes Sally’s quirky personality more distinctive. However, this over-fashionable outfit made Sally’s gentle and innocent side somewhat faded, so Sally in the fourth test wore a denim skirt and brought a doll. The new look of the girl next door was also Let players experience the story of “Phantom Tower” more realistic.

From the first test to the fourth test, the three completely different outfits seem to be just changes in the art style, but they actually reflect the simple wish of “Phantom Tower” to tell a good story. After a year of polishing, Sally no longer It exists to satisfy the fantasies of the players, but has become what she should have been in the story.

MMORPG games often use automatic path finding as a selling point in order to avoid the cumbersome process of running diagrams for players, but in the world of “Phantom Tower”, running diagrams has also become a part of good storytelling.

In the early stage of the game, players will be familiar with the game environment and the game mechanics under the leadership of Sally, and running graphs with Sally has thus become a very interesting experience. Part of the missions will be interspersed with dialogues between Sally and the players in the process of running the map, and the players will be “routines” by Sally from time to time, and the emotional bond with Sally will gradually heat up in the running and chasing.

Of course, another big meaning of running maps is to appreciate the beauty of Ida Star. Compared with the previous tests, the upgrade of the big world scene is focused on the weather and light and shadow performance. The higher contrast makes the weather changes and the day-night alternation in the game more immersive and strong, which also has an impact on the development of the plot. Obvious contrasting effect.

In order to enrich the running experience, the official even held a creative solicitation event in September, inviting players to propose special vehicles that they hope to add to the game. In the game, players can already experience many distinctive “parkour” items, such as the drone that can carry people in the early stages of the game, or the jetpack that Sally lent to the player.

Contrary to the ease of running maps, the combat system of “Phantom Tower” is full of tension. After many adjustments, today’s combat special effects have made significant improvements in the sense of strike and visual presentation, and the combat process is relatively smooth. In addition to basic attacks and dodges, the combo techniques between weapons and weapons are powerful and creative. Full.

Weapon mimicry can be described as one of the most distinctive systems in “Phantom Tower”. Different from other two-dimensional games, which use character extraction as the core selling point, in order to tell a good story, “Phantom Tower” does not set up additional characters to interfere with the player’s experience of the main story. Therefore, weapon mimicry has become the main way for players to experience different character images. 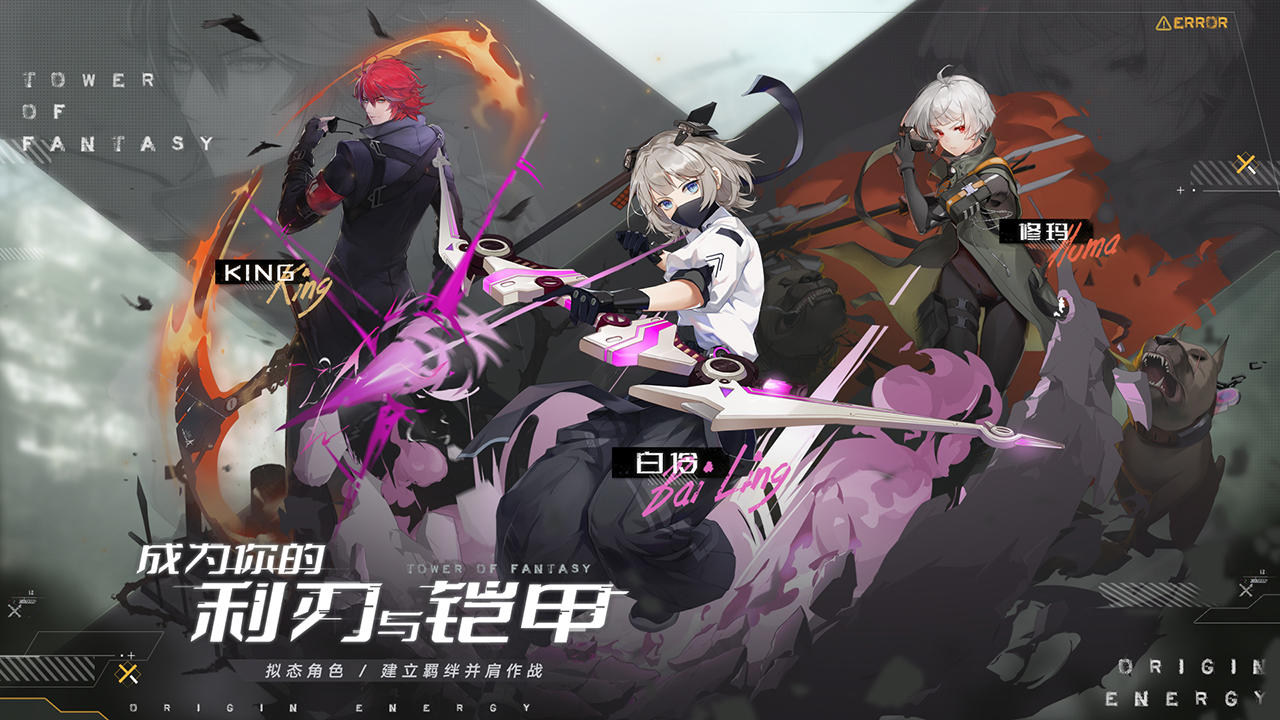 By acquiring weapons that support mimicry, players can turn on their mimicry image to fight when using the corresponding weapons. In this fourth test, the development team not only upgraded the existing mimicry image, but also introduced a new second-order form for some mimic weapons. Compared with the first-order, the second-order form can be described as “different from two people” in appearance, full of sincerity.

On the whole, the four-test “Fantasy Tower” has shown the vision of “telling a good story” in all aspects, and from the role to the gameplay, it has gradually formed distinct “Fantasy Tower features” and its unique products. Competitiveness.

Those who have followed the development process of “Phantom Tower” are naturally familiar with the “Bald Head List”. Since there were too many areas criticized by players in the early version, the development team who knew they were wrong and corrected them chose to record the rectifications one by one and publish a “list” of all the adjustments. From the first test to the fourth test, this seemingly very simple method has received significant results. After a little bit of adjustment and optimization, the current “Phantom Tower” is no longer what it used to be. A higher and lower foundation with the front runners on the dimensional circuit.

Judging from the feedback from players, on devices with weaker performance, there have also been cases of lagging in battles and running charts, which has also caused a significant impact on the player’s gaming experience.

Considering that this year’s new product launch conferences for domestic mobile phones like to take the “Original God” run score and power consumption performance, the current performance problems of the open world 3D mobile game may not be solved by “Phantom Tower” alone. Fortunately, this game also supports the PC side. The 12GB installation package size of the PC interoperable version also shows from the side that this game is indeed a “next generation” for the mobile terminal.

In the era of high-quality games, such detailed performance is increasingly becoming an important criterion for players to judge the quality of games. Therefore, after continuous subversive innovations, “Fantasy Tower” has initially met the basic needs of players for two-dimensional open world games. There is still a lot of room for optimization. The sincerity and new surprises embodied in “Baldness”, if you want to truly satisfy the players, apart from telling your own story, perseverance may be a more effective and long-term way. .

Vampire: The Masquerade Swansong Postponed to May 2022

Xbox Games with Gold – Games for the month of December 2021