Low-key development for 2 years, against Tencent NetEase, will this free tool created by TapTap become popular?

GameLook reported/mentioned game accelerators. Most people know that this type of product may be after the explosion of PlayerUnknown’s Battlegrounds in 2017. Steam and a number of overseas multiplayer games have emerged. Accelerators have become important for domestic players to be able to play smoothly. One of the means.

As the concept of accelerators became more and more popular among players, over time, players began to ridicule and ridicule the initial “monthly payment” and gradually regarded it as a normal state.

The Tap accelerator launched by the game community TapTap is a very low-key diving player in the accelerator market. According to GameLook, relying on the free strategy, the Tap accelerator seems to be becoming a must-have tool for many domestic players. The development of Tap Accelerator has in turn fed the TapTap community and Xindong’s distribution business.

What is Tap accelerator? What is the difference?

It stands to reason that there are already many accelerator products in the market and a solid user base and base. So how does the Tap accelerator break through the market?

In terms of time, the launch of the Tap accelerator is not too early, but GameLook believes that this accelerator still has many features and advantages, one of which is streamlining.

In the main interface, Tap Accelerator will automatically identify the games that have been installed on the phone. In normal mode, some updated content and new version information will be displayed below some applications, while in the streamlined mode, these related content are all folded , The entire application interface is clean and refreshing. 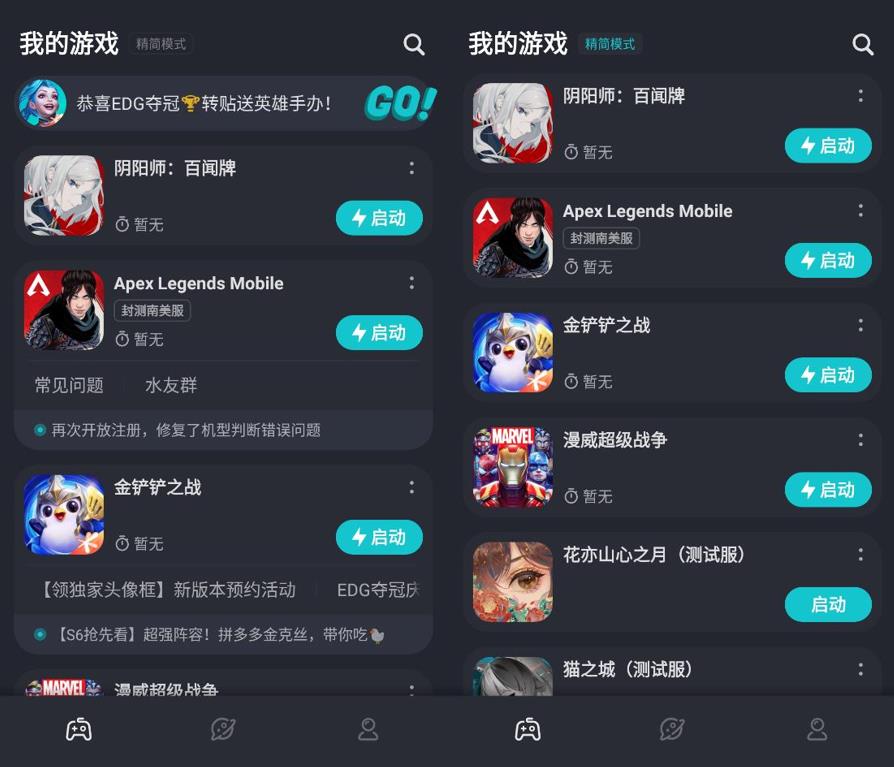 In addition to the local applications on the player’s mobile phone, the Tap accelerator also has an exploration and discovery section, where players can find games in other regions. If the player clicks on the search bar, a batch of new games that have recently been put on the shelves will also be displayed below, and the player clicks on the browse window to jump to the corresponding product page in TapTap. 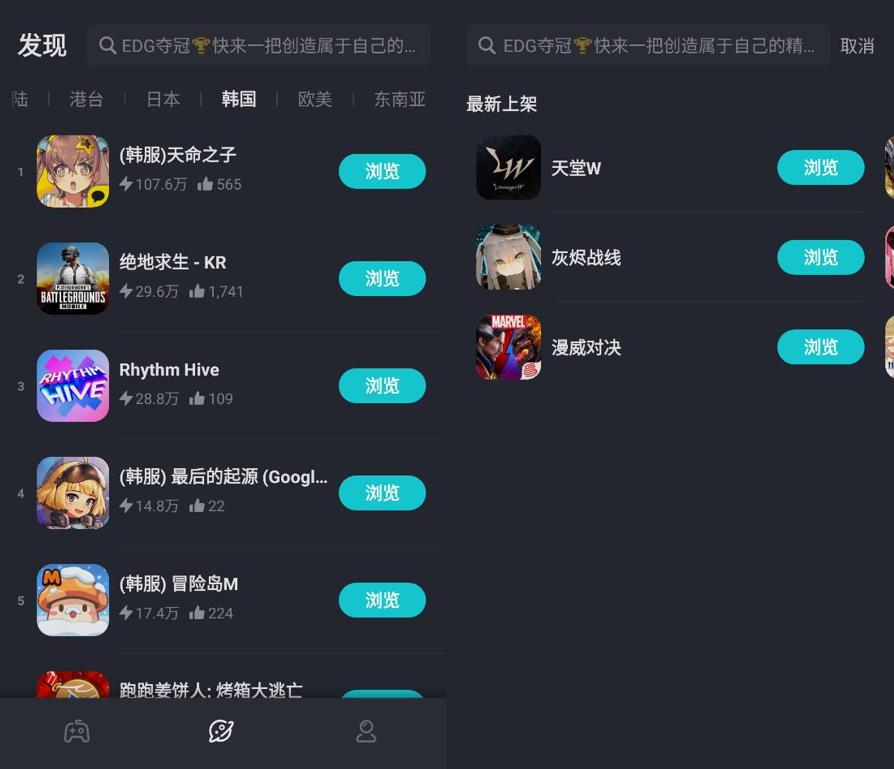 Since TapTap does not provide overseas game download services, if players want to download and install related games, they must go to related overseas platforms or websites to download. Tap accelerator only provides acceleration and discovery functions.

In addition, GameLook also noticed that in addition to the network acceleration function of mobile games, the Tap accelerator also provides some other services, such as tools to solve the problem of missing Google framework. And Nintendo Switch game acceleration, but there are not many Switch game products that can be accelerated at present, and it may be further enriched in the future. 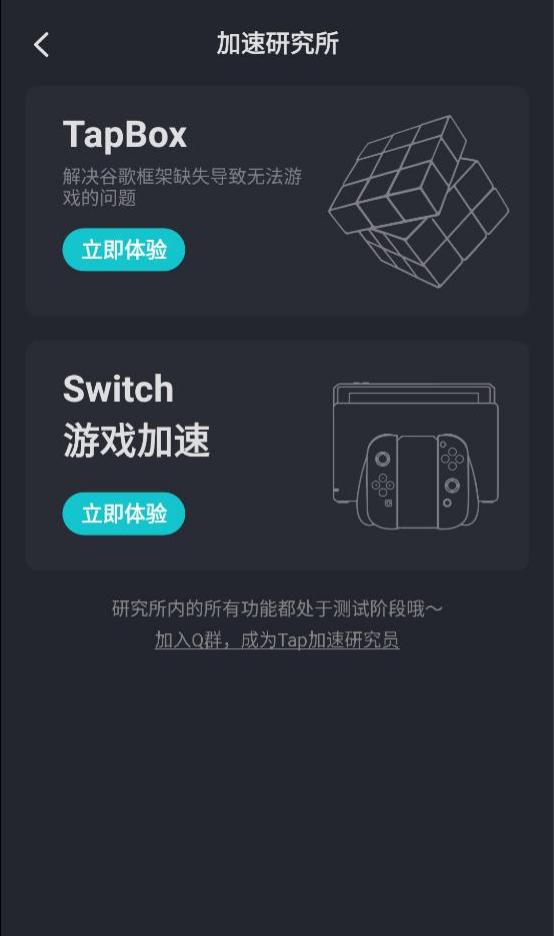 In addition to the refreshing and concise interface, another major feature of the Tap accelerator is cost-effective.

Currently, Tap Accelerator does not have any recharge window, nor does it have various paid subscription services such as monthly cards and annual cards. If players want to accelerate overseas game products, they must first obtain the global acceleration time.

However, the way to obtain user time is very easy. Users can get time by inviting new users, doing tasks, and occasionally holding events. 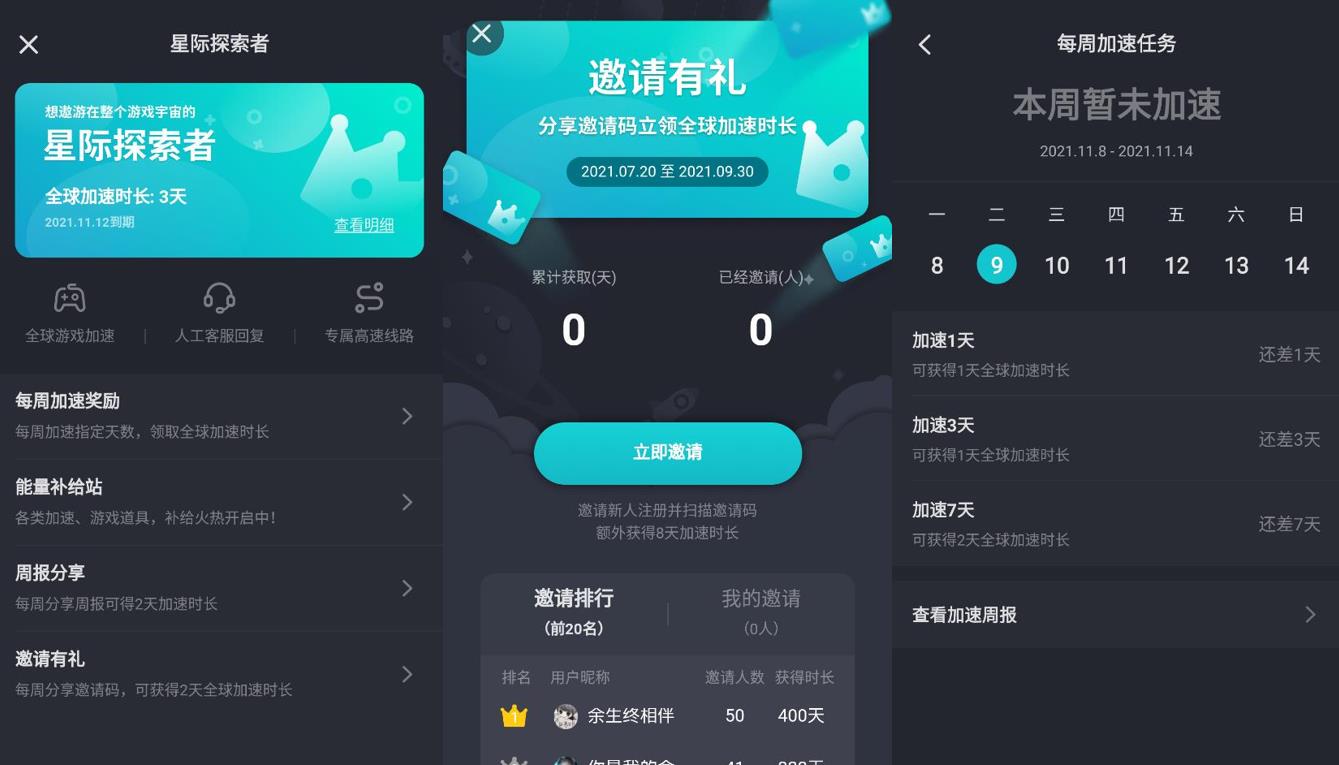 In terms of accelerated performance, although there is no charge, the Tap accelerator shows the same quality as the mainstream accelerators on the market. The network performance is relatively stable throughout the process, and there are basically few disconnections. Free + high-quality acceleration makes this product cost-effective.

From the current point of view, the positioning of the Tap accelerator should still be at the level of promoting the community ecology of TapTap. On the one hand, it optimizes the network level of domestic game products. On the other hand, although overseas games do not provide downloads, players can obtain them through other channels. It gives players an opportunity to experience, which encourages players to discuss and communicate in the corresponding game interface, and promote the formation and prosperity of the community ecology.

In the future, it is not yet known whether the Tap accelerator will use advertising, value-added services and other monetization methods. It is worth noting that in the Zhihu topic “Why are there free accelerators in the market?”, from the official answer of Tap Accelerator, maybe for a long time, Tap Accelerator will maintain the strategy of ecological priority.

From niche to popular, what has the game accelerator experienced?

As mentioned at the beginning, the popularity of PlayerUnknown’s Battlegrounds and the Steam platform can be said to be an inflection point for game accelerator applications, but in fact, game accelerators existed as early as the initial stage of Chinese online games, but at that time most of the mainstream domestic game products They are all MMOs, so many accelerators will give away some in-game props to attract users.

Then, with the rise of competitive games represented by “League of Legends”, network delays have a great impact on operation and gameplay. Some network conditions are not very good and some players who pursue the ultimate have gradually come into contact with related products. Some online game accelerators have been exposed to related products. Players are familiar with the fact that Xunyou Accelerator was built into the “League of Legends” client for a short period of time, and it became the first impression of many players on the accelerator.

Even so, the positioning of game accelerators has always been very awkward. After all, although the delay is high, it can still be overcome, and it has not reached the point where it cannot be played. Coupled with the continuous maturity of domestic network infrastructure, the delay problem of domestic games is gradually being overcome. .

However, the market for game accelerators is still huge. For example, Netease and Tencent have launched game accelerators. In addition, some well-known Internet companies, such as Xunlei, have all deployed their products, and the form and commercialization of their products have been presented. There are different forms, such as some billing on a monthly, quarterly, and annual basis, and some billing on a duration basis, and the billing can be stopped when not in use. 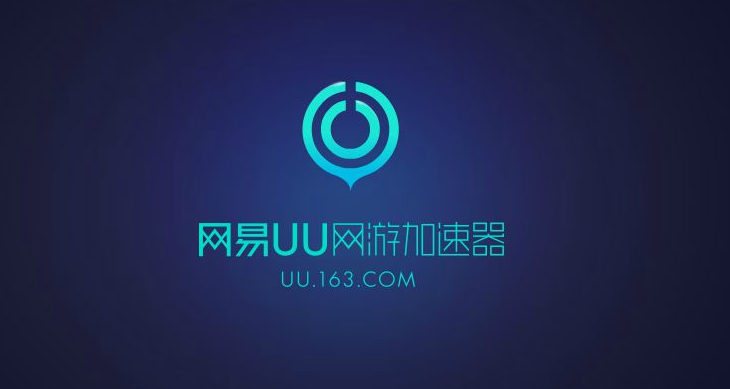 So, why can today’s game accelerators form such a huge market?

As the saying goes, there will be a market when there is demand. From a market perspective, the reason why game accelerators are sought after is because of the lack of domestic PC-side game products.

Under the background of the regulation of the total version number and the large number of domestic game companies turning to the mobile game track, the new domestic flagship mobile game products have almost disappeared. On the other hand, consoles and PCs are still the mainstream overseas game markets, so they are still There are a large number of new products produced, but most of them are on overseas game platforms such as Steam and Epic Game Store.

For domestic players, these game products have some common problems, such as multiplayer games. Because they have not entered the Chinese mainland market, they generally do not set up servers in the mainland. Domestic players either have extremely high latency and poor experience, or they cannot directly enter the game. .

In addition, many overseas games will have their own platforms built in. At the same time, the network services of these platforms are very unsatisfactory. For example, R Star’s Social club, EA’s Rotten Orange, Ubisoft’s Uplay, etc. are almost players’ nightmares. 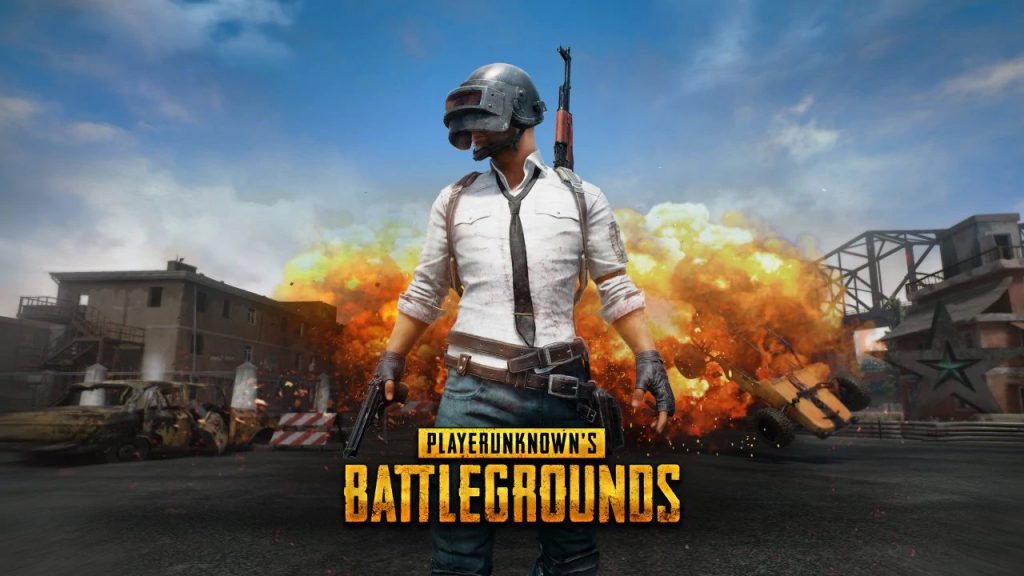 In comparison, game accelerators have become the main means to solve this problem, and for most end game players, the accelerator charging model is still acceptable. In the words of the player, the original price of 3A was spent. Is it still a step behind the accelerator?

On the other hand, with the increasing number of users of Steam, some small and medium-sized PC game developers also use it as the main game distribution channel, thus forming a cycle and accelerating the market demand for game accelerators.

In addition, Android simulations on the market generally have an accelerator function, which has also enabled many players to access some overseas high-quality mobile game products through PC simulators, which has promoted the rigid demand for mobile game accelerators.

Of course, although the users are huge, game accelerators also have some risks. For example, some overseas games ban users who use accelerators, and some will start account protection mechanisms due to frequent changes of IP addresses. The author has caused frequent switch nodes. “Apex Hero” account is banned.

In a word, the huge market demand has promoted the game accelerator market, but its emergence has also created many new problems that have not yet been solved.

When the game goes to sea, Chinese players are also “going to sea”

In the early years, many accelerators used to play the banner of “playing overseas games freely”. This actually reflects that in addition to the user positioning of game accelerators, in addition to the lack of PC products, they actually went to foreign servers to try new games and actively “go out to sea”. Looking for and experiencing some of the hot products of overseas products is also an important factor for Chinese players to choose such products.

On the one hand, some game products may still have some localization and publisher selection work before entering mainland China, and there will inevitably be a time gap, which has caused many players to try out foreign servers.

Because these two products have the IP background of “League of Legends” and are very popular in China, when the two games were launched overseas, they caused a large number of domestic players to try their best. The huge demand even stimulated the download of mobile game accelerators. For example, NetEase UU and Tencent mobile game accelerator have seen a surge in downloads at these two time nodes. 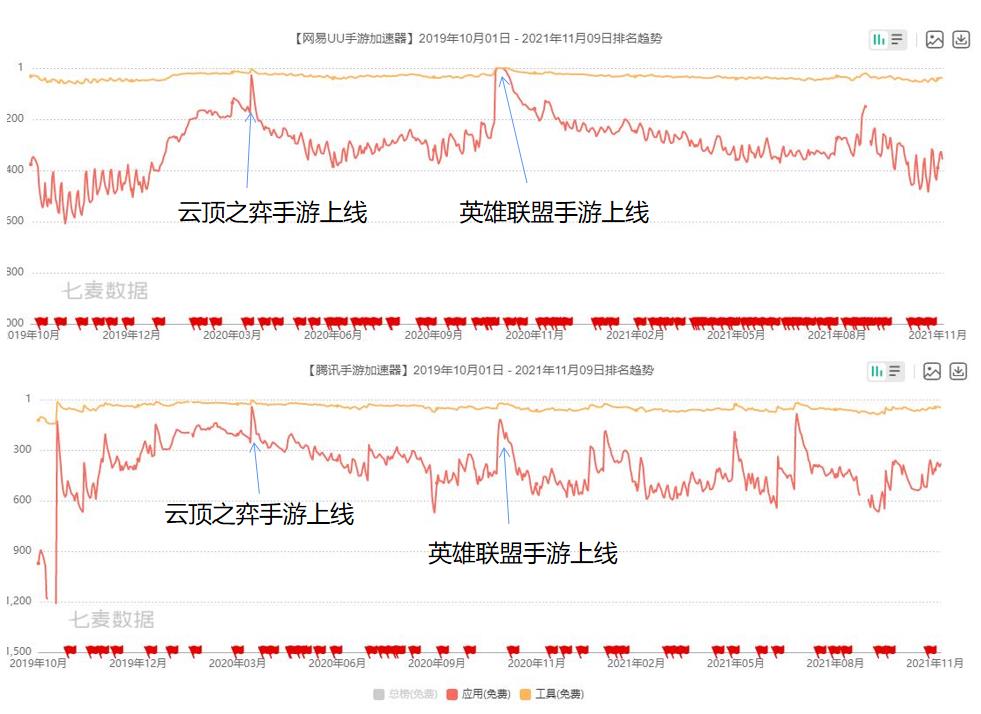 On the other hand, some players are also very happy to explore some relatively niche products. Perhaps the most representative one is “F/GO”.

At the same time, under the wave of globalization, more and more game companies are gradually seeing the potential of the Chinese market. In order to cater to Chinese players, they have done a lot of localization work in their games, such as “Cyberpunk 2077” and “Apex”. Simplified Chinese subtitles and voice are fully covered in “Hero”.

With the popularity of overseas global game platforms such as Steam, Google Play, and AppStore, the only barriers for players to play these games are network issues, and the emergence of game accelerators fills this gap.

In fact, the network problem reflected behind the accelerator is also a comprehensive and global problem, and there are differences in regulations and policies in different countries and regions, and the game accelerator has become a very subtle solution, although Treating symptoms is not a permanent cure, but players actually don’t really pursue “cure the root cause”, and being able to play may be the real need of most players.

RAIN CODE is the new project of Kazutaka Kodaka