One year after the 3.0 iteration, “Three Kingdoms: Strategic Edition” once again opened up new possibilities for SLG

GameLook report/In 1992, the famous American science fiction master Neil Stephenson described his meta-universe concept for the first time in his novel “Avalanche”: “Put on headphones and eyepieces, find the connected terminal, and you can The way of a virtual clone enters a virtual space that is simulated by a computer and parallel to the real world.”

With the listing of Roblox, the concept of meta universe has been fired again in the past two years. However, unlike the ideal science fiction vision of many people, the VR-like headset in the anime “Sword Art Online” is not the core breaking point of the meta universe.

More and more people have discovered that the core of Metaverse lies not in hardware, but in the content experience provided by software. The biggest feature of this new concept is actually a virtual experience that can break the boundary between reality and virtual through a highly immersive experience.

For example, the “Military Fighting for Geographical Advantage” script introduces a real terrain system in addition to the traditional confrontation between the two armies; the added personality system, alliance buildings, alliance strategies, and mountain road crossing bridges in the “North Ding Zhongyuan” script will give players more The personalized war style allows players to have a deeper and more global strategic choice in the troubled times.

As a typical sand table strategy game, the historical restoration of the characters of the Three Kingdoms, the geographical location, and the high degree of freedom of strategy selection make “Three Kingdoms: Strategy Edition” the most “highly immersive” SLG game under the existing technical conditions. . More and more free, diversified, and three-dimensional war strategy choices have made the battlefield in the game closer and closer to the Three Kingdoms in real history.

Introduce a personality system and focus on player growth

Faced with the intractable user needs, how to realize each “Three Kingdoms Dream” is a very challenging problem. In the recently updated “Beijing Central Plains” script, “Three Kingdoms: Strategy Edition” tries to use a personality system to allow players of different styles to find their own unique ways of growth.

For combat players who want to make a contribution on the battlefield, choosing the military genre can increase the efficiency of conscription, and the ultimate skill “recruit and surrender” can also turn the opponent’s force into your own reserve after winning, allowing you to “more courageously”. 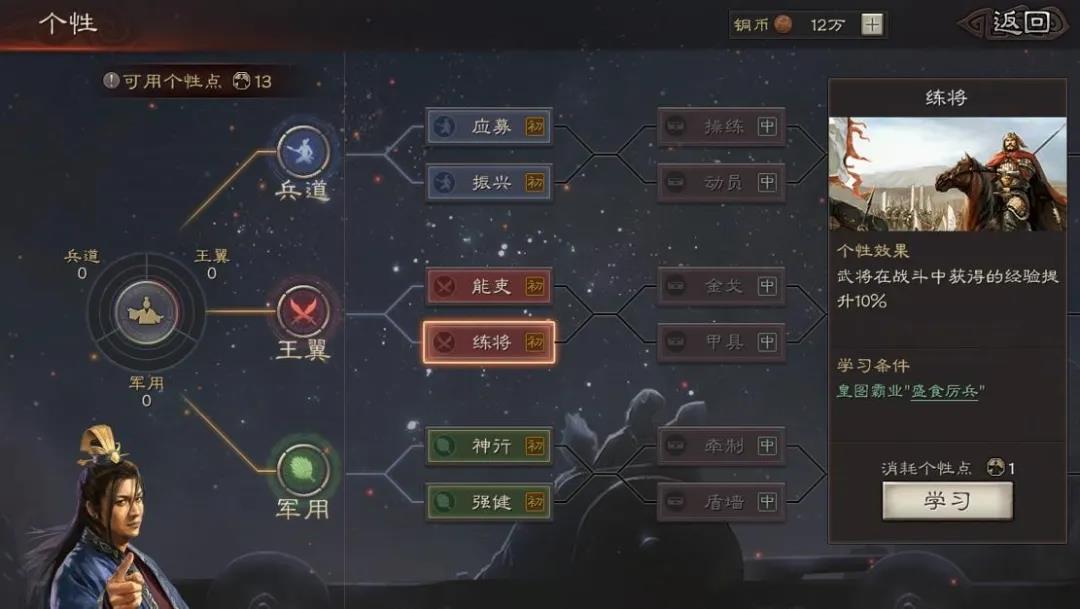 If it is to develop with peace of mind and enhance personal strength, you can use Wang Yi genre skills to enhance the strength of the generals in battle, and even use the ultimate skill “women” to greatly enhance the attributes of female generals, and develop more “non-mainstream” lineups with surprising success. 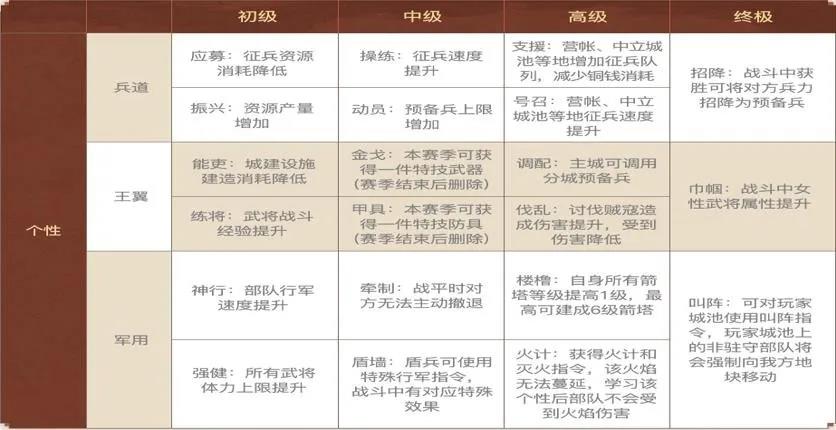 Of course, war is never a person’s business. For “team dedication” players, you can choose military genres to increase the marching speed and contain the enemy’s movement. You can even use the “squad” skill to call the enemy (non-garrison troops) into the city to force a battle during a tough battle. Allies’ siege losses are minimized.

It is not an exaggeration to say that while creating a sense of presence in the ancient Three Kingdoms War, the script of “Beijing Central Plains” also gave players the possibility of truly changing history through the game through a personality system.

For example, you can use alliance buildings to increase resource output, and use the “women” skills to use female generals in the Northern Expedition to solve the dilemma of “Yizhou fatigue”, “No general in Shu, Liao Hua as the vanguard” encountered during Zhuge Liang’s Northern Expedition; With the help of weather, terrain, and bridges to improve his strength, Cao Cao fulfilled the long-cherished wish of Cao Cao’s Southern Expedition, which was unfulfilled in his life.

In addition to the personality system, “Three Kingdoms: Strategy Edition” also added more elements to restore the authenticity of ancient wars in the new script.

The ancients believed that in order to win the war, “the right time, the right place and the people” are indispensable. Based on the previous terrain and weather, the 10 alliance buildings and 6 alliance strategies added during the “Northern Central Plains” season truly complemented the elements of ancient warfare.

Nongduwei’s Mansion, Warlord’s Mansion, Armory, Xianden Camp, Drum Array, etc., have further improved the impact of the right time and place on the war. For example, you can lead the enemy to the terrain of mountains and rivers, and rely on the enemy camp and terrain. Such buildings reduce the opponent’s combat effectiveness, and can even be “stealth” with the help of ambush camps in the timber territory, and the “jungle” gameplay can also be realized in the SLG game.

The six alliance strategies provided by the architecture of the Prime Minister’s Mansion make the element of “human harmony” stand out. In the middle and late game, the city’s nine palaces and gossip brought great resistance to the attack, but the “knowing the truth” strategy can temporarily invalidate the opponent’s gossip array and the nine palace map. It can achieve the effect of flexible deployment of troops, so that the siege war will not fall into a stalemate “tough battle.” 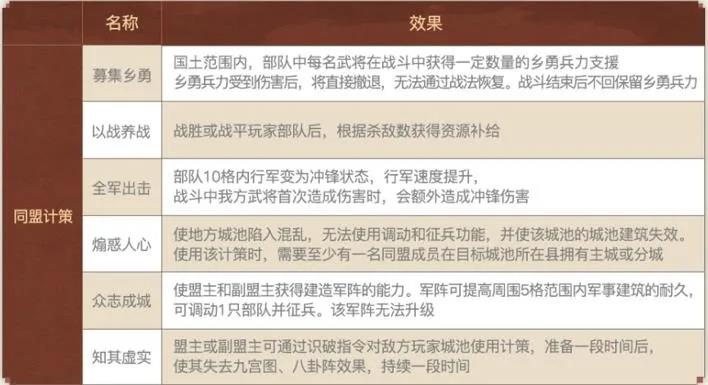 The alliance can even break through topographical restrictions under certain conditions, “open roads and bridges in mountains and rivers”, and “surprise them by surprise” by constructing mountain roads and crossing bridges.

If the previous upgrade allows the “Three Kingdoms: Strategy Edition” to fully interpret the “time and place” in ancient wars, then the added alliance gameplay in the “Northern Dingzhong Plain” script has raised the ancient war element of “human harmony” to a new level. The height of the war in the SLG has moved from military combat to overall confrontation such as attack, defense, and logistics.

According to the official statement, after the launch of SLG3.0, “Three Kingdoms: Strategy Edition” further deepened the game’s sense of war presence in the three levels of graphics, gameplay, and social interaction.

For example, the water war and fire attack gameplay added in the “Battle of Chibi” version, you can combine “Wind Prestige” and “Burning Boat to Repel the Enemy” to launch an amphibious offensive with the cooperation of the alliance and wind, and truly experience the “Remote Thinking of Gongjin… Between talking and laughing, the epic war scenes were wiped out in ashes.

For a war strategy game, the sense of presence of war depends to a greater extent on the depth of the player’s game strategy and the breadth of optional strategies. Regarding this point, the idea of ​​”Three Kingdoms: Strategy Edition” is to create a Three Kingdoms War experience closer to the real history by complementing the elements of “time, place, and people” in ancient wars after the concept of SLG3.0 was put forward.

In terms of the realism of war, the reason why many SLG experiences are monotonous is that most products have made maps into flat drawings: all battles are calculated by distance, from A to B and then go to war. In a real war, the relationship between marching speed, combat effectiveness and terrain is inseparable. This is also the reason why the script of “Military Struggle for Geographical Advantage” makes the author’s eyes shine.

This version adds four different terrains such as hills, forests, wetlands, and deserts, and each type of terrain will bring different restrictions to war.

For example, in the desert terrain with arid terrain and sparse vegetation, long-term marching will reduce morale; hilly terrain is not conducive to cavalry galloping and heavy vehicles passing through, which will lead to a decrease in marching speed; forest terrain is densely vegetation, and visibility is low after the army enters; wetland terrain The soil is soft and muddy, which will increase combat losses.

The addition of terrain makes the war no longer stay in front of the two armies. Players need to fully consider the impact of terrain restrictions on marching, supply and battle damage before the battle, and they can also cooperate with terrain and arms in many aspects. Bring unexpected results.

For example, the pikemen array can reduce the damage received in forest terrain, the use of cavalry in desert terrain can increase assault damage, and the uneven hills can hide ambushes. With the help of the new terrain, you can even reproduce the classic tactics of wooden doorway ambush and smuggling in the game.

After more than 2 years of continuous upgrades, “Three Kingdoms: Strategic Edition” gradually expanded the SLG’s warfare from one-sided military combat to all aspects that really affect the battle. After the 3.0 upgrade, this SLG mobile game really jumped out of the category of a single product, creating an increasingly immersive ancient Three Kingdoms universe for players.

As one of the categories with the longest existence in the industry and the highest market maturity, SLG has now grown from the initial niche gameplay to a pivotal category in the mobile game market. In the fiercely competitive SLG mobile game market, the “Three Kingdoms: Strategy Edition” is already the “leader”. In more than two years of launching, I have explored a set of my own methodology, that is, through gameplay innovation, and constantly adding new ones. The elements of the game gradually evolved into the “real ancient Three Kingdoms universe”.

For the R&D team, innovation has never been a “bad check” of lip service. To achieve innovation that meets the needs of players and bring a higher degree of freedom to the personalized experience of the Three Kingdoms War, it is necessary to make the game experience a sense of substitution and non-obtrusiveness, but also to ensure a sense of freshness.

Under such an updated idea, “Three Kingdoms: Strategy Edition” is based on real terrain and free marching, and real war experience as the basic board. In subsequent updates, the wind direction system representing the time of the day, the different terrain representing the right place, and the latest In the nine-season new script released, more attention is paid to the personality system of cooperation between people.

Today, “Three Kingdoms: Strategy Edition” has become a highly free strategy game. Players can choose to grow awkwardly, farm and open up wasteland, or they can choose to gallop on the battlefield, siege the city, and they can also choose to walk horizontally and horizontally, lobby the world…..

As the mobile game market enters the inventory stage, head games have become the key to determining category market capacity and user levels, and good products have become the source of power to lead the market and drive market development.

As an innovator of SLG gameplay, “Three Kingdoms: Strategy Edition” has never been satisfied with the achievements it has achieved, but constantly surpasses itself, and always tries to expand the boundaries of category gameplay innovation with a higher degree of strategic freedom on the basis of SLG 3.0. It presents players with an increasingly immersive experience of ancient warfare.

GameLook believes that in the not-too-distant future, “Three Kingdoms: Strategy Edition” will increasingly become a platform and bridge that carries players’ real and virtual scenes.