To live up to the player’s 22-month wait, this “exceeding quality” domestic solo sequel is on fire and has received rave reviews!

GameLook report/Being out! On November 12th, “Bright Memory: Infinite” (hereinafter referred to as “Infinite”) developed by the domestic independent developer FYQD-Studio was launched on Steam at a national price of 48 yuan. Players who have purchased the previous game “Bright Memories” can get this orthodox sequel for free.

Feiyan Archipelago, an independent developer who has a reputation for “one-man research and development of domestic masterpieces”, released the previous work “Bright Memories” in 2019. The excellent game graphics and exciting combat actions made this game available on the day of release. With a transaction volume of 20,000 transactions, it ranked first on the Steam best-selling list, and it also received a large number of players’ praise.

After 22 months, “Infinity” reappeared in a more complete posture. Not only has the volume of the process reached more than three times that of the previous game, but also redesigned the game’s world view, battles, and levels. Said it is a brand new game. The developer also said: “”Bright Memory: Infinite” represents the peak of FYQD-Studio’s growth.”

Players who have played this game invariably hailed “Niu X” and “Light of National Products”. 93% of the players gave this game a good comment. By the time of publication, the number of people online on Steam at the same time has exceeded 22,000. People continue to rise.

In recent years, domestic games have brought too many surprises to players. This time, Feiyan Islands Studio has set the players’ eyes on the field of action FPS, and once again ignited the fighting enthusiasm of countless players with ingenuity, representing The pinnacle of quality that domestic games can achieve.

The refreshing Combo is overwhelming, and the action FPS can have such tricks

“Infinity” sets the background of the story in 2036. The black hole-like matter that appears out of thin air in the sky is beyond the scope of scientific explanation. An organization called the “Supernatural Science Research Organization (SRO)” began to send team members to investigate, and the player plays The character “Qin Shuya” went there immediately after receiving orders from her superiors, but the villain organization “Broken Identity (SAI)” had already announced layers of vigilance for her host. She needed to break through the block while uncovering the veil behind this supernatural event.

Compared with the previous work, “Infinity” has a big change in the setting of the background story and worldview. In the previous work, the time is set in 2020. The focus of the dispute between the two opponents is a sword that can awaken dead creatures. This metaphysical story has been rewritten in the new work, forming a delicate balance between metaphysics and science.

In addition, the game has carried out rich updates on the role action and combat system. In the game, the protagonist has two different weapon systems: a knife and a gun. Switching and using different weapons during battle will bring different combo experiences, which greatly increases the game’s playability.

Whether it’s a long-range machine gun that is consumed and then blocked with a bullet knife and executed, or using gravity to draw the skill to close the enemy and slash with a knife, a variety of skill combinations allow players to make different choices when facing different enemies. Any battle can bring a unique operating pleasure.

“Infinite” adds almost all the features of action games to the game: rebound, block, floating combo, etc. Different combos will also bring a variety of rewards such as stamina recovery, cancellation of reloading, etc. It also further expands the players’ strategies in different combinations of tricks.

Not only that, in terms of firearms, “Infinity” has been re-modified after listening to the opinions of the players in the previous game. It not only matched different firearms with incendiary bombs, grenades, tracking missiles and other firing modes, but also used firearms in different situations. Adjustments have been made, such as the need to use shotguns to break defenses when facing an enemy holding a shield, etc., which further enriches the game’s combos.

In terms of BOSS battles, “Infinite” also designed rich attack modes for BOSS. For example, the attack mode of the first BOSS “Tianyu Great” is rich and changeable. It can cast fireballs from a distance or slash with a long knife at close range. Players need to use different attack strategies to deal with, see tricks and dismantle tricks, soul combat combined with ultra-fast action experience will undoubtedly make the combat in this game more refreshing.

The super cool action experience naturally requires strong technical support to achieve the effect of “1+1>2”. Thanks to the integration of UE4 engine base and ray tracing technology, the game not only presents a shocking picture quality The effect of force, the screen jitter, blur and other details in the battle are also very elegant, giving players a strong immersive experience.

“Unlimited” is also on sale with related skin DLC items, which can beautify the firearms and melee weapons in the game, and of course also include the protagonist’s clothing and other items.

No matter how good the action is, it must have cultural heritage

In addition to the meticulous design of actions and battles, the exploration and refinement of “Infinity” on the elements of national style are also extremely important aspects. The fusion of Chinese style elements and the sense of future technology brings strong internal tension to the game.

In the game, players not only need to deal with the modern soldiers deployed by the hostile organization SAI, but also “traverse” into an ancient battlefield due to the influence of supernatural phenomena, and start a fierce battle across time and space with ancient soldiers wearing armor.

The game also incorporates elements of national style in the BOSS settings. For example, the first BOSS “Tianyu the Great” faced by the player is a “wujiao” wearing a three-eyed mask who appears to have come out of the Peking Opera stage. 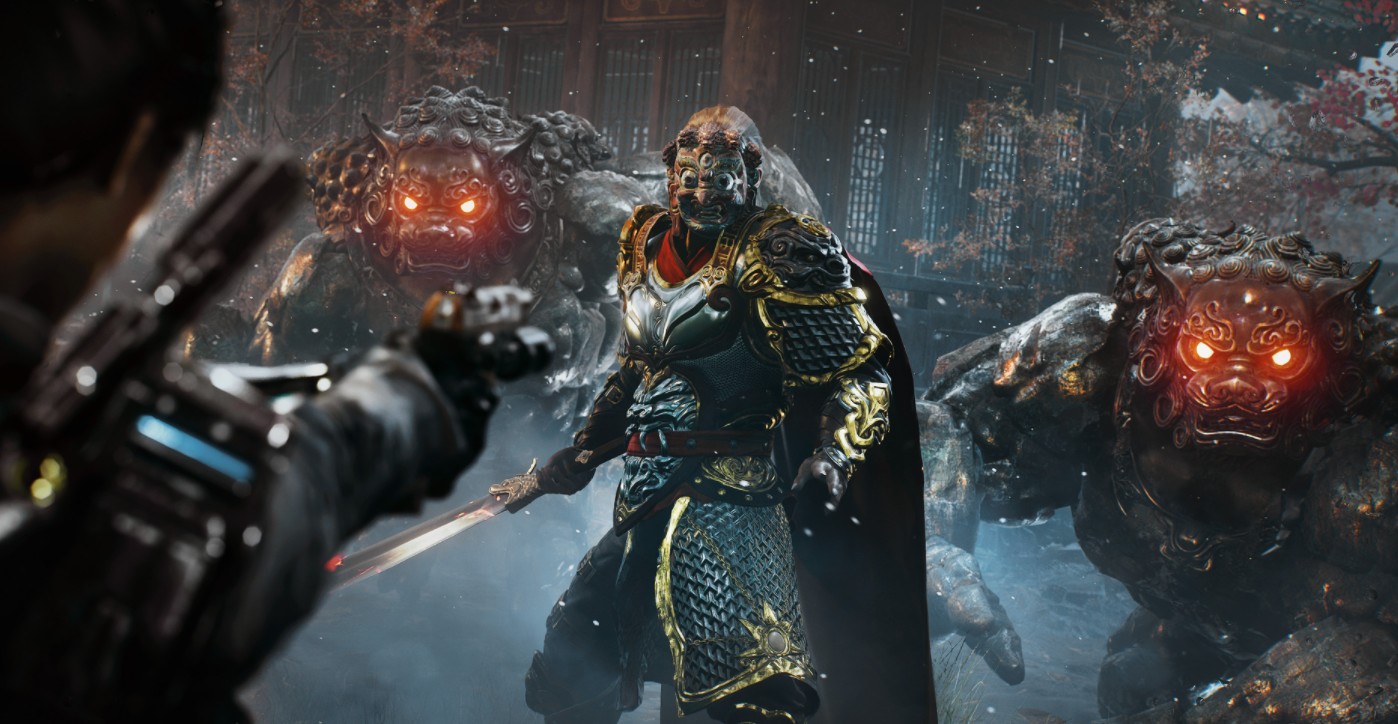 Another thing worth mentioning is the scene design in the game. “Infinity” refers to the structure and modeling characteristics of many Chinese buildings in the scene construction and level space design. These are all based on the producer’s accumulation in life, such as games. The wind and rain bridge scene in the middle is inspired by the Sanjiang Wind and Rain Bridge in Liuzhou, Guangxi. You can see familiar Chinese buildings in some BOSS battles. 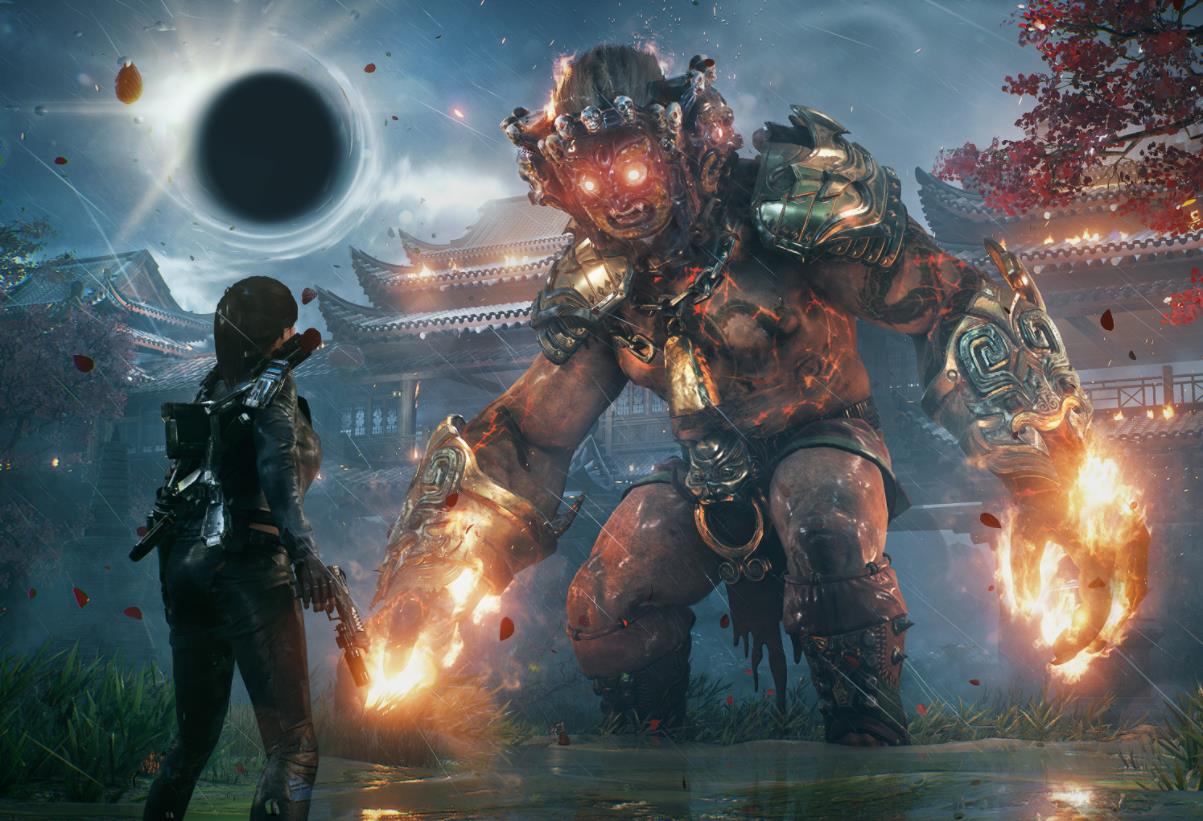 From the Feiyan Islands in Liuzhou, Guangxi, based on its hometown, it embodies the beauty of Chinese architecture in the game, whether it is the red tiled house that can be seen everywhere in the game, the ancient pagoda of the ancestral temple that can be destroyed, or the Rongshui Miao Village , Liuzhou Panlongshan Park all appear in the game. At the same time, the game also adds strong elements of national style in some details, such as red ribbons for wishing, Chinese drums, screens, temple bells and so on. 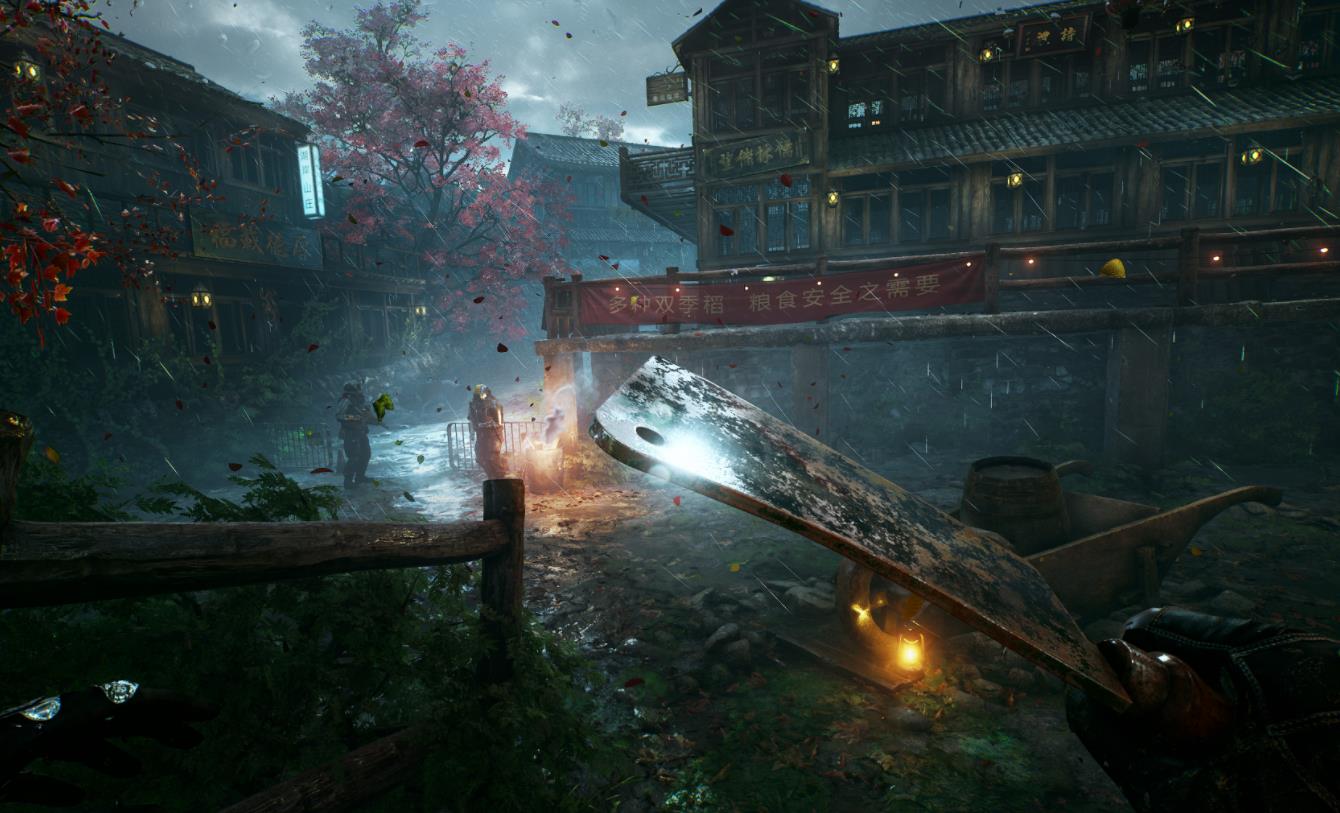 Feiyan Islands also specifically emphasized in an interview, “Some netizens said that it looks a bit like Japanese-style architecture, but I want to correct it with you. This kind of architecture is completely Chinese-style.”

Through the clusters of broken buildings and the darker game screens, “Infinity” vividly presents the depressed apocalyptic atmosphere, allowing players to better immerse themselves in the battle. The familiar Chinese architecture is in this context. It seems a bit strange, this kind of “distance” also puts a unique aesthetic label on the game.

The integration of national style elements brings a solid cultural heritage to this work, and the same is true for the game music. The music production of “Infinity” has a great background. It was co-created by Jeff Rona who participated in “God of War 3” and “Far Cry 4” and Cody Matthew Johnson who participated in “Devil May Cry 5” and “Resident Evil 2 Remake” , Jeff Rona also said in the interview: “This time we will integrate orchestral music with Chinese classical music, modern music elements, electronic music, etc. This is a rare opportunity to find a fusion between tradition and modernity.” 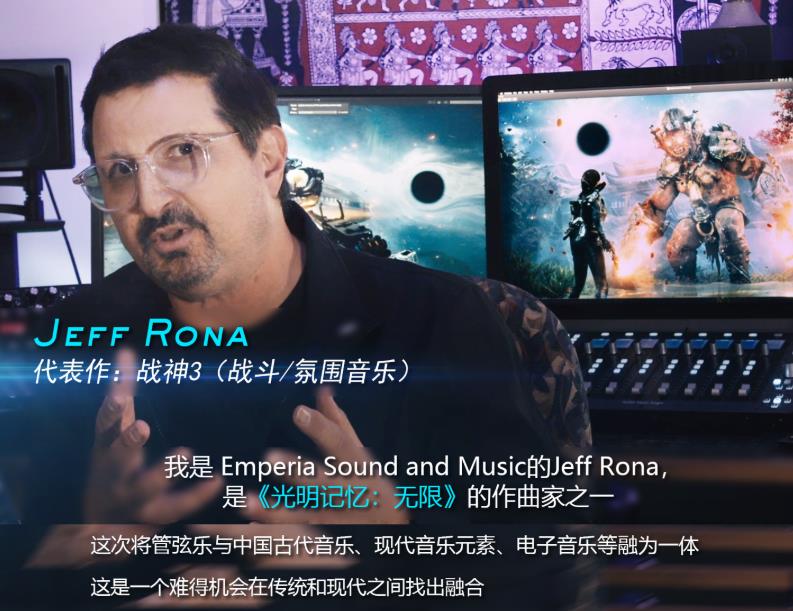 Excellent game level is the key to the success of “Infinite”, and the integration of national style elements at the audition level is undoubtedly the internal reason for its acclaim. The exquisiteness of culture also shows the ambition of “Infinite”.

Back to the essence, this is the answer of Feiyan Islands

The emergence of “Infinity” did not go smoothly, it also contained many bitter pasts.

In 2019, the popularity of the previous work “Bright Memory” on Steam made Feiyan Islands known to more people, but immediately the game was pointed out by many players about the plagiarism problem on the monster model. He also admitted this problem, but the copyright The disturbance and influence brought about did not make Feiyan Islands give up the idea of ​​continuing to make games.

The enthusiasm of the previous game allowed Xishanju, the company where Feiyan Islands was located, to see the future market for this game. When Feiyan Islands left the company, the senior management of Xishanju wanted to support him to form a studio to continue the development of “Bright Memory”. The development also allows players to rest assured of the subsequent state of this game.

The establishment of Feiyan Islands Studio has brought about significant changes in personnel. Feiyan Islands mentioned in the interview that the post-production work of the game is carried out by outsourcing, for example, in terms of characters, etc., and he himself is responsible for The setting of the framework. Among them, the creators also received support from Nvidia and animation company Reallusion, but most of the development is still carried out in their own homes.

The day before the game’s release, Feiyan Islands Studios published a short article on their homepage of station B to inform players of the main changes and features of the new work, as well as expressing their desire to rest.

At the end of the article, Feiyan Islands said: “The original intention of the development of “Bright Memory: Infinite” is actually very simple. One is to give back to the players who have been able to support the game, and the other is to maximize the development of oneself. In fact, the game “Bright Memory: Infinite” cannot represent the upper limit of the current development technology, because it is still a result of a limited time and low cost production, and there is still room for improvement in many aspects.” Perhaps this is the expectation that the creator left for the players.

At the time of writing, “Infinite” has reached the second place on the Steam Hot List, and its popularity is still growing. What we can see in this game is the “light of domestic products” and “domestic masterpiece”, and for Feiyan Islands, this may be more like a promise he made to the players.

The Super QQ Show returns with a new image, and the “QQ Upgrade Plan” is progressing smoothly