Supercell’s “Made in Shanghai” new tour “Royal Raiders” has been tested overseas and won the free list in many countries!

GameLook report/As everyone is building a “universe” today, Supercell’s “Clash Universe” is gradually full of wings.

In April of this year, Supercell released a video to announce three new games based on Clash IP, “Clash Quest”, “Clash Mini” and “Clash Heroes” in one go. This is to expand the Clash IP.

Now, nearly half a year later, these three products are also being advanced in an orderly manner. The first derivative work “Tribal Front” has started beta testing a week after the video was released.

Similar to the previous test strategy of “Tribal Front”, “The Royal Shock” was only released in some Nordic countries Finland, Iceland, Denmark, Norway, and Sweden. North America only launched the game in Canada, but it still attracted the attention of Supercell’s gold sign. Many players are early adopters. Up to now, the game has achieved iOS free and best-selling double list first in Finland, and it has also reached the top of the free list in several other countries.

Like many game companies that are carrying out large-IP ecological strategies, Supercell’s three derivative games choose to meet the needs of different players through the differentiation of gameplay. For example, “Tribal Battlefront” adopts the elimination + turn-based RPG gameplay, “Legend of the Tribe” is a horizontal action adventure game, and “Royal Raiders” adopts the auto chess gameplay.

However, this does not mean that the auto chess market has died down. For example, League of Legends “Game of Genting” and the derivative “TFT: Teamfight Tactics” and “Golden Shovel” have outstanding results, especially “Golden Shovel”. The popularity of “Battle of Shovel” verified the feasibility of the big DAU strategy, which also happened to be similar to Supercell’s previous “Wild Brawl” product strategy.

As a derivative product of Clash IP, the overall look and feel of “Shock of the Royal Family” maintains a high consistency with Clash IP. Both adopt a cartoon style. Many classic characters such as barbarians, giants, goblins, etc. are restored in in the game. Of course, on this basis, Supercell also stylized it.

﻿Official introductionFang Fan, the person in charge of game development, once introduced in the official official account: “We hope that more players can access them in the game. So we decided to make them appear in a brand-new way and become miniature soldiers in tabletop strategy games. “

Therefore, it can be clearly found that the character image in “The Royal Raiders” is more cute, more similar to the chess pieces in chess, and this is more in line with the tonality of the auto chess product “chess game”.

In addition to the distinctive character image, the most prominent aspect of “The Royal Family” is its core gameplay.

Unlike most of the auto chess products on the market, the board and automatic battle are only the expressions of the battle of “Shock of the Royal Family”. At the core gameplay level, it is quite a bit of “Royal War”. 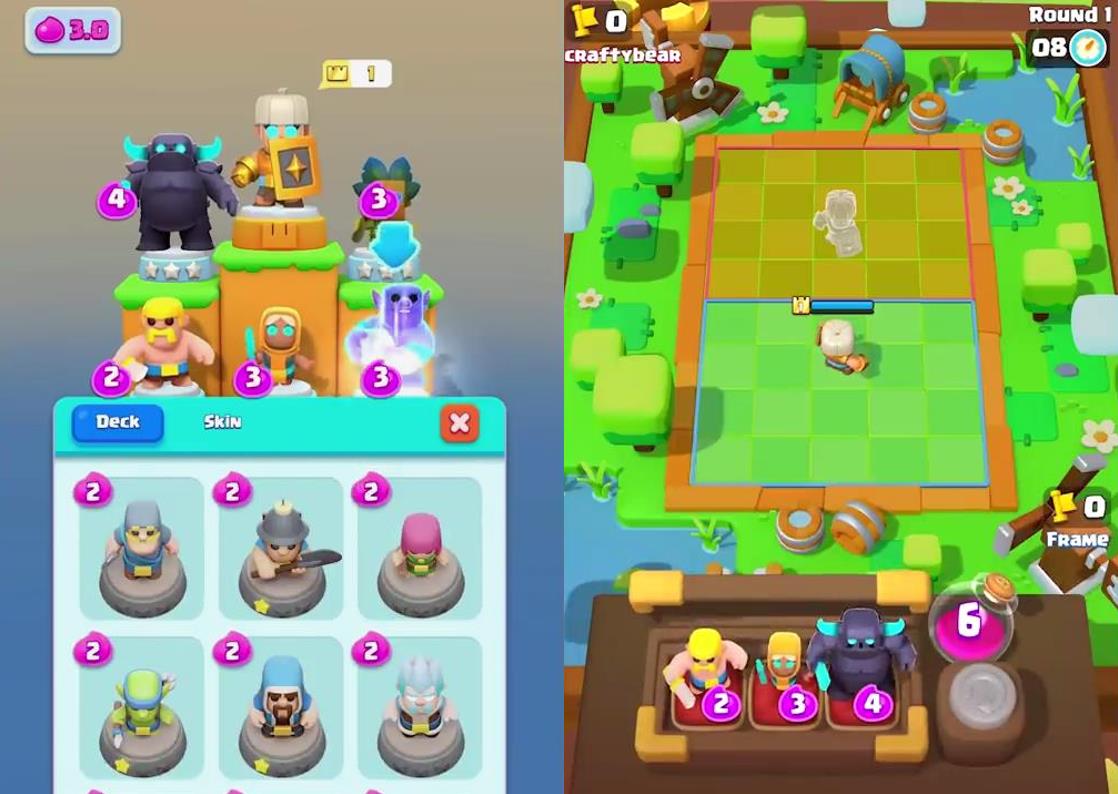 In other words, in addition to the positioning and selection of the characters in the game, “Roy Royal” also extends the strategic elements to the game, and the player’s lineup selection can also determine the direction of the game.

On this basis, “Royce of the Royal Family” also naturally joins the outside development system. Players can develop characters by collecting resources such as treasure chests. Of course, they can also collect a variety of cool skins.

At the same time, according to the matching mechanism of Supercell’s past games, players do not need to worry too much about the imbalance of the game due to development. This means that “Royce of the Royal Family” has opened up a new path to commercialization in addition to the decorative props of the auto chess category.

On the other hand, “Shock of the Royal Family” also innovated the traditional auto chess PVP gameplay. The game mainly set up two modes of 1V1 and 8-player battle.

The 1V1 mode is similar to the traditional auto chess game. Two players will play against each other. In each round, players can buy chess pieces, adjust lineups, etc. The player who wins the first three rounds will win.

In the 8-player melee mode, in the first three rounds, players will be divided into two groups for intra-group battles, and the two players with the highest number of wins in the two groups will be eligible to participate in the next “elimination match.” The 4 players who have successfully advanced will each have a 1V1 match, and then the two winning players will decide the final winner. 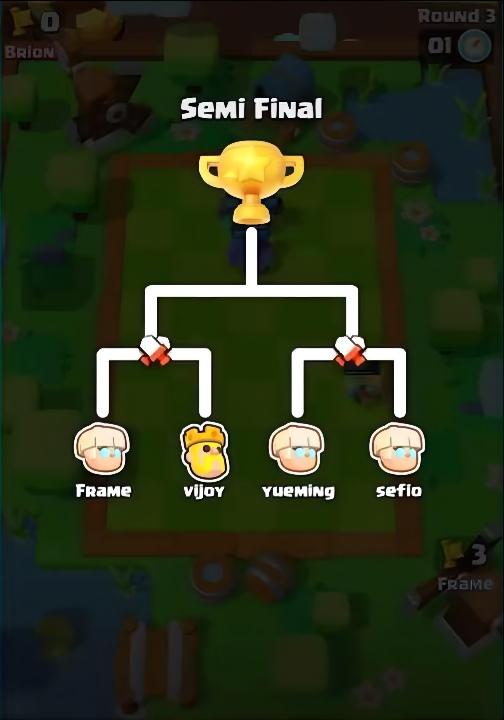 On the whole, the game experience of “Shock of the Royal Family” is very consistent with the usual characteristics of Supercell’s past products, light competition and fast-paced.

The game condenses the essence of auto chess into 5 rounds of battle. Whether it is 1V1 or 8-player battle, the battle can be solved quickly. The entire game time is only about 3 to 5 minutes.

At the same time, because the chess piece pool is constructed by players, compared with general auto chess products, players no longer need to understand or even remember the functions and effects of a large number of chess pieces, which simplifies the player’s threshold for getting started.

It is quite a coincidence that just before and after the B test of “Shock of the Royal Family”, “Tribal Front”, which was tested first, has recently ushered in a major update.

It is reported that this game has been beta tested in Finland and other Nordic countries as early as June this year. Although it is not particularly popular, it still attracts a large number of players to experience, and this is mainly due to the game’s innovation in gameplay.

If “The Royal Family” is an extension and expansion of the auto chess gameplay, then “Tribal Front” is a fuss about the elimination of the gameplay. Some of the gameplay and operation logic in the game are similar to the regular match-3 games, but Suercell On this basis, a lot of RPG elements have been injected to make the overall game experience unique.

First of all, as a derivative work of Clash IP, “Tribal Battlefront” is similar to “Shock of the Royal Family”. The art style is consistent with the overall style of IP. Classic characters are added and fine-tuned. 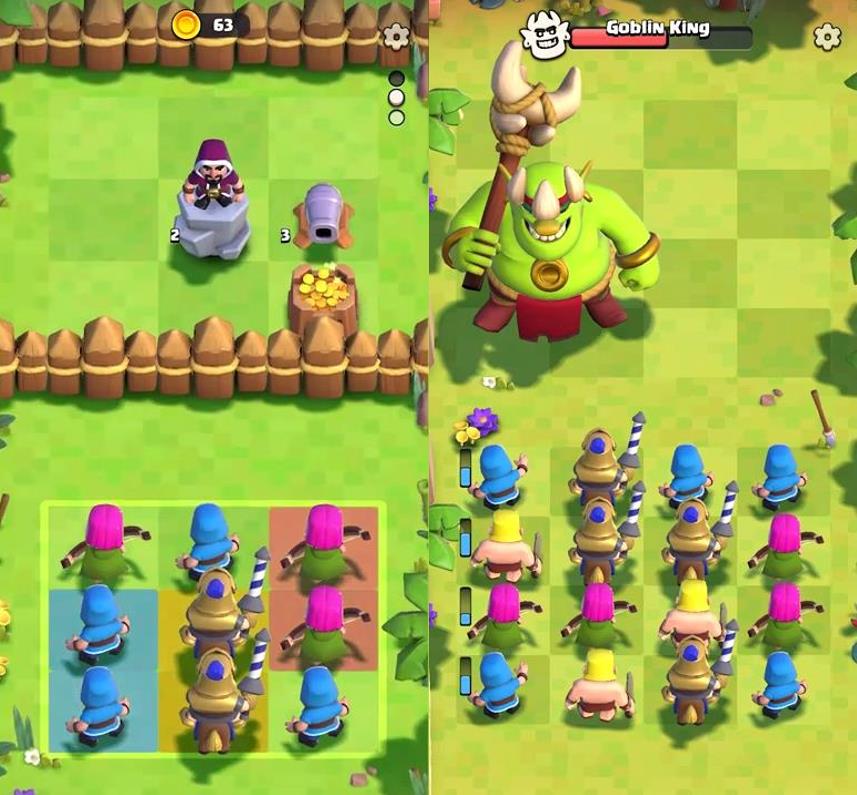 In terms of gameplay, “Tribal Front” has a unique combination of RPG and match-3 elements.

To put it simply, the overall gameplay of the game is a bit similar to a “fixed-point” tower defense game. There are 2~3 scenes in each level, and the battle is carried out in a turn-based manner. What the player has to do is to arrange different effects and features reasonably. Of the armed forces to attack.

If two or more units of adjacent colors are used at one time, the units of the same color can attack together and form a Combo, which can cause more damage to the enemy or obtain a greater gain effect.

In addition, Supercell limits the number of units in the game. If all units are exhausted and the BOSS or other local units are not defeated, it means losing the game. Therefore, players need to achieve Combo as much as possible to destroy the enemy.

In other words, match-3 is an important strategic element and rule in the game. Players need to consider the character’s position, attack sequence and other issues to maximize the output, and the final gameplay point of the game still falls on the RPG, defeating all the entourages. Can win. The rule of match three gives the game a strong strategic depth, and players need to think carefully about how to maximize profits at every step. 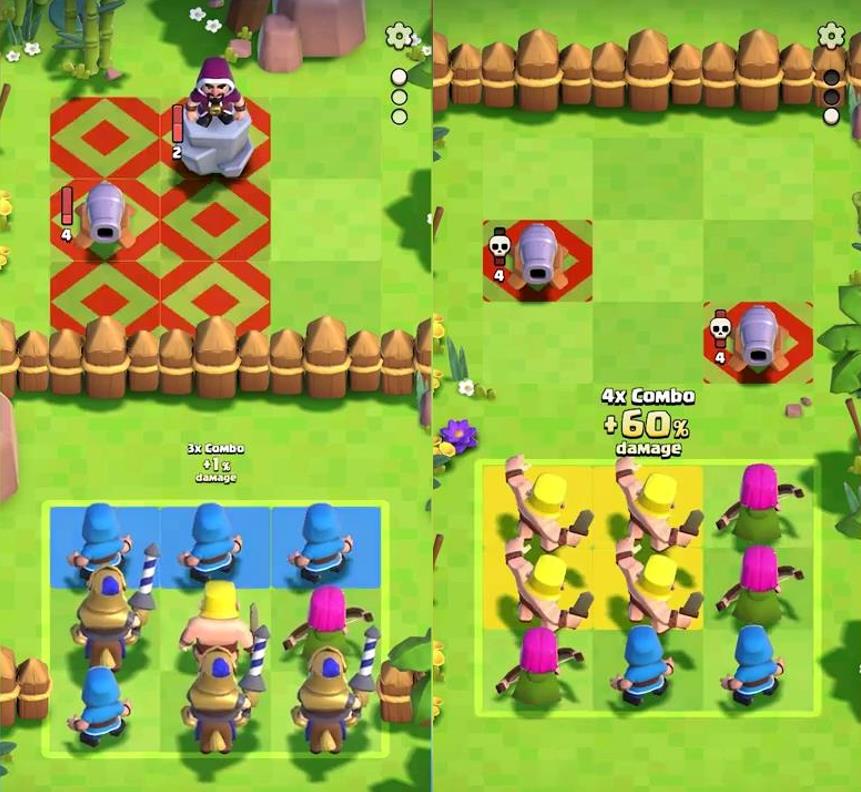 Of course, the too hardcore gameplay also caused some problems in “Tribal Battlefront”. During the game test, some players believed that the game was too biased towards the PvE experience, coupled with too much emphasis on puzzle solving and strategic depth, which caused the game not only to be extremely difficult. “Leisure” rhetoric, and the fun is greatly reduced.

In fact, Supercell has also noticed these problems and tried to solve them. For example, the latest iteration of the version updated the “tribe” gameplay. Players can form clans with friends before the league, which strengthens the content of the PvP level.

From “Clash of Clans” and “Royal Clash” to these three unique games today, when they were officially exposed, some players ridiculed Supercell for creating the “Clash Universe”.

As we all know, Supercell already has a wide user base, and the three derivative games with their own unique gameplay have also allowed Clash, the IP, to spread into different categories of vertical player groups to meet the preferences of different players.

Nowadays, with the steady advancement of business, these three products have not only allowed the industry to see the amazing creativity of “super cells”, the difference from the previous ones is that there is also a Chinese R&D force among them.

In 2018, Supercell officially established its Shanghai studio. With Tencent’s acquisition, Supercell has now become one of Tencent’s important overseas studios, and it will naturally expand further at the business level.

On the other hand, although Supercell is the world’s top mobile game developer, outside of the scale of revenue, the company does not have many employees, and even some game products such as “Wild Brawl” have a team size of less than 30 people. According to previous official data, as of 2020, the total number of Supercell employees is only around 340.

In the current market environment, such a scale of personnel may only be called a small and medium group, and three derivative products are announced in one go. Obviously Supercell is embarking on the expansion of the IP ecosystem, which means that more is needed. Talents are invested in R&D and content production.

In comparison, China’s development environment and technical conditions are much better than those in Finland. The supply of talents ensures that Supercell can continue to carry out content production and innovation, which obviously also satisfies the current expansion of Supercell’s game IP. Demand.

Supercell Shanghai Studio has also stated that the goal of its establishment is to “utilize Supercell’s unique corporate cultural advantages, gather talented developers and teams from China and even the world, and release creative potential.”

Of course, it needs to be pointed out that according to Supercell, both “Tribal Battlefront” and “Shock Royal” are currently in Beta testing stage. These two games have not yet entered the two major markets of China and the United States, and the third derivative game “Tribal Legends” 》The app store has not yet been launched.

The future performance of these three products is geometric and it is worth looking forward to.

Force of the Soul is shown in the second trailer