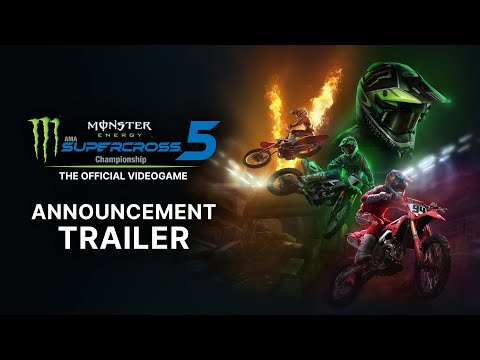 End Milestone and Feld Entertainment Monster Energy Supercross The Official Video Game 5 for PS4, PS5, Xbox One and Xbox Series X. There is also a nice trailer to watch. The upgrade from PS4 to PS5 is free and Smart Delivery is offered on Xbox consoles.

More information can be found in the press release:

The revamped career mode is more impressive and realistic than ever! The starting point of the Supercross career is the 250SXFutures Class, in which the talents can apply for higher things. Monster Energy Supercross The Official Video Game 5 also introduces the ridershape system in career mode, which, as the name suggests, affects the performance of riders after falls and injuries. Recovery can be positively influenced by training and special tasks. From now on it must be ensured that the driver is always in top form.

Monster Energy Supercross The Official Video Game 5 offers an impressive twostroke engine experience even for beginners. The future academy makes the title more accessible. This feature hides an easytouse tutorial to help players take their first steps into the world of Supercross. There you will learn the basics that are undoubtedly necessary to climb the career ladder from beginner to professional. In addition, several ingame options make the sports title much more accessible, for example flow recovery, control tools and many other technical aspects. The goal is clear: a unique and tailormade gaming experience must be created for every fan.

No Supercross game without the track editor: the newest part also offers the classic experience with new features: the rhythm section editor allows the modification of existing modules to design complex premade track sections, which of course can also be shared with the community .

After the overwhelming success of last year, the track editor competition is also celebrating its comeback. Once again, players can design a virtual track that will then become part of the official championship in 2022. Pros from the official Monster Energy AMA Supercross Championship championship are already looking forward to the new track! This unique partnership is second to none undoubtedly a onceinalifetime opportunity for the entire video game industry.

On the compound, cool races and challenges with friends are again in the foreground. In this breathtaking open game world you will find different routes, crosschallenges and collectibles, which in turn unlock additional content.

Online multiplayer allows players from one console family to meet for the first time for matches across the platform generation. Split screen mode also allows friends to throw themselves into the match on the couch!

After last year’s incredible success, eSport is making a comeback Monster Energy Supercross The Official Video Game 5 yield! Skills are put to the test in the Yamaha sponsored eSX Championship who will become a legend?

Monster Energy Supercross The Official Video Game 5 will be released on March 17 for PS4, PS5, Xbox One, and Xbox Series X.