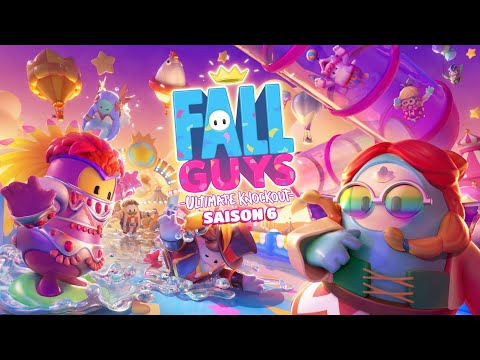 Mediatonic announces that the sixth season of Fall Guys: Ultimate Knockout starts on November 30 and has the motto “The spectacular party”. We also get to see a movieready trailer for it.

In the sixth season of Fall Guys: Ultimate Knockout Dive and race the beans on PC and PlayStation through new rounds laced with a wide variety of new obstacles to test the players’ stumbling skills. The season includes:

Once the new season is live, an Epic Games account will be required to fall guys to play, bringing new features to the game: crossplatform game progress between PS4 and Steam and the return of userchosen usernames.

party promenade
The party kicks off with the wildest gauntlet yet, packed with new obstacles. In this festival of awkwardness, the beans navigate racing vacuum tubes, dodging water balloon cannons and swinging themselves to victory on the acrobatic trapeze poles.

Completely freaked out
A fiendish new edition of the Fall Guys classic featuring new, dizzying 360° seesaws in a treacherous race to the goal. The beans have to watch out for force fields and fast spinning rods that want to throw off the track.

pipe dream
A tubular race to the finish. Each journey to the Pipe Dream brings a new challenge, as each vacuum tube can become a tripping hazard. Includes pinball machines and fans, dangerous turntables and a few other obstacles.

airtime
Here you have to prove your skills to stay in the air for as long as possible. Swinging on trapezoids, as well as conveyor belts and rotating platforms helps. Otherwise, drums and pinball machines are waiting for the fallen beans to rise again.

guiding light
Who doesn’t want to be in the spotlight on the biggest game show in the universe? But that’s not so easy when you come across turntables and fans. To become the center of attention, the beans must use force fields to differentiate themselves from the competition.

The Season 6 Prestige Path includes new rewards to equip the beans for the spectacular feast. In the 50 reward levels, more than 20,000 kudos, more than 20 crowns, colorful costumes and much more can be unlocked.

As part of the new season, more than 25 new carnival costumes have also been added to make walking around even more stylish.

The Blunderdome Construction Crew has prepared a slew of new limitedtime events to reward the most loyal beans. Based on player feedback, a number of fixes and improvements have also been made to make tripping easier.

• More limited time events more rewards, more challenges, more wild show variations starting with Sackboy.
• Roll Off is back The finals are back with several fixes.
• Wonderful Pinball Fixed an issue when multiple beans use the same pinball in rounds such as Tundra Run and Short Circuit.
• Spectator mode in a group Spectator mode now goes automatically to the group members.

Fall Guys: Ultimate Knockout will be available for PS4 since August 4, 2020. Xbox One, Xbox Series X and Switch will follow soon.