Lexi Sydow, head of App Annie Insights, said that from the perspective of download numbers, ultra-casual games still set a record high, which means that although such games have simple gameplay and low long-term retention, ultra-casual games will still not disappear in the short term.

App Annie also said that from the growth in the first three quarters, the scale of mobile game consumption in 2021 is expected to exceed US$120 billion, an increase of 20% from the US$100 billion in 2020.

Sydow said, “We will still see consumers spending more than US$120 billion in mobile games. This figure includes iOS and Google Play, as well as third-party Android stores in the Chinese market. This year’s mobile game revenue growth is very strong.”

In addition to the overall market forecast, App Annie also released the 2021Q3 global mobile game list data. The following is the report content compiled by GameLook (the screenshots of the list in the article are from App Annie):

In terms of downloading list, “Glory of the King” and “Peace Elite” maintained the top and second place on the list. Tencent’s new work “Battle of the Golden Shovel” successfully won the third place in the Q3 download list, and the other two new games entered the list. They are “Magic Awakening” and “Soul Master Showdown”. From a global perspective, even though the data from third-party Android stores in China is not included, Mihayou’s “Yuan Shen” still ranks second in terms of global revenue. The release of the new version makes this game appear more global. Substantial income growth. The other two games with a higher increase in the bestseller list are “Pokemon Go” and “FGO”. 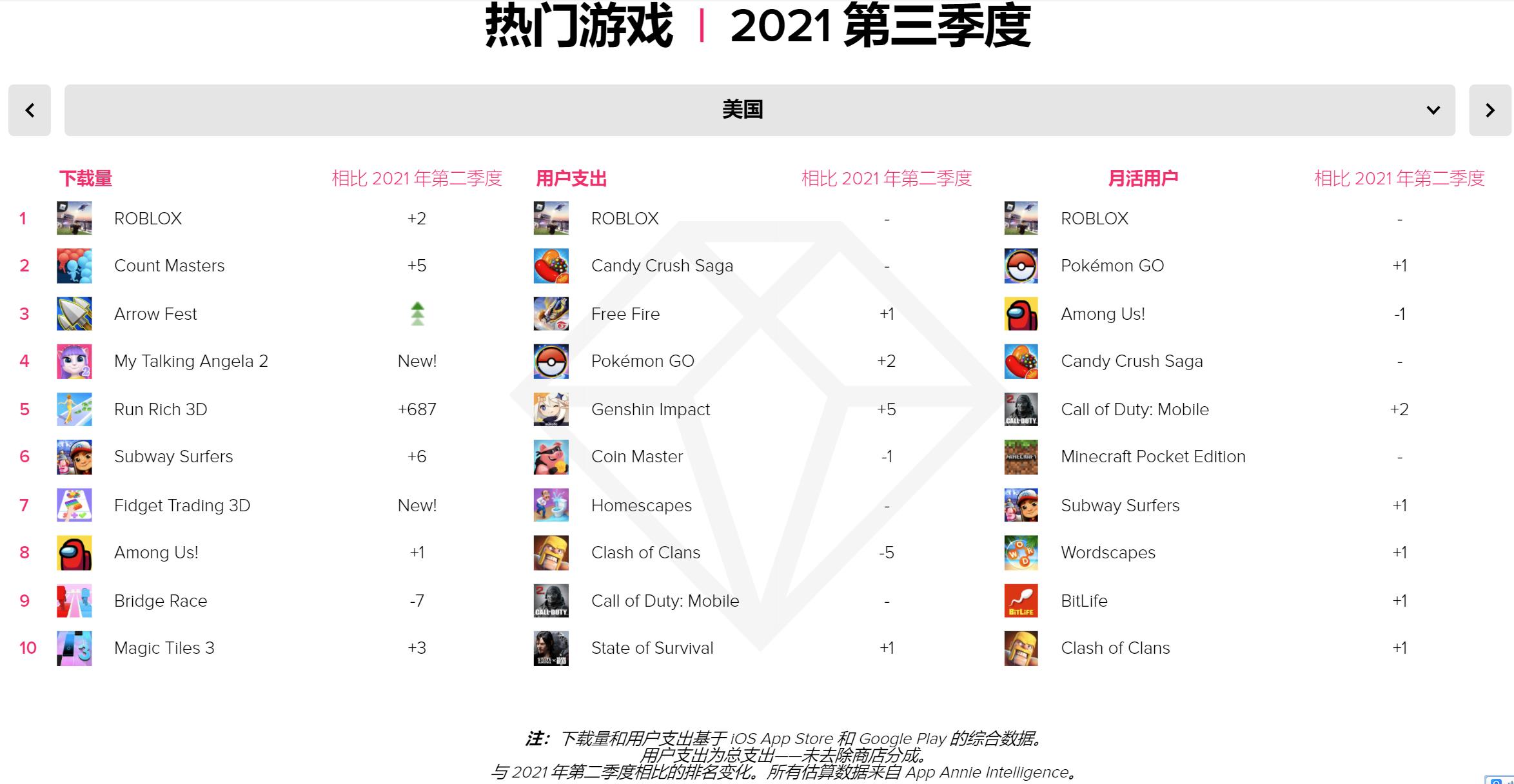 It is worth noting that on the best-selling list in the United States, in addition to “Original God”, which has been relatively strong after Mihayou’s release, FunPlus’s “State of Survival” has also successfully entered the top ten in Q3 US revenue. 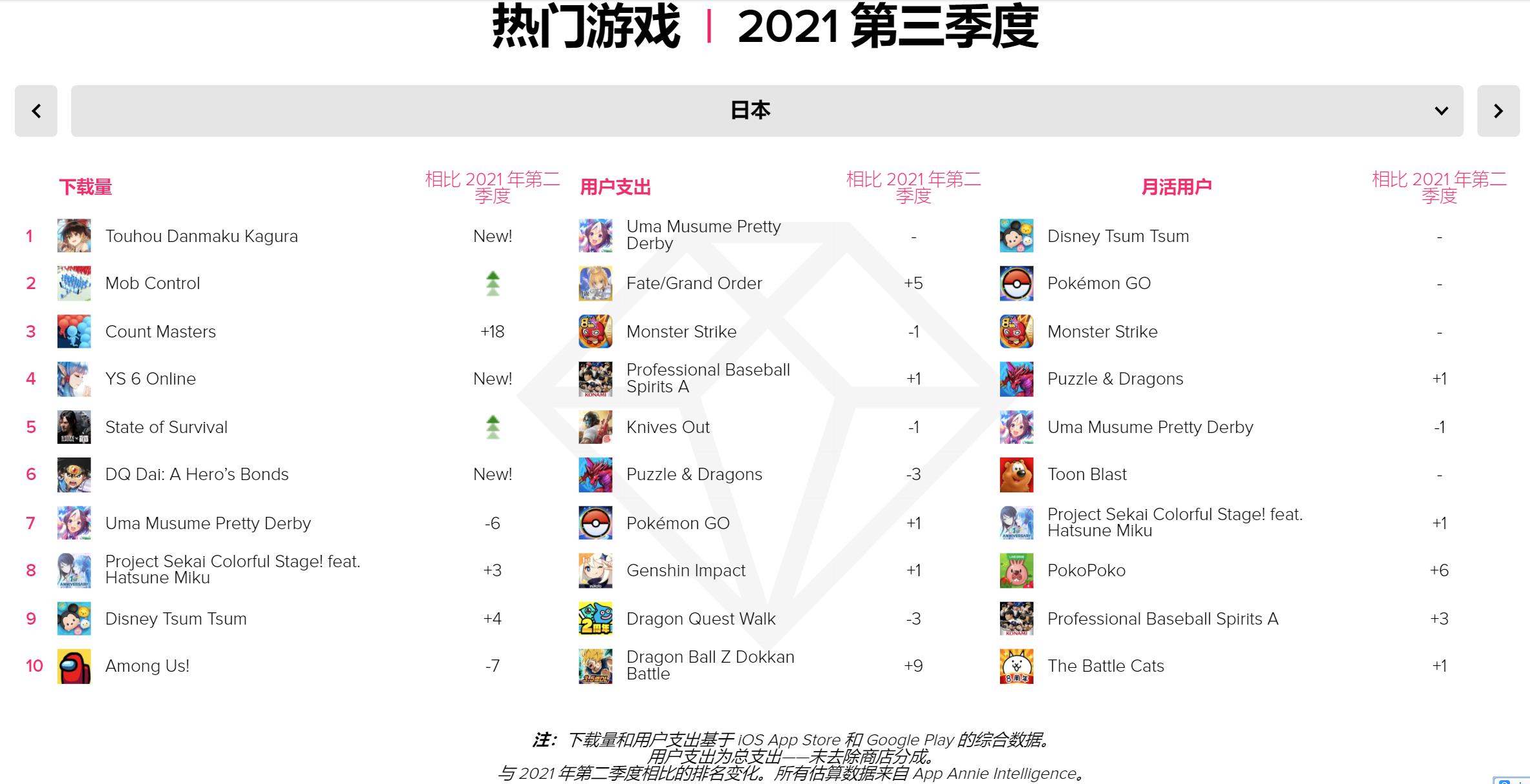 IDFA thunder is heavy and rain is little?

It is worth noting that the substantial growth in 2020 is due to the impact of the global epidemic, and Apple has launched iOS 14.5 for targeted advertising for user privacy. In this case, it is particularly difficult for the mobile game market to see a 20% increase. Sydow said, “Finally, from the data we collected, the new IDFA policy did not have a particularly large impact. People are still using and playing games at a higher frequency, especially the increase in user consumption on the App Store platform. Did not slow down.”

Sydow said that Apple’s change in IDFA policy has raised concerns about the impact of mobile game revenues, especially the European and American mobile game marketing platforms are almost overwhelming. Monetization platform Fyber reported that only 15% of users are willing to share their data with advertisers, which makes it more difficult to locate users and greatly reduces the efficiency of buying.

But Sydow said that the changes in IDFA did not bring a clear fatal blow to the revenue of the entire mobile game market. This view is diametrically opposed to the statement of Consumer Acquisition CEO Brian Bowman, who believes that the third-quarter performance of mobile game companies in the public domain shows that the impact of Apple’s new policy is far greater than previously expected. Bowman predicts that mobile app advertisers will lose 15%-35% of iOS revenue. The frequency of advertisements will increase and the number of ad impressions will increase. However, due to the reduced efficiency of user targeting and measurement measures, the quality of ad impressions has declined.

On the contrary, Sydow believes that IDFA policy changes are not a global phenomenon, at least it has no impact on the Android market, and the iOS platform is only affected by the lack of user positioning for specific game categories. The most obvious impact is social chess and strategy. game.

Mobile game downloads peaked in the second quarter of 2020, mainly because social isolation measures were implemented globally at that time, which prevented more people from going out, so more time was devoted to social mobile games. But Sydow said that throughout 2021, the mobile game utilization rate and consumption scale of global consumption will remain at a relatively high level.

In the Chinese market, due to regulatory factors, the speed of approval of mobile game version numbers has slowed down. In order to reveal the health of minors, a three-hour game time limit for young people per week has also been introduced. Game companies are now just beginning to implement it. , Sydow expects that the impact of this policy will be confirmed in future mobile game data.

“The Chinese market actually interacts with the global market. With the rapid growth of the global market, we are seeing more and more game regulatory measures take effect globally, which has led to the increase in mobile game revenue in the Chinese market. Slow down, but the result we finally see is that the strong growth of overseas markets has brought great compensation.”

In addition to user consumption, the growth of mobile advertising revenue has also helped the overall growth of the game industry.

She said, “I think COVID has made mobile games accepted by the mainstream and has accelerated the process. This year there are some real driving forces. We let us see that people are playing more games. It means that people may start from super Casual games, puzzle games, or match-3 games “into the pit”, and then began to invest more time playing games, or try other types of games.”

In the report, App Annie stated that parkour action games (such as Sybo’s “Metro Parkour”) are the most downloaded sub-category under the action game category. In terms of user consumption, 4X conquer battle strategies (including SLG’s Inside) is the sub-category with the highest proportion, with global user consumption in the first three quarters reaching US$2.4 billion.

Sydow said that the key to creating a successful mobile game is to focus on monetization, participation and player retention. Monetization is highly related to functions such as customized in-app purchase promotional gift packages and piggy banks. Similar to the task system and timed online rewards will increase participation, while the collection mechanism and content preview are the key functions to maintain a high player retention rate. .

Ultra-casual games continue to be strong: Ultra-casual games (driven by action, puzzle solving and simulation categories) accounted for about 33% of the downloads of mobile games in 2021Q3, reaching 3.6 billion times, almost twice the number of the same period two years ago. “Count Masters” is the most downloaded ultra-casual game of the season.

Sydow said, “Ultra-casual games seem to dominate the mobile game download list every quarter. We also found that some non-ultra-casual games stand out, such as “PUBG MOBILE” and “Roblox”, and “My Angela.” It’s attractive. Maybe people started out with hyper-casual games. After getting familiar with them, they started to play more games.” 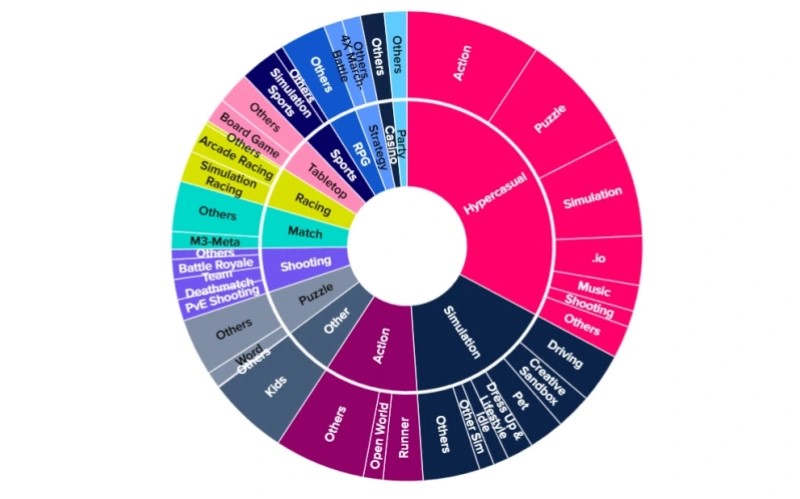 The parkour animation category is still the category with the highest download volume, among which “Metro Parkour” is the long-term winner. In the United Kingdom and the United States, users in this category have a high degree of overlap with users in the action ultra-casual game category.

The 4X Conquest Fighting Strategy is the world’s highest mobile game segment in terms of revenue. In 2021, global consumption exceeded US$2.4 billion, accounting for 10% of the entire mobile game market in the same period. In terms of global revenue, Lilith Games’ “Awakening of Nations” is the highest category, while “Evony” ranks first in the world in terms of downloads and active users.

However, the classification here may be slightly confusing. For example, App Annie has also included part of MOBA mobile games in this category. The revenue of Riot Games’ “League of Legends Mobile Games” reached 150 million US dollars, and the higher income of “Glory of the King” But it is not in this list.

Mixed match-3 gameplay is the fifth-ranked mobile game segment by revenue. During Q3 of 2021, this category surpassed traditional match-3 mobile games in terms of downloads and revenue.

In this category, Playrix took advantage of the three games “Dream Home”, “Dream Garden” and “Dream Aquarium” to occupy the top three positions in the revenue list. In terms of revenue growth, “Royal Match” ranked first.

The Slots sub-category is a key driver of the growth of board and card games. During the 2021Q3 period, the revenue of this category reached 1.4 billion US dollars, accounting for 6.1% of the total mobile game consumption. “Slotomania” is the best performing product in this category. The rankings have won the championship.

Generation Z players in the United States are 1.66 times more likely to experience parkour games than average users, while generation X and baby boomers have 1.43 times the probability of Slots (chess and cards) games compared to average players.

From the data point of view, game companies have become smarter in terms of the relationship between game success and purchases. For example, in France, South Korea, the United Kingdom, and the United States, there are the most overlapping users between puzzle games and match-3 games. 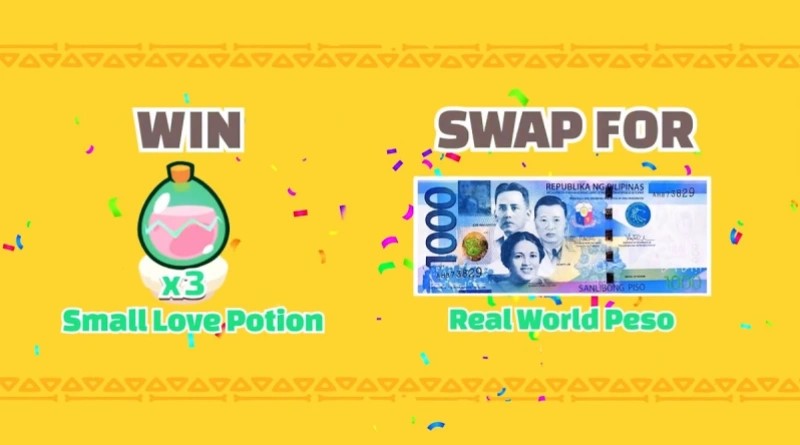 Regarding the popularity of NFT games, the developer of “Axie Infinity” said that the game’s DAU exceeded 2 million, and the sales and distribution revenues brought by Axie characters exceeded US$2 billion. App Annie said that the company is currently very interested in NFT games. Concerned, but has not yet begun to measure the data in this area.

Sydow believes that the app store will still be the most important distribution method for mobile games.