In the day and evening light years, we will focus on the domestic two-dimensional market, and the new tour “Resonas” is first exposed, saving the world by train?

GameLook report/Eight years ago, the movie “Snow Country Train” directed by South Korean director Bong Joon-ho was released worldwide, breaking the record for the highest single box office in South Korea at that time. Different from the great fantasy of space opera, the film freezes the future after the sudden climate change, and humans are forced to attach themselves to a train that runs forever along the rails.

Coincidentally, a new two-dimensional tour recently exposed PV for the first time. It also happened after the supernatural disaster, and the train has once again become the key to the human world. That is, the player will take the train to shuttle through this cataclysmic land to deliver supplies to different regions. In just two days, the video has been played more than 800,000 at station B.

This is the new game “Resonas” developed by Critical Studio, currently TapTap 8.9 points and B station 9.0. Taking a closer look, Tianyancha information shows that the game trademark and copyright belong to Hangzhou Yuzun Software Co., Ltd., the Principality of the Game. Its products include the two-dimensional mecha game “Mobile Team Battle”, which has also been exported to the Japanese market. , With experience in the development of two-dimensional games. The domain name of the official website of “Resonas” indicates that the website belongs to Zhaoxi Guangnian. 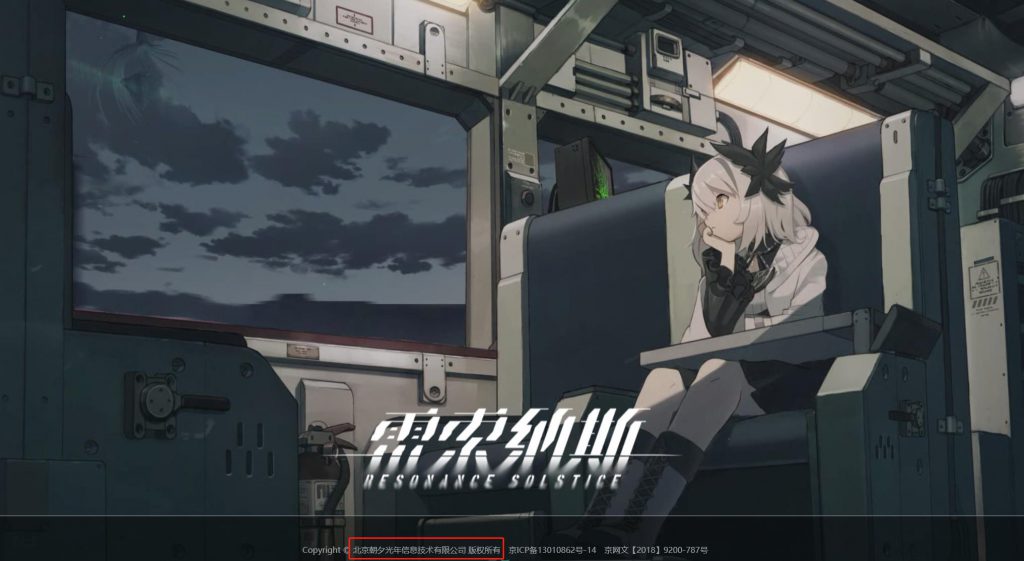 At the same time, with the exposure of the game’s PV, “Resonas” also opened the first test recruitment for the first time, and it still ranks first on the TapTap appointment list.

After the supernatural disaster, get on the train and play cards to save the world

As the official said, the game is inspired by Sheldrake’s “morphological resonance theory.” The source of the supernatural catastrophe that changes all common sense and order in the background of the story is a phenomenon of “form resonance”. That is, the vibration of the “tree” causes the human consciousness to fall asleep, and the body undergoes abnormal changes.

Because of this, “Resonance” is also the source of the quite mouth-watering game title “Resonas”.

In the disordered world under the supernatural catastrophe, the player will act as the “train conductor” of the Columba Chamber of Commerce, traveling with crew partners to deliver supplies and explore the unknown world of tomorrow… But compared to the brief information given in the official text description , The game’s first PV is obviously more attractive to players. 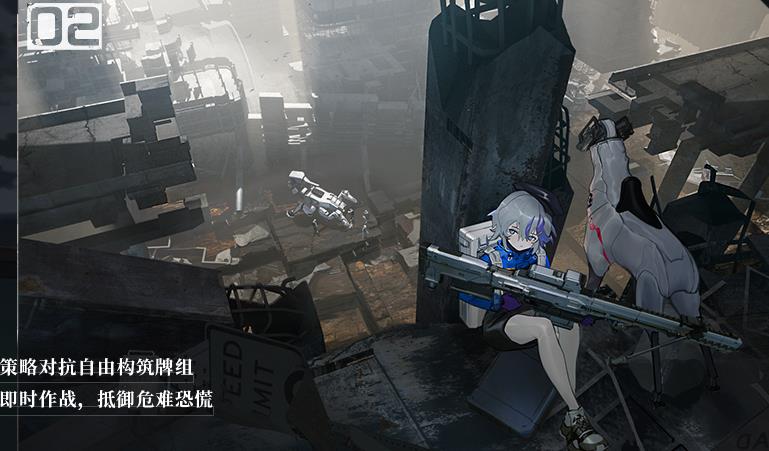 Looking at the different styles of PV, the whole picture is dark and gloomy, which is quite a bit of a disorder in the world after the catastrophe. Among them, the train is running in a decadent city, and messy intelligence such as “Corumba Chamber of Commerce, Reality Stabilization Device, Aurora Aurora” appears one by one, creating a strong sense of suspense.

Coupled with the conspicuous red and white text messages in the PV that are alternately arranged and flashed, a strong EVA stream of consciousness is both visual and the second element flavor is instantly full. The “birch tree creatures” that appeared during the period obviously refer to the mutant creatures affected by the “trees”, and indeed there are towering inverted triangle-shaped “trees” at the end of the film.

It is worth mentioning that the tree is an important element in Norse mythology, and this image is very mythical. According to legend, this huge world tree constituted the entire world and derived nine kingdoms. It has been used many times for reference by many classic games, such as the Black Soul series, “Eldon’s Circle” and so on.

Also noteworthy in PV is the term “Jungian consciousness”. As we all know, Jung’s three-layer theory of consciousness includes consciousness, individual subconsciousness, and collective subconsciousness. According to the player’s speculation, combined with the pupil images appearing at the beginning and end of the PV, it shows that this world may also be a subconscious world constructed by someone or an organization.

In addition, the multiple appearances of the aurora and the pop-up words “Earth Guard 2, Origin” and “Post-Disaster Reconstruction Community” may also indicate that the cataclysm was caused by the “resonance” caused by Earth Guard 2 entering orbit. The description of the official website is also close to this speculation: “Earth Guards II” is coming, even if humans have the knowledge of “learning” and the resources integrated by “Earth Union”, they are still helpless about the upcoming “criticality” and watch the world. Gradually fall apart. 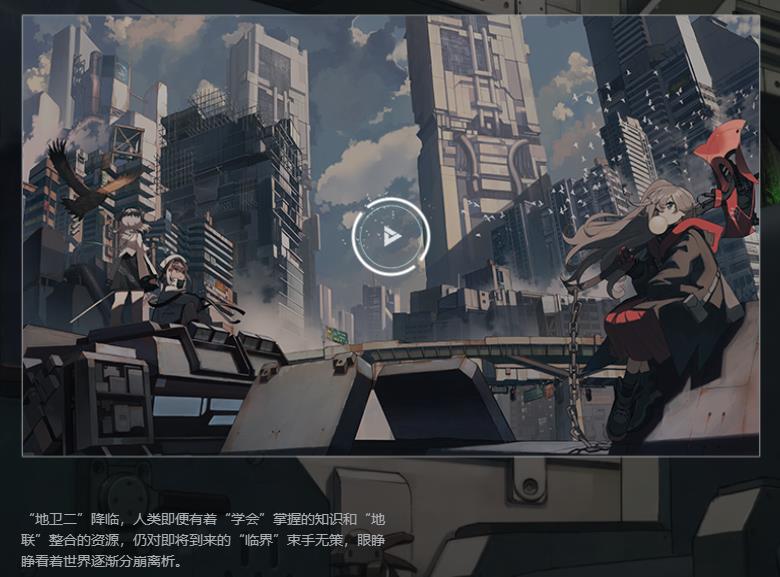 Unfortunately, the specific gameplay is not exposed in the PV, but from the official description, “Resonas” should be a combination of CCG cards and real-time combat. That is to say, you can freely construct a deck before the battle, and play cards based on strategy during the battle, and instantly adjust the Q version of the crew to change the direction of the battle. Many two-dimensional painters have joined, and the art is the first to win at the starting line

To be honest, compared to the pitiful worldview and gameplay at present, the deepest impact of PV on players is the high-quality game art.

Just the scenes flashed in the PV, such as the “Wandering Earth”-style ice and snow wasteland, the decadent city under the aurora, the Nordic-style landscape, the dim steampunk city, the interstellar ship, etc., are magnificent without losing the details. Enough to surprise players.

In contrast, the person setting of the game has more characteristics. Based on the relatively deep world view of the game, the entire PV screen gives the player a dark and dilapidated atmosphere, but the characters adopt a cute style of painting, which is very recognizable. While this kind of conflict in settings brings about a contrast, it is inevitable that people will doubt that it will also be a game of “love and hope”.

What’s more interesting is that with the release of PV, the game immediately “exploded” a number of well-known two-dimensional painters on Weibo.

To bear the brunt, “Incombustibles” first reposted the PV on Weibo saying that “the project was made public”. This well-known artist who has participated in projects such as Azur Lane, Girls Frontline, and Tomorrow’s Ark is also the main beauty of the game. Subsequently, a stone caused a thousand waves of waves, which attracted many painters familiar with the “old two-dimensional element” to take over and forward them, and one after another revealed that “I also participated in some”. 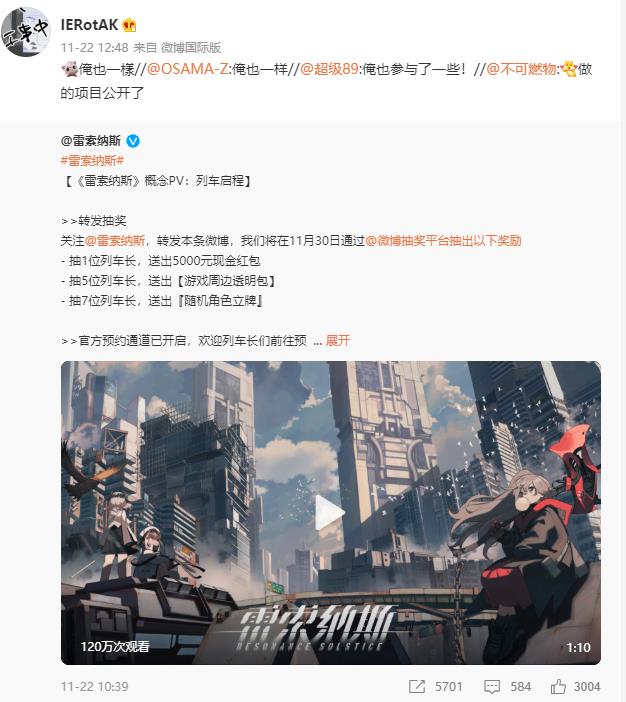 In GameLook’s impression, the last two-dimensional game that “rolled up” at the art level was “White Night Aurora”. In the latter, not only the game producer, Touring Dog, was born in the original painting, but also more than 150 well-known painters such as the Shadow Master and Ryota-H participated in the production. From this point of view, it is hard not to look forward to the performance after “Resonas”.

Obviously, there are not a few players who share the same views with GameLook. Many people said, “The appearance of the vertical painting has hit me”, “The style of painting is super appetizing to me, and the world is also good to watch. Five stars are looking forward to it.” 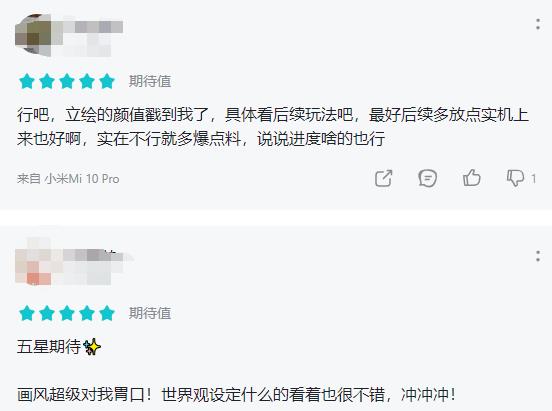 Some players bluntly said that they were attracted by the setting of Jung’s consciousness and looked forward to the future worldview and plot construction. At the same time, it was also mentioned that in addition to the style of painting and the setting of the story, they look forward to specific gameplay, after all, strategic cards are the focus. In addition, some players expressed more pertinent suggestions: “Excellent art graphics are just a basis. What is actually lacking is the game experience, gameplay or operation that satisfies the players. It is best to come up with amazing gameplay. .”

And some female players who were attracted by the style of painting once again emphasized the importance of the sense of substitution in the plot. “I don’t have high requirements for gameplay. The plot line is really troublesome and write it well. In addition, the character settings must be full, and don’t have nothing to do with good looks.”

From GameLook’s point of view, it is not surprising that the agency will act as an agent of new works in the second dimension at this time. After all, since the second half of the year, the volume of domestic two-dimensional games is indeed not small. 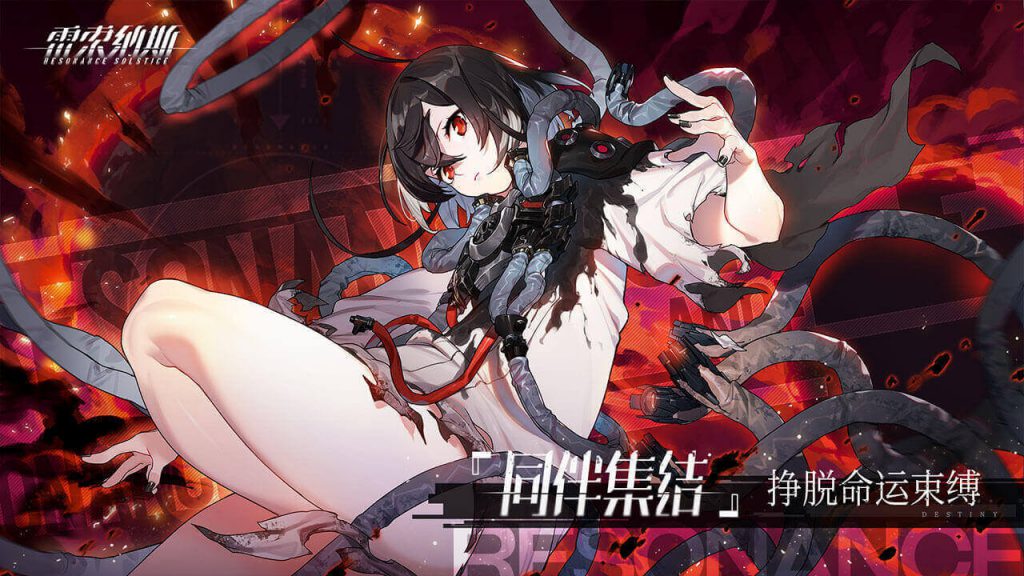 On the other hand, in the light years of the day and evening, this year has announced a number of self-developed new works such as “Hua Yishan Heart Moon”, Doomsday Science Fiction “Code: Advent”, MMOACT “Crystal Core”, covering multiple mainstream tracks, only the most popular ones. The domestic two-dimensional market has been silent for a long time. However, judging from the previous signboard direction of the evening light year, its mysterious two-dimensional self-research project has been steadily advancing.

Compared with the domestic market, in fact, as early as last year, Chaoxi Guangnian released the two-dimensional ARPG game “Eden’s Gate” overseas; in June of this year, it also represented the “High Expert Team” in the Japanese market and once ranked among the Japanese iOS free lists. second.

At the same time, the “Idle Girl” launched by its subsidiary You Ai Huyu has been steadily on the top 20 best-selling list in Japan all the year round; and Mutong’s two-dimensional idle card game “Aksha Wars ~ Dawn Apocalypse” has achieved good results in the Japanese and Korean markets. At one time, it entered South Korea’s iOS best-selling list No. 3 and Google Play best-selling list No. 15.

From the current point of view, “Resonas” will obviously become a key step to enter the domestic two-dimensional circuit in the next light years. In the light years that have always attracted the attention of the industry, whether the success of “One Piece: The Passion of Blood” can be reproduced with the help of “Resonas” and completed its first show on the core two-dimensional circuit is still worthy of the outside world.