GameLook report/”I have a pot of wine, enough to comfort the wind and dust.” Throughout the ages, every Chinese has a dream of martial arts who longs to wander on the avenue of rivers and lakes. It can be described as different from the heroism and Bushido of the American and Yamato nations. From novels to games, Yingjie has never stopped pursuing and exploring martial arts culture.

With the continuous iteration of the traditional “Three Swords”, players’ expectations of the martial arts world have become more stringent. Even so, martial arts and rivers and lakes are the cores on the market, such as “Taiwu Picture Scroll” and “Ghost Valley Bahuang”. ”And other games are still emerging. Jiashanlin’s “The Destiny of Heaven” is one of the members of this vast army. It may not be well-known, but when it comes to fun, it definitely ranks among the best, and its excellent content and gameplay have gained countless fan.

On November 22nd, the highly anticipated “Destiny’s Destiny II” continued its previous work, and returned to the world with a 90% favorable rating on Steam! This time the player will play the role of the “wise man” Zhuge Yu and embark on a road to fight against evil forces and seek justice for their parents.

According to the author’s investigation, I found a rather interesting thing. This is an open world, 3D, martial arts developed and published by the Taiwanese real estate giant Jiashanlin Institution and the subsidiary “Jiashanlin Entertainment Co., Ltd.” established in 2016. ARPG games. And how did these two irrelevant industries meet? The game industry is too popular, or is it just because of personal martial arts dreams?

We do not know the reason, but it is obvious that more and more domestic development teams have rushed into the game track built on the basis of national style. This kind of healthy competition may bring players one after another in the foreseeable future. Excellent and playable domestic games are a great thing.

Wander around the rivers and lakes freely

Martial Skills Video of “The Destiny of the King II”

“The story happened in the mid-Northern Song Dynasty. After the court and the northern forces entered into an alliance, the border confrontation has eased a bit, and the confrontation in the northwest has not yet taken shape. This has resulted in the gathering of merchants from all over the country, the more developed economy and trade, and the entire capital city full of luxury. Behind this prosperous and prosperous people, the entanglement of all parties has led to an unknown force that is playing in the dark. Numerous obscure and inexplicable small incidents are finally combined into a huge conspiracy.” Jiashanlin team commented on the background. Described.

In the game, the player will play the protagonist Zhuge Yu, whose father Zhuge Wei is a loyal hero, but ends up injustice. At this point, he secretly made up his mind to eradicate the world’s evil. It is worth mentioning that well-known figures such as Bao Zheng and Gongsun Ce will play important roles.

In terms of the screen, the official said: “”The Destiny II” uses a seamless map, which is a vast map to represent the overall martial arts world. Players will be able to explore the strange mountains and waters more freely and have more A real world experience. In addition, there are many hidden caves in the game. Players need to search through various clues before they can step into the blessed land.”

To put it bluntly, the high-degree-of-freedom martial arts world built by the Jiashanlin team gives players more possibilities for exploration. The seamless design of the map makes the transition loading instantaneous, making it easier for players to explore freely in the open world. .

The scenery is solid, but in terms of character drawing, it has been criticized by netizens. It seems that it is the only thing that can prevent players from “sweeping the black and evil”. Fortunately, the general direction of the game is not affected by it, and I hope that it can be properly resolved in the later stage.

The perfect combination of wit and fighting

In “The Destiny II”, the character hexagrams will determine the “passive attributes” of the characters. In the initial background story introduction stage, the game will provide a variety of options, and the result after the selection will become the result of the player character’s “fortune-telling”. The corresponding attributes of the gossip are in accordance with the “Zhou Yi Shuo Gu Zhuan”: dry is the sky, kun is the earth, earthquake is thunder, sunda is wind, ridge is water, li is fire, gen is mountain, and exchange is ze. 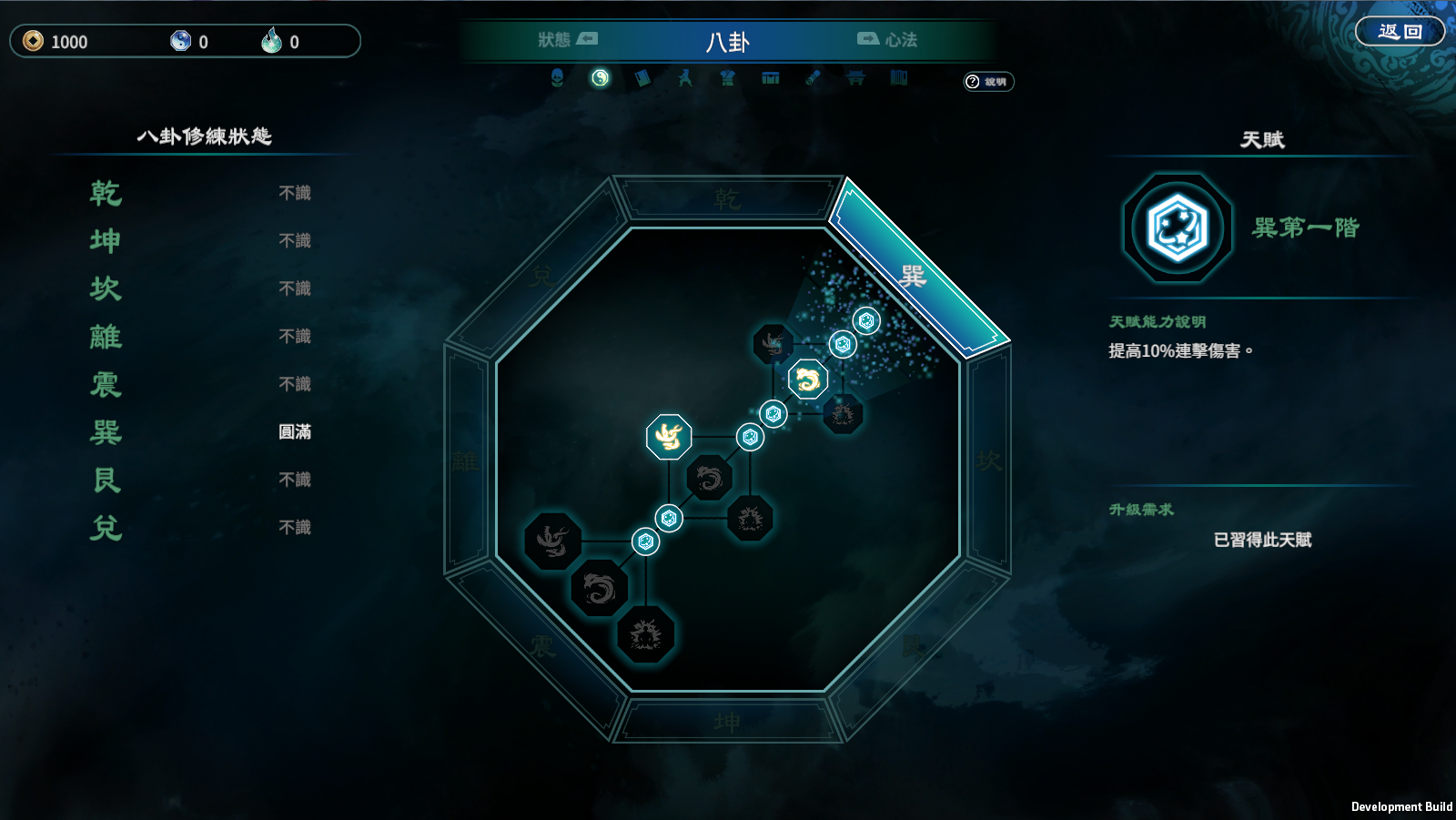 The Guaxiang system is quite different from the previous work, and it is specifically manifested in its ability. For example, in “The Destiny of Qi Yu”, Gen, as an alert, will reduce his own damage, and in this work, he will increase his own damage output ability. Of course, there are other changes to the hexagram abilities in the game.

The biggest innovation of this work is the new more strategic “skill tree” inside the hexagrams. Players will continue to upgrade to obtain the gossip points, which can be used to add points to the hexagrams. Each hexagram can add up to 9 Gua point.

“The Destiny of the Destiny II” pays more attention to how to counter the enemy’s attack than the previous one. In the picture below, the appearance of “eyes” on the enemy’s head usually means that powerful moves will be used, just like the “Danger” in “Sekiro” The same, just change the position of the character, and at this time, the player can interrupt his moves by releasing the skill hit, and let the enemy enter a weak mode called “Qi Jue”.

The equipment and martial arts that players carry and use will often determine the fighting style in the game. There are four types of weapons in this game: knives, swords, fists, and long handles, each of which has a variety of martial arts to learn. The martial arts can be equipped with up to four sets, but players can flexibly match them according to personal preferences——” “All-in-one” or “Mix-and-match”, you can not only match the same martial arts, you can also switch between different weapons, martial arts to attack opponents, it can be described as extremely free. 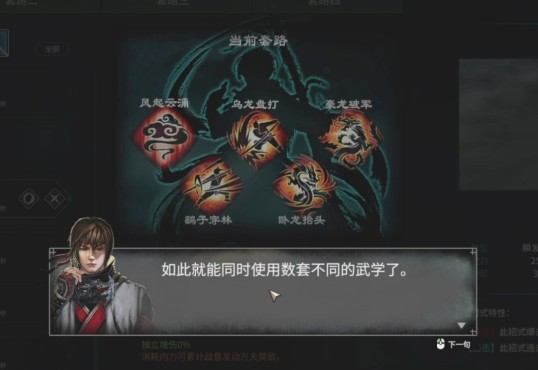 All in all, in terms of game fighting, this game has a more obvious improvement than the previous game. From the offensive gradually tending to defense or has become a new branch of the RPG category, it can be seen that the Jiashanlin team is keeping up with the trend of the times in this regard.

Compared with Wudou, the weight of this game is relatively heavier. In the previous game, the “show” mechanism is a weapon for players to solve puzzles and push plots. “Destiny’s Mandate II” exaggeratedly added three different interactive options-“ignite”, “lucky”, ” Destroy” and the interactive system is very realistic. For example, if the player uses “Ignite” on the wood, it will be burned out; if the player uses “Ignite” on the weapon, the protagonist will cause the weapon to become hot. Unable to interact with it for a short period of time.

Interestingly, most of the destructive “malignant” interactions will have a negative impact. For example, when players blatantly stand in front of villagers and light haystacks, they will be regarded as dangerous people, which makes the surrounding people witness this bad behavior. Of villagers refused to interact with it.

Of course, these interactive methods are not used to facilitate the players to perform “strange and weird” operations. They are widely designed in the puzzle-solving part of the game, such as the bronze mechanism in the village chief’s house. Players need to use “lucky” in the direction. Interaction, solve problems by pushing objects.

This kind of “kindness” for forcing objects to move is just like Sokoban, and its unique mechanism is an interactive function with extremely high value in the late game.

The core wit gameplay “showing” system of “Reversal Judge” in “Destiny II” has also been strengthened-the protagonist can find and capture the opponent’s feet during the conversation with the NPC.

When a flaw is captured, the player can “show” clues or collected evidence to “explore” the loopholes in his speech, and then promote the development of the plot.

This lively and interesting new interactive mechanism runs through the entire process of the game, not only restores the link of fighting wits and courage in martial arts novels, but also brings players a happy and not boring game experience.

On the whole, compared with the “Three Swords”, “Destiny’s Mischief II” has less “celestial spirit”, but it has more “secular” due to the addition of detective and puzzle-solving elements, which is based on the enrichment of the plot. In addition, players are presented with a “small” river and lake full of fireworks, and for the main ARPG “Fate of the Destiny II”, it is no exaggeration to say that its design in action, combat and other methods and gameplay can even be compared with ” “Three Swords” Breaking the Wrist-Retains and strengthens the core of the “Fate of Heaven” series of gameplay, including interaction and the ACT system around the battle with the “reverse referee” “show” characteristic gameplay is really eye-catching.

The fly in the ointment is that the current game optimization problems have caused players to have a headache. According to players, the frequent occurrence of game memory bursts and flashbacks has caused the smoothness of the experience to be greatly reduced. Fortunately, the core content of the game will be of high quality for a period of time. The interior continues to glow and heat, attracting more players to stop and experience while guaranteeing the lower limit. The upper limit of “Destiny’s Oddity II” is closely related to whether the optimization problem is solved or not. The future is flat or upturned in the hands of the Jiashanlin team. .