GameLook report/What can a deer do in the city? “DEEEER Simulator” (hereinafter referred to as “Very Ordinary Deer”) developed by Gibier Games and published by PLAYISM was launched on Steam on November 23. It currently ranks first in the new product praise list with a good score of 90% of Steam praise. The price is 50 yuan in the district.

This is a very funny, sand sculpture style game. It’s worth mentioning that this game was available on Steam as early as January 21 last year for a trial version. Its unique creative and unconstrained game content quickly attracted the attention of the majority of players, and various words related to the work. The stalks spread on the B station, and the feedback became more and more popular. Gibier Games, a personal development team from Japan, constantly improved the game based on the feedback content, and finally met with the players.

“”Very Ordinary Deer” is a game that wreaks havoc in a slow life city. “The developer introduced: “In the game world, players can either enjoy a good time with other animals in the city, or they can choose Destroy everything in the town. Of course, if everyone embarks on a destructive “deer” life, they will eventually be hunted down by the police, and the fate of being caught will be very tragic.”

Do whatever you want, but not exactly what you want

“Very Ordinary Deer” is an extremely nonsensical sand sculpture game. Players can pinch the protagonist’s face in the opening part and look at the dense adjustment bar. It really has everything, but this low-poly character model is recast after pinching the face. What kind of visual “feast” will it bring? Products, fine products. 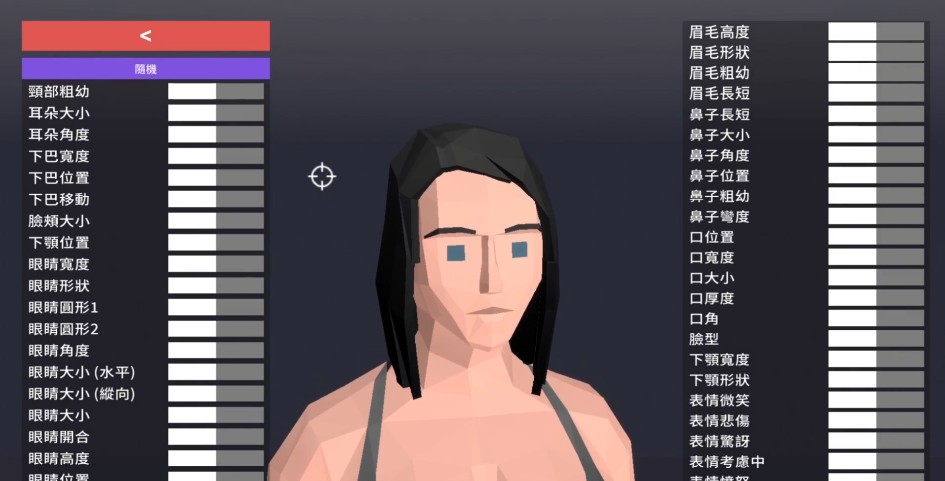 What’s depressing is that the protagonist you have worked hard with soy sauce just came out, and instead your soul got into the deer that survived. It is really dumbfounding. From this short and witty opening. It’s not difficult to see the funny tone of the entire game. On the other hand, as far as the character bounces on the ground after being knocked into flight, the expressive effect of this physics engine is excellent.

The body is not there, but the soul is still there. After experiencing the cruelty of being harmed by “humans”, the protagonist learns from his pains and turns into a deer of justice, “helping each other when the road sees injustice” in this open city.

The operation method is simple and easy to understand, move through WASD, space jump, Shift accelerate sprint, when the player is close to the NPC in the game, it can also trigger various interactive actions, through the control of the arrow keys to achieve peace, dance and deer transformation. Please, dancing is actually a literal meaning, but what is the strange ability of deer?

Deerization can turn the human NPCs in the game into the same kind of deer and use them for you. To put it bluntly, this is actually a process of recruiting children. The deerized characters will always follow in your footsteps, because the game has Similar to the “Deer Disaster Degree” system of the wanted stars in “GTA”, many times players have already gained high-level wanted levels before they started messing around, and they were shot dead by the dispatched police with a look of confusion-your little brothers are here The city will “unintentionally” destroy everywhere.

The so-called behavior of the younger brother, the boss pays the bill, couldn’t be more appropriate.

The police in the game are not a “regular army”. Various animals including sheep, polar bears, rabbits, etc. have appeared one after another, and their abilities have gradually increased with the level of wanted.

The scene of the battle with the police is even more “grand”. There is no rigor to say. Lu Ge is shooting frantically with a rifle and pistol. Of course, what will be ushered in after the crazy mowing will be the “giant fear of high bear” to the player. Fatal blow.

Players can control the deer brother to drive a variety of weird vehicles, such as a single-person boat drifting, and even horses, bulls and other animals. This strange setting is really eye-opening.

In addition, Brother Deer can fly like Spider-Man, but Peter Parker uses spider silk, which uses his head to open the way. The specific operation of launching the head mallet requires the player to keep aiming at the target and holding down Q. However, the game design is relatively rough in terms of operating feel, and the steering is a bit too cumbersome in actual play, and this problem still exists in the official version. I hope the development team can take action on this in the future.

It can be said that this is a “deer” flying that eats rubber fruits. Players can use their infinitely elongated body to do “whatever they can”. With the excellent physical performance of the game, they can enjoy flying and escape to the fullest. Added humorous and interesting program effects to the game.

Funny, but not entirely funny

Different from the common sand sculpture games on the market, “Very Common Deer” also hides a heart with a story under the humorous appearance.

The plot ending of the game triggered a heated discussion among netizens at station B, and Ji Wuming’s “Who killed me, I killed who again” was like Ji Wuming.

In the game plot, the player will start a desperate struggle with the future self, which is mainly divided into three stages: the first stage is to fight the future deer; the second stage is to fight the future deer and the curse of the deer; the third stage is the transformation War. The first two parts of the boss battle require the player to avoid the opponent’s skills and output them in the hard straight stage after releasing the skills. The overall difficulty is not high. Basically, the player can easily pass after being familiar with the enemy’s attack rhythm.

When entering the third stage of the Boss battle, the player will “drive” the animal “Mecha” to engage in a turn-based battle with the future self. This part is to fight brainpower and strategy. The gameplay is similar to rock, paper, scissors, and one thing loses one thing. . After passing, the player will face a choice: to kill or not to kill the future self, with a completely different ending behind each answer. This choice design with a sense of unknown is not unwise. In the end, the two endings have different symbolic connotations for players to interpret. Although the size of the game is small and the actual play time of the player is relatively short, the design of this double ending actually makes the game present the richness of “the sparrow is small and has all internal organs”. Sense, the unconstrained picture design and its profound game ending form a sharp contrast, a sense of reversal from joy to “sadness” emerges spontaneously.

The operation and gameplay of this game are easy to understand and suitable for all ages. Whether players are game masters or rookies, they can experience the decompression fun it brings without distinction. The unique and nonsensical painting style and character settings are more like an “atmosphere group.” , It played a role in paving the way for the funny atmosphere of the game, and the setting of the plot and the double ending played a finishing touch for the later experience of the game and the ending of the game, but only in this way, it is difficult for players to accept and call it interesting. 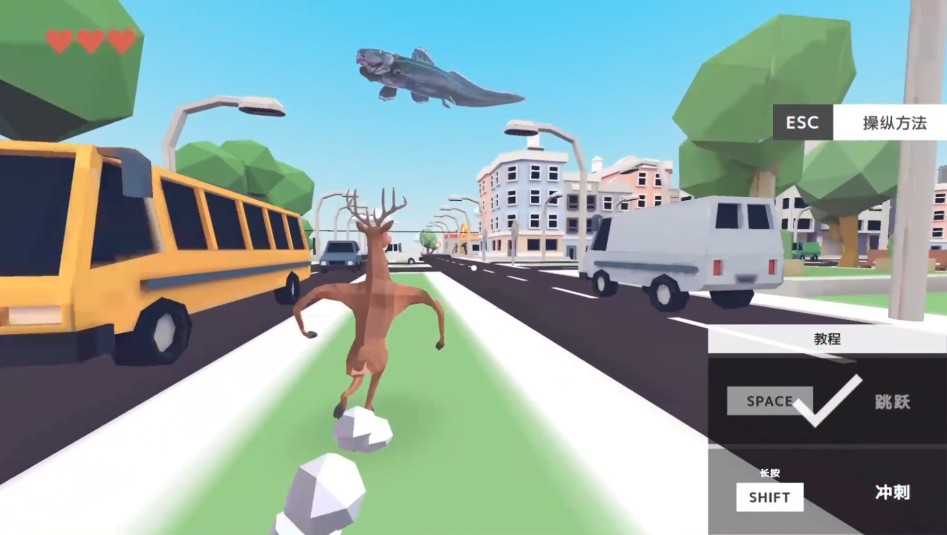 Looking at the overall situation of the game, it is not difficult to find that the core of the fun of “Very Ordinary Deer” comes from its exaggerated but no lack of real physical performance that brings the randomness of the results to each player. In fact, it is the core of curiosity and sand sculpture games. It’s not uncommon, such as “Simulation Goat”, the funny “Goose Simulator” which is more similar to this work, and “Overcoming Difficulties with Bennett Foday” which has abused people thousands of times. 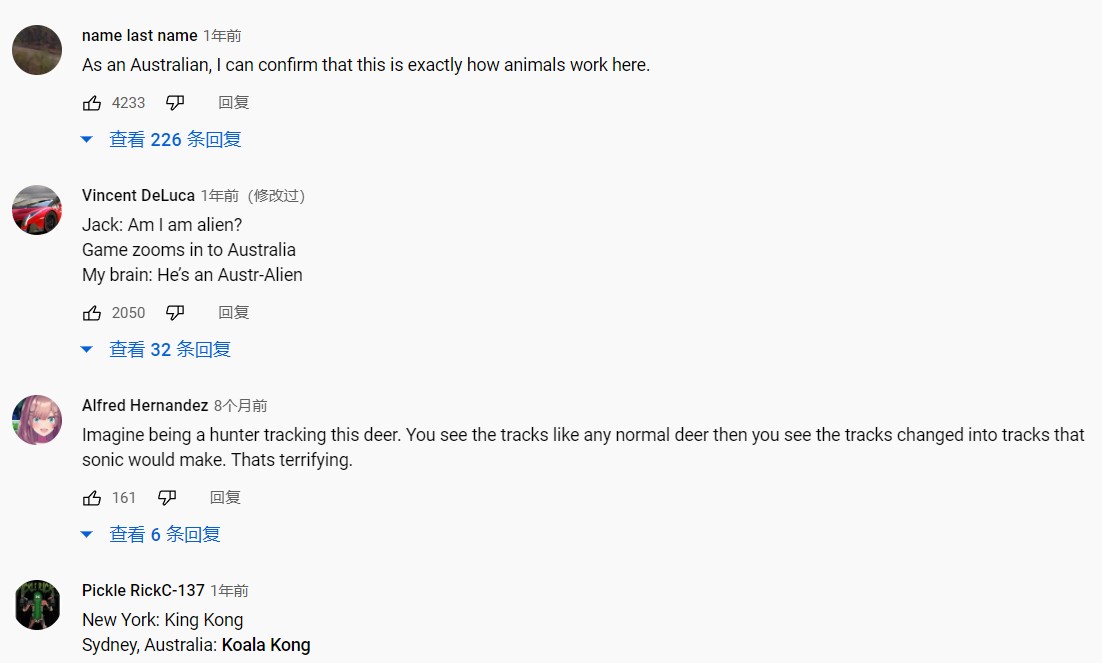 It can be said that every player who has experienced this type of game has different understanding and feelings after experiencing it. In the course of the game, the consequences of the player’s actions can be described as diverse. This unique experience of making the decision and “suffering” will be fully demonstrated. At the same time, this unique experience reveals The true feeling is more helpful to spread to the outside, arouse players’ discussion and resonance, which effectively arouses the interest of other players to come and try.

On the other hand, the “Very Ordinary Deer” development team also uses social platforms such as YouTube and Twitter as media to help game products become viral through the promotion capabilities of anchors and Internet celebrities. The three games mentioned above They all made a lot of money in this way: “Simulated Goat” collected $12 million in half a year; “Overcome difficulties with Bennett Foday” attracted $2 million in two weeks; “Goose Simulator” for three months Sold over a million sets.

Based on this, we can see a few ways: non-unique and non-transmissible linear game experience is gradually vertical and niche, while products that are gradually popular and more likely to detonate the market often give players a unique and spreadable gaming experience. It seems that the potential of the game “Very Ordinary Deer” has not yet been fully tapped, and the prospects are promising. In the future, the Gibier Games development team can bring more interesting, more decompressed and fresher game content to each player. .