There are too many bugs to get out of the circle?This two-dimensional mobile game has a life-threatening update, and it has been watched by onlookers.

GameLook report/BUG, a topic that silences players and makes R&D tears. As a widespread problem in the game development process, it usually accompanies the long-term operation of the game. No top game company can technically eradicate this stubborn disease. Players have become more and more correct in the course of the game over the years. The BUG is not strange.

However, just recently, “Eternal Tree”, developed by Shanghai Guangyan Network and represented by Bilibili, unexpectedly went out of the circle due to a bug. This card game should have become a clear stream in the current two-dimensional mobile games with its fresh style, but it has never thought that it has become a hot topic for two-dimensional players due to the continuous BUG issues within a week of going online.

At the 2020 Bilibili game new product launch conference, “Eternal Tree”, along with 10 other games of different styles, became the new product that was highlighted at the conference. Unlike most of the two-dimensional games on the market that rely on artistic power, this is a game that relies on “the copywriting team and the art team are crazy C”.

At the beginning of the game, only the first section has a half-hour-long text plot. At the same time, different from the general two-dimensional game that relies on the dialog box at the bottom of the screen to advance the plot, the plot copy of “Eternal Tree” is completely “paved” on the screen, which can be described as a true “visual novel”.

What matches the presentation is a unique narrative. In addition to the common dialogues, there are a lot of environment and character descriptions in the plot copywriting. Even the players who were originally witnesses to the different world have become “people in the painting” in the plot performance of “Eternal Tree”. The other game characters together serve as the objects to be narrated by the narrator.

With players becoming more and more enthusiastic about fast-paced games, such a narrative rhythm is undoubtedly a gamble. What makes the R&D team full of confidence in this gamble is the very “clear” plot setting of the game itself.

The story of “Eternal Tree” has no doomsday wasteland, nor hardcore science fiction. Instead, it takes place in a fantasy land where God’s civilization and modern civilization are intertwined-Titar Yella. Modern people explore the relics of the gods here as “explorers”, and through the research of the relics, civilization has achieved rapid development. A player who is also a “seeker” accidentally encounters the mysterious doll Altai Misia, and is thus involved in a dispute that spans the age of God and modernity. 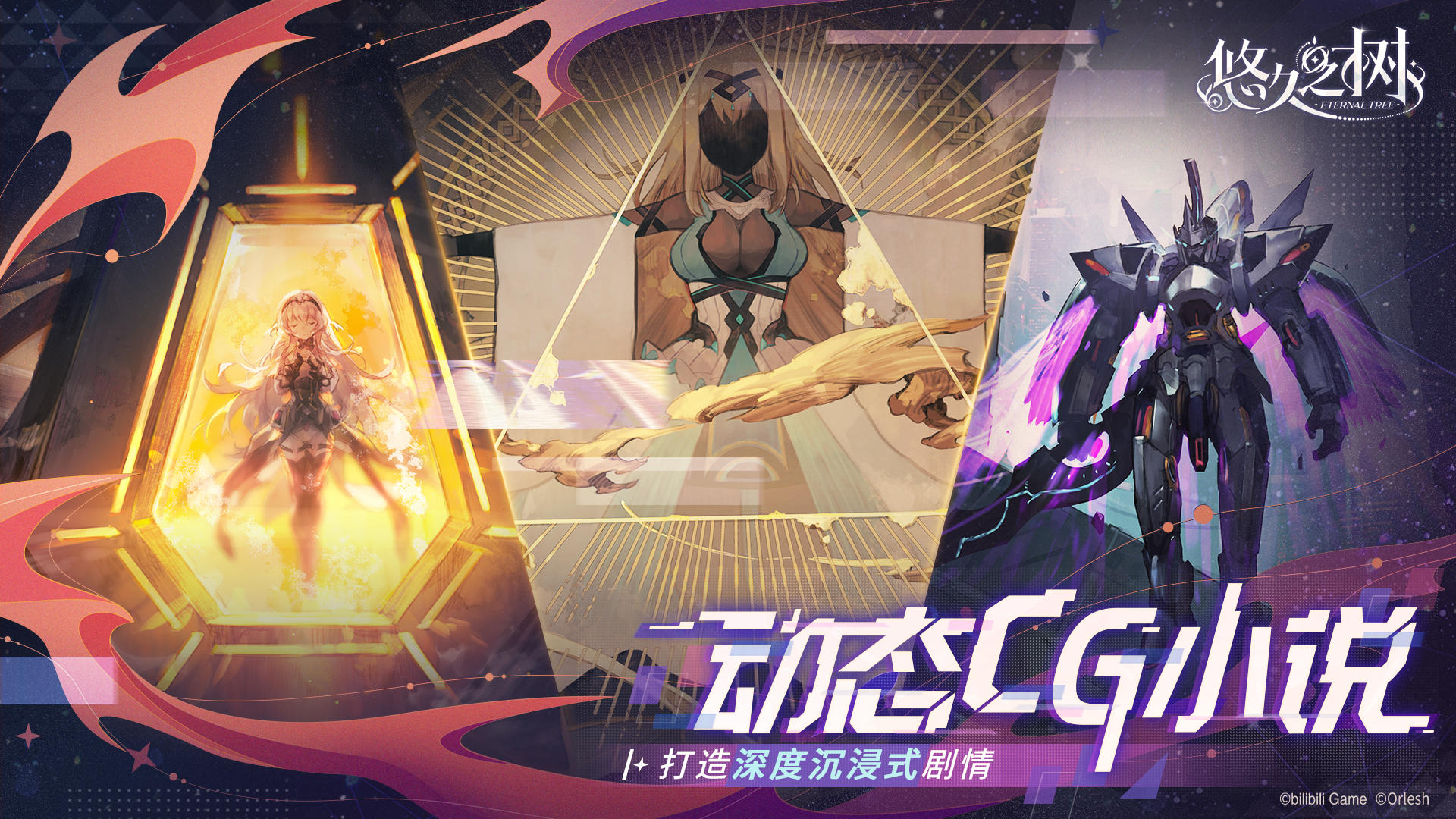 Therefore, whether it is the art style or the narrative method, “Eternal Tree” appears to be a little bit incompatible with the current “black and deep disabled” sci-fi two-dimensional mobile game occupying the C position. It is not difficult to understand why this game can become The focus at the B station press conference.

In contrast, the gameplay of “Eternal Tree” does not have much groundbreaking, but has become a master of the classic gameplay of card games. Lineup restraint, weapon equipment, development system, skill combination, etc. are all available, and it has become a hardcore card game with a high threshold. There are many strategies shared by pioneer players on Tap Tap. Even newcomers have a lot of “black words” in the strategy. It is not easy to master the mechanics of this game.

In general, the slow and deliberate narrative rhythm, fresh art style and hard-core gameplay make If everything goes well, “Eternal Tree” should become a slightly niche but will make the core player group love it. For. However, the biggest difference between reality and games is that the plot will never follow the established script. The invulnerable BUG has allowed this game to go on a completely different trajectory from the established route since it was launched on November 24th.

On the day it went live on November 24, a series of bugs appeared in “Eternal Tree”. According to a netizen from NGA, early bugs include but are not limited to skip the main line automatically without pushing the picture, the facial features disappeared, ten consecutive draws cannot trigger the guarantee, Android players cannot trigger the help bonus, unlimited resetting of the store, etc. . Although many new games will encounter similar bugs in the early stages of launching, it is still very rare that all elements in the game, such as “Eternal Tree”, from combat, vertical drawing, card drawing, and shop, appear to be bugs.

Faced with such a wide range of BUGs, the R&D team also followed the “industry practices” for emergency shutdown maintenance. However, the first emergency maintenance was delayed for nearly two hours for some reason. After the service was opened, the operation announced that there was still a vicious BUG that could not be fixed for the time being, and the R&D team could only “fight another day.”

What everyone did not expect was that this temporary “abandonment of treatment” was only the beginning of the BUG that continued to emerge. In the following two days, the players discovered a “benign” BUG, ​​and many players have received reservation reward emails many times. In this regard, the solution provided by the operation team is to “ban” players who repeatedly receive emails for one day, and on the day of the ban, all players who have not received repeated emails will be issued with email rewards again, and the players who have been banned will be compensated accordingly. , And once again apologized to the players for his “deficiency in technical ability”. 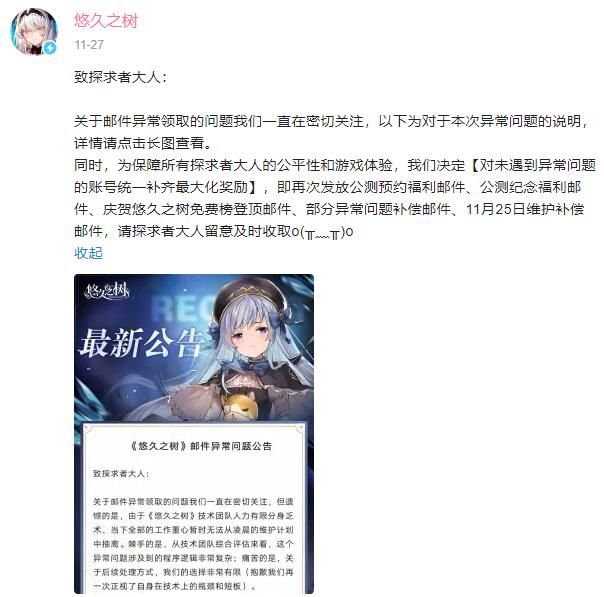 Immediately afterwards, a more outrageous BUG appeared in the game. Players discovered that the game’s guaranteed draw mechanism could be triggered repeatedly by a single draw. Due to the sudden incident, the operation team even carried out emergency maintenance before issuing an announcement, but the result of the maintenance was still “abandoned treatment”-due to the excessive technical difficulty, after a long period of maintenance was postponed for several hours, the operation team chose to All players who did not “benefit” from this BUG directly issued two SSR characters with limited UP. 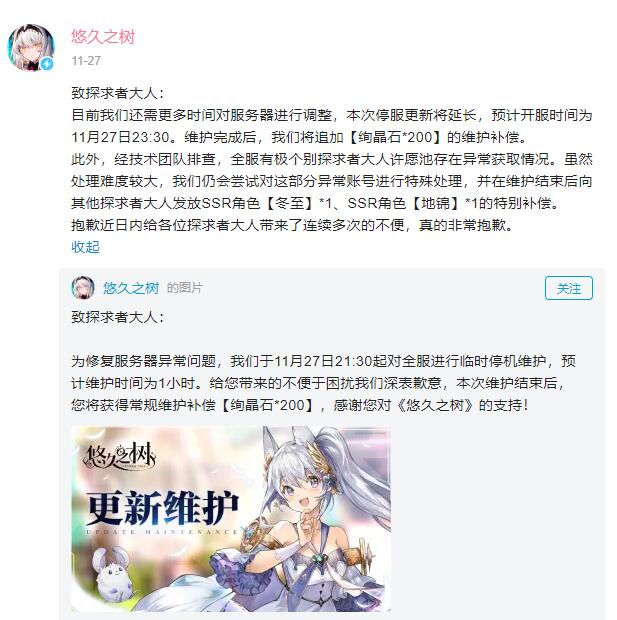 When it first launched, the slogan of “Eternal Tree” was “Send 90 draws and guarantee three SSRs”. According to the calculations of posting netizens, after only the above three major maintenance, most new players can achieve at least 6-8 SSR starts (even many players can start with 10 SSR), and after passing all the relevant cards Keep at least one and a half well drilled (“one well” refers to the number of times that one SSR is drawn out).

The “surrender-style” welfare distribution method of the operation team has directly led to many players with poor luck choosing to rebuild an account to “reincarnate”. In the player community, players who were originally not interested in this game faced such generous benefits, and they also posted posts asking whether this game is worth entering the pit.

It is worth noting that after a week of going live, players are still continuously feeding back more new BUGs, both “benign” and “malignant”. Considering that the technical team has failed many times before, at present, “fixing bugs” and “distributing benefits” may still be the main topics of the “Eternal Tree” technical and operation team in the short term.

Popularity ratings have both picked up, but the alarm bell will continue to ring

Judging from the results, although the continuous BUG has made the technical team scorched and the operation team crying, the helplessness of “laying down and ridiculing” and the compensation of “smashing the pot and selling iron” have allowed “Eternal Tree” to gain the sympathy of the players. And support.

In addition to the many circles mentioned above, players are attracted to the pit, and the score of this game on Tap Tap has also picked up. 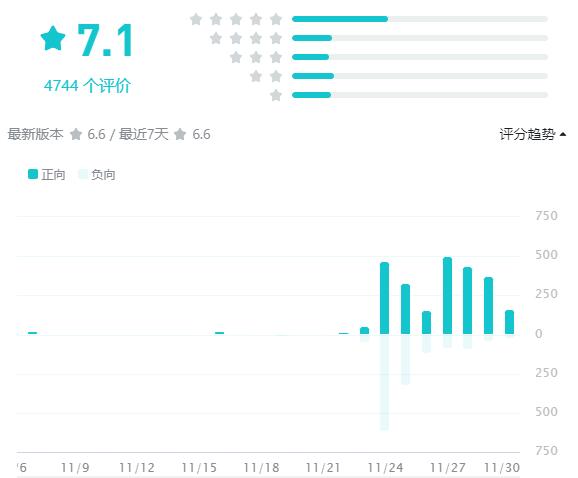 It should be pointed out that this is not because the “Navy Army” is reviewing reviews, but many players are really satisfied with the game plot and gameplay after being attracted to the pit by high welfare. Of course, they do not deny that “the operation is really too much.” 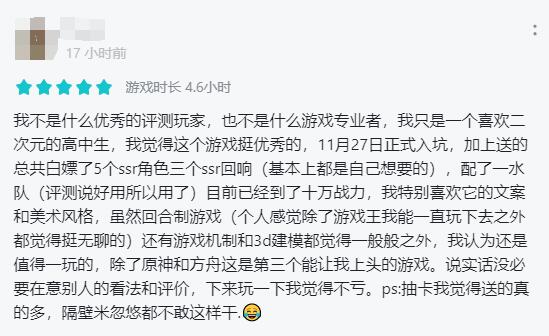 In terms of data, “Eternal Tree”, which topped the App Store free list on the day of its opening, has a relatively stable performance on the best-selling list, and is still hovering around 50 in the best-selling list. Although it has not completely got rid of the influence of BUG on the game experience, there are various signs that players still have a lot of expectations for the small and fresh “Eternal Tree”.

In fact, looking back at the history of the development of two-dimensional mobile games, it is not uncommon to see examples of continuous bugs in the initial stage of server opening due to technical reasons. “FGO”, which now ranks among the top three in Japan’s two-dimensional mobile games, left a black history that was later called “miracle 48 hours” by players due to over 48 hours of long maintenance at the beginning of the service. In China, the “War Shuang Pamish”, which is now the ceiling of the two-dimensional action mobile game, has also been dubbed “Double Treasure” by players because of the continuous BUG in the early stage of the service.

Nowadays, players tend to be more tolerant of natural disasters with “continuous bugs”. After all, neither players nor game manufacturers want to see frequent bugs that make a game with full potential unfortunately die. As long as the technical team speeds up to fix the BUG while the operation team also shows enough sincerity, players are usually willing to continue to support.

However, GameLook believes that this phenomenon of accidentally getting out of the circle because of “surrender-style benefits” is obviously not a situation that should occur during the normal operation of a game. It is also a helpless move for game companies to exchange benefits for word of mouth. 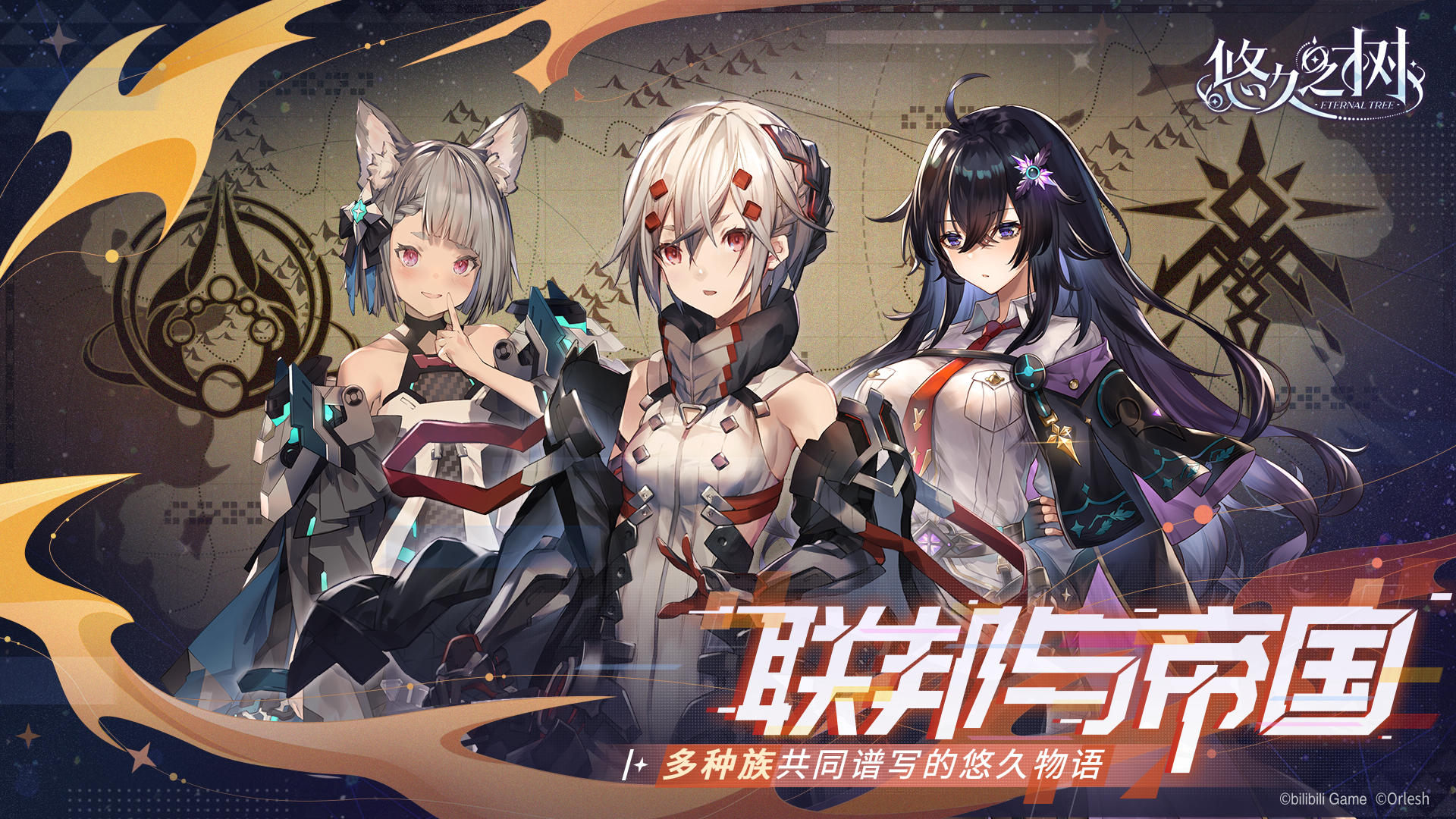 Therefore, for “Eternal Tree”, it is still necessary to face up to the problems of the product itself. Players and peers also expect developers such as “FGO” and “War Double” to achieve a real comeback with solid game quality. . For other games that have not yet been launched, the troubles that “Eternal Tree” is encountering do remind other manufacturers that they need to make full preparations before the game is released.

Aksys Games repeats the in-house show All Aksys in February