It has been developed by a 2-person team for 4 years, and Steam praises 90%. This 3D “Desert Island Survival” game is full of sincerity

GameLook report/With the increasing popularity of open world games and self-driving game experience concepts, games in this category have sprung up in recent years and are emerging in endlessly.

In this mixed environment, an open world, 3D simulation business game called “Len’s Island” (hereinafter referred to as “Len’s Island”) developed and published by the Australian game development team Flow studio was launched in November Steam was quietly put on the shelves on the 26th. After a period of testing and adjustment, it achieved a good result in the SteamDB new product popular list and fourth in the SteamDB new product popular list with the excellent quality of Steam’s praise rate of 90%. The current national price is 80 yuan.

According to the official description, “Lane’s Island” combines architecture, agriculture, crafts and fierce battles, dungeon battles, and exploration. Players will experience the fun of building on this beautiful island while exploring the underground. Outside of the city, the unsolved mystery of the island is gradually solved.

Unfortunately, the game does not support simplified Chinese for the time being, which makes it lose some potential players.

It is worth mentioning that Flow studio is an Australian development team composed of only two people. This game took them nearly 4 years, and this creation process is really not easy.

Regarding the original intention of this game, the development team revealed: “This is a lot of game styles that bring excitement and progress, all of which are in a dynamic and fascinating world. Caters to die-hard dungeon crawlers, house builders and decorations. Enthusiasts, explorers and finishers, agricultural fanatics, collectors hoarders, and people who just want to live the simple life of cutting trees when the sun goes down.”

Cut down new tricks, step on logging to find out

Compared with the initial test version of the mouse operation mode that organizes all activities, the development team has made changes and improvements to the official version of “Ryan’s Island”.

“We have added additional WASD control schemes and controller support.” The developer described the operation changes. “In the game, players are allowed to press and click or use automatic collection to make resource collection activities easier.”

The innovative content makes players no longer trapped in a bit of numb quagmire. In addition to bringing players a smoother game experience and improving the efficiency of game operations, it also greatly reduces the workload of the players’ fingers.

However, in some occasions where a little bit is needed, the “shining points” are still retained, such as logging. When the swing is over, golden “rhythm points” will appear. Players can chase down the “rhythm points” to cause more damage to the trees. , Which is a crit.

This kind of operation setting is not unwieldy, because simulation business games do not rely on techniques and awareness like RPG and FPS games to gain a steady sense of accomplishment. It requires players to invest more time and energy in strategy and Hepatic materials and other non-manual and conscious operations, and many and many repetitive operations, the source of their sense of accomplishment, frankly speaking, there is basically only one situation-when every small project or major project is nearing the end, and the game The initial dullness is inevitable. This is undoubtedly the biggest pain point that leads to a generally shorter game experience for pan-players. The early dullness makes them reluctant to kill time, which means that the pleasure brought by this category of games will never be as expected. And to. Obviously, the development team has keenly noticed this. It organically combines simulation and light rhythm. While collecting materials, it weakens the boredom caused by frequent operations to a certain extent.

The sparks from the collision of the two elements are exceptionally fresh and dazzling, and have won unanimous praise from the players. Of course, this technique can be used not only for logging behavior, but also for collecting various resources, provided that you are “happy” with your fingers.

There are wood, stone, metal, crystal-like materials and other materials that players can collect in “Ryan’s Island”. Compared with most simulation games, the richness of its materials and the fullness of the game content still need to be seen by the wise. wisdom.

The modern version of Robinson Crusoe

The fun degree of the material collection process determines the player’s willingness to continue to experience the strength of the initial game. Material construction and asset realization are the core of the fun, and its strengths and weaknesses will inevitably affect the fluctuation of the player experience curve.

Based on this, we can safely conclude that if the fun core is not good enough, no matter how big the article is on the basic process, the development team will not be able to support its foothold in the vast game market.

Obviously, Flow studio knows this. “Lane’s Island” has a variety of architectural blueprints, whether it is a comfortable and cozy cottage or a luxurious mansion, players can accumulate materials through their hard-working hands to build.

In addition to “dead objects” such as buildings, players will also experience the joy of cultivating “living objects”-growing vegetables and flowers.

“Using farms to grow food provides motivation for players to venture into dungeons and long island explorations. Plant exotic plants and flowers and sell them back to villagers in exchange for gold.” The development team described this: “Planting large farms throughout the forest , Or take care of the small flower beds on the balcony.”

With the repeated rolling of the small process of cultivation, selling to earn gold or self-use, and re-cultivating, this kind of operation activity similar to the pre-dinner dessert will bring players a kind of happiness of cultivation, and the front and rear closed-loop experience design will be greater A degree of motivation for players to continue their interest in “work”, and ultimately achieve “XX freedom” that is difficult to achieve in life.

The embarrassing thing is that in the previous test phase of “Lane’s Island”, because there are no other edible plants except blueberries, the so-called realization of “XX freedom” can only be “blueberry freedom”, and the relatively blank planting system has become a major design. Mistakes, the player’s experience of eating blueberries and “vomiting” made passers-by even more ridiculous.

However, the development team actively carried out content filling following the release of the official version. The addition of passion fruit, grapes and other crops enriched the player’s recipes. The speed and attitude of this improvement is really gratifying.

The game “Lane’s Island” has a relatively sound weapon and equipment system. Better weapons and equipment can help players perform process operations more efficiently. What’s interesting is that in addition to the basic links of collecting, building, and planting on the island, players You can also rebuild certain public facilities to get rare rewards, such as the dilapidated suspension bridge in the game.

On the whole, the player’s situation in the island is similar to “Robinson Crusoe”, but it is a modern version.

An underground adventure that is hard to criticize

The weight of the combat link of the game is not inferior to that of the operation link, or even worse.

“Lane’s Island” is also a fast-paced, skill-driven dungeon exploration game that focuses on participating in various battle types and loading combinations. If players are bored with building houses, caring for crops and meeting local citizens, there are There are many deep and dark caves for exploration.” The development team introduced.

Sorting out the housework, packing up the equipment, breaking into the dungeon to explore the unsolved mysteries of the island is the second core gameplay of this game.

During the adventure, players will experience the gameplay design of dungeon games. At the same time, the development team will also combine puzzle-solving elements to make the entire dungeon full of crisis and excitement, which can be called the third-person “Forest” .

The expensive equipment purchased with gold coins is of course not limited to collection. High-quality weapons will cause considerable blows to the underground monsters. Positioning, dodge, and insight into the enemy’s beat rhythm are extremely important when singled out, and when the player Faced with hordes of young people, it is the best way to clear the level by opening and closing, rounding up the weapon and slaughtering the enemy.

But don’t be naive to think that you can do whatever you want with weapons alone. In a boss battle, players who don’t have basic operations will eventually become paper tigers who are powerful and can’t stand a blow. For example, some bosses will hide in the dark insidiously. Stand alone and wait until the key organs are triggered, and suddenly attack the player.

The development team’s design for the dungeon exploration part is obviously very careful, but it is still a little weak in motivating players. Perhaps it overestimated the player’s abundance of energy, or failed to take into account that the construction and operation of the island has been consumed. In addition to the players’ concentration, the high-intensity, large-length monster fighting and puzzle-solving content of the underground part will eventually make it difficult for players to fist the fourth hand, and it is difficult to parry, resulting in a sense of separation between the game’s farming construction and monster fighting.

The single source of equipment and the lack of types are unable to positively stimulate players’ willingness to explore dungeons.

In addition, perhaps due to lack of manpower and technical reasons, the non-roguelike fixed expedition and the monster refresh mode have greatly reduced the gameplay of “Ryan’s Island”. 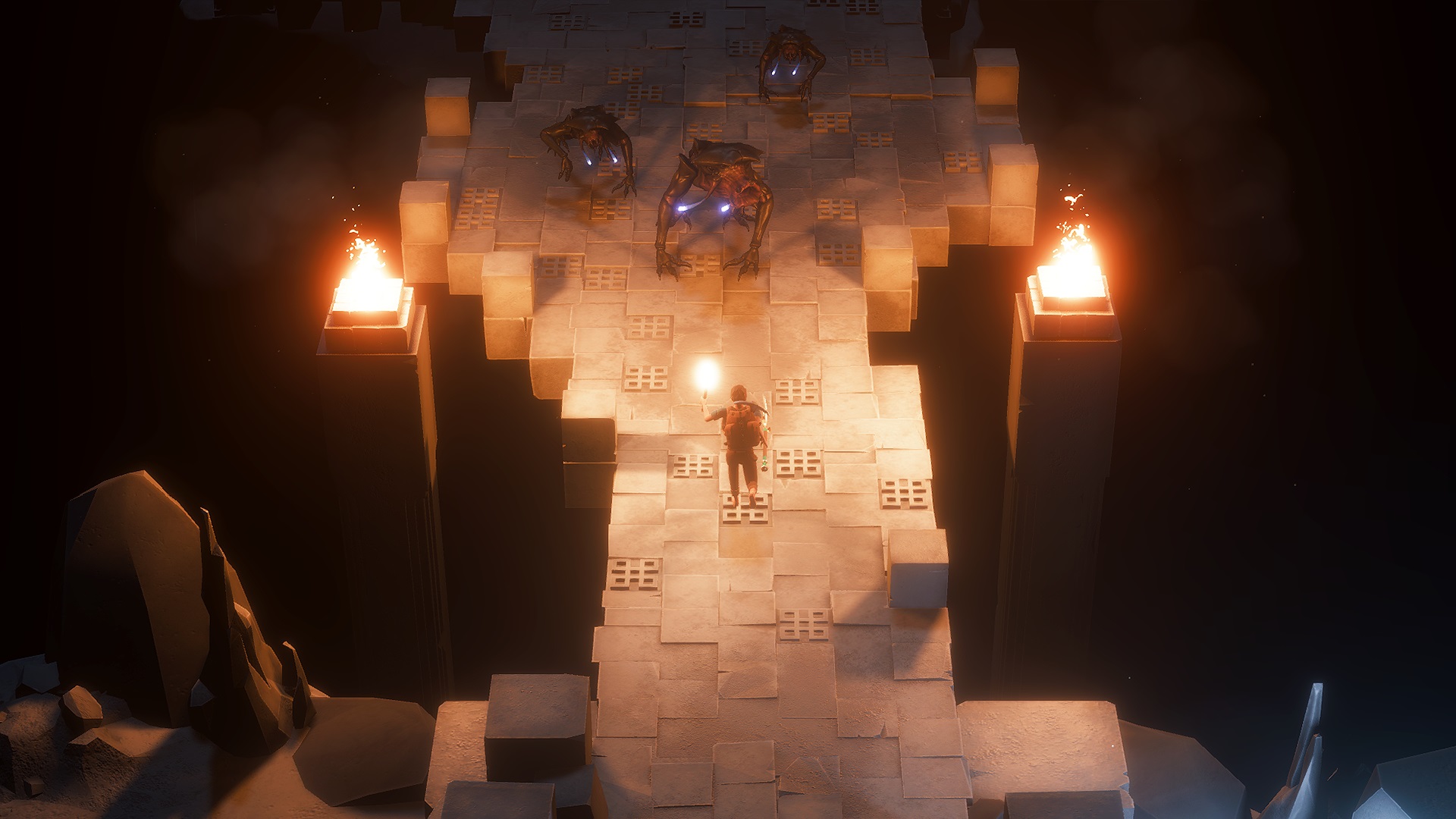 The characteristics of the game under the multi-element integration make the foreseeable upper limit of this game higher. Although it seems that it shows a little deviation and rigidity in terms of focus and mechanism, “Ryan’s Island” is still a novelty. , Have fun simulation games.

On the other hand, the competition in the game market is becoming more and more intense, and the courage of the development team Flow Studio to break into the siege with two people is even more precious. We have reason to believe that this Australian team will be able to use this game in the future. The creation is more reasonable, and at the same time, more exciting works are provided for the majority of players.