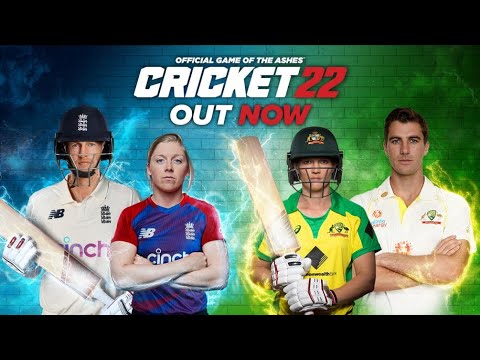 Nacon and Big Ant Studios present the launch trailer Cricket 22. This gets us in the mood for the sports game.

Cricket 22 is available for PS4, PS5, Xbox One, and Xbox Series X. Switch porting will follow in January 2022.

Cricket 22 builds on Big Ant Studios cricket simulations of the past decade and adds a new twist to the experience. For the first time in 4K resolution, an advanced new graphics engine, a narrative career mode and the most comprehensive selection of licenses and game modes in a cricket game yet Cricket 22 all fans have the opportunity to experience their sport in their own way.

“We loved making a game of cricket for the new generation the creative possibilities it gave us really helped Cricket 22 to take it to the next level,” said Ross Symons, CEO of Big Ant Studios. “From the licensing to the new Career mode and commentary team, we’ve worked hard to make sure this game will surprise and delight veterans and new players alike.”

Cricket 22 not only includes the traditional Ashes tournament, but also comes equipped with numerous additional licenses and is vastly expanded. Cricket fans will experience Australia’s Big Bash T20, England’s innovative The Hundred and the tropical CPL of the Caribbean and compete internationally with fully licensed teams from Australia, England, the West Indies, New Zealand and Ireland.

Big Ant’s commitment to equality and equal representation also ensures that the men’s and women’s games in Cricket 22 are included.

“We can’t wait for that Cricket 22 as the official game of the highly anticipated Ashes series hits shelves,” said Stephanie Beltrame, Executive General Manager Broadcasting & Commercial of Cricket Australia. “Big Ant Studios has once again delivered the best cricket simulation game out there and we look forward to adding new viewers to cricket this summer. It’s also great to have more leagues and wider representation in Cricket 22 to see what reflects everything that is so great about our national game that prides itself on being a sport for all.

Fans who purchase the game on PlayStation 4 and Xbox One will also receive a free upgrade to the nextgeneration hardware once they purchase it. As with other Big Ant Studios releases, Cricket 22 content long after publication. A first roadmap will be published shortly.