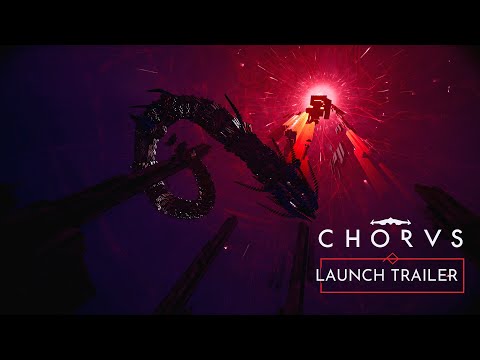 Deep Silver and Fishlabs show the official launch trailer Chorus. This determines the right atmosphere for the space shooter.

In Chorus Players take control of the ace pilot Nara, a fugitive seeking the destruction of the dark cult that created her, who must face her haunted past along the way. Together with her sentient starfighter Forsaken, she explores ancient temples, takes part in thrilling zero gravity battles and fights to unite the resistance forces against the cult (known as the Circle) and its leader, the Great Prophet.

The circle is ruled by the Great Prophet, but not much is known about this mysterious figure. Under his command, Nara and the Forsaken were responsible for many of the cult’s great victories and atrocities on its journey to rule the galaxy. Nara, once the coven’s deadliest warrior, is now the most wanted fugitive.

Players take control of Nara, once the deadliest warrior in the Circle cult, who has become the most wanted person. She wants to destroy the dark cult that once created her. In a true evolution of the space shooter, you have powerful weapons and mindaltering skills at your disposal. Together with Forsaken, her Sentient Starfighter, she explores ancient temples, fights in weightlessness and looks behind the facades of our awakening reality.

A journey of recovery

Players lead Nara, an outstanding pilot who teams up with Forsaken to confront her past. Your journey will take you across the galaxy and beyond the confines of reality. She fights for the reunification of the rebel groups, against the cult and their leader, the great prophet no matter what.

Journey beyond the void

A dark new universe full of mystery and conflict. Breathtaking areas are waiting to be explored: huge space stations and strange levels beyond our reality. Epic battles in weightlessness, both in the boundless cosmos and in narrow corridors. Chorus combines spectacular space exploration with fastpaced combat and action.

A pilot, a ship, a living weapon

Use and unlock powerful and deadly weapons and valuable combat upgrades. Master the starship’s incomparable drift mechanics and mindaltering abilities, teleportation and telekinesis. Fight against huge hordes of enemies and destroy gigantic battleships. Players combine the firepower of their ship to become the most powerful living weapon.

Play as a dual protagonist: Nara and her sensitive AI companion and Starfigter Forsaken, on a recovery journey

Fight and unite the rebels in the battle against the Circle and their mysterious leader, the dark prophet

Fight against hordes of enemy star fighters, huge battleships and unknown objects from the void of space.

Enjoy breathtaking NextGen graphics in 4K in every detail

Designed to take full advantage of the gen9 hardware:

Chorus will be available December 3rd for PS4, PS5, Xbox One, and Xbox Series X.