AI makes you become a master of painter. The second dimension “wife” is at your fingertips. This product of Shanghai University of Science and Technology is popular!

GameLook report/Recently, the “Wife Generator” “WAND”, which ranked fourth on the appointment list with TapTap 9.8 points, will be officially launched on December 30th. This is a digital and film industry incubated by ShanghaiTech University. A product jointly developed by Eye Technology and based on ACM Transactions on Graphics 2021 of Shanghai University of Science and Technology, it can make all users who use it, even those who have no drawing skills, become “magic brush Ma Liang”-in a simple outline Later, a lifelike two-dimensional girl appeared in front of her.

It’s worth mentioning that this product was launched on the Apple App Store as early as August this year. It once ranked first in downloads on the App Store’s graphics and design charts in China. 3D artist Hirokazu Yokohara from Japan also shared himself on Twitter. Get started with the operation video of “WAND”. 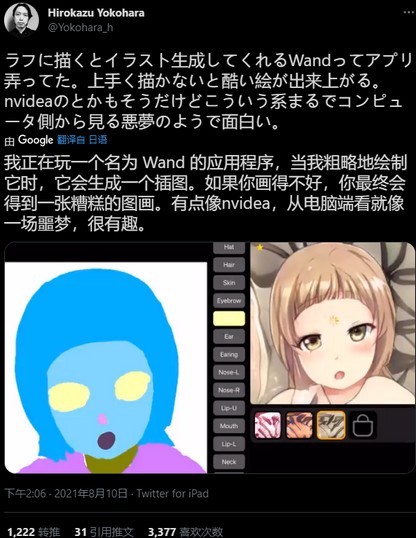 Users who like the second element must be very interested in “WAND”. At the same time, this product has many followers, whether on Weibo or Twitter, and Zhang Qixuan, CTO of Shadow Eye Technology Inc. incubated by Shanghai University of Science and Technology, accepted it. In an interview with CBN, the “WAND” project is a user-led and AI-assisted exploration of “meta universe” imaging technology. It is also the initial contact of the development team in the “two-dimensional style meta universe”.

With little hands, “wife” will have

After opening “WAND”, what is greeted is the minimalist view and operation page. Editable options including hair, eyebrows, eyes, nose, hat, etc. are set in the product. Users can follow their own imagination and aesthetics. To shape the two-dimensional image in your mind, but if you want to make an exquisite “wife”, it is best to have a paintbrush. 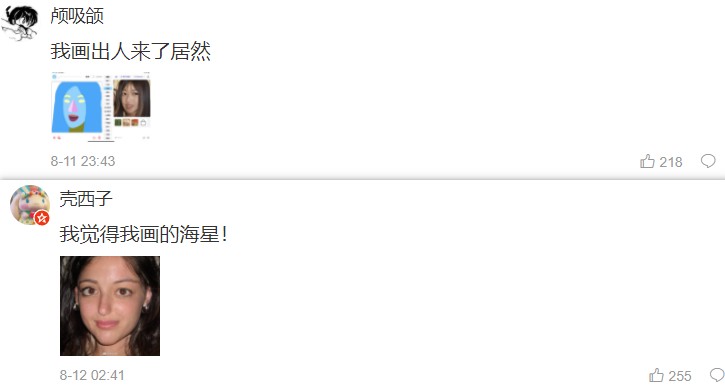 At the same time, the user can also use the two buttons next to the style-photo and photo album. Taking a photo is to choose real-time selfies and take other people’s facial photos. Of course, users can also choose to open the photo album and upload an existing photo or picture here. After that, the system will automatically generate an image for the user by its unique algorithm for the user to continue editing and adjustment.

After the user has finished drawing, he can also change the “style” option to easily obtain a variety of different types of second-dimensional “wives” to avoid the boredom caused by the player’s repeated drawing. At the same time, unpredictable style changes will also Add more mystery to the “WAND” picture. 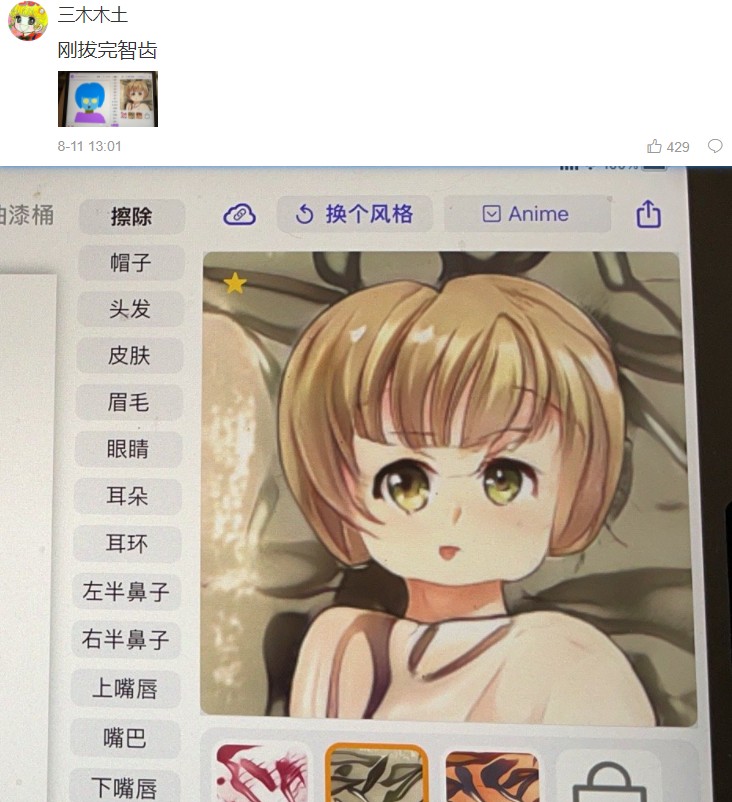 Although the two-dimensional “wife” can visit the world with the fingertips, if you really want to draw the alluring girl with a zero basis, you need to write carefully and draw carefully, otherwise the program effect brought by the “death” It is definitely not inferior to the scene of the car accident. The author can’t help but laugh when looking at the effect of the finished product like “pulling wisdom teeth” in the picture above.

In addition, users who are tired of watching two-dimensional paper people also want to take this opportunity to study three-dimensional humans in depth. Is “WAND” okay? Of course, you can switch to “Realistic” through the “Anime” button next to “Style” to generate the corresponding three-dimensional image: but the shock of the finished product may not be an exclamation and admiration for this technology, but the first time See the extreme panic of other-dimensional creatures, the hairy handstand…

You can be grounded, but please don’t be grounded. A good “wife generator” was just completed by the players as the “Cthulhu generator”, but it’s a joke. The development team has worked hard to improve this part of its function. The so-called “sufficient and unpredictable things,” it is precisely because of this unpredictable occurrence that the “WAND” product attracts more users and players to “appreciate” and try, which once caused a wave of comments on major websites.

Where did they come from?

However, whether it is “Wife Generator” or “Cthulhu Generator”, the characters in the user’s pen will never be born out of nowhere, so where did they come from?

In fact, it is no longer a new thing to use AI to draw or automatically generate characters overseas: As early as last year at the Japanese Game Developers Conference CEDEC2020, Mixi, the developer of “Monster Pinball”, showed off its own creative AI generation game. The role of this technology in the future for productivity improvement and long-term development and operation of the game has been affirmed by the person in charge of Mixi; then in March this year, the Japanese technology company Preferred Networks’ CryPko team posted on the official website Released the AI-generated two-dimensional characters of “Lihui-level”, and in terms of quality, they can compete with the characters in many games.

What, AI will also learn?

Yes, but the detailed explanation is a bit complicated. The author explains with an example here: First of all, we must know that GAN is composed of a generator and a discriminator. We can understand that in a restaurant, one side is a chef who uses random ingredients to cook (generate On the other side is the picky diners who taste the food (the discriminator). The chef’s cooking skills are improved with the continuous cooking, and the tasting ability of the picky diners naturally rises with the improvement of the chef’s skills. At this point, In the mutual growth of the two, a mutually reinforcing cycle of progress was born.

After the program is repeated repeatedly, the level of both the chef (generator) and the diners (discriminator) is already very high at this time, and the final output of the dishes satisfied by the diners is bound to be more realistic. . 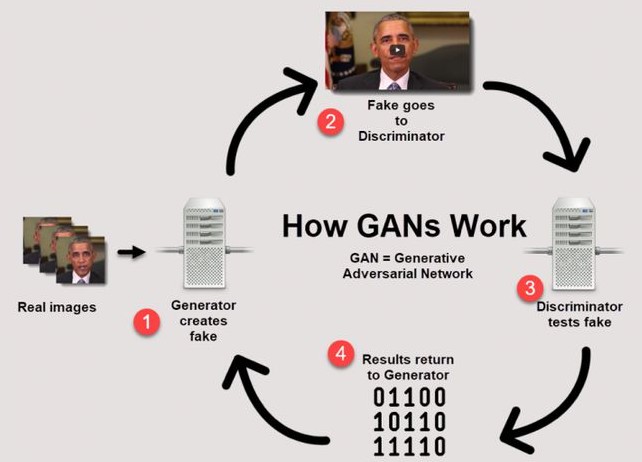 It should be known that GAN is widely used in portraits and image generation, including Douyin’s comic filter, Zeng Dahuo’s “FaceApp”, etc. However, in the process of GAN’s deep learning, the attributes of different content such as shape, texture style, etc., are often It’s not neat-the lotus roots are stuck together like broken threads, which greatly increases the difficulty of explicit control of specific attributes. 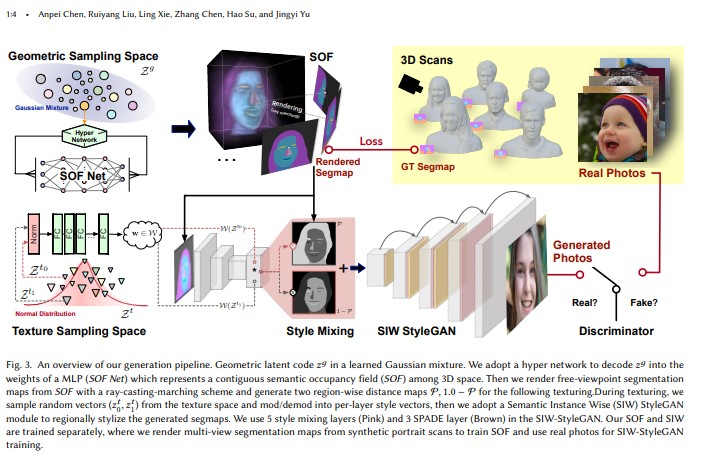 A research paper in ACM Transactions on Graphics 2021 of Shanghai University of Science and Technology proposed an image generator called SofGAN, which decouples the latent space of the portrait into two subspaces: geometric space and texture space, and then in some way make one Generate 3D geometric figures of portraits, and the other generates textures. It can be seen that this method solves the problem of adhesion of GAN attributes.

“The design concept of “WAND” is derived from the latest research results of the Computing Vision Group of Shanghai University of Science and Technology.” According to Zhang Qixuan, a member of the development team and a 2018 undergraduate student of the School of Information of Shanghai University of Science and Technology, a large number of experiments have proved that this method can generate independent , High-precision portrait images with controllable geometry and texture properties coexist, and various applications can “get along well” with them, such as the generation of facial animations with consistent appearance, and so on. “WAND” is the product of continuous research and experimentation by the students.

With the increasing advancement of AI technology, many industries and even creative industries such as writing and composition may usher in a major change in the future. Art, as a typical creative field, is an extremely creative field that contains the personal emotions and thoughts of the creators. The subjective industry can be described as an insurmountable mountain for cold AI, but the emergence of AI deep learning technology makes the future constructed by “user-oriented, AI-assisted” with unlimited possibilities.

What is “User-oriented, AI-assisted”? In fact, “WAND” is a good example: as a kind of tool-based software, it does not produce content by itself, but as users continue to work on it, more and more rich and interesting things will continue to be produced. At that time, the UGC model will flourish in the continuous interaction between users and AI, but at the same time, how to control the quality of content, how to use users to create value instead of consuming value, and how to restrain promotion will be important. Was constantly enlarged. 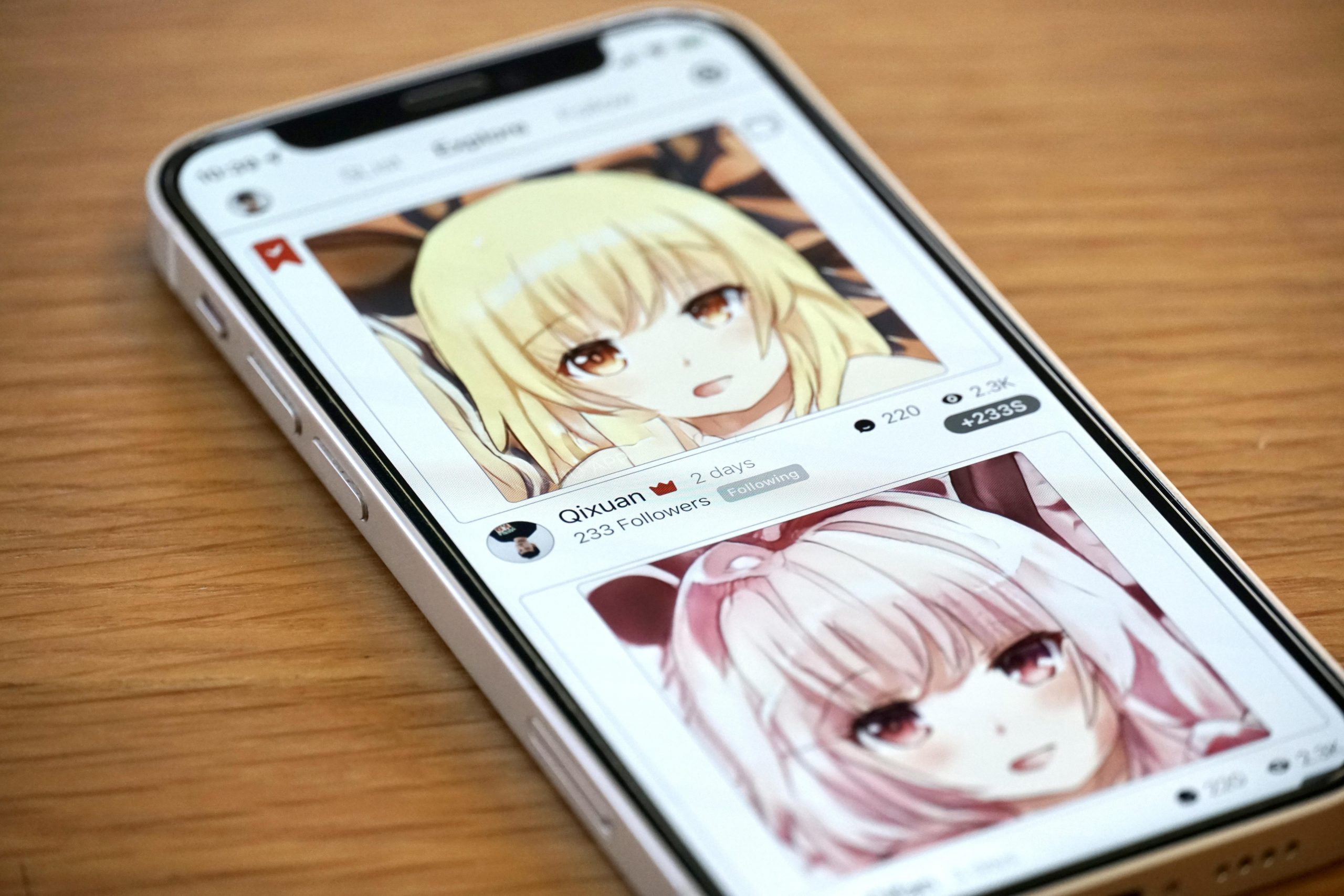 The current meta-universe boom brings not only new spatial forms and game modes, but also an upgrade to user interaction methods. UGC may become the most important content producer in the meta-universe. The birth of “WAND” can be seen The work is an exploration of the meta-universe image generation technology. We will rely on UGC to continuously obtain new content as the core, and use image generation technology to create a lifelike dynamic image to assist users to better present themselves. After these two steps, we will still What new technologies and concepts will emerge to pave the way for the times is yet to be known, but the only certainty is that we are step by step and firmly marching towards the dream of “oasis” that shines in everyone’s hearts.