What is Wordle? The word game everyone plays – rules explained

A wonderfully simple daily online puzzle that involves guessing the correct five-letter word has got everyone talking. Have you played Wordle yet? Here are the rules of the viral sensation explained.

Wordle is a brain teaser where players must work out a five-letter word in up to six guesses.

While solving the puzzle gives you a kick of excitement, players cannot spend hours on the game because you can only play Wordle once a day.

The game has gone viral with celebrities including Richard Osman of Pointless among those who take to Twitter to show off their stats.

If you’re confused by people tweeting a grid of white, yellow, and green square emojis, they share their Wordle score.

READ MORE: Samsung is giving away free Disney+ to customers, here’s how you get it

What is Wordle and how do you play? (Image: Getty/Wordle)

So this morning almost crushing defeat snatched from the jaws of instant victory.

Since everyone guesses the same five-letter word, there’s a competitive element to showing how many times it took you to get it right.

So, what are Wordle’s rules and how do you play?

You can play Wordle online here.

Wordle is free to play and there is a new puzzle every day. 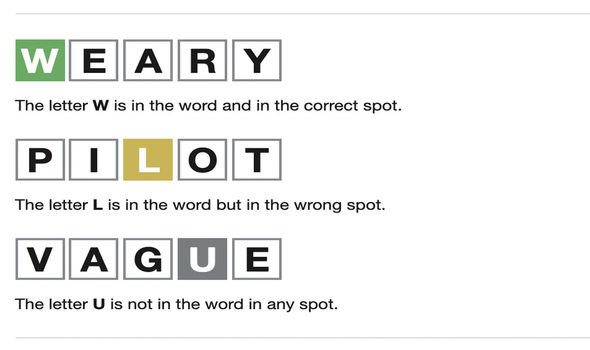 The rules are very simple: you get six chances to guess the five-letter word.

To start, you have to guess a random five letter word.

When you guess a word, the letter tiles appear in one of three colors.

If the letter tile is gray, it will not appear in the word you guess.

Added a share button to Wordle that generates a spoiler-free emoji grid for you. Shoutout to @irihapeta for coming up with such a cool way to share your results every day.

If the letter tile turns yellow, it’s in the word you’re trying to spell, but you’ve put it in the wrong place.

If the letter tile is green, it appears in the word and is in the correct place.

So on your next guess, you can keep your green letters, rearrange your yellow ones and add new letters to get to the solution.

You can define your own Wordle tactics – for example, some people have a “lucky” five letter word to start with and use the same thing every day, while others try a different starting word every time they play.

The simplicity of the game is part of its viral appeal, but if you really want to challenge yourself, you can turn on ‘Hard Mode’.

Wordle was originally launched in October 2021 and started gaining popularity when the easy-to-share feature was added on December 16.

The game was designed by Josh Wardle, an engineer for the popular online forum Reddit.

Give Wordle a try – it only takes a few minutes and is a fun way to test your brain without the risk of putting off the game for hours.

The new PlayStation Now games for January 2022 are here!