The placement of the track is hot, what do popular Korean products look like?Raising ninjas, making cat soup, pixel style, open your brain

GameLook report/As far as topicality is concerned, there are not many people who have been able to wrestle with the “metaverse” in the game circle in the past year, but mobile games must be one of them. Although it is not a new thing, the needs of players are like a historical cycle. After the explosion of liver and krypton, the placement of Buddhist mobile games will usher in another concentrated outbreak in 2021.

In addition to “One Mind”, which has killed all directions in the Chinese mainland market, mobile games such as “Idle Girl” and “Live Wild Ball” on the best-selling list in the Japanese market have also been on the list for a long time. Previously, GameLook also reported on a number of popular mobile games in Hong Kong and Taiwan.

Now, the spring breeze of idle mobile games has finally blown to the Korean market, which has always liked to lock players in front of the screen. In the past year’s Korean list, there have been several representative popular mobile games. Among the many explosive games, mobile games with diverse styles, rich themes, and casual gameplay have also become a rare clear stream in the Korean game market. Below, GameLook will briefly introduce three of these Korean idle games with their own characteristics.

As you can see from the straightforward game name, “Idle Ninja” is an idle game with the theme of ninja fighting. This game, which was launched in March last year, did not forget to check the popularity of “Naruto” in the promotional image. The game character’s iconic blond orange coat and ninja forehead are naturally reminiscent of “Naruto”. The male protagonist Uzumaki Naruto.

However, the game content and gameplay basically have nothing to do with “Naruto”. As a standard idle game, the core gameplay of automatically fighting monsters to upgrade and accumulate materials is naturally the main content of this game. Although the battle process is completely automatic, in addition to conventional equipment and skills, this game also has consumable designs such as blood bottles, which also makes players need to go online from time to time to confirm whether they need to “restock”. 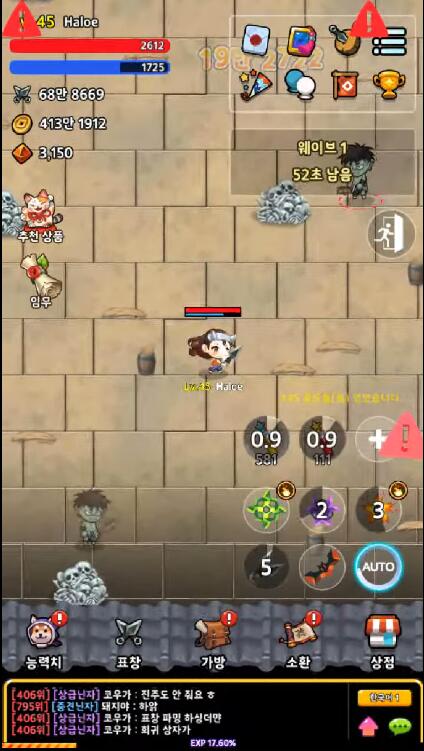 The art style is one of the main selling points of this game. Compared with advertising monetization games, “Idle Ninja” undoubtedly has a stronger sense of refinement. Although the Q-version vertical painting is used to enter the battle screen, each character still has a normal proportion of high-quality commercial vertical painting. In terms of UI, it is packaged in a European and American cartoon style with rich colors, which does not give people a negative impression of cheapness. 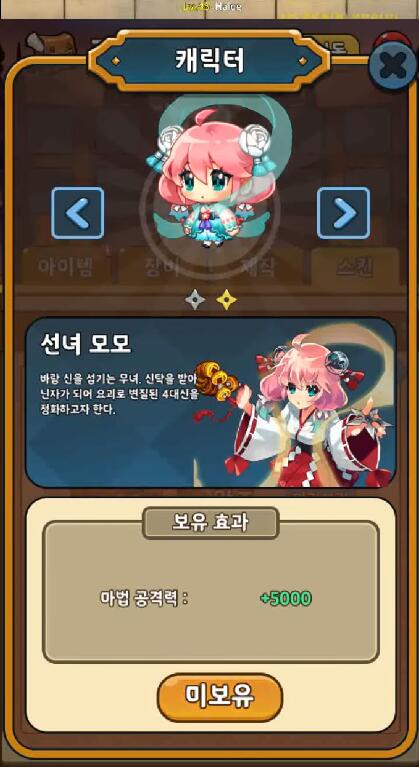 Of course, just like the Korean MMO that wants to lock players in front of the screen, “Idle Ninja” also has two “killers” that increase user stickiness. One is the PvP system that makes people quite high. If you are tired of watching the on-hook animation of the protagonist beating the little monster, you may as well enjoy an exciting duel between two “Naruto” throwing darts at each other in the PvP system. 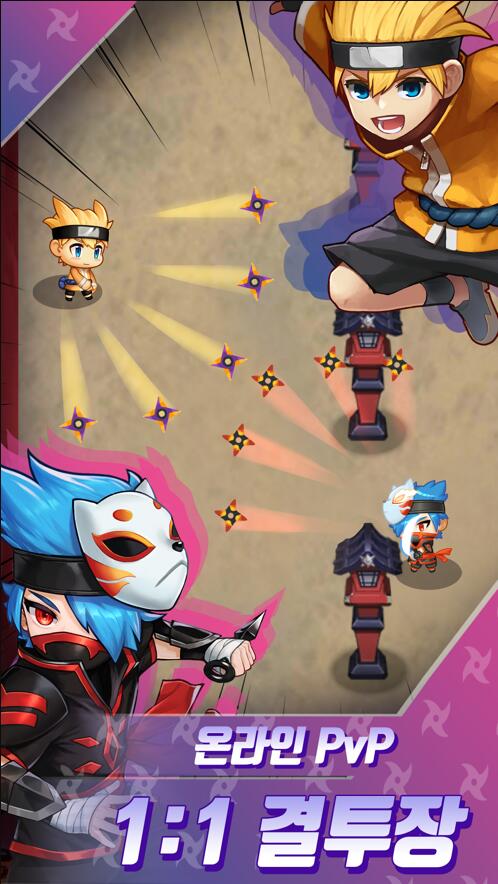 And the other is the secret that really makes this game hot in the Korean market – P2E (Play to Earn). For players who want to earn digital tokens, the game offers a daily quest system. You can complete up to 5 daily tasks every day, and each task can be rewarded with 300 NINKY coins. After completing a series of tedious registration procedures, players can withdraw after 48 hours, and pay 1000 NINKY coins as a withdrawal fee, and then there is a 72-hour limit for withdrawing again.

The cumbersome withdrawal mechanism and relatively empty content made this game a hot topic in South Korea, but the Google Play score was only 2.7 points, and the ranking on the Korean App Store free list has also dropped to more than 260. It seems that the gimmick of P2E is not enough to become a long-term way of placing mobile games.

From the score of 4.8 on Google Play, it can be seen that “Cat and Soup” is undoubtedly a word-of-mouth mobile game in Korea this year. This game has chosen an animal theme that is suitable for all ages. From music to painting style, it is full of healing, allowing players to enjoy the tranquility brought by this digital forest without any burden. 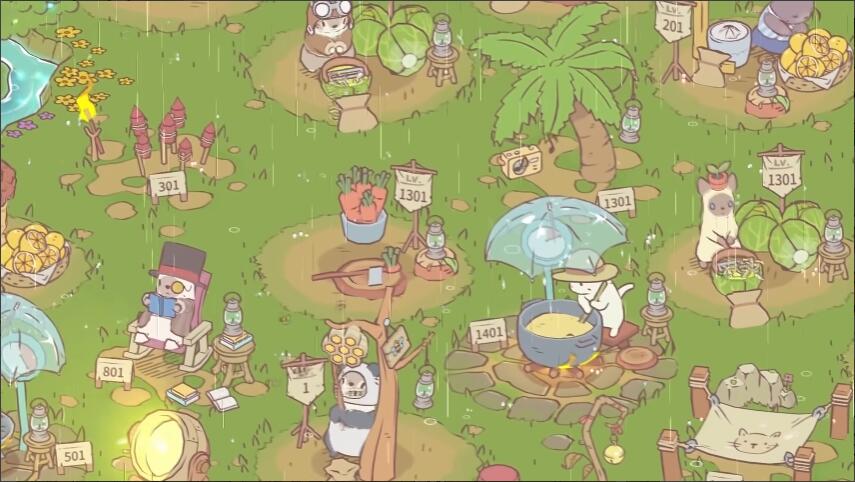 The mechanism of this game is very simple. The cat in the center of the screen will continue to make soup, and when the clock above its head turns a full circle, soup will be displayed in the item bar at the bottom of the screen. Click to sell it for gold coins. Gold coins can be used to upgrade buildings in the forest, and new buildings will also bring new animal companions. They will gather ingredients, upgrade recipes, or otherwise help soup-making cats make more valuable soups. What players need to do is to constantly sell soup, build or upgrade buildings, and make this forest more lively and harmonious. 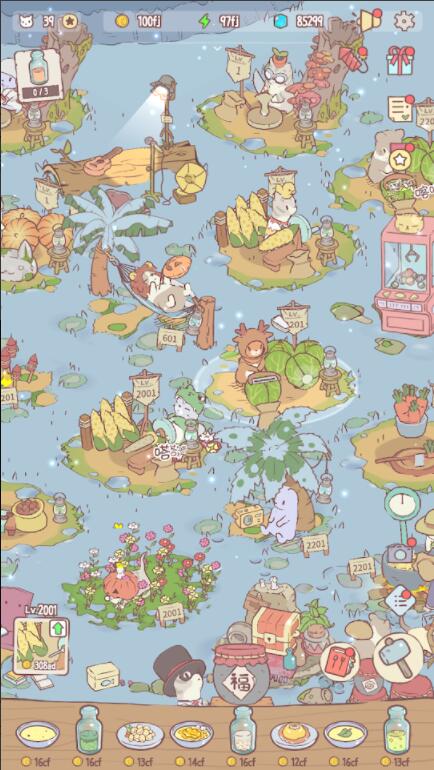 The extremely simple mechanism of healing also makes this game not have many krypton gold points, so this game cannot be seen on the top-selling list of games in the Korean App Store. But this does not prevent its extremely high reputation and popularity. In particular, this game also natively supports Chinese very friendly, and many Chinese players have also left long comments on Google Play, sharing game strategies and skills, which are very loving.

As the price of not forcing krypton, this game also adopts the method of advertising monetization. Watching video advertisements can effectively speed up the game progress, which has also caused many players to complain about the game experience. However, in general, the fresh gameplay of “Cat and Soup” is still favored by players, and its hand-painted style can not help but remind people of the popular “Traveling Frog” in 2017.

In terms of data, the performance of this game is also quite dazzling. Within 1 month of its launch, it has received more than 1.5 million global downloads, and the number of daily active users has exceeded 600,000. Just 5 months after its launch, the cumulative downloads worldwide exceeded 10 million. In addition, this game was also rated as the 2021 Google Play Independent Game TOP3, and its downloads in Japan, South Korea, the United States and other markets are firmly in the forefront of the casual simulation category.

It is worth mentioning that HIDEA, the developer of this game, has a great background. The company has received a capital injection of up to 20 billion won (about 106 million yuan) from Neowiz, which is the developer of the well-known “Cross Fire”. From large-scale end games to mobile games, the adjustment of Neowiz’s investment direction also reflects the changes in the Korean and even global game market. 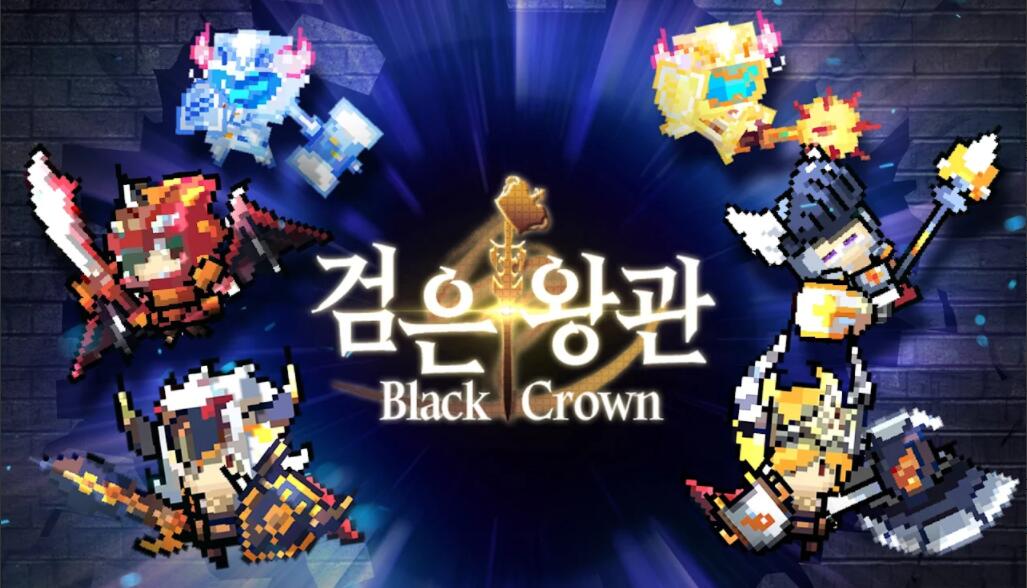 From the content point of view, this game also has many characteristics of royal RPG games: the protagonist, as a righteous hero, accumulates experience in actual combat step by step from a rookie, and constantly kills stronger and more evil enemies. And Doudouyan’s pixel villain also allows senior RPG players to quickly flash through countless classic RPG works of the 1980s and 1990s in their minds.

This pixel-style idle RPG game is similar to “Idle Ninja” in the core mechanism, and basically the game is developed around the upgrade of monsters. However, unlike most mobile games that use characters as their selling points, including “Idle Ninja”, “Black Crown” does not have a character extraction system, and players need to extract equipment. In addition to bringing attribute gains, equipment will also directly change the appearance of the protagonist, which can be regarded as another way to solve the boring feeling that may be caused by the lack of new characters. 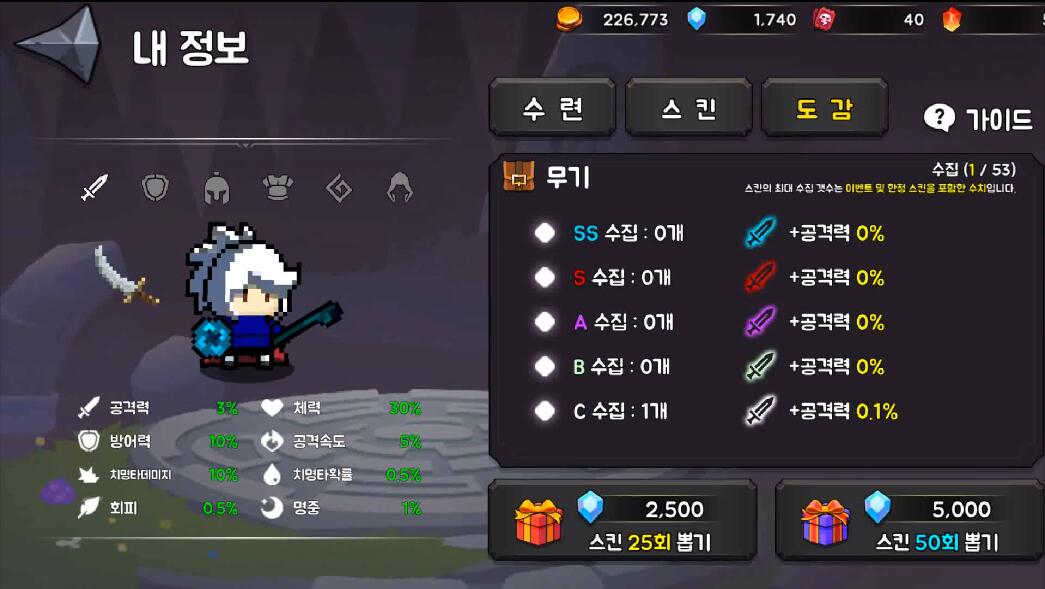 The reason GameLook calls this game a “heavyweight” product is partly because it also uses the complex numerical model that Korean MMOs have been criticized for.

For example, this more complicated UI design is to cover up the various check-in, task, and treasure chest systems that require players to click a lot. For various tokens such as gold coins and diamonds, and the resulting dazzling variety of gift packages in the store, players need to carefully calculate which ones are more cost-effective, which also provides a lot of convenience for the game’s krypton gold point implantation. As a result, this game ranks a bit higher on the App Store bestseller list than both of the aforementioned games. 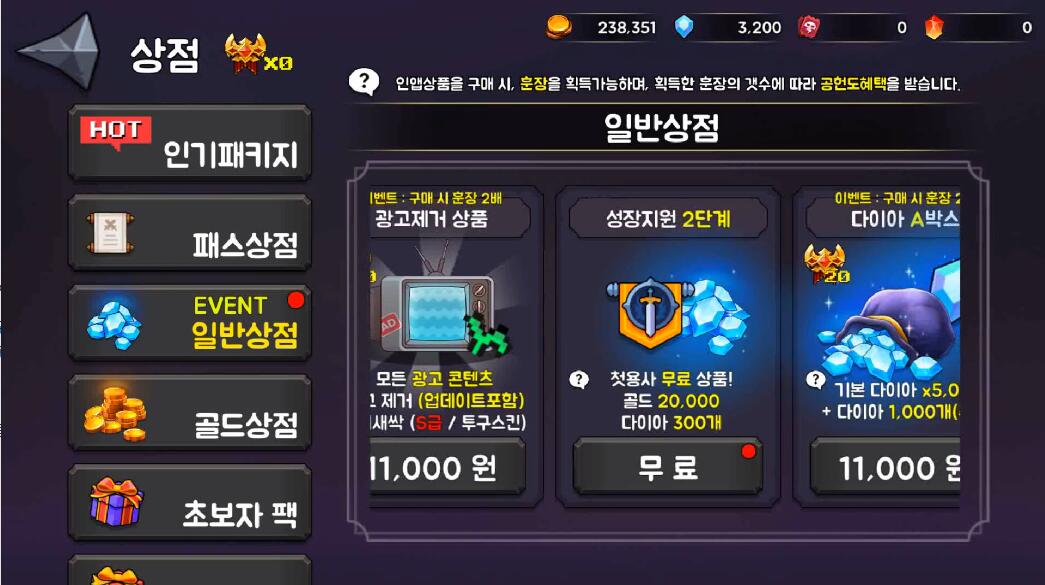 Of course, in other respects, this game is also very close to the idle version of the Korean MMO mobile game. For example, the task system of the main interface and the experience bar design at the bottom of the screen make MMO players feel more intimate. In order to motivate the kryptonites to increase their efforts, “Black Crown” has also joined the ladder ranking system. If you want to be on the list, you will naturally have to invest in real money. 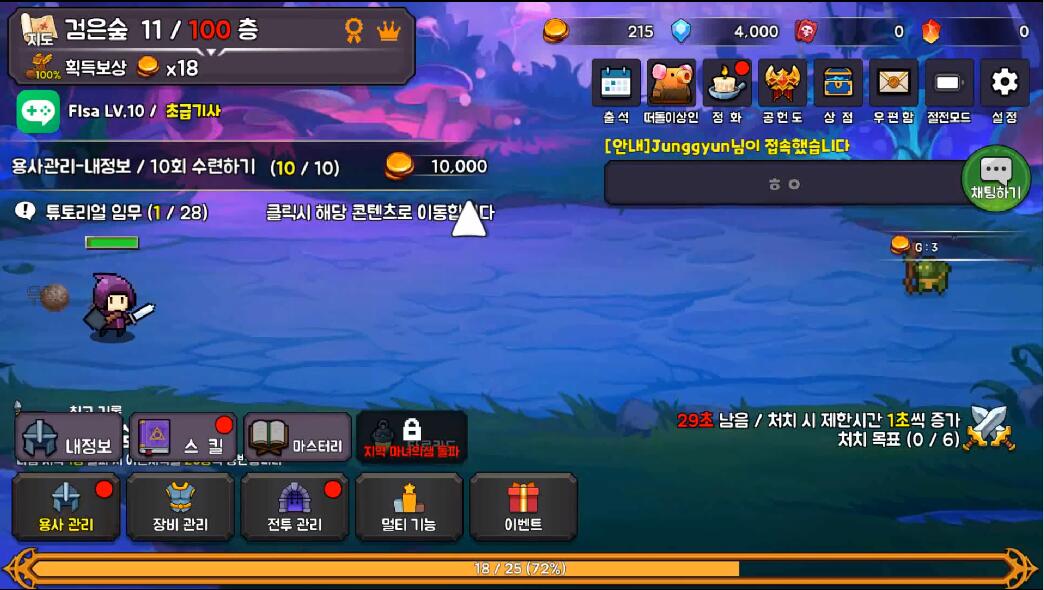 Although this game has been online for more than three months, on the eve of New Year’s Day, with the new version update, it once again topped the Korean App Store free list, which seems to indicate that Korean players still have a soft spot for heavier RPG gameplay.

Xbox News: Get Ready for the Mushroom Wars 2 Competitive Scene