“Seven Heroes Contest”, which was popular all over the Internet back then, was released as a mobile game, but the publisher is still it?

With the development of smartphones, our entertainment choices have become more and more diversified, and mobile games have ushered in a wave of rapid development with good wind. Even though the development of the mobile game industry has slowed down in recent years, it is still a treasure to be unearthed. The rich game categories such as SLG and RPG are dazzling. According to the “2022 China Game Industry Trend and Potential Analysis Report” released by Gamma Data, the compound annual growth rate of the SLG head market has exceeded 25% in recent years. In 2021, the size of the SLG head market will increase to nearly 20 billion, nearly doubling from 2017.

With its keen market sense, Wanwan games, which have been deeply involved in the legendary field, have also tapped the huge potential of SLG games. They have assembled the original team of the “Seven Heroes Battle” page game, which took two years to build and launched the classic IP “Seven Heroes Contest”. Seven Heroes Battle for Hegemony mobile game. On January 10, the launch day of “Seven Heroes Contest” channel, as the first SLG exclusive product of Ganwan Games, “Seven Heroes Contest” handed over a satisfactory answer sheet, and it has won in major app stores such as vivo, oppo and Huawei. It has achieved better results, which also confirms the accurate analysis of the SLG market by Wanwan Games. This is a key step for Wanwan to enter the SLG market, and it is also the beginning of the development of multi-category and diversified tracks. 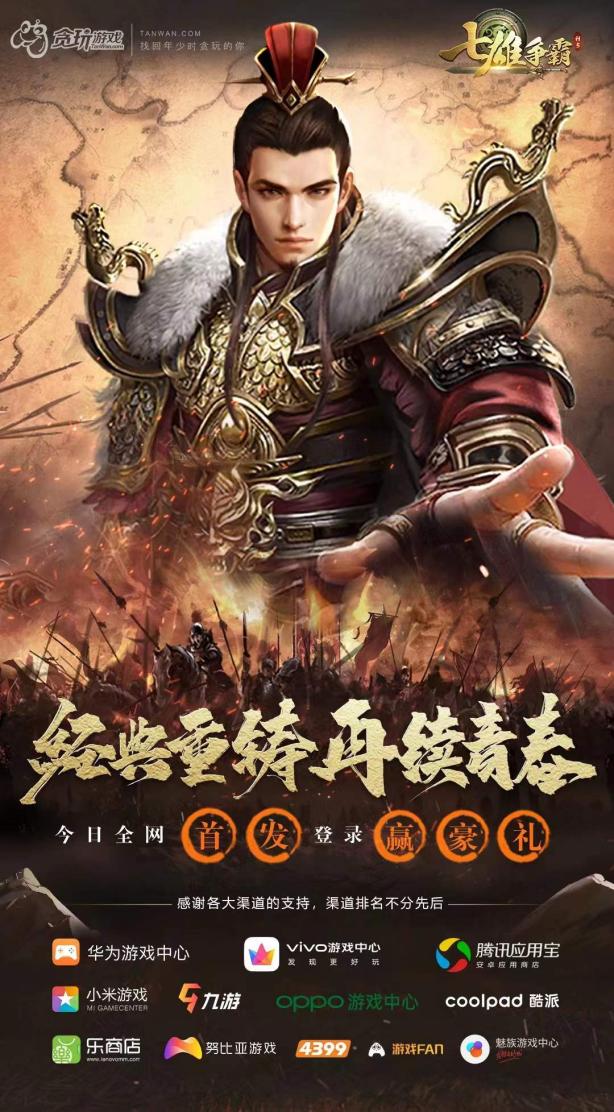 “Seven Heroes Contest” is an SLG game that continues the new generation of war strategy with the background of the Warring States Period. The core gameplay is based on the essence of the Seven Heroes Contest webpage and mobile games, and joins the battle for hegemony, the Central Plains, the hegemony, and the cross-server expedition. , Gold Mine Competition, Kyushu Hegemony and other characteristic innovative gameplays, small can unify the country to become the king of a country; medium can unify all countries to become a generation of hegemons; can defeat each server and become the emperor of one server. The rich development system combined with the comprehensive and systematic commercial design can capture the attention of players at all stages and effectively ensure the next-day retention rate. 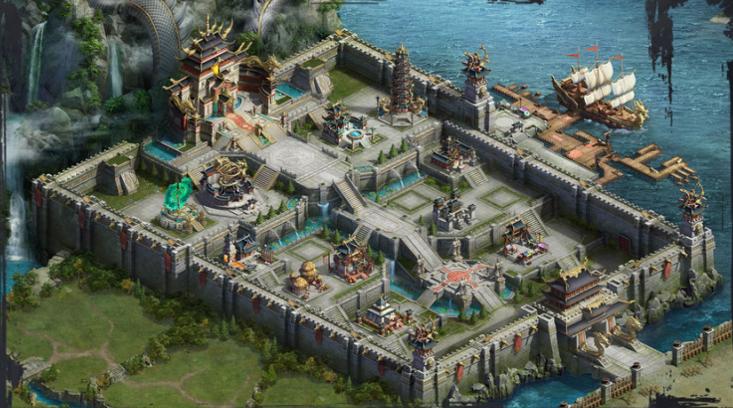 In terms of the theme, “Seven Heroes Contest” avoids the “Three Kingdoms” background of the flooded market, and focuses on the Warring States period, which is the same as the Three Kingdoms period, which is full of turbulent and turbulent, rich and legendary characters. The historical allusions that are still sung to this day , Exquisite graphics and near-real strategy simulation make “Seven Heroes Contest” a sudden emergence and become a dazzling dark horse on the battlefield filled with smoke of SLG game products.

The “Seven Heroes Contest” page game has been operating for 11 years and still maintains a monthly turnover of more than 3 million. Looking back at the development of China’s web games, we can understand the excellence of “Seven Heroes”. After the budding exploration period of 2007-2008, web games began to flourish in 2009. Various web game development companies and web games have sprung up. 2010 was the year when SLG games dominated web games. In one year, in addition to “Seven Heroes Contest”, SLG page games such as “Warring States” and “Contempt of the World” were born one after another, competing for the market together.

However, the page game market is changing, and no one can dominate the mainstream forever. After 2011, ARPG games and end-to-end page games began to counterattack. After 2013, the mobile game market rose, and page game players were diluted. The SLG web game in the same period as “Seven Heroes” has gradually disappeared or declined, but “Seven Heroes” is still recognized by players and constantly mentioned by the industry, which is commendable.

In fact, in view of the characteristics of no download, quick registration, and low exit cost of web games, the life cycle of web games is often not long, even less than a few months. There are very few web games that have a life cycle of more than 1 year and can maintain a good income. And a case like “Seven Heroes Contest” that has a life cycle of 11 years and is still in good operation is undoubtedly a miracle standing in the page game industry.

As the CEO of the research and development company of “Seven Heroes” said: “Every new product we will launch next will take the Seven Heroes as a model, do a long-term approach, carry out comprehensive innovation in themes and content, optimize and intensively cultivate, and maximize the number of users. Viscosity and recognition of the product to win the market.” 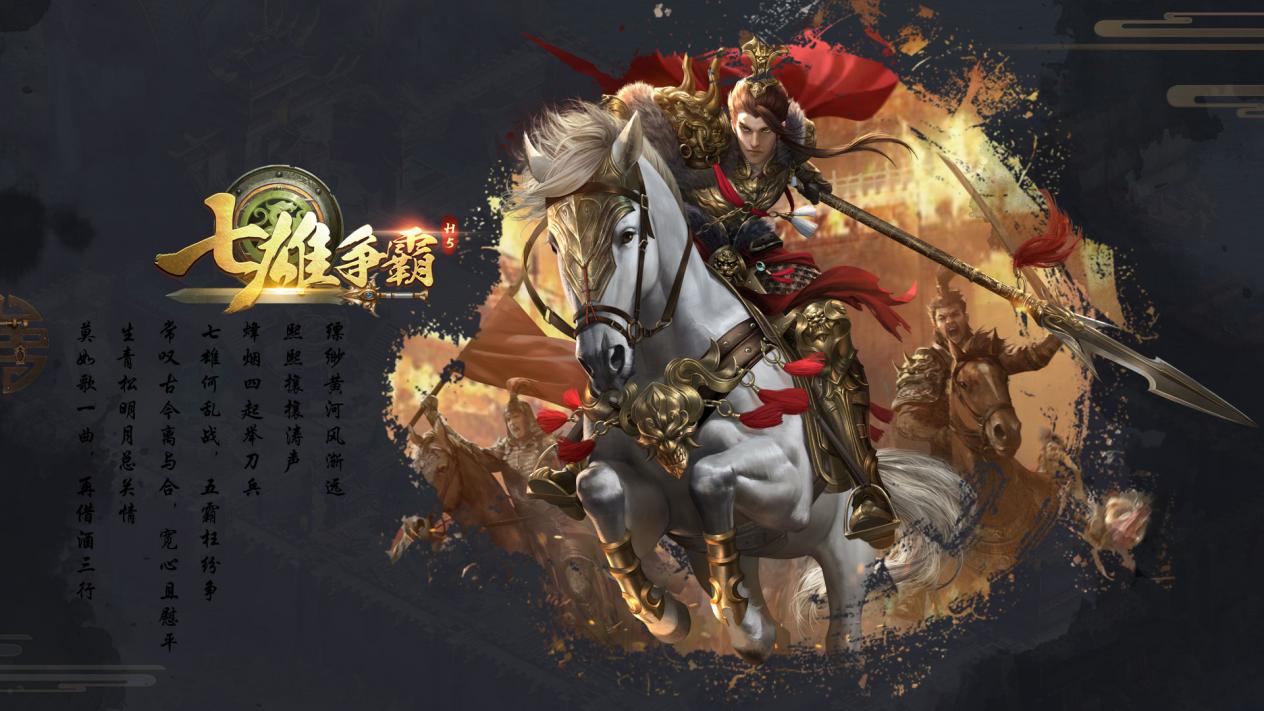 In fact, compared to the surprise brought by “Seven Heroes” itself, it is even more surprising to players that this new product actually comes from the “Big Brother Game” publisher Ganwan Games.

In the impression of many players, the greedy game that created the online jokes such as “If you are a brother, kill me” and “Slag Zhahui” has always been a leader in the promotion and distribution of the legendary category, but few people know about the legend. Extravagant games. Today, the legendary publisher is no longer content to lead in just one track.

Previously, Ganwan Games revealed to us that it will launch more categories of games this year, not only in the legendary category, but also in SLG, miracle, card, simulation management, women-oriented and other multi-category games, and try to be in more fields. flowering.

This is not a whim, and the trend of change in the game has long been foreshadowed. It is not difficult to find that from 2019 and “The Wandering Earth” launched the video game linkage 2.0, began to radiate to the general public circle; by 2020, Feng Xiaogang’s film-level TVC will be launched, rewriting the stereotype of game endorsement advertisements; and by the end of 21, three companies in the Greater Bay Area will be invited. The brothers also joined hands with the Douyin platform to create content marketing, once again breaking the shackles of the pure purchase model and so on. In the transformation again and again, the greedy game has no longer stopped at the “old routine”, and its sincerity in seeking change is evident. 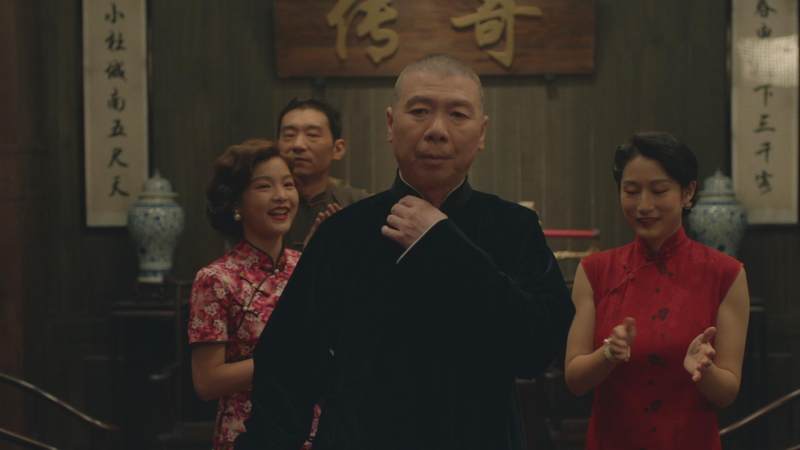 It can be seen that, adhering to the beautiful vision of “finding you who was playful when you were young”, Playful Games has paid more and more attention to integrating with more players in recent years. This is not only reflected in its diversified marketing model, but also in its product layout. It is not difficult to understand that the launch of the mobile game “Seven Heroes”, the first SLG exclusive product of Tanwan, is undoubtedly an important step in the future product matrix of Tanwan.

In our view, there are obviously deeper considerations behind this. It is undeniable that the emergence of “Seven Heroes” is of course the choice to seize the popular track SLG. But more is that, compared with other popular categories such as two-dimensional and female, SLG is more similar to legendary games. Since most of the users of the two are adult men, and they are all large-scale products, Wanwan Games chose to use this as a springboard to cut into more categories, which naturally greatly reduced the predicament of acclimatization.

Of course, Ganwan Games itself has a lot of advantages in terms of game marketing. Based on the publishing experience of past legendary games, Ganwan Games has built a mature product promotion system. It is no exaggeration to say that under the mature operation mode, it is not only a legend, but Wanwan Games treats each product with sincerity. This can also bring enough confidence to the partners in more external cooperation.

In addition, Ganwan Games has keenly captured the trend of cross-platform games. The impressive performance of a number of cross-platform games last year is obvious to all, and it is also mentioned in the “2021 Game Market Weather Vane Report” released by Unity that 96% of developers said that cross-platform multiplayer online will be successful in the next two years. The essential.

From this point of view, “Seven Heroes Contest”, which was developed by the original team of Page Games for more than two years, stood in the air of “three-terminal intercommunication” early. Strong IP will also continue to shine on the SLG mobile game track, which also shows the forward-looking of the game, and also makes the peers look forward to the new multi-track products in the future. 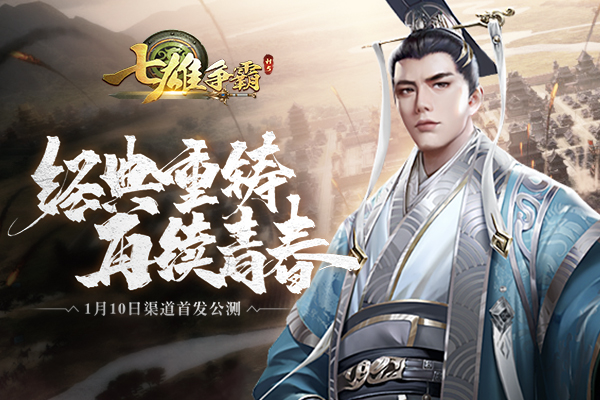 As the first release of the multi-category layout of greedy games, the mobile game “Seven Heroes Contest”, which plays the role of “vanguard”, is a perfect continuation of the “Seven Heroes Contest” page game in terms of theme, quality and gameplay. Classic, with the operation concept of “content is king, users first”, it attracts countless loyal players.

More importantly, in today’s market where purchase volume is gradually becoming the mainstream, the greedy games that stand out from the legendary track with many big factories are undoubtedly more competitive in terms of purchase volume promotion. Thanks to the deep game publishing experience, can the greedy game, which is no longer limited to the “legendary company” status, be deeply cultivated in more categories such as SLG, and continue to bring more surprises to the whole industry? In our opinion, its subsequent performance is definitely worth the wait.