Kirby and the Forgotten Land the start date has been set 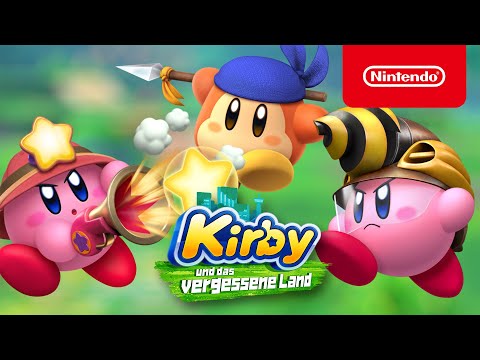 Nintendo is rolling up their sleeves and donated to us not only a new trailer (see above) and some new information via a press release (see below), but also the start date of Kirby and the Forgotten Land: Starting March 25, the rosy hero rushes into an openworld adventure.

Kirby is back! In the 3D platformer Kirby and the Forgotten Land the cute hero has an exciting adventure. His journey of wonder, wilderness and Waddle Dees begins on March 25 on the consoles of the Nintendo SwitchFamily. The new trailer on Nintendo’s official Germanlanguage YouTube channel shows impressions of the game.

Also on his new mission, Kirby is gaining many skills and he needs them more than ever. Because after being stranded in a mysterious, unknown land, he must discover that the friends Waddle Dees have been kidnapped en masse by the evil pack of beasts. During the ensuing rescue mission, he receives support from the curious Elfilin, who meets him in this new world.

Together with Kirby, the players wander through a mysterious world in which nature overruns the remains of a bygone civilization. Numerous platformer challenges await them in the different parts of the forgotten land. To fight opponents and navigate the living 3D worlds, they can use a variety of Kirby’s skills. At the end of each level you must free the Waddle Dees who were held captive. So to save as many as possible, you have to explore every corner thoroughly.

The pack of animals presents the players with a real challenge. Fortunately, in addition to his classic skills, Kirby has also added new copying skills to his repertoire: the drill and the explorer skills. Drilling allows him to penetrate the ground and attack his opponents from below with one mighty blow. And when Kirby uses the Discovery ability, his opponents will see stars even more. Because with her, he can target her from a great distance.

Kirby doesn’t have to face these and other dangers alone. As a Waddle Dee assistant, a second Nintendo SwitchGuide the spherical hero’s fan and use a variety of attacks with his spear. To play together, two adventurers can simply share the JoyCon of a console inside.

In Kirby and the Forgotten Land the players also get to know the Waddle Dee town, which serves as the central starting point for the adventure. Depending on the number of rescued Waddle Dees, it continues to develop and gradually wakes up from its deep sleep. Shops are opening and if you feel like it, you can experience some of the city dwellers’ favorite games. Kirby is even asked to help out at the Waddle Dee Café. The happier the guests are, the more points they can collect. The Waddle Dee Scholar can also be found in town. He helps the Kirby fans with valuable tips.

Officially .. WhatsApp works without the Internet