The latest data from the Sensor Tower store intelligence platform shows that the revenue and downloads of Chinese mobile game products in overseas markets in December 2021. The detailed list changes are as follows.

The overseas revenue of Mihayou’s “Yuan Shen” mobile terminal exceeded 96 million US dollars, ranking first in the overseas mobile game revenue list. It is worth noting that with the release of Yunjin and other characters in version 2.4 on January 4th, while “Yuan Shen” spread the treasures of Chinese culture overseas, the income also ushered in another wave of peaks.

Thanks to the launch of the 11th season in mid-December, the revenue of “Call of Duty Mobile” increased by 15.4% month-on-month, returning to the top three in the revenue list. Since its listing in October 2019, the total overseas revenue of this mobile game masterpiece jointly launched by Tencent Tianmei Studio and Activision Blizzard has exceeded 1.3 billion US dollars.

Since its listing at the end of 2020, Sanqi Interactive Entertainment’s “Puzzles & Survival” revenue has grown steadily. Driven by the anniversary of the Japanese server and Christmas activities, it reached a new daily high on December 24. In this issue, the game’s revenue increased by 10% month-on-month, ranking 6th on the list. 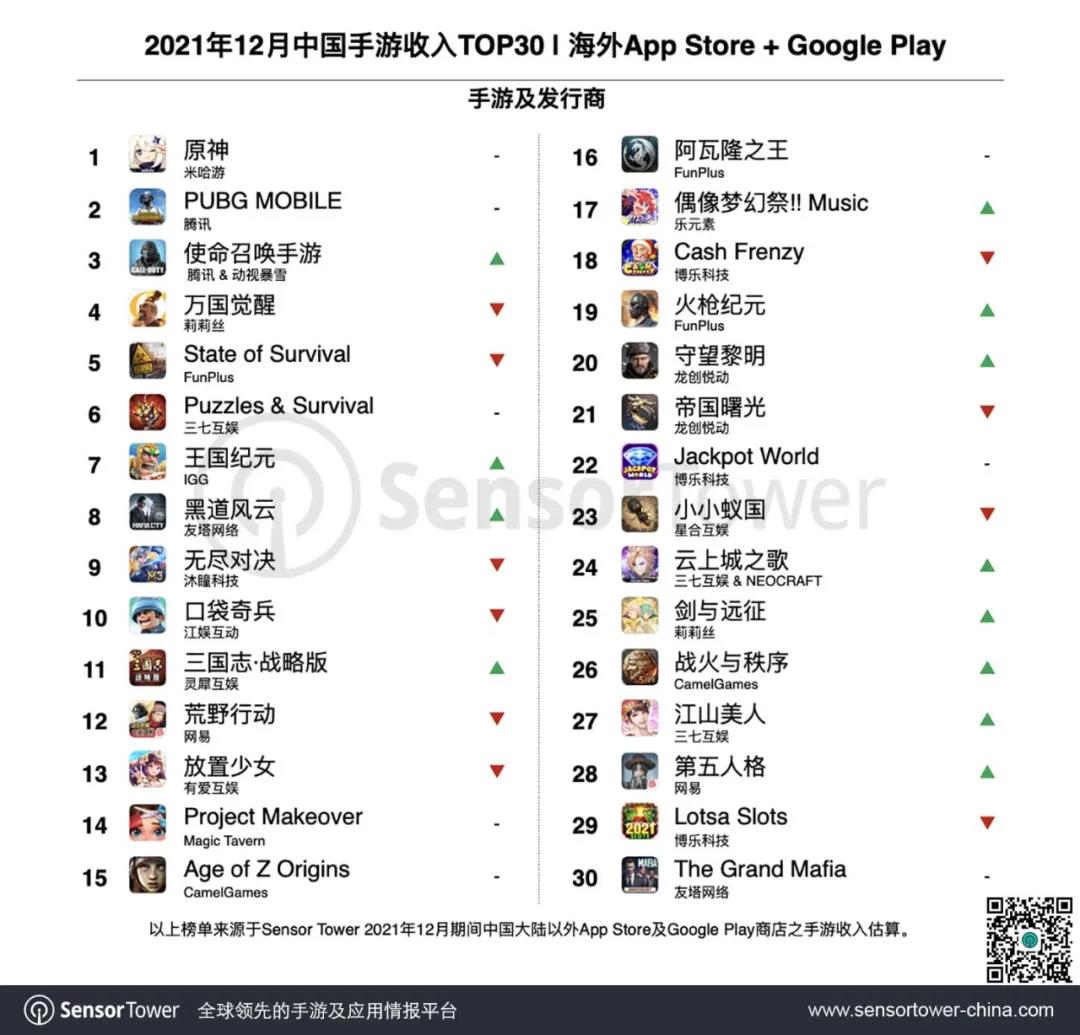 New Year’s Day and New Year’s Day are the most important festivals in Japan, and in-game promotions are held, which have a particularly significant effect on revenue. In this issue, Lingxi Interactive Entertainment’s “Three Kingdoms: Strategic Edition” and Music Elements “Idol Dream Festival!! Music” both set new daily records on the occasion of resigning from the old and welcoming the new, with monthly revenue increasing by 9.7% and 27.5% month-on-month respectively.

Although it has not yet landed in the Japanese and Korean markets, the current revenue of the underworld-themed SLG mobile game “The Grand Mafia” by Youta Games increased by 8% month-on-month, reaching a new high.

The English version “Figure Fantasy” of “High-level Figure Fantasy” landed in the European and American markets in late November. In December, the game’s revenue increased by more than 5 million US dollars, ranking third on the growth list. At present, this unique and creative two-dimensional mobile game has completed the layout of key overseas markets. The current revenue from the United States accounts for 28.7% of the total overseas revenue, South Korea and Japan account for 22% and 17% respectively, and the Southeast Asian market accounts for about 8.6%. .

NetEase’s SLG new game “The Lord of the Rings: War” in December revenue increased by 49% month-on-month, ranking 7th on the growth list, and 33rd on the overseas mobile game revenue list. With the strong appeal of the “Lord of the Rings” IP and the research and development strength of NetEase’s mobile games, the game is becoming another well-known overseas IP-adapted mobile game masterpiece. 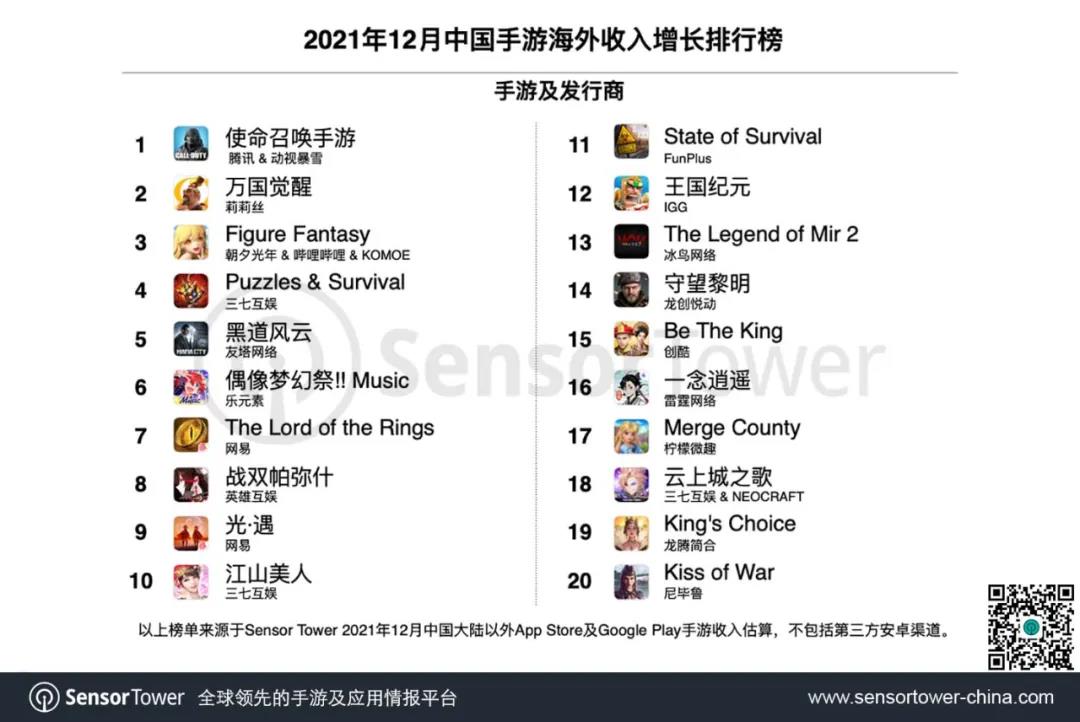 During the Christmas period, “War Double Pamish” held an anniversary event and NieR linkage in the Japanese market. This period’s overseas revenue increased by 118% month-on-month, ranking 8th on the growth list.

“Merge County”, a synthetic mobile game owned by Lemon Weiqu, was launched overseas at the end of November, and entered the 17th place in the revenue growth rankings in this issue. Synthetic mobile games have always been an evergreen category overseas. “Merge County” also adopts the classic European and American town simulation theme. Players can intuitively feel the sense of accomplishment of upgrading by merging items in the town. At present, the game’s revenue is in a fast-rising channel, and it is expected to become another synthetic mobile game that successfully goes overseas.

Adaric Music’s mobile game “Piano Fire” has surged to 10 million downloads, landing at No. 2 on the air chart.

The beauty casual mobile game “Makeup Master”, which was shortlisted in the last issue, increased by 91.5% in downloads, ranking third on the list.

The product that made the list for the first time is the flowerplasn casual game “2048 Cube Winner”. 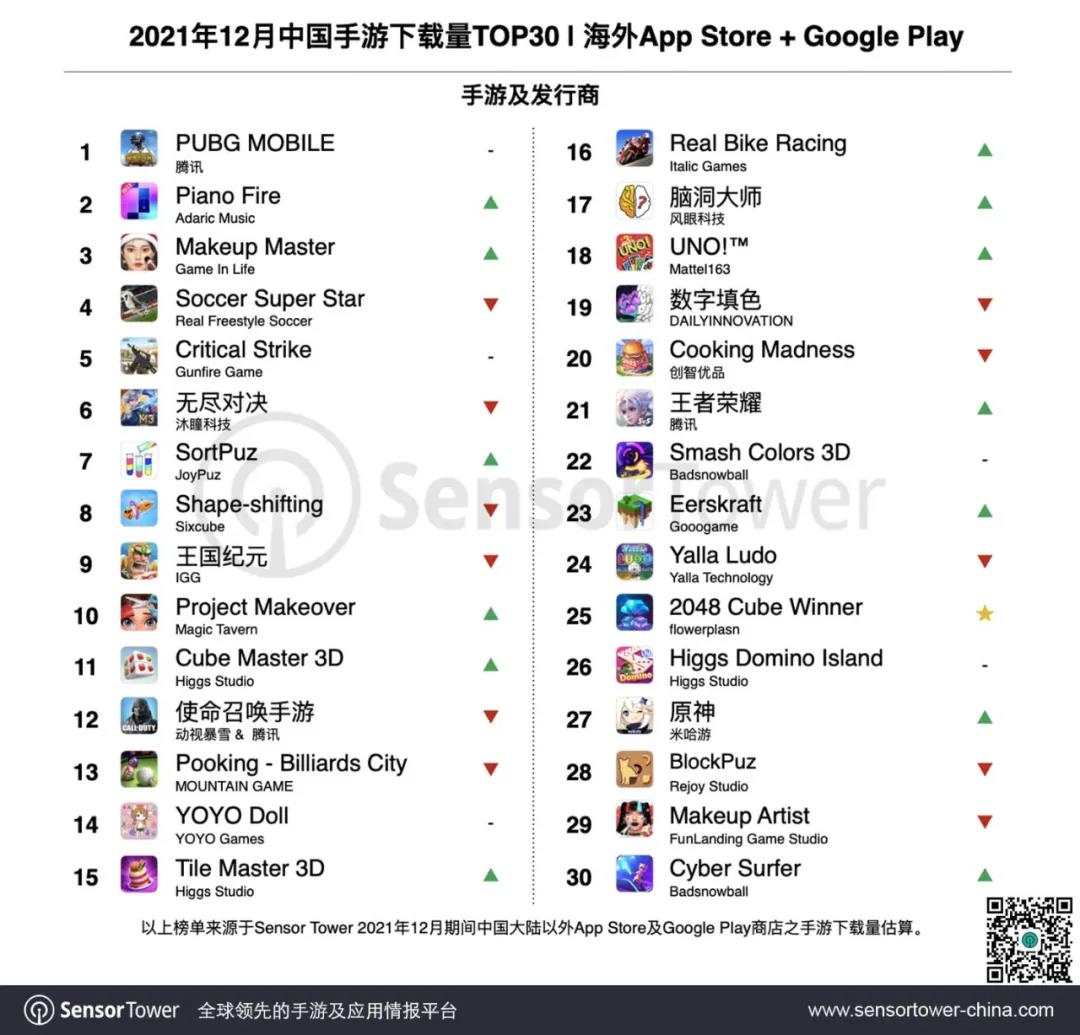