How to debut as a virtual anchor? It is feasible to start a business with zero yuan and invest millions, and these sharp tools are still needed!

GameLook Report / In recent years, the popularity of virtual anchors (VTuber) has been obvious to all.

In China, Chen Rui, CEO of Station B, mentioned in his speech on the 12th anniversary of Station B that in the past year, a total of 32,412 virtual anchors have started broadcasting at Station B, a year-on-year increase of 40%; the related broadcast volume has increased by 70%; The increase in the number of live broadcast barrage interactions has doubled directly.

According to the latest statistics from Playboard, a professional Youtube data collection website, in the 2021 VTuber award list, Runyu Lucia (Runyu るしあ) topped the list with nearly 200 million yen (equivalent to RMB 10.69 million). , which caused netizens to exclaim, “It’s actually more profitable than a real person.”

In addition, in the past two years, the scale of revenue generated by virtual anchors has also shown a trend of doubling: the original revenue in 2019 was only 10 million yen, and in 2020, it directly doubled or even five times. In 2021, the revenue generation of virtual anchors will still maintain steady growth.

In this wave of fashion that is quietly blowing, there are not only the boost of new concepts such as the Metaverse, but also the projection of the interests of Generation Z. But in any case, the explosion of the virtual anchor field has become a fact, and it has objectively spawned the virtual anchor dream of many people or companies.

So, it’s time to rediscover this somewhat magical and futuristic new thing.

Outrageous, a virtual image is as high as millions

To become a virtual anchor, two elements are inseparable: one is an avatar with iconic characteristics, and the other is the real “people in the middle” behind the avatar.

However, unlike real anchors, the influence of real people in virtual anchors is not great, but the virtual image is the key to attracting audiences. This means that on the way to becoming a virtual anchor, the design of the character image is often the most basic and one of the most important aspects to consider.

At present, the design for avatars on the market already has a large market size, and the price of each image design is not low. Take Live2D, which is often used by personal anchors, as an example. If you want to ask an artist to design a better Live2D avatar, the market price is usually 3,000-5,000 yuan. 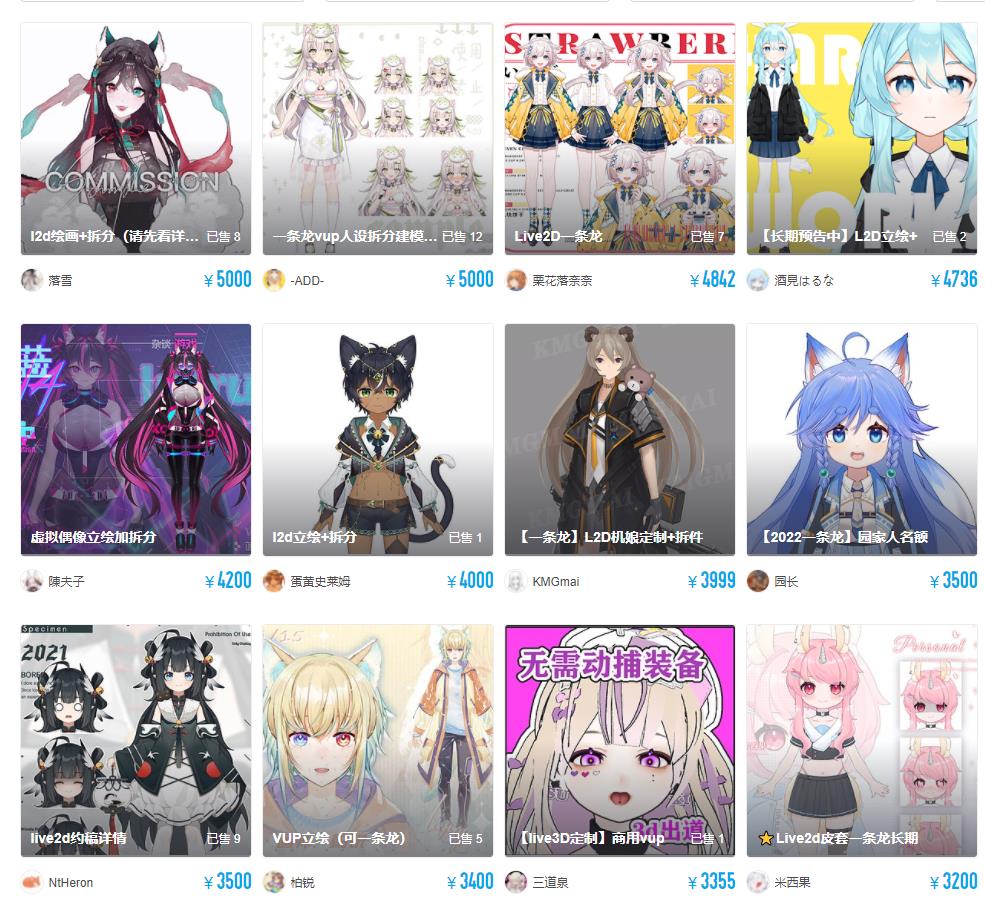 It is worth mentioning that this price is only the price of purchasing an avatar – which usually only includes the simple actions and character settings of the character. If you want to have more complex expressions and a more in-depth character background, you need to ask an artist for further design, which naturally involves a lot of expenses, and the final price usually soars to tens of thousands of yuan.

If the avatar price of the above personal potential is acceptable, then the image cost of corporate potential may be a bit “outrageous”.

Because the virtual characters are cultivated and treated as idols, the investment in the design of virtual anchor characters is actually not less than that of star brokerage companies in the entertainment industry, and what they use is not simple Live2D, but more complex Live3D .

On Zhihu, some netizens pointed out that the biggest expenditure of avatars is actually modeling, including exquisite 3D skeletons, large model faces, etc. For example, Liu Yexi, a hyper-realistic virtual anchor/idol who gained more than one million followers overnight on Douyin, costs between 800,000 and 1,000,000.

In addition, the design and production cost of the 3D model of Asoul, a virtual girl group under ByteDance, far exceeds that of most Vtuber at home and abroad, and many details, such as mouth shape and other parts, have been specially designed. The optimization and processing make the characters more vivid during the live broadcast; even the virtual scenes around the live broadcast will cost a lot of money to build.

Although such detail optimization may not have obvious feelings in a short period of time, in the long run, it tends to widen the gap with the general Live2D virtual anchors. Coupled with the promotion of the team, it will eventually stand out.

The avatar is only the first step to become a virtual anchor, and to make the virtual anchor move, it is natural to have facial capture and full-body motion capture equipment, as well as matching virtual live broadcast software.

Generally speaking, due to limited funds, the video capture devices used by the virtual hosts of personal potential are usually ordinary cameras or mobile phones. Therefore, the corresponding virtual live broadcast software is relatively lightweight, such as VTmini, which is chosen by most of the anchors of station B.

The biggest advantage of TVmini is its strong compatibility and facial capture that can be achieved through the camera of the mobile phone – you only need to connect the mobile phone to the software and import the model, you can control the facial expressions of the character in real time, including the opening and closing of the mouth .

In addition, if you really don’t want to spend money to customize the image, but just want to play live, the software can also provide the import of existing 2D3D models. Players only need to pinch out the virtual image they want on the existing basic model. image, you can start broadcasting at almost zero cost.

Of course, if you want to make the entire avatar move, you can also use some civilian-level motion capture equipment, such as Microsoft’s Kinect, or Leap’s Leap Motion, to achieve motion capture. Although it can only achieve some simple actions, it is enough to meet the daily live broadcast needs. The important thing is that the whole set of equipment only costs about 1,000 yuan. 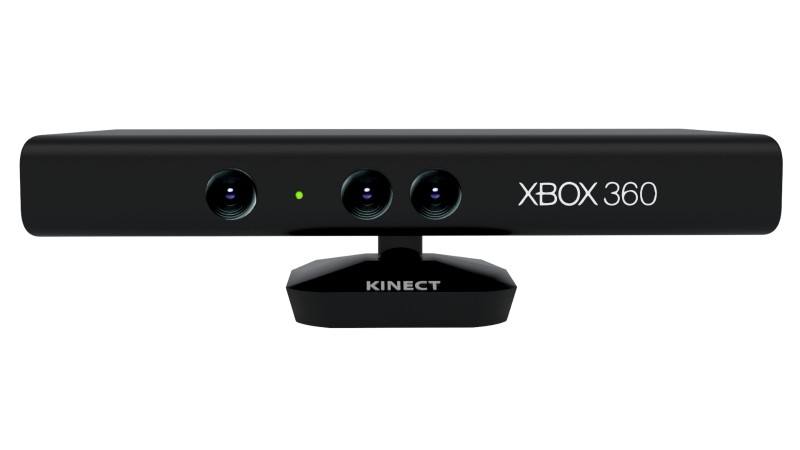 But it should also be admitted that kryptonite always exists objectively. With sufficient budget, you can also use more advanced surface capture and motion capture equipment to achieve better live broadcast effects. For example, for the face, you can use Vicon’s camera, or the Face Ware head-mounted camera. These professional-grade cameras can better enrich the facial expressions of the characters. 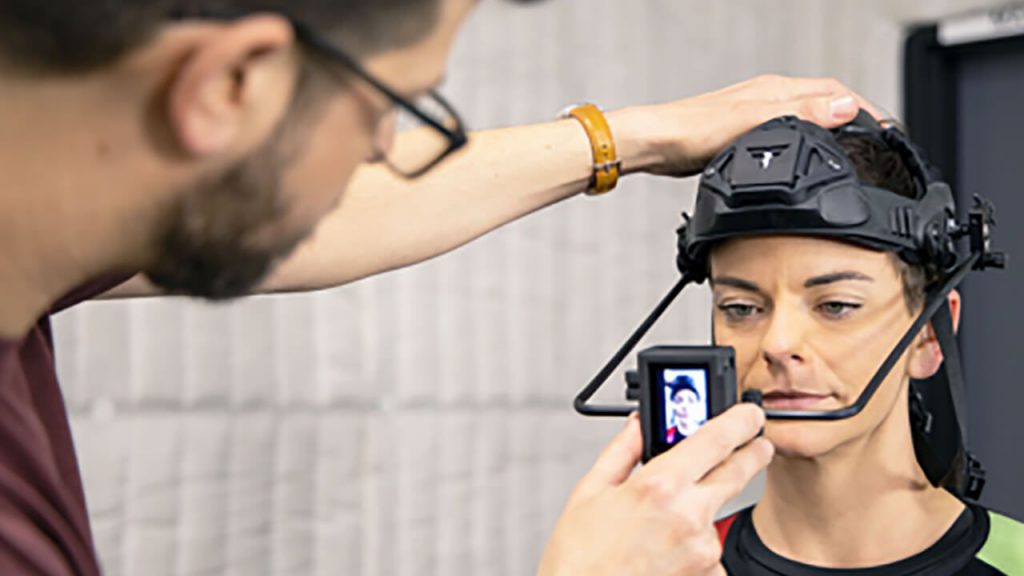 The most commonly used motion capture equipment, such as virtual power, Noiton and other inertial motion capture, can provide high-precision motion capture, and with the corresponding virtual anchor system, it can achieve low-latency real-time driving effects. But in terms of price, it may be in the tens of thousands, or even more than 200,000.

Wait, don’t think this price is the ceiling in the field of virtual anchors. In fact, the cost of the virtual live broadcast of the enterprise situation is much higher than you think.

In order to present the best effect, most of the virtual anchors of enterprises need more accurate matching equipment when they broadcast live. Stage-level performances often use tool software such as Virtual Talents or VTPlus, with optical motion capture equipment such as Qingtong and OptiTrack, to achieve higher precision motion capture requirements.

For example, last year’s 2021 BML (Bilibili theme offline meeting), Luo Tianyi’s performance at the opening used VTPlus, as well as a series of expensive surface capture and motion capture equipment. You can intuitively see that Luo Tianyi’s overall movements are very diverse and complex, no different from real people, and in terms of details, such as the slight swing of the skirt, they are also well presented, which can be described as meticulous.

It is worth mentioning that optical motion capture devices such as Qingtong and OptiTrack are not separate objects that can be used at any time, but a complete system that requires a fixed venue to operate, and the software it adapts to is also more complex and choosy. The cost of this type of system is very high, and it is more than one million yuan.

Therefore, although the current virtual anchor market is very hot, it is still not saturated. But for start-up teams, to enter this field, it really needs a lot of money. For personal virtual anchors, although the cost is lower, under the influence of the Matthew effect, how many streams can be allocated is another matter.

Virtual anchor, is it a pig in the air?

In recent years, there has been a visible growth in the number of virtual anchors. Nowadays, you can almost find virtual anchors on Douyin, Station B, and even traditional TV stations.

There are many reasons for stimulating the growth of virtual anchors. From the perspective of the broader market, the relatively low costs of live broadcast equipment, virtual tools, and images described above are naturally one of the reasons. However, the gain of virtual images in psychological and live broadcast effects may be the key to market growth.

In terms of psychology, the virtual image makes the “people in the middle” behind them no longer need to show their true colors, and puts down the psychological burden in public situations. The effect is to drive more people to join the ranks of virtual anchors. As for the live broadcast effect, the two-dimensional elements of the avatar itself are also likely to have a positive psychological perception on the audience, and make the people in the middle more free to live broadcast, thereby bringing better live broadcast effects.

In addition, compared with real anchors, virtual anchors have higher recognition and longer life cycle, will not be troubled by young growth, and the image will not easily collapse. But objectively speaking, the current virtual anchors are still a little immature. For example, the personal business only stays in live broadcast, while the corporate situation only has more aspects such as music and brand endorsements, and the limitations of time and space are also very obvious.

Considering the high cost of the above business alone, coupled with the expenses of communication and marketing, it can be said that its high production and operating costs have rapidly raised the threshold for entry in the past few years.

It is worth mentioning that the Matthew effect in this field is also becoming more prominent. Head anchors have a relatively fixed fan base and have obvious advantages in communication channels and attributes. To a certain extent, they accelerate the accumulation of IP traffic and help cash back. The anchors at the waist and tail are slightly weak, and their products are mainly used in live broadcast, e-commerce and other scenarios.

The reason why the virtual host is broadcast to e-commerce is because the brand is only to improve work efficiency and reduce labor costs, and these IPs with low copyright value not only achieve the purpose of saving costs, but also cater to the trend of virtual people. The only person who may be injured is the virtual anchor.

Because once such a fate is planned, it will be really difficult to break the circle on a larger scale in the future.

Alone in the Dark Remake presented for PS5 & XSX