Due to the unprecedented success of the previous game “Ancient Tree Melody DEEMO” in the global market, it has gained a large number of fans, and it coincides with the 10th anniversary of the founding of developer Rayark Games, so this game is also known as the 10th anniversary commemorative work. It has attracted a lot of players since then. Before the launch, the number of reservations on the official website of the game had already exceeded one million, and the number of reservations on TapTap was also as high as 780,000, and the score was as high as 9.9 points.

On the first day of the game’s launch, the game lived up to expectations and quickly appeared at the top of the iOS free list in many countries and regions. For example, it successfully topped the Japanese free list, and it was also in the Top 5 in South Korea, Hong Kong, and Taiwan.

Due to factors such as high barriers to entry, audio games have always been a relatively niche category, but a completely different scene has appeared in the product “Ancient Tree Melody DEEMO”. It broke the barriers between the circles and became popular all over the world. Even in Makoto Shinkai’s movie “Your Name”, some careful players discovered that the game “DEEMO” was installed on the male protagonist’s mobile phone.

Music is the best way to convey emotions to players, and it is for this reason that the integration of performance and narrative also makes the emotions of the characters in the story more realistic, which is one of the reasons why “DEEMO” makes people linger.

So, just in time for the tenth anniversary of the establishment of Rhea, in this new sequel, what kind of surprise has Rhea brought to players this time?

On a rainy day, music and adventure go together

As an orthodox sequel after nearly six years, “Flower Rain Melody” has not completely copied the settings of the previous work, but has ushered in a comprehensive innovation.

For example, in the game, Deemo will still appear, but the appearance has undergone tremendous changes, from black to white. According to the official statement, the new image of Deemo not only fits the new world view, but also has two generations of games and two versions. The Deemo also corresponds to the black and white keys in the piano, symbolizing the piano elements that the series has always adhered to. The world view background of “Flower Rain Melody” is set in a fantasy country where “rain of the void” is falling at any time. As long as it is rained on things, white petals will grow and eventually disappear, so the creatures living in this place can only Take shelter from the rain at a station out of the rain.

However, after the heroine Echo played by the player met Deemo, a miracle happened. When Deemo played the piano in the station, the sun cut through the sky, and the whole station was no longer affected by rain. In the game, players need to do The key is to play a piece of music and communicate with people in this world to find the truth behind “Rain of the Void”. 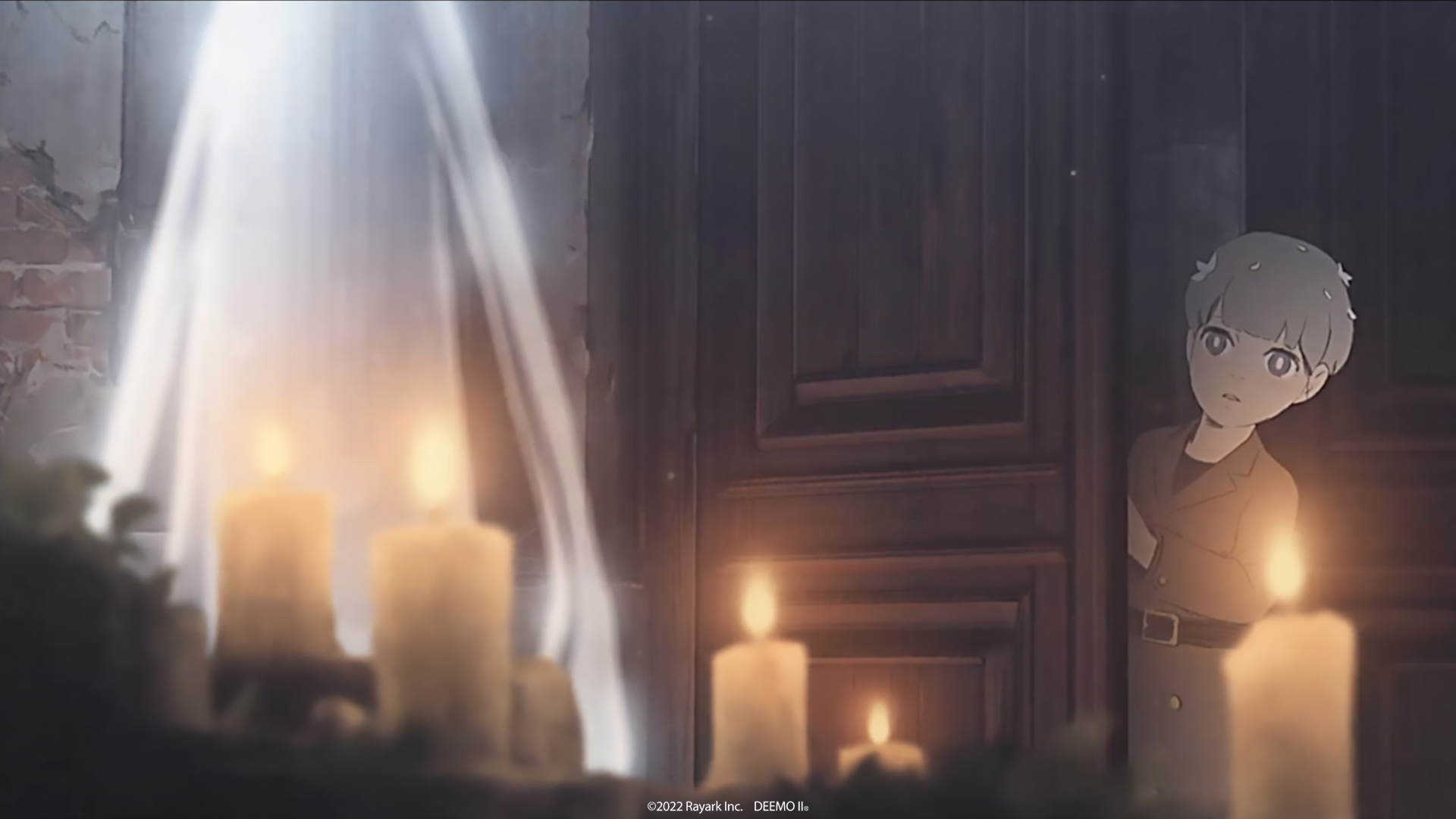 You read that right, the heroine

As a sequel, every improvement in “Flower Rain Melody” compared to the previous one can be seen with the naked eye, and the most intuitive is the picture. In the new work, the art style of the game has been upgraded to a 3D hand-painted style, and a large number of detailed elements and light and shadow effects have been added.

For example, many Japanese-style billboards are integrated into the British-style buildings. Although we are in a wonderful country, the official hopes to use these fireworks elements to shorten the distance with the players, thereby adding immersion to the game. feel. 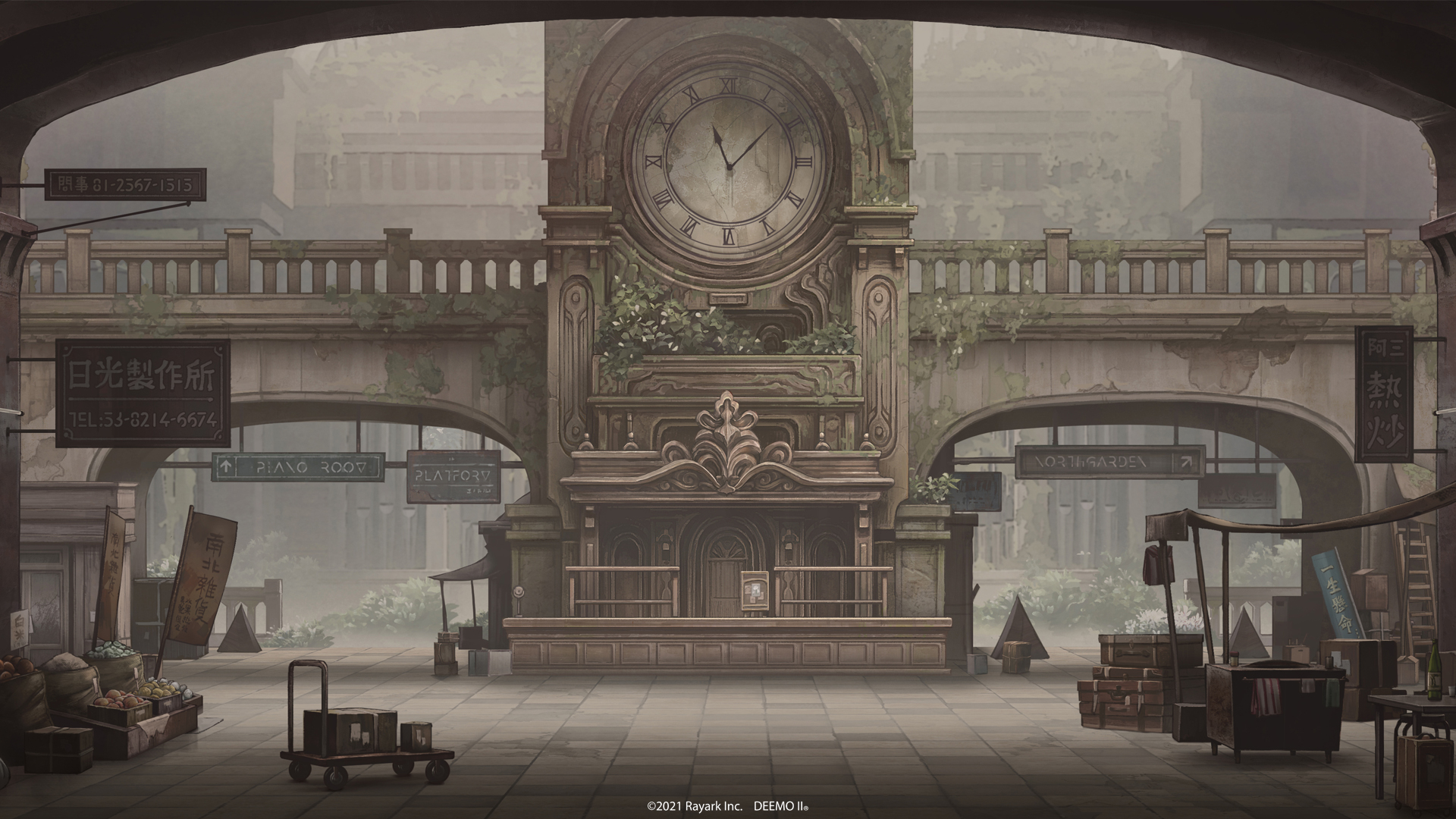 Delicate game screen, fantasy city is not the only selling point of the game, as the so-called good horse with a good saddle, on this basis, the game has also added a large number of movie-level performances and cutscenes, so that every occurrence in this country Everything is more vivid and real.

In addition, in the previous work “DEEMO”, the story mainly revolved around the little girl and Deemo, and in “Flower Rain Melody”, in order to further make this city and this country more real, the official will put the game in the game. There are more than 50 characters appearing, and each character has its own story and character. Different events and places have conversations with them, and the responses they get are also different. 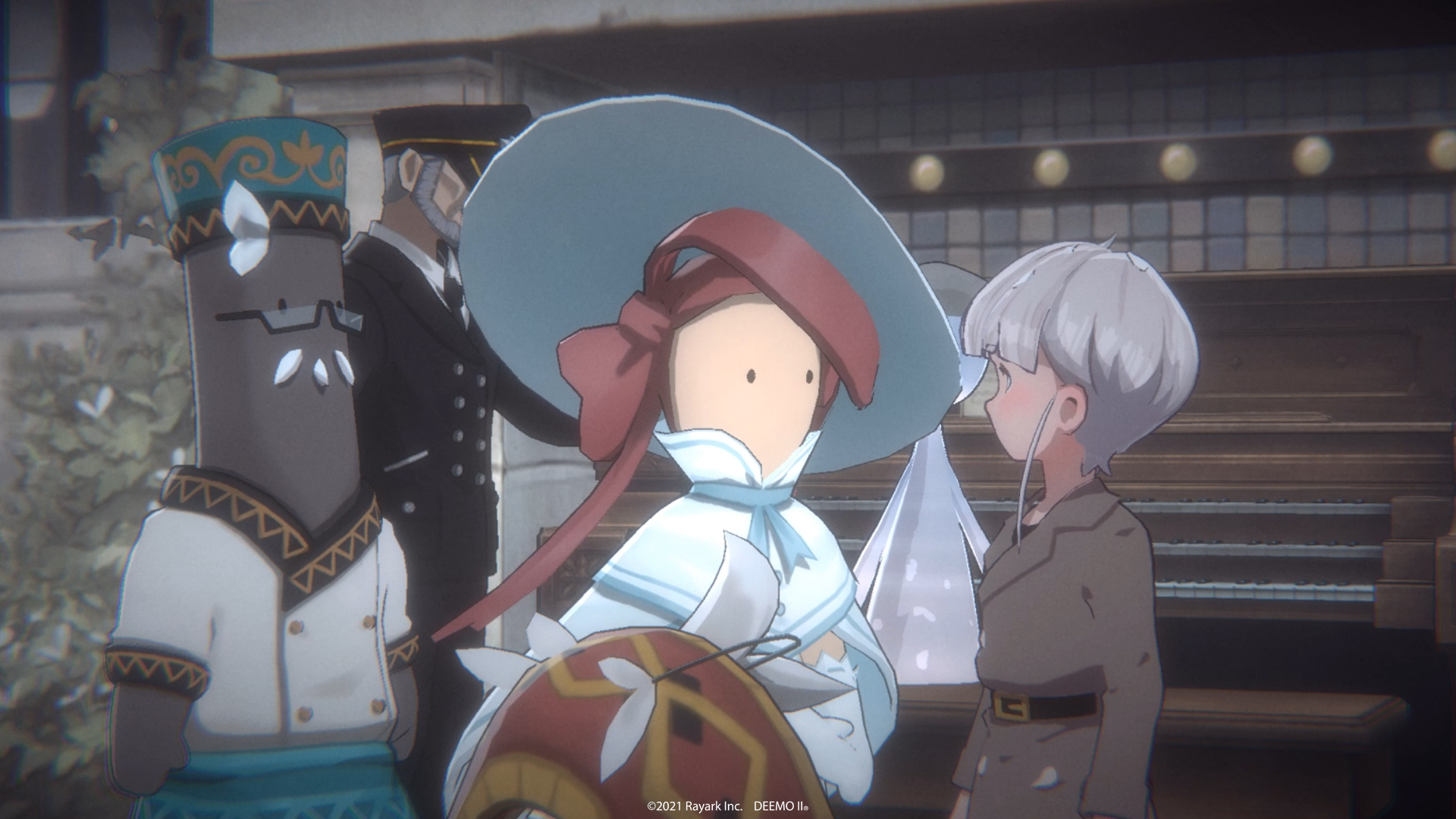 Finally, in terms of music, as an audio game “Flower Rain Melody”, the music foundation is naturally not bad. In fact, many game episodes have been sneaked online before, and they have also received a lot of praise.

Previously, You Mingyang, the CEO of Rhea and the producer of “Flower Rain Melody”, once said that the game wanted to present players with a Ghibli-level effect, and from the feedback from players on the first day, both the plot and the picture were well received by players. unanimous approval.

Based on the core concept, breaking the circle and facing all players

As mentioned at the beginning, although it is niche, the audio game category has established a long-term emotional connection with players through the special element of music. Even if the threshold is high, players often have high loyalty.

If you are familiar with Rhea’s game products, you will know that the “DEEMO” series has not always been a game known for its difficulty in gameplay. The first product of the series is much looser in judgment than other audio games. In comparison, Rhea’s “Cytus” series may be more attractive to core players.

In general, the biggest feature of the “DEEMO” series is actually the stories and pictures mentioned above. The game cleverly integrates music and narrative. Each track closely follows the development of the story and conveys emotions through music. , and then presented it in front of the player with a visual picture, coupled with just the right fragmented narrative method, so that “DEEMO” has gained a large number of non-audio game core users. 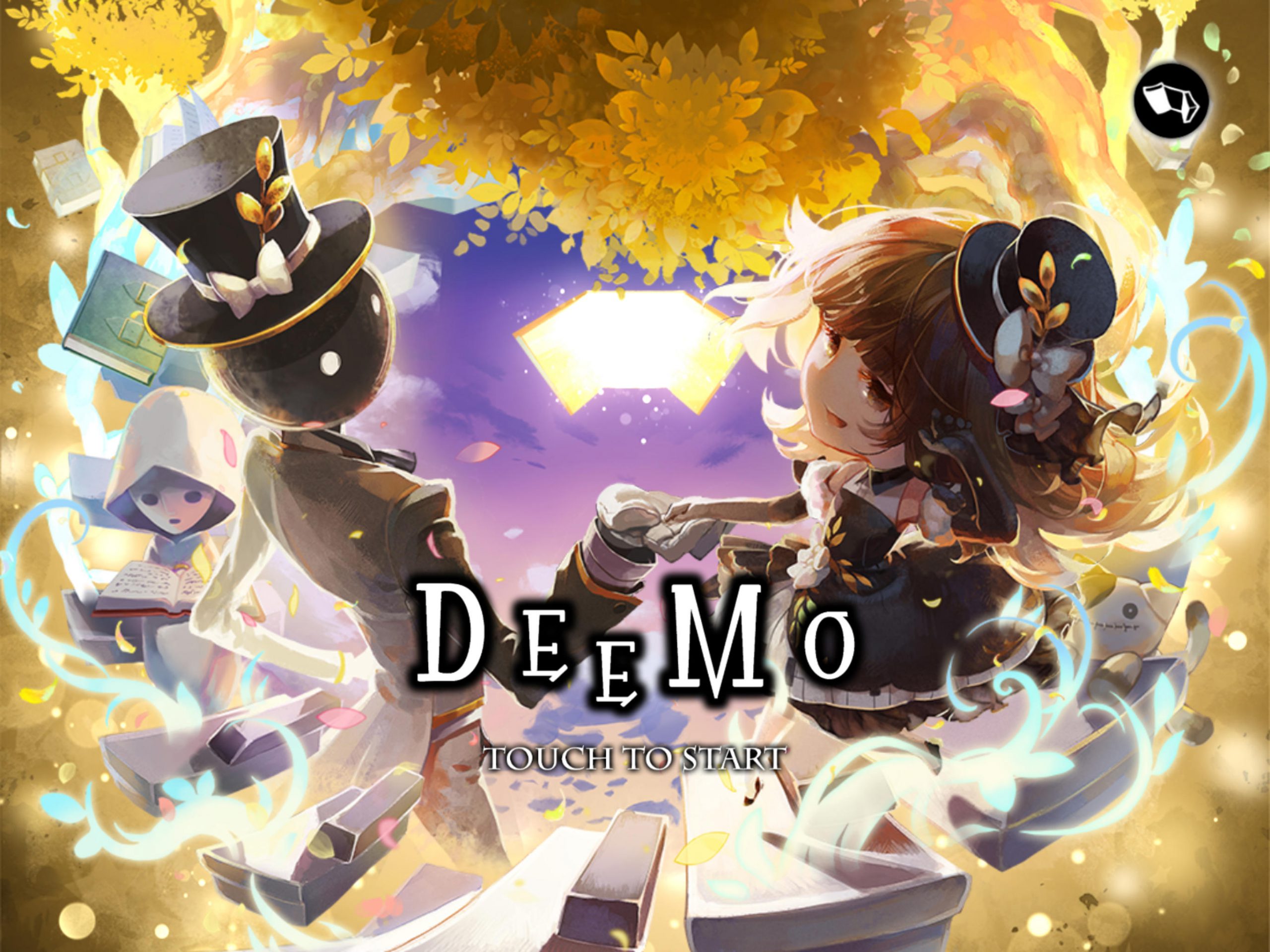 Therefore, as a latecomer, “Flower Rain Melody” also has a new goal, which is to allow more players to experience the charm of audio games. In fact, this is also the purpose of the game “Flower Rain Melody”. I hope that no matter whether you are an audio game player or not, you can enjoy the game to the fullest.

Therefore, at the gameplay level, on the one hand, “Flower Rain Melody” retains the consistent features and mechanisms of the series, that is, the simple and easy-to-use audio game method, and at the same time adds some restrictions to improve the operation of the game online, so as to achieve a game that is easy to learn and difficult to master. Effect.

On the whole, the mechanism of the audio game part of “Flower Rain Melody” is not complicated. It is a set of standard drop-type audio game methods, and there are not too many complicated operations. Basically, it falls to the bottom and then touches it. It is also relatively easy, and it is easy to hit combos.

Of course, there are also more challenging gameplays in the game. For example, some tracks in the new work have been added to the Note flow speed variable design, which pays more attention to the player’s control of reaction and rhythm, providing hardcore players with more room for manipulation. . In Rhea’s other audio games, such a design has also been ridiculed by players as “underworld speed change”, and the difficulty is evident.

On the other hand, it starts from the core of the product and expands to the outside. The “DEEMO” series has always been the most praised for its narrative and emotional conveyance through music, which has also been well received in “Flower Rain Melody”. Retain it, and on this basis, try to explore other fields in the form of addition.

For example, in addition to the core audio game part, the game also designed RPG elements, adding a lot of dialogue and puzzle parts, players can shuttle back and forth in different scenes, and sometimes need to cooperate with the plot to solve simple puzzles. In the final analysis, most of the newly added elements actually serve the plot, so it will not make players feel awkward. At the same time, the simpler operation method also lowers the threshold for players to a certain extent.

It is worth mentioning that in addition to these changes, the business model of “Flower Rain Melody” has also undergone major changes. Instead of buying out + DLC, it chose the method of free + in-app purchase, and also added systems such as passports. At the same time, the content of the game is much larger than before. In the just-launched version, the game has prepared 30 core songs and more than 120 other songs for players. In addition to the most famous piano songs in the series, Some other styles of tracks have also been added.

Taking the product as the origin, there are more possibilities beyond audio games

How much energy does an audio game have? Perhaps more than 20 years ago, audio games represented the “top stream” of arcade halls, but now, as arcade halls become a niche, subject to the threshold of gameplay, audio games also tend to be niche.

Even so, with the development of games to IP and gradually entering different industries with the support of the concept of pan-entertainment, audio games are not without space for in-depth exploration.

For example, on February 12, Rhea will hold the “2022 Rhea Concert” and broadcast it worldwide. At that time, the tracks of Rhea’s “Cytus 2”, “DEEMO”, “Vientiane Story” and other games will be released. will appear in it. This is not the first time that Rhea has held similar events. In fact, almost every year, Rhea will hold related events, and the response has been enthusiastic.

In fact, it is not just Rhea. For example, Le Element’s “Idol Dream Festival” and Tencent’s “QQ Hyun Dance” have created a vast sky in the entertainment track. Virtual idols, peripherals, and cross-industry linkages are These games bring new life.

Perhaps in terms of gameplay, there is not much room for audio games to be explored, but the emotional communication power of music is destined to have a steady stream of stories to be mined. Moreover, in essence, music is not a kind of What about games?

Ultra Rumble there is also a new console adventure