Unless you’ve been living under a rock, you’ve probably heard a thing or two about a new quiz sensation called Wordle. Wordle is a puzzle game in which players must work out a five-letter word in up to six guesses. It is a game that is simple enough to understand, but difficult to master, especially since you only get one chance to solve the puzzle per day. Fans looking for an additional Wordle solution may have downloaded an app from the iOS App Store and Google Play. One thing you may not realize is that there is actually no official app for the popular puzzle game, so be warned.

With the game’s rising popularity – thanks to its celebrity following and the competitive element – hundreds of “Wordle apps” have appeared on iPhone and Android.

However, these apps are far from official and some of them can even harm your phone.

Some of the Wordle clones include paid subscriptions, while others contain intrusive advertisements.

Apple has since taken matters into its own hands, banning many of the Wordle clones from appearing on the App Store.

But with more and more Wordle apps appearing every day, iOS and Android users need to be careful about what they download.

You should be especially careful about handing over money, especially now that there is a possibility that Apple will remove the app.

If you are not sure about the legitimacy of any Wordle app, you’d better be careful and stick to the official game on the website. 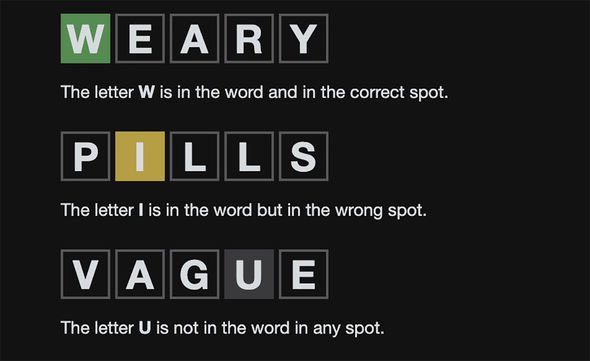 If you haven’t found the time to try Wordle, the rules are very simple. Players are given six chances to guess a five-letter word, through elimination.

For each guess, the letter tiles appear in one of three colors. If it turns gray, the letter does not appear in the word you guess.

The app keeps track of your statistics, shows the number of correct answers you got and your winning streak.