Sharing: A team of 2 people developed 33 game prototypes for trial and error in 9 months, and this game finally became a hit!

GameLook report/As a resident hit on the major game market lists, ultra-casual mini-games have always attracted the attention of many players with their simple and easy-to-understand gameplay and unique magical experience, accounting for almost one-third of the global game market downloads one.

The prosperous ultra-casual game market has undoubtedly attracted many manufacturers to compete on this track. Although the gameplay seems simple, this does not mean that developing such games is easy. On the contrary, in addition to the need for strong enough development strength, It is even more necessary to have a creative mind that can surpass the predecessors. It can be said that whoever creates a new trend to lead ultra-casual games can master the initiative on this track.

The track of hyper-casual games may not have a winning general, but there must be no shortage of dark horses. At the end of 2020, two young computer students, Harvey and Mathis, founded Blue Monkey Game Studio, and 9 months later, they released their first hyper-casual game, Flex Run 3D, and won awards including in the U.S. No. 1 on Google Play charts in 39 countries and No. 2 on the U.S. App Store.

In addition to completing the level, the game also sets up minor decoration elements. You can use diamonds to buy furniture, and the player’s play scene will also change with the decoration. In addition, diamonds can also be used to unlock random skins of characters. Of course, advertisements are also indispensable. The game will have a permanent advertising module at the start interface, and there will also be banner advertisements at the bottom of the screen. After customs clearance, there is a certain chance that advertisements will pop up. If the clearance fails, you can revive by watching advertisements. However, these ads can be turned off after you activate Flex Run Premium, which costs $2.99, but you can still use the ad revival.

So far, this game has received 10 million downloads worldwide, and the DAU has remained at 300,000. For a development team of only two people, such a result is undoubtedly a good start. Recently, Blue Monkey ‘s two co-founders shared at the Voodoo Live event, how they developed “Flex Run 3D” and the secret to such a success. 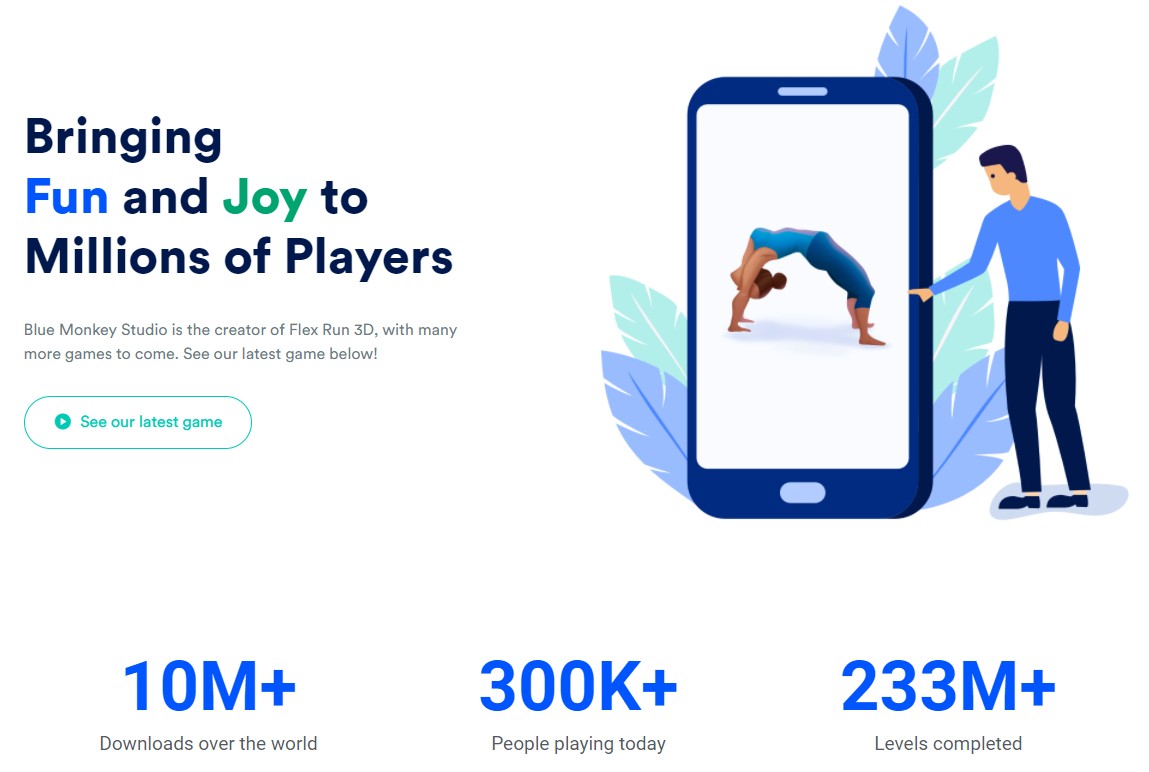 The following is the complete sharing content compiled and organized by GameLook:

All beginnings are hard

With no experience in game development – let alone hyper-casual games – the decision to create Blue Monkey Studios was a considerable test for Harvey and Mathis, both in terms of time and ability. But when the two co-founders found it particularly interesting to make and think about hypercasual, prototyping, data-driven, etc., they were hooked. “We feel like we already have a similar mindset, so hyper-casual is exactly the kind of thing we’re looking for,” Harvey said.

After creating the studio, from December 2020 to August 2021, the pair embarked on what they called a “marathon sprint” and learned as much as they could about hyper-casual games and how to make hits, while at the same time, They also came up with more than 240 game ideas and tested 33 game prototypes. 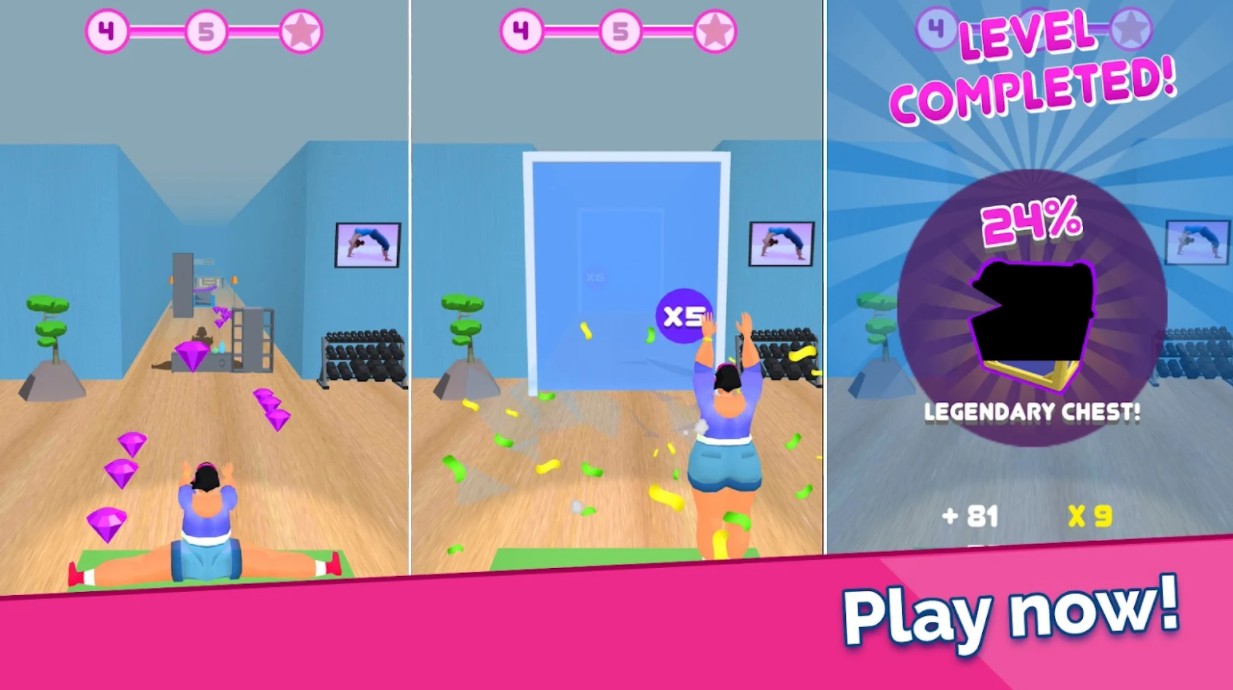 Mathis explained, “With Voodoo’s advice, we needed to make sure we had a lot more game ideas than prototyping so we didn’t waste time on ideas that wouldn’t get picked. Voodoo helped us learn how to filter our games. ideas and keep only those with high potential for testing.”

“These 240 game ideas are a combination of concepts, drafts and fully-fledged ideas. It is worth mentioning that in the production of 33 game prototypes, we took every experience and every failure as a lesson for the next round. Use. It can be said that all game creation process is part of our learning.” Harvey added.

Blue Monkey also shared an exhaustive share of early 33 game prototypes, and they pointed out that the vast majority of these games have CPIs between $0.5-$2, with three games below $0.50. 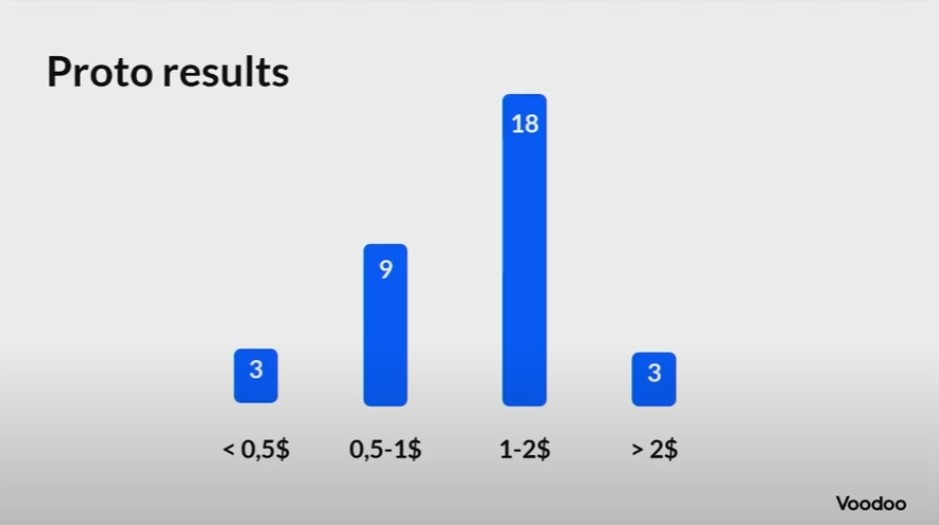 In the first few months, the two-person team of Blue Monkey showed very promising design standards and a good mentality, and with the emergence of some popular game prototypes, Voodoo also began to connect with them and recommended them to join Voodoo ‘s hyper-casual game assistance program. During a meeting they had with Voodoo’s release manager, Theophile Tabary, Blue Monkey began discussing the mechanics that would naturally bring more depth to the game. Manager Tabary asked them to try to focus on the “transformation” of the characters themselves, which is a successful game mechanic because it can balance the level of operation between different players, and even if there are no obstacles, everyone can use it differently. and they will become more proficient over time.

In this way, players will also pay more attention to the game mechanics themselves, rather than the different level designs, which will undoubtedly reduce the development pressure of creating many levels of different difficulty, especially in the game prototype stage. In addition, the recently popular “Couples Yoga” also gave them a lot of design inspiration, which led to the birth of “Flex Run 3D”.

At the level of game mechanics, as mentioned above, “Flex Run 3D” does not let the character “run” to the end, but the obstacle moves towards the character. With the deepening of the level, the moving speed and frequency of obstacles will gradually increase. The player is like a person doing yoga exercise, adjusting the position and avoiding obstacles through different exercise postures.

In the second iteration, Blue Monkey added a lightweight game scenario setting, which not only decorates the elements so that players can understand the character behavior in the game, but also has a more immersive sense – adding a story is always possible Giving the game contextual help and lowering the CPI, it was also in this iteration that they opted for the “Yoga at Home” theme and added decorative and furniture barriers, which also helped them bring the CPI down to $0.29.

All in all, the development team made fewer iterations of the game before the official release, mainly focusing on reducing CPI and providing lightweight scalability for the game. Ultimately, the game entered the soft launch stage with a $0.29 CPI, a 42% first-day retention rate, and an average playtime of 9 minutes.

After launch, Voodoo’s OPS team began to help optimize the game, and they provided a lot of help with the game’s art, level design, and functionality. For example, OPS adds new features to the game, allowing players to unlock new yoga poses and new obstacles, which also brings level variety to the game, which in turn increases retention and playtime. In addition, they have teamed up with Blue Monkey to make it easier for players to understand the bonus level at the end of each level in the game. With the help of these settings, the game’s first day retention increased from 42% to 55%.

The secret to building a hit

So, how did Blue Monkey, a two-person development team, go from ignorant of hyper-casual games to a blockbuster in just 9 months, and the two co-founders also talked about 3 secrets of its success :

1. Maintain a strong interest in learning

Harvey said, “We had no game development experience until we started working on hyper-casual games last year, so we just wanted to learn everything we needed to know. We wanted to absorb as much knowledge as possible about the industry and how to make successful games. So we’ve also taken an interest in everything hyper-casual – whether it’s articles, game streams, game descriptions, or feedback from release managers, we’ve almost completely absorbed that.”

Mathis said: “From the beginning, we set ourselves a clear and ambitious goal: to launch our first game.

We were determined to make it happen, and this translated into our drive, focus, and willpower during the prototyping process. Despite its many failures, hyper-casual is a challenging industry, and no matter what our prototype achieves, we know that one day we will definitely launch this product. “

According to Harvey, game ideas are the most important factor in the entire development process, “so we set a daily ‘brainstorm’ time and normalize it. But we also think outside of the set time, like we go shopping. Or when we’re doing some chores of life, we’re always thinking about game ideas. This is very important because it exercises your creativity, so whatever you see, you create a kind of ‘filter’ in your mind , and try to find inspiration in whatever you see.”

Voodoo’s release manager also added: “If there’s anything we can learn from Blue Monkey’s story, it’s the importance of mindset in hyper-casual development. The sheer determination of Harvey and Mathis to focus on ideation perfectly exemplifies hyper-casual games. The mindset needed to succeed.

Even without years of development experience and a critical learning curve, when it comes to ideation and prototyping, the right approach can help you launch your first hit game in less than a year. On top of that, two months after the first hit game was fully launched, they were already thinking about what to do with the next game—they wanted to go further and do more. “