On average, children between the ages of 11 and 18 play esports for three and a half hours a day, either at home (94 percent) or at a friend’s house (40 percent).

Parents recognize the power of esports to develop their children’s social skills – to communicate, to listen and even to lead

While some parents miss the ins and outs of esports, six in ten think it can play a positive role in education.

And nearly half of the 1,500 parents surveyed, whose kids take up esports, even think it should be added to the school or college curriculum.

Brian Horsburgh, Education Sales Director for Dell Technologies in the UK, who commissioned the study, said: “The capabilities demanded of tomorrow’s workforce will be those that technology cannot replicate.

“Soft skills that were once considered inferior to learnable “hard” skills such as machine operation will tip the balance in the future job market.

“Parents recognize the power of esports to develop their children’s social skills – to communicate, to listen and even to lead.

“That is a compelling argument for schools that want their students to be ready for the future.”

Children aged 11-18 typically play three and a half hours of esports a day (Image: Dell Technologies/SWNS)

The survey found that more than six in ten parents believe that teamwork skills are gained through esports.

Others cited problem solving (57 percent) and communication (54 percent) as other key lessons learned from picking up a joystick.

Nearly seven in ten of those surveyed, via OnePoll, believe that esports allow their child to develop skills that they would not gain through traditional teaching methods.

And more than half (52 percent) think it will boost children’s school results.

It also found that nearly a third of parents (32 percent) would like their child to have a career in esports. 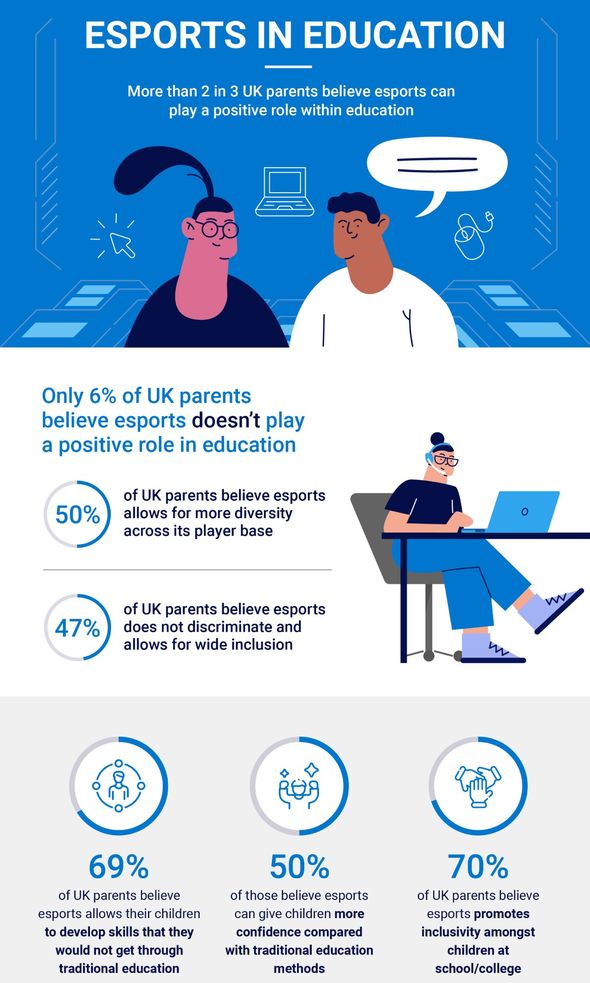 Nearly half of parents believe esports should be added to the school or college curriculum (Image: Dell Technologies/SWNS)

“We need to embrace more ways for children — of all abilities, needs and backgrounds — to learn, and those ways need to reflect the future career landscape.”

However, the study also surveyed 500 educational stakeholders and found that 61 percent believe there is not enough evidence to demonstrate the educational benefits of esports.

Some of the biggest barriers schools face in implementing esports into the curriculum include esports equipment being too expensive, network connections not strong enough, and not having the facilities to accommodate the right type of equipment.

Tom Dore, Head of Education at the British Esports Association, said: “We welcome further quantitative research on esports in education, to support the feedback we receive from teachers and students on the positive impact esports is having in their classrooms and school communities.

“Esports is a means of motivating and engaging a broad audience of young people.

“As a teacher, I have seen firsthand the benefits for my students when they participate and compete in esports.”

On August 19th there will be a big free update