Today, April 29, we celebrate World Dance Day. That was decided by the International Dance Committee in 1982. What better way to celebrate today than with a visit to the honey jar! Fans have been waiting with great anticipation to see what the famous Honeybee Inn will be like in the Final Fantasy VII Remake would look like.

We know now. Square Enix released some interesting artwork from the creation process today on Twitter† Artwork and trivia have been shared on social media for a while now, and today it’s all about the honey jar.

This time we see images that we don’t often see. Square Enix shared the first sketches of the Honeydukes dance scenes. The so-called storyboards of the cutscenes sketch the scenes even before the first renders are made. This is what they look like:

While Square Enix keeps quiet about the sketches on Twitter, we find out in the Final Fantasy VII Remake Material Ultimania* even more. “This was probably the most ambitious and challenging cutscene in the entire game,” film director Hidekazu Miyake recalls in the book.

“It asked a lot of us that we’d just never done it before, so it took almost half a year from concept to delivery. We knew from the start that we wanted to realistically portray Wallmarkt’s glittering nightlife, so we enlisted dancers and a choreographer from a cabaret-style background to help us with the routines,” explains Miyake.

Toriyama went to a dance club

Some time ago, director Motomu Toriyama also gave an insight into his work on the honey pot. “The whole scene took a long time, from the initial idea to composing the music, capturing movement and matching the music and movement. I was incredibly nervous until everything finally fell into place,” Toriyama said at the time.

And he even went to a dance club for research. “We started with a general outline of the song and gradually built up from there. I remember going to a club in Roppongi with composer Mitsuto Suzuki to get a better idea of ​​how a real dance show works!” 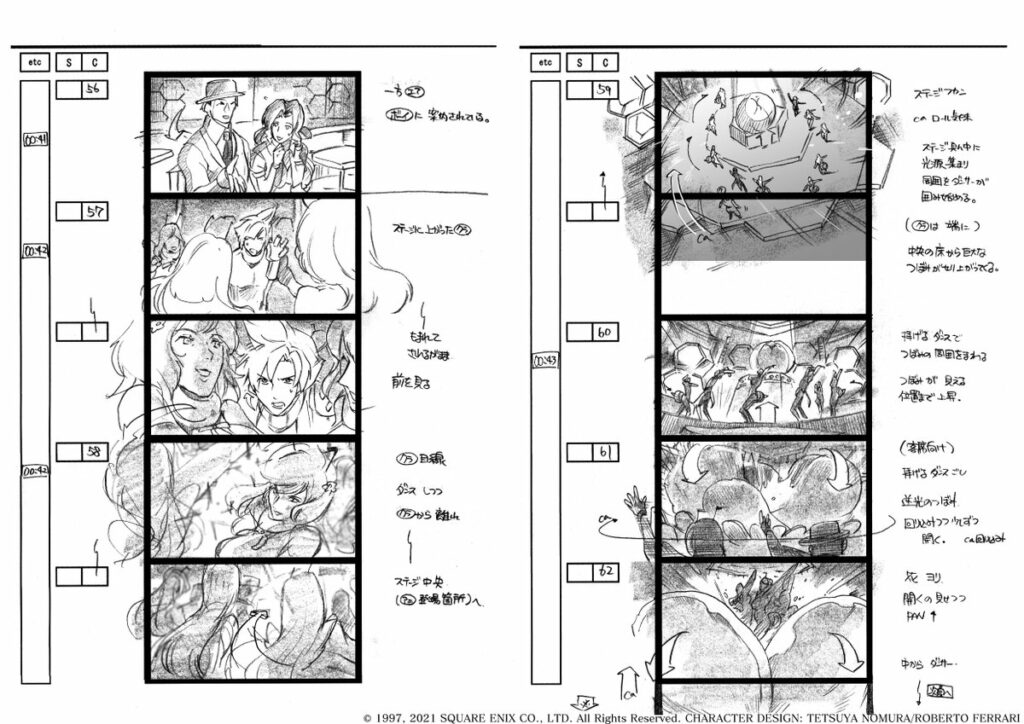 in the Final Fantasy VII Remake Material Ultimania* Incidentally, the sketches are commented in English. The result is the dazzling scenes in Honeydukes that should live up to the expectations of fans of the original. Do you have? What do you say, what do you think of the honey jar?

Do you want more artworks and facts? So far, Square Enix has covered the restrooms at Shinra’s headquarters, the taste of Chocobo popcorn, and the cost of a LOVELESS ticket, among other things. It also has a legendary boss dedicated to it, just like Tifa and her shorts. Recently there was a look at the Mako offerings in remote areas, at the materials store in Wallmarkt and design difficulties that come with a cool boss.

Cross Worlds also opens its doors in the west today

Cross Worlds also opens its doors in the west today