Square Enix bridges time until the sequel of Final Fantasy VII Remake on the Japanese Twitter account with beautiful works of art and interesting facts. This time is about the church in sector 5, which in the original was the scene of a famous scene. The scenery is expanded in the remake.

Square Enix has released beautiful artwork of the church’s interior, as well as some early sketches of the windows, lamps, and the entire building from the outside. in the tweet one focuses on the banks. In the original there was no struggle in the church, which now led to a space problem. Cloud solves the problem by throwing a soldier into the benches. More space to fight.

You can find these works of art (among others) in the Final Fantasy VII Remake Material Ultimania† There, the developers reveal many other interesting details about the new church of the remake. Very observant onlookers will notice that there is a detail missing from the beautiful work of art. Reno sits on a small lantern on top of the pillars during the fight.

“The battle spot in the church where Reno jumps on a pillar to watch Cloud fight was taken after the game was in development for a while, so the original image for this scene didn’t include the lantern he uses as a seat,” explains design supervisor Masatoshi Oochi.

“This information was never made official, but a colleague told me that the subcity of Sector 5 originally sprang from the excavation site for materials used to build the city above the slabs,” explains Tamanoi. “The church was built to commemorate the countless dead and as a refuge for the weary souls who had labored in hellish conditions to extract the materials. It was amazing to hear how much thought was put into the background of all these places.”

Co-director Motomu Toriyama theme in the Final Fantasy VII Remake Material Ultimania* then also the huge rocket that lands in the church. “We can assume that the church fell into disrepair after the rocket impact,” Toriyama said.

After escaping with Aerith, get a good look at the exterior of the church as you climb over the rooftops. Since this wasn’t in the original version of the game, I was very moved when I first saw this.” 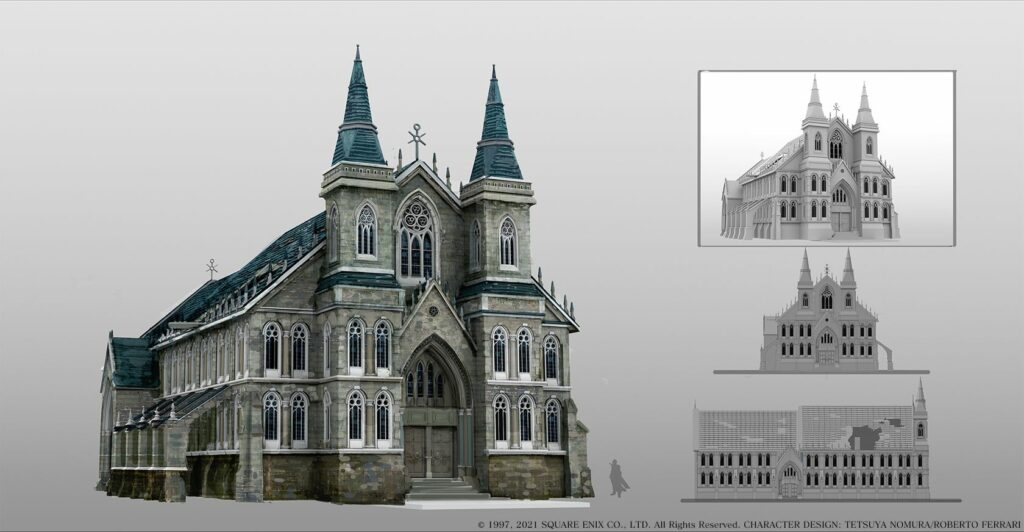 Do you want more works of art and facts?

So far, Square Enix has covered the restrooms at Shinra’s headquarters, the taste of Chocobo popcorn, and the cost of a LOVELESS ticket, among other things. It also has a legendary boss dedicated to it, just like Tifa and her shorts.

Recently, there was a look at the Mako offerings in remote areas, the materials store in Wallmarkt, and design difficulties that a cool boss entails. We were also shown how the well-known dance routine in the honey pot was created.