Faisal bin Mishaal inaugurates an innovative 2022 exhibition at Qassim University, with the participation of 13 institutions and 134 innovations

Editorial Team
May 19, 2022
Share
Facebook
Twitter
Pinterest
WhatsApp
Today, His Royal Highness Prince Dr. Faisal bin Mishaal bin Saud bin Abdulaziz, Governor of the Qassim region, sponsored the “Innovative 2022 Exhibition”, organized by Qassim University in the main hall of the university city, in the presence of His Your Excellency Dr. Abdul Rahman bin Hamad Al-Daoud, President of the University, and some Directors of government agencies in the region, agents and members of the University Council, where His Highness, during the inauguration of the exhibition, visited the various corners containing holdings of 13 entities and 134 innovations, whose innovations and ideas can be converted into products with economic and developmental returns, praising the efforts of innovative students even under the dome of the university.His Highness honored the heroes of science Saudi Arabia and the team of engineers who participated in the inauguration of the exhibition based on an invitation to participate in the exhibition activities from the management of the ‘University of Qassim in exchange for achieving 16 major international awards in “ISEF 2022”. They raise the head of the nation and the Arab world and The Islamic world, and His Highness also congratulated the Keeper of the Two Holy Mosques, and His Highness the faithful Crown Prince – may God keep them – for this great achievement “Aisf”, we saw a few days ago. And what the pupils of the Kingdom have achieved, indicating that this opportunity corresponds to this conquest to confirm that the bet on which this country was based in education since the time of the founding king – that God rest his soul – noting that many do not know that the missions started from the days of the founder Outside the Kingdom and in developed countries until they reached, after years, this milestone.Her Highness added that Qassim University accompanied the event with this exhibition , and that the university has embraced all educational authorities in such exhibits. His Highness suggested that the Qassim Science Center in Unaizah Governorate be a permanent exhibition for inventors, inventors, innovators and innovators. To highlight everything that the sons and daughters of the country in general and of the region in particular have done, and those inventions for every visitor, underlining that the center has become a tourist destination and for those who want to see the development of the country, and will be a scientific and civil interface for all to see the creativity of the inventors and the inventions of the children of His Highness congratulated His Excellency the President The University and its employees for the efforts that have been made in this illustrious exhibition. 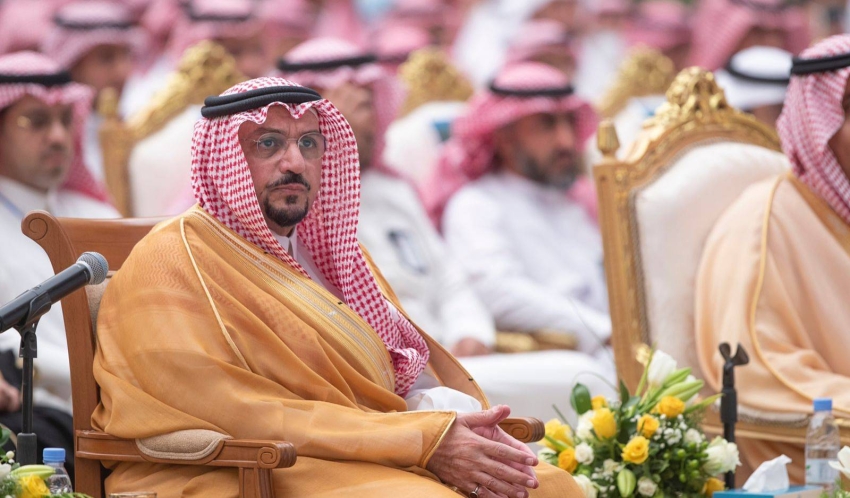 For his part, His Excellency Prof. Dr. Abdul Rahman bin Hamad Al-Daoud, President of the University, praised the support enjoyed by the university from the wise leadership – may God protect it – who spared no efforts. in supporting innovation and innovators, and injecting more innovative projects into the national economy, to achieve sustainable development. Empowering innovators and distinguished talents in the scientific and technical fields, noting that this exhibition is one of the university’s initiatives to spread the culture of innovation, discover innovators and innovators in the region, valuing talents and honing skills and creativity, aligned with the pillars of the human capacity development program, preparing students to compete in national and international forums.

Al-Daoud added that this exhibition represents a milestone in the gathering of an ongoing effort that has lasted more than eight months and the university has targeted more than eleven educational sectors in the region and has culminated in the experience and support of relevant institutions in this field in the country, such as: King Abdulaziz and His Companions Foundation for Giftedness and Creativity, and The Saudi Intellectual Property Authority, indicating that the number of innovations presented reached 320 and the number of innovators exceeded 938 innovators and 134 innovations they were approved after evaluating and comparing them.

The president of the university pointed out that the continued support the university has received from our rational government and the following of His Highness the Emir of the generous region, and the efforts of colleagues and students of the university have had a significant impact. on the recent achievement of numerous awards and advanced centers locally and globally, in particular the advancement of its ranking in innovation to be achieved (426 globally according to the Skimago ranking, two medals at the Geneva Innovation Fair, as well as winning first place university challenge innovation at Saudi public and private university level and qualify to participate in the Babson College Program in the United States of America for Business Administration, as well as win numerous projects and innovations at the Saudi university level. wishes of the General Authority for Small and Medium-sized Enterprises (Monshaat).

Al-Daoud explained that the university has invited the sons and daughters of the country, winners and winners of numerous awards at the ISEF International Fair, to participate in this exhibition and honor them in appreciation for these innovators. He also thanked His Highness the Governor of the region for honoring the show and encouraging the innovators and talented people, as well as attendees from all educational and training institutions and the organizers of the show, wishing everyone success and creativity.

This exhibition aims to achieve the goals of the Ministry of Education for the year 2022, valuing talent and innovation, honing skills and creativity, and keeping up with national trends in accordance with the Kingdom Vision 2030 as well as aspirations of the Ministry of Education, and emphasizing the university’s pioneering role in disseminating knowledge and enabling innovation, as well as improving basic and future skills in line with my knees

8 steps to send text messages on WhatsApp without typing

How can you see deleted messages on WhatsApp?

The abortion abortion in the United States. The confidentiality of Google and Meta data is at stake

Pioneers of Olive Town coming to PlayStation 4 in July