Season 2 introduces a new 100-tier Battle Pass with up to 180 rewards. Purchasing the Premium Battle Pass is required to earn all rewards and 1,000 Halo Credits, but all players will be able to unlock free tiers that include rewards like Challenge Swaps, armor pieces, and the all new Lone Wolves armor core: RAKSHASA.

In addition to this new Battle Pass, Season 2 introduces a new story experience for Halo Infinite. When first accessing the Season 2 menu, players will be able to watch an all new cinematic.

This cinematic can be viewed again later by using the shortcut button listed in the helpbar near the bottom on the Season 2 menu. 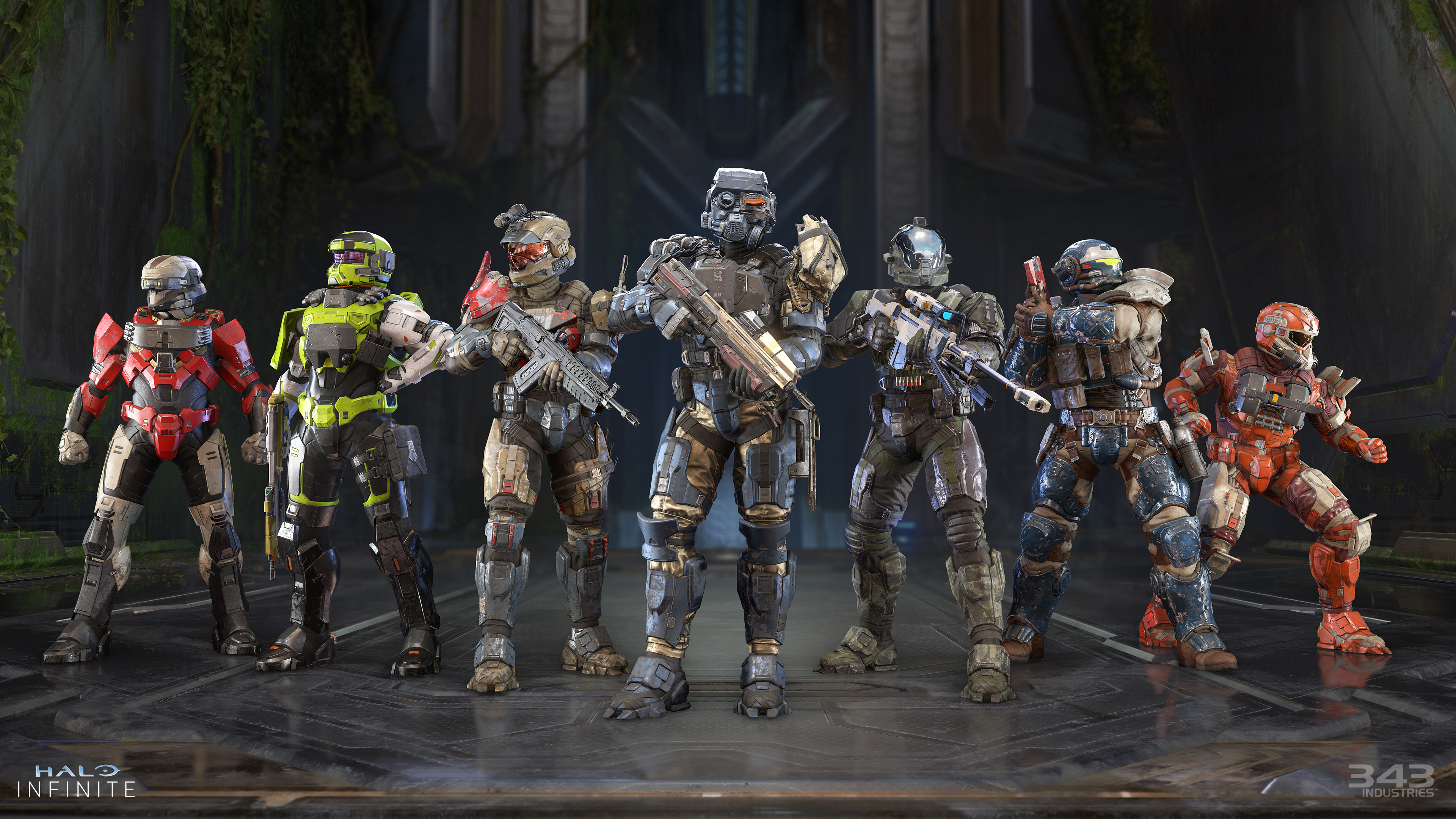 Players who have purchased the Premium Battle Pass for Season 1, Heroes of Reach, and have not yet completed it will be able to re-equip it and unlock any previously locked tiers during Season 2.

To change which Battle Pass is equipped, follow the steps below:

For players who did not complete the Season 1 Battle Pass previously and do not currently own Season 1’s Premium Battle Pass, it can be purchased from the Battle Pass Switcher menu or the Shop menu.

Watch the “Season 2 Community Livestream” to learn more about Season 2, and to see the full Season 2 Battle Pass and the Battle Pass Switcher menu (timestamped link) in action.

Event dates listed here are subject to change. Please stay tuned to the News section of Halo Waypoint for the latest updates on in-game events.

When these events are not active, both Last Spartan Standing and Breaker will be available in matchmaking and Custom Games.

Season 2’s Fracture event will provide players with multiple weeklong opportunities to complete Event Challenges in the new Land Grab mode and earn up to 30 free customization items. More details on the Land Grab mode variant can be found below or in the “Season 2: Modes Preview” blog.

Like the Lone Wolves event above, these customization items can only be earned by completing Event Challenges while the event is active.

At the core of this event’s free customization items is the new armor core: EAGLESTRIKE. This armor core can be unlocked for free by completing Event Challenges, and all other armor pieces earned via the Entrenched Event Pass are exclusive to this armor core.

This event will run six times throughout Season 2, with the first window being May 24-30, 2022. Stay tuned to the News section of Halo Waypoint for the latest updates on in-game events.

In this free-for-all (FFA) experience, 12 players spawn with a confined loadout and 5 respawns. Once a player runs out of respawns and can no longer participate, they can either spectate or leave the match without penalty.

Please note that when leaving a Last Spartan Standing session before it ends, some Challenges will not update until that match ends. If you left a match early due to being eliminated, it may take several minutes for that match to end and your Challenge progress to update. 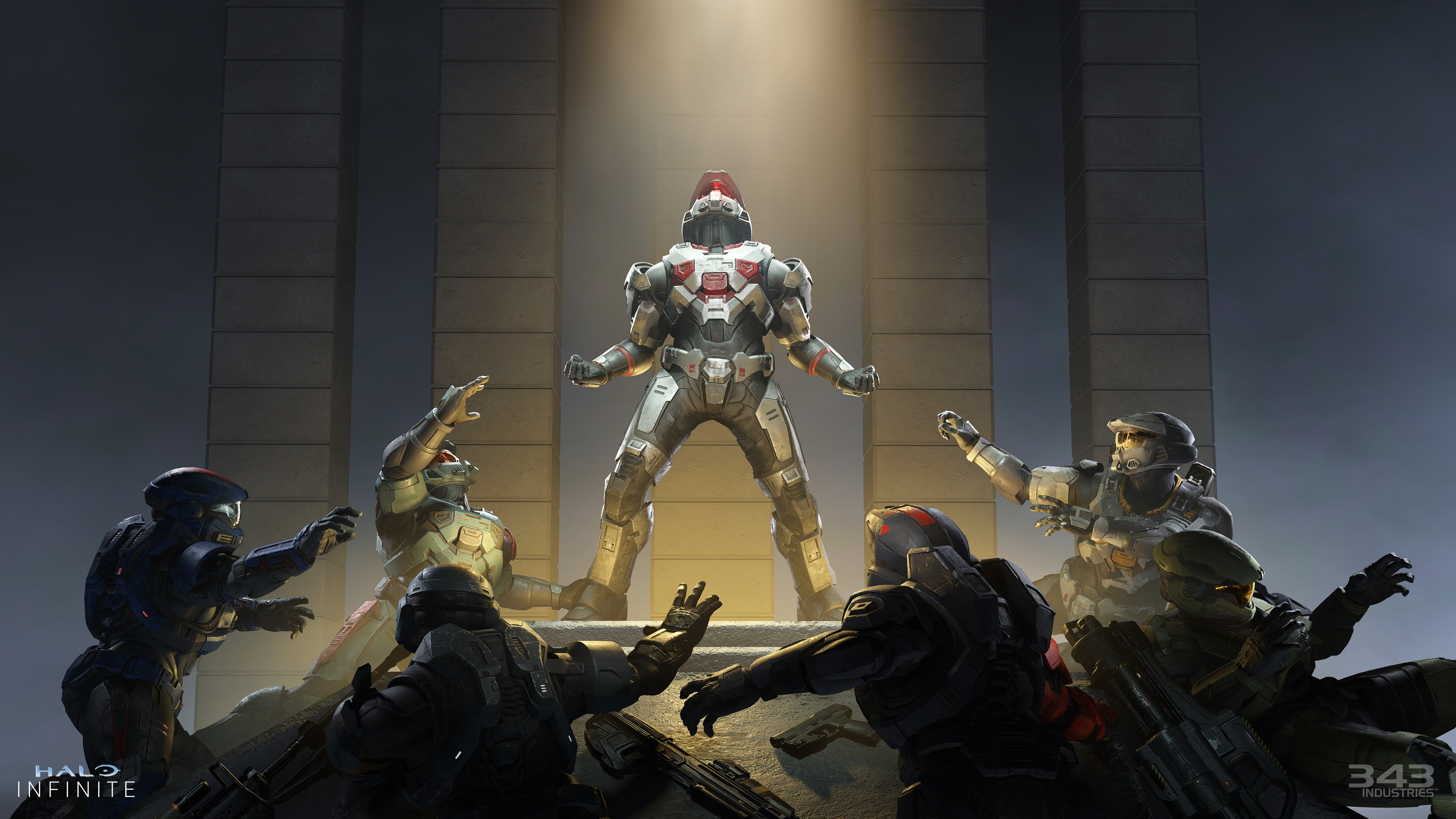 King of the Hill (KOTH)

KOTH is available in Ranked Arena, Quick Play, Bot Bootcamp, a dedicated King of the Hill playlist, and Custom Games. 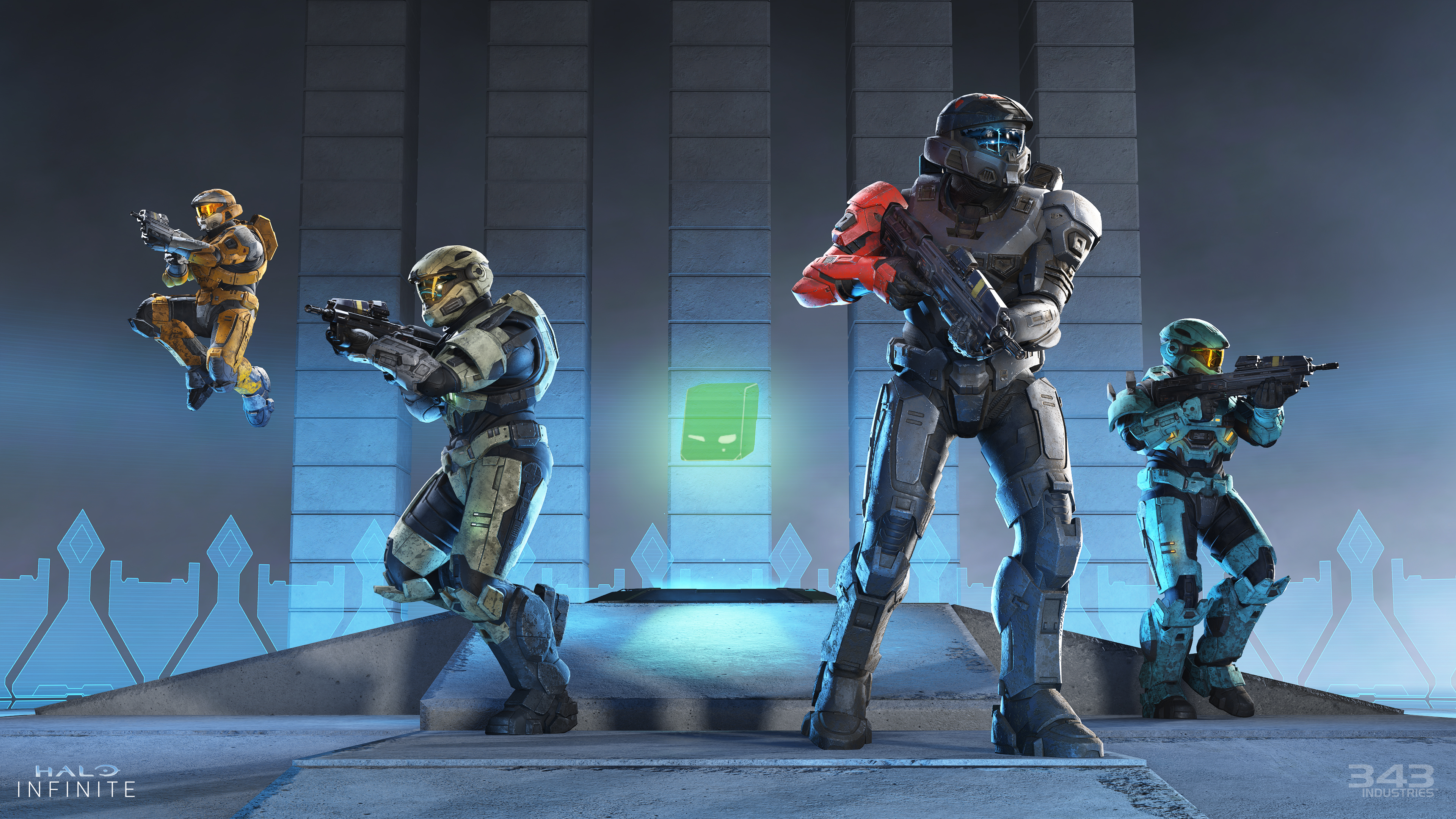 Key image for King of the Hill. 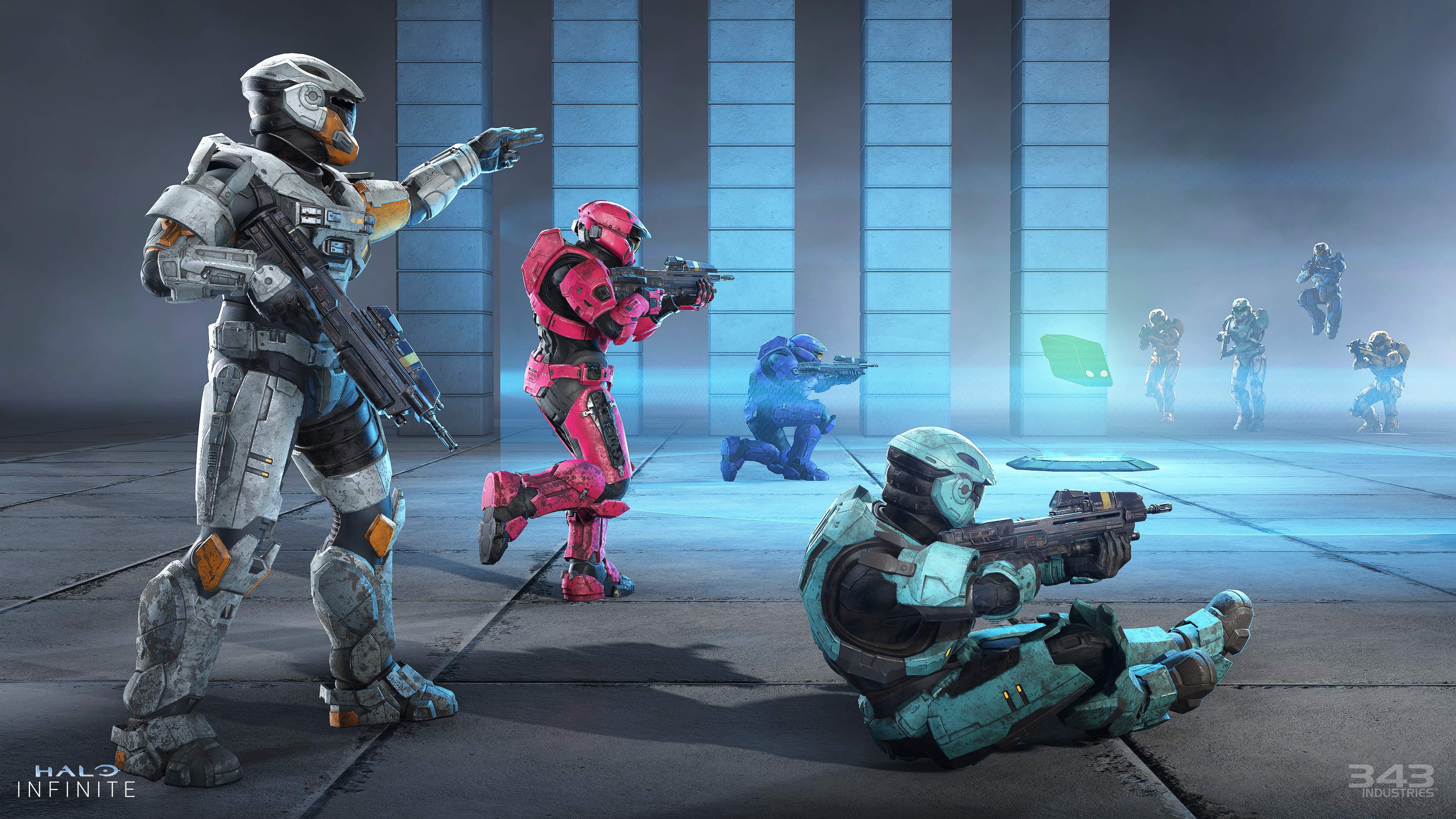 In addition to the new modes listed above, several new playlists will begin to rotate in and out of Halo Infinite’s matchmaking. The first rotational playlist of the season is Rumble Pit. Replacing Free-For-All (FFA) Slayer, Rumble Pit is an FFA playlist with more mode variants to create more FFA gameplay variety.

For example, the following variants will be included in Rumble Pit:

Stay tuned to the News section of Halo Waypoint and @Halo on Twitter for the latest updates on rotational playlists.

Attrition, which debuted in Season 1’s Cyber Showdown event, is also now available in the Quick Play and Bot Bootcamp playlists as well as Custom Games.

Elimination, a variant of Attrition in which the shared pool of respawns is disabled, will be available later in Season 2 as a rotating playlist.

The “Medic!” Achievement, which is unlocked by reviving three allies in Elimination or Attrition, can now be unlocked in both Custom Games and matchmaking.

Read more about the design process for Season 2’s new modes and playlists in the “Season 2: Modes Preview” blog on Waypoint, or view the trailer below to see them in action:

Featuring two bases at either end of a long center lane, this Banished ship breaking yard offers great sightlines for snipers and high-intensity getaways for Warthog drivers. Breaker’s central lane is also home to a large laser that moves across a central pit. 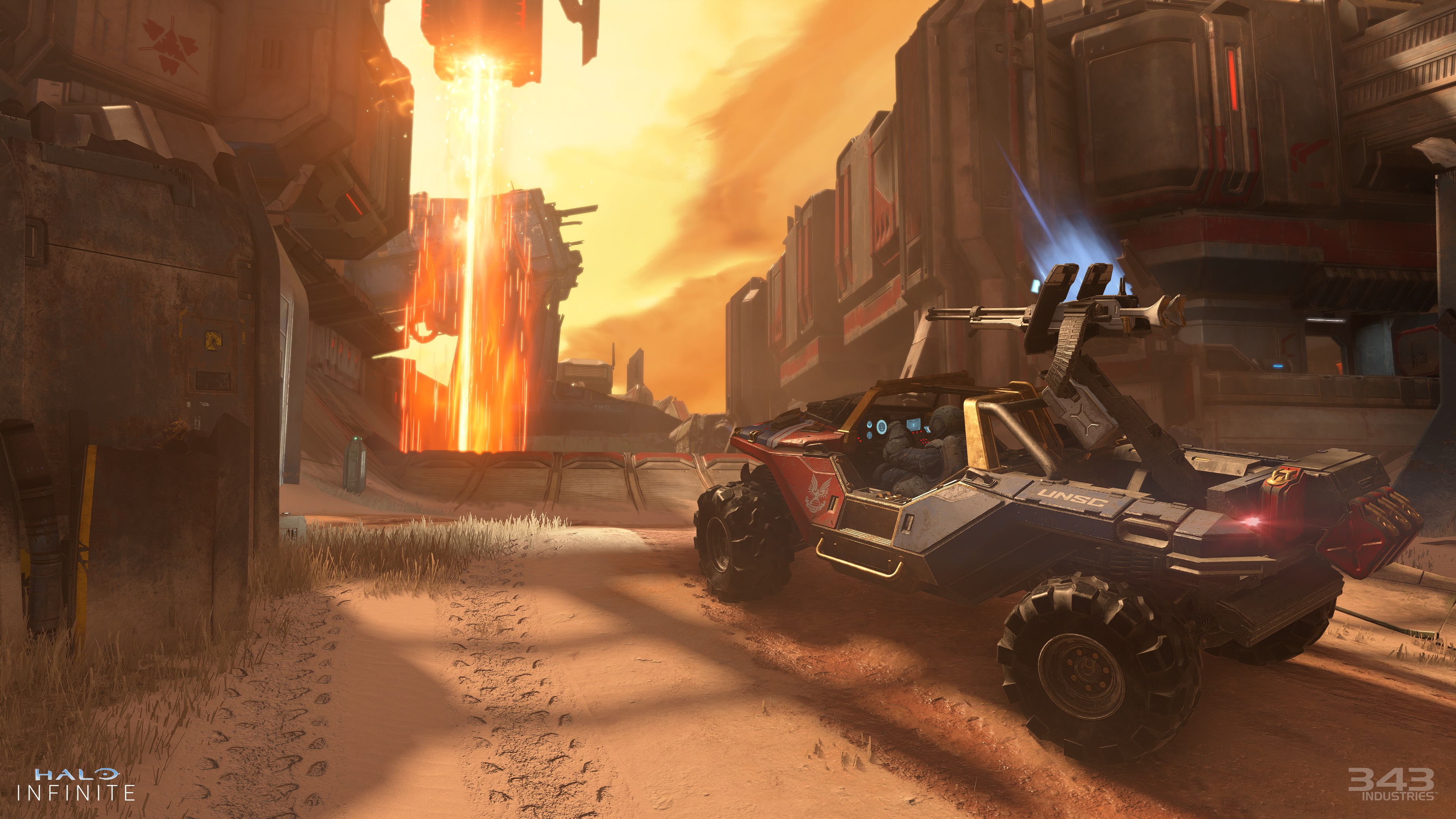 This overgrown Forerunner structure, with its multiple waterfalls and expansive vistas, is perfect for fast-paced Arena action. A light bridge connecting the two sides is also home to a Power Equipment spawn, but be careful not to fall off and disrupt the passing Sentinels.

Catalyst is available in most Arena matchmaking playlists, including Ranked Arena, and Custom Games. 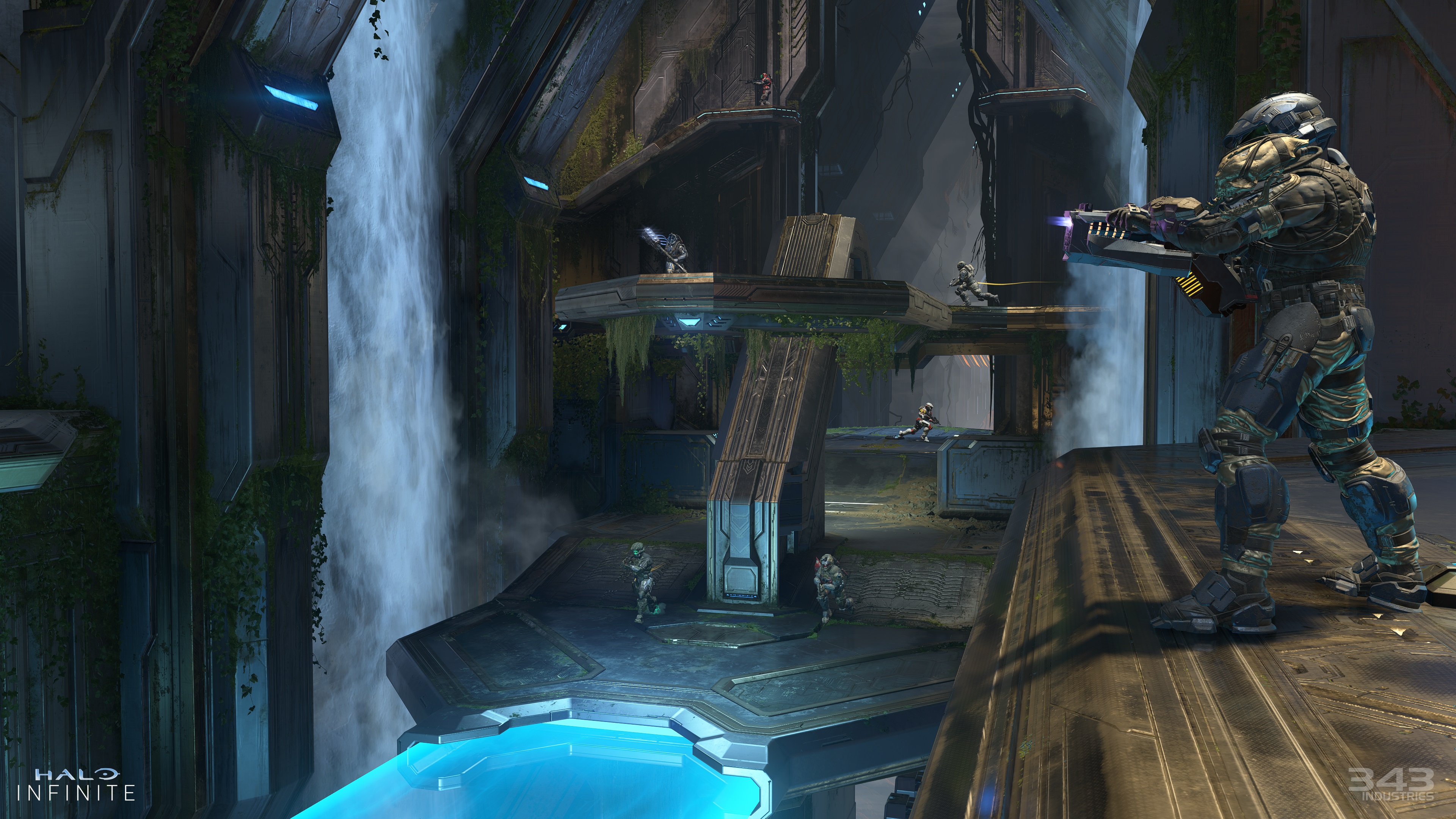 Screenshot of Spartans battling on Catalyst.

For more information on the design of Breaker and Catalyst, visit the “Season 2: Map Previews” blog on Waypoint or view the video below for a flythrough of both new maps:

Let us know what you think of this change by sharing feedback in the Halo Waypoint forums.

All Weapon Drills in the Academy now have an endless variant, meaning they do not have a timer or scoreboard. These Drills can be used to improve your mastery of the weapon sandbox or to fine-tune your aiming controls.

Like the addition of the multiplayer announcer to BTB, this tier of Weapon Drills was inspired by player feedback. Thank you to all players who provided feedback in the Halo Waypoint forums and elsewhere! 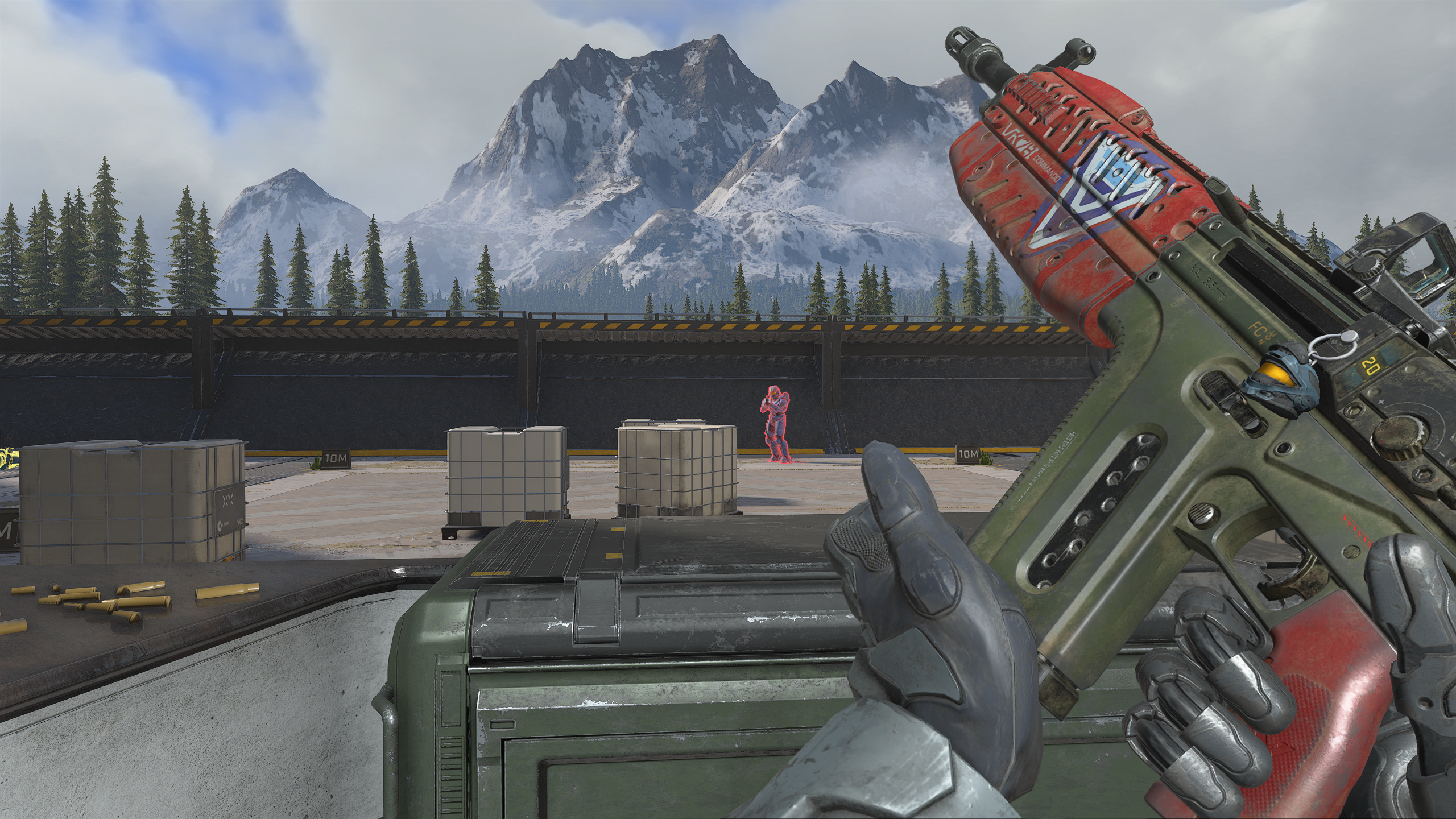 First-person perspective of a player in the VK78 Commando Weapon Drill.

Various improvements have been made to bot behavior:

The opacity and thickness of player outlines can now be adjusted. This includes the ability to disable outlines entirely. Changing these options will apply to enemies and allies in both multiplayer and Academy modes.

These settings can be adjusted in the User Interface (UI) tab of the Settings menu in-game.

These options can be adjusted in the Video tab of the Settings menu. More details about enabling the 120Hz refresh option in Halo Infinite can be found in the “How to Enable Graphics Quality Mode for Halo Infinite.

MORE INFORMATION ABOUT THIS UPDATE

For additional insight on these new features, see the Season 2 Launch blog on Halo Waypoint.

As mentioned in the “Closer Look: Halo Infinite’s Ranked Experience” blog, player ranks in Halo Infinite have been reset for Season 2. This reset comes alongside a new batch of emblem rewards that players can earn as they work their way up the ranks.

Alongside the launch of Season 2, the Halo Waypoint app will also be updated with some minor improvements. This update will also disable the Customization feature for Halo Infinite in the app, and it will be disabled in web browsers as well. The Halo Waypoint team is planning to bring this feature back as soon as possible. Stay tuned to @HaloSupport on Twitter for the latest news on updates and review our Halo Waypoint web and mobile experiences article for more information.

Some of the improvements in this update required us to invalidate past Theater films created during Season 1. If you have moments you would like to save, please record them using a digital recording tool.

Many platforms automatically update games. To manually update or verify your game is up-to-date, follow the steps included in our How to Update Halo Infinite article.

To learn more Halo Infinite and its development process, check out the following resources on Halo Support or Halo Waypoint:

Join the Halo Insider program for the chance to see new features before they’re released publicly and, if you’ve encountered a bug in-game, submit a Halo Support ticket so that the development team can investigate the issue. Thank you to all Halo Insiders and ticket submitters for their bug reports and feedback! 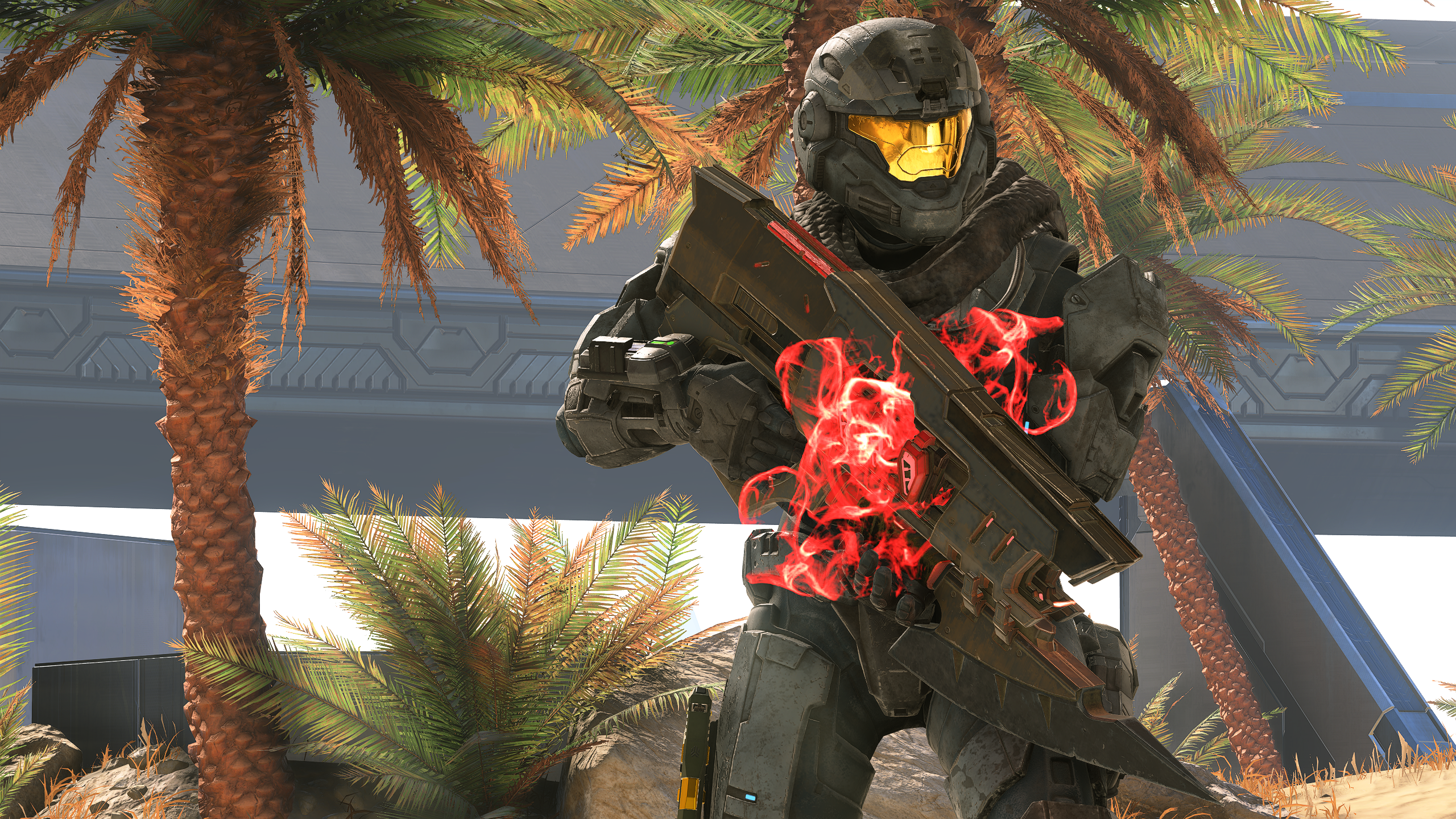 A Spartan vents an overheated Ravager on Behemoth. 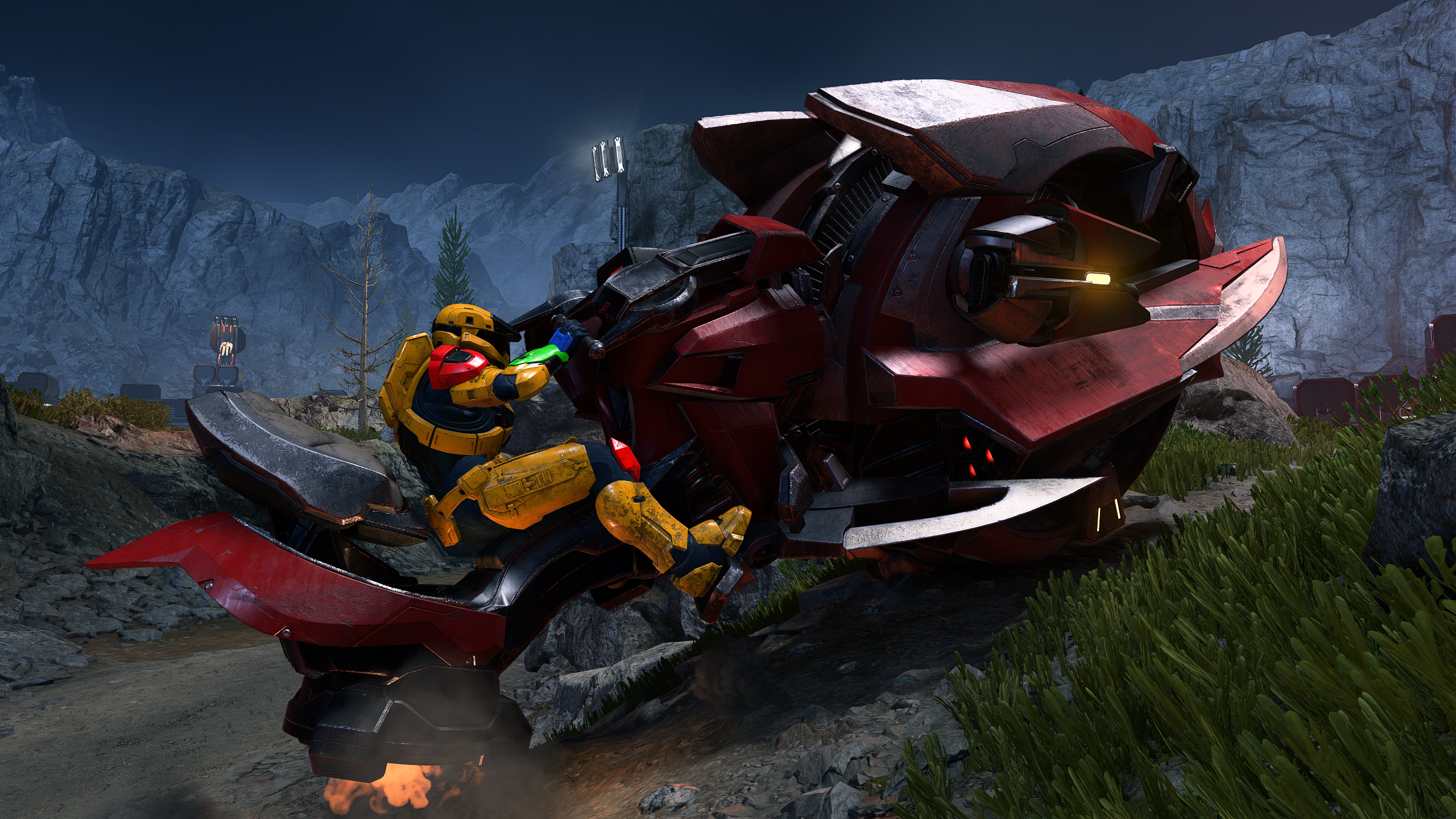 A Spartan drives the Chopper up an incline on Deadlock.

Many improvements come from Halo Support tickets submitted by our community. Thank you for participating and please keep submitting tickets!

Halo Support tickets, once reviewed by our agents, will count towards the studio’s “Hotlist.” If there are any bugs, glitches, or other in-game issues that you would like to see addressed in a future Halo Infinite update, be sure to submit a ticket so we can inform the development team and track the issue internally on the Hotlist. The more tickets we have for an issue, the higher it may land on the Hotlist.

For more information on the Hotlist, see the “Halo Infinite Update – March 2022” blog or the “Season 2 Community Livestream.”

All options mentioned in this section can be found in the Accessibility tab of the Settings menu.

With this update, the team has added multiple new issues to our Known Issues lists:

For a full list of known issues in Halo Infinite, go to our Known Issues section.

The abortion abortion in the United States. The confidentiality of Google and Meta data is at stake