Sony has the slides for the investor presentation of the current company figures released and from this come a lot of interesting details about the upcoming direction of PlayStation. Sony is positioning itself more broadly. The goal is to have half of all games on PC and mobile by 2025.

Sony’s PC tactics are no longer a secret and this is where Sony PlayStation has been gaining speed in recent months. Horizon Zero Dawn was followed by Days Gone and God of War, and the Uncharted: Legacy of Thieves Collection is coming to PC soon. Meanwhile, Steam even has its own label.

There is certainly still room for improvement in the mobile market. The medium-term plan: By 2025, half of Sony’s releases will be for PlayStation 5, the other half for PCs and mobile devices. This is evident from a slide.

How well you are already positioned on PCs should already become apparent in the new and current financial year. After net sales of $35 million and $80 million in previous years, the company aims to sell $300 million worth of PC games in the new year.

Lots to get in the PC universe

Sony announced some time ago that there was an opportunity to make great games accessible to a wider audience. In this way one can promote profitability in times when game development is becoming more and more expensive. Some time ago, SIE Worldwide Studios also brought in PC port specialist Nixxes Software for this work.

It all makes perfect sense when you look at the numbers, the analyst Matt Piscatella ready for that. According to this, only a third of PC gamers in the US also own a PS4 and only 8 percent have a PS5. So there is something to gain. Sony currently looks like this: 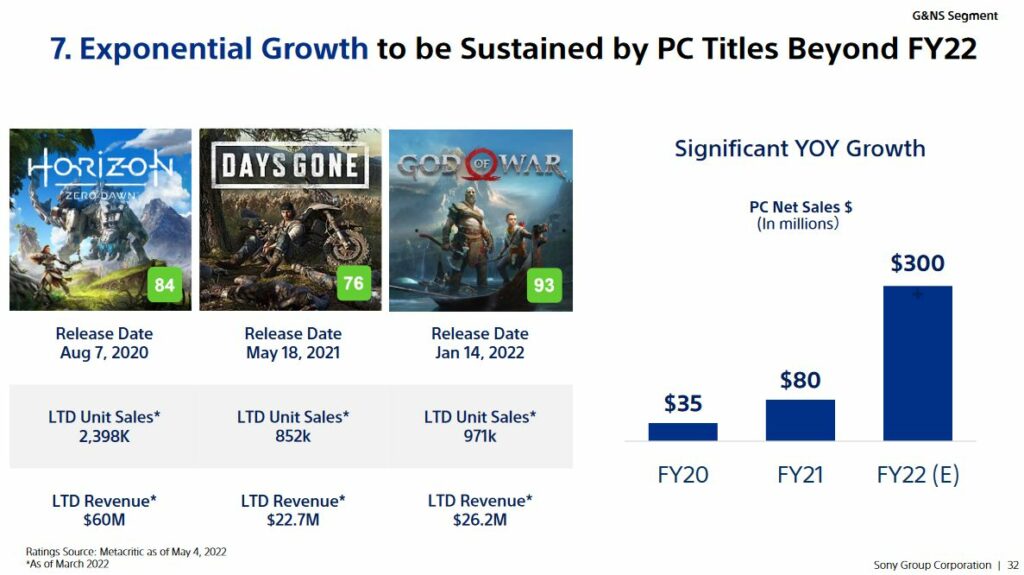 “By expanding into PC and mobile devices and, it must be said, also into live services, we have the opportunity to move from a situation where we were only present in a very narrow segment of the overall gaming software market, to a situation which is a situation where we are present almost everywhere”, becomes Jim Ryan quoted†