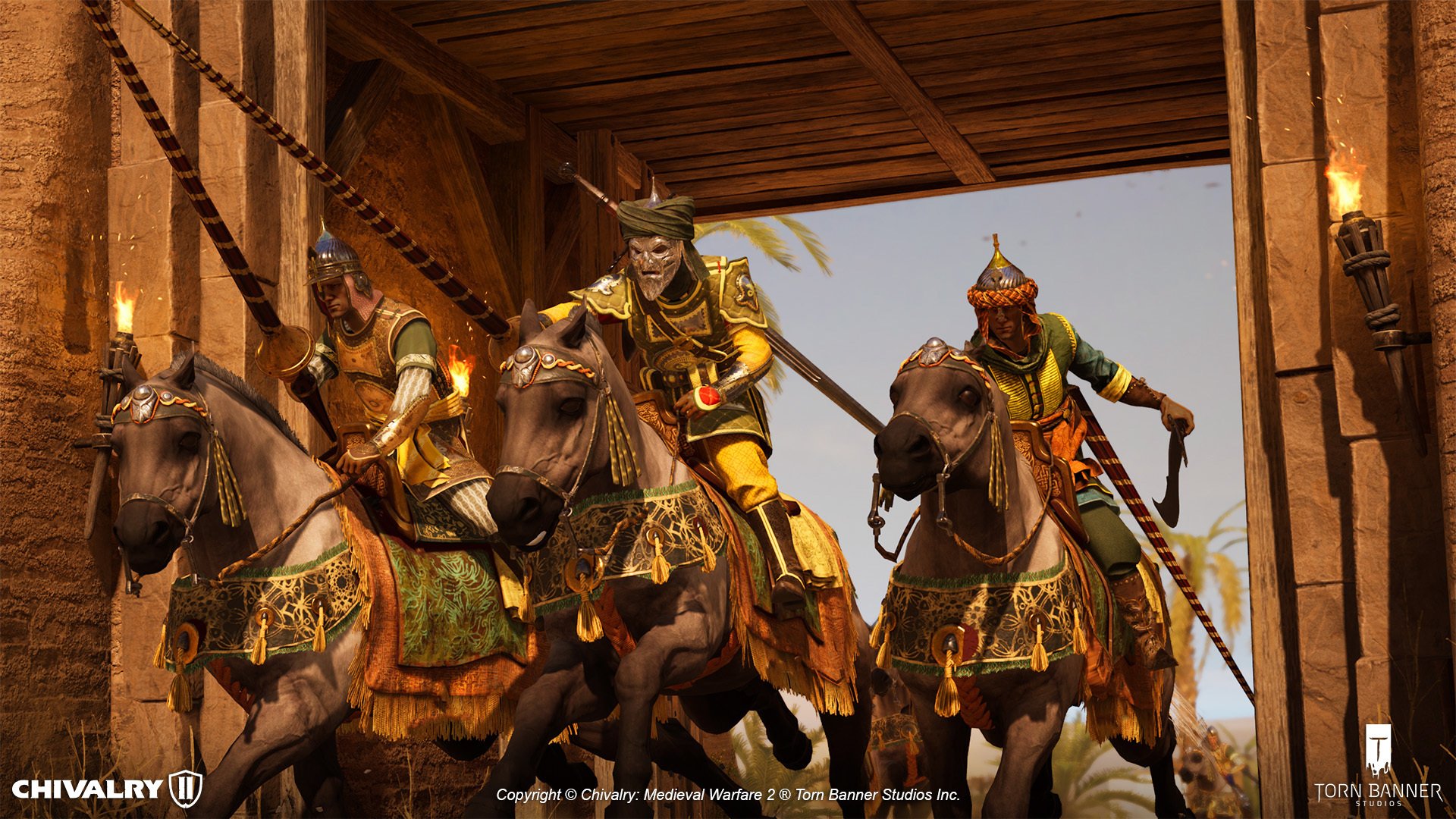 Tenosia, the strange lands to the south, have long hovered as a distant threat over the lands of Agatha. They are best known to Chivalry (2012) players as the target of a failed crusade that led to the death of King Argon the First. Tenosia therefore played a key role in igniting the civil war between the Mason Order and Agatha Knights.

Now the serpent empire emerges from the shadows, intent on sinking their fangs into the barbarous lands of the north. Ride to war on horseback as Tenosia or the Mason Order!

With this new faction comes a variety of customization additions. When playing for Tenosia, expect visual and audio differences in armour, helmet, weapon skins, heraldry, new voices, and more! 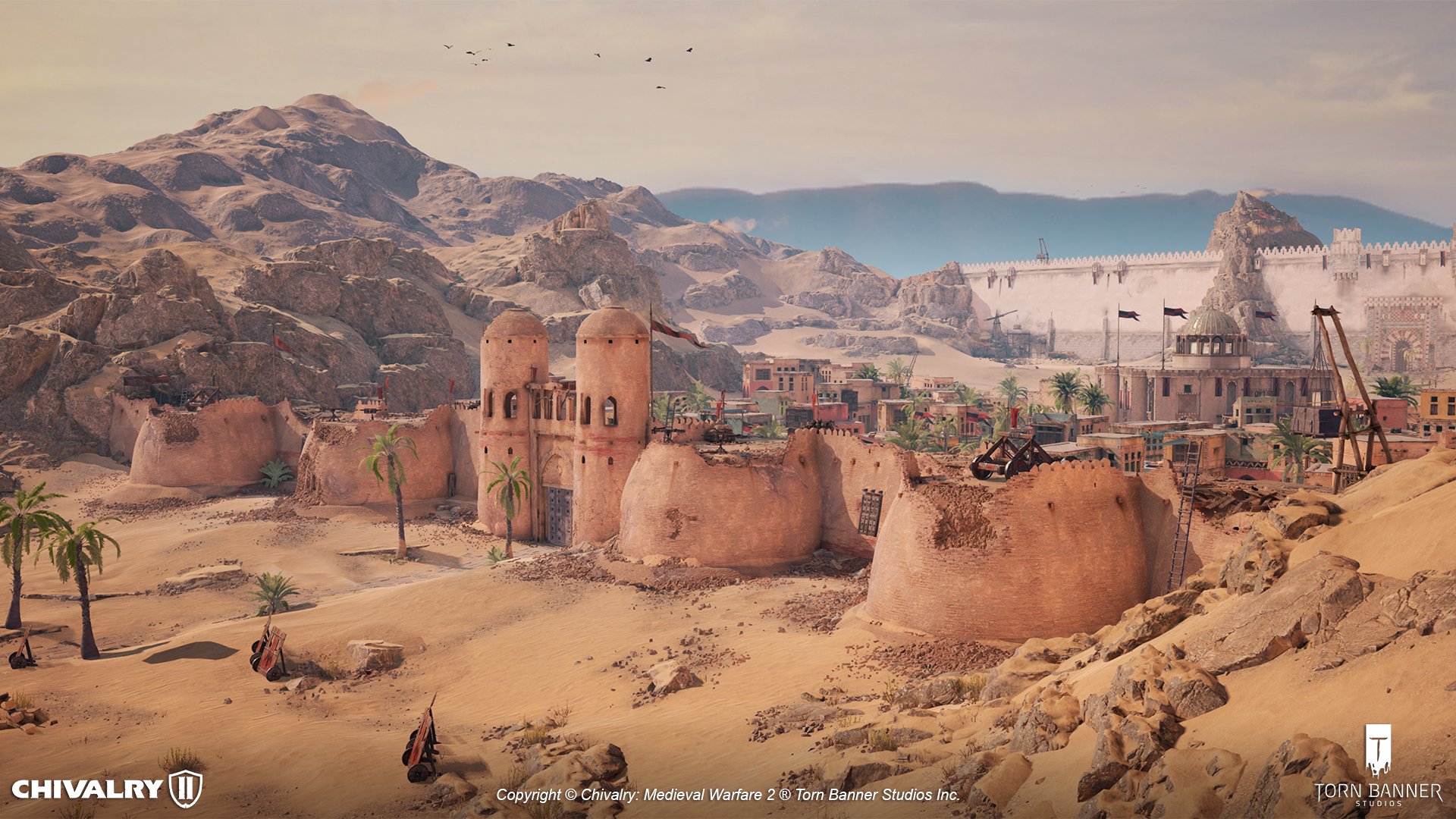 The Breach of Baudwyn (Team Objective)
Built by the Agathian commander of the same name during King Argon’s rule and fall, the long standing bulwark separates the lands of the north and south. No army has ever attempted to break through… until now. Bringing with them firepower unheard of, the Tenosians breach the town’s gate and markets in an attempt to blast through the bulwark with bombastic bombards, a demonstration of their engineering prowess.

As Tenosia, attackers must clear the following objectives:

This map will also feature cavalry waves during certain objectives.

The Razing of Askandir (Team Objective)
Reacting to their call for war against the North, the Masons set sail to the port city of Askandir to demolish the city lighthouse and set the Tenosian library ablaze.

As Masons, the attackers must complete the following objectives:

This map will also feature cavalry waves during certain objectives.

Desert (Team Deathmatch)
A battle on the outskirts of Baudwyn in the dark, cold night. After the fall of the bulwark, the Tenosians regroup for another assault only to be greeted by the Mason Order’s vengeful frontal force.

Players will fight each other in the ruins with cavalry support. A lone ballista is present in the middle. Taking control of this ballista will increase the odds in achieving victory! 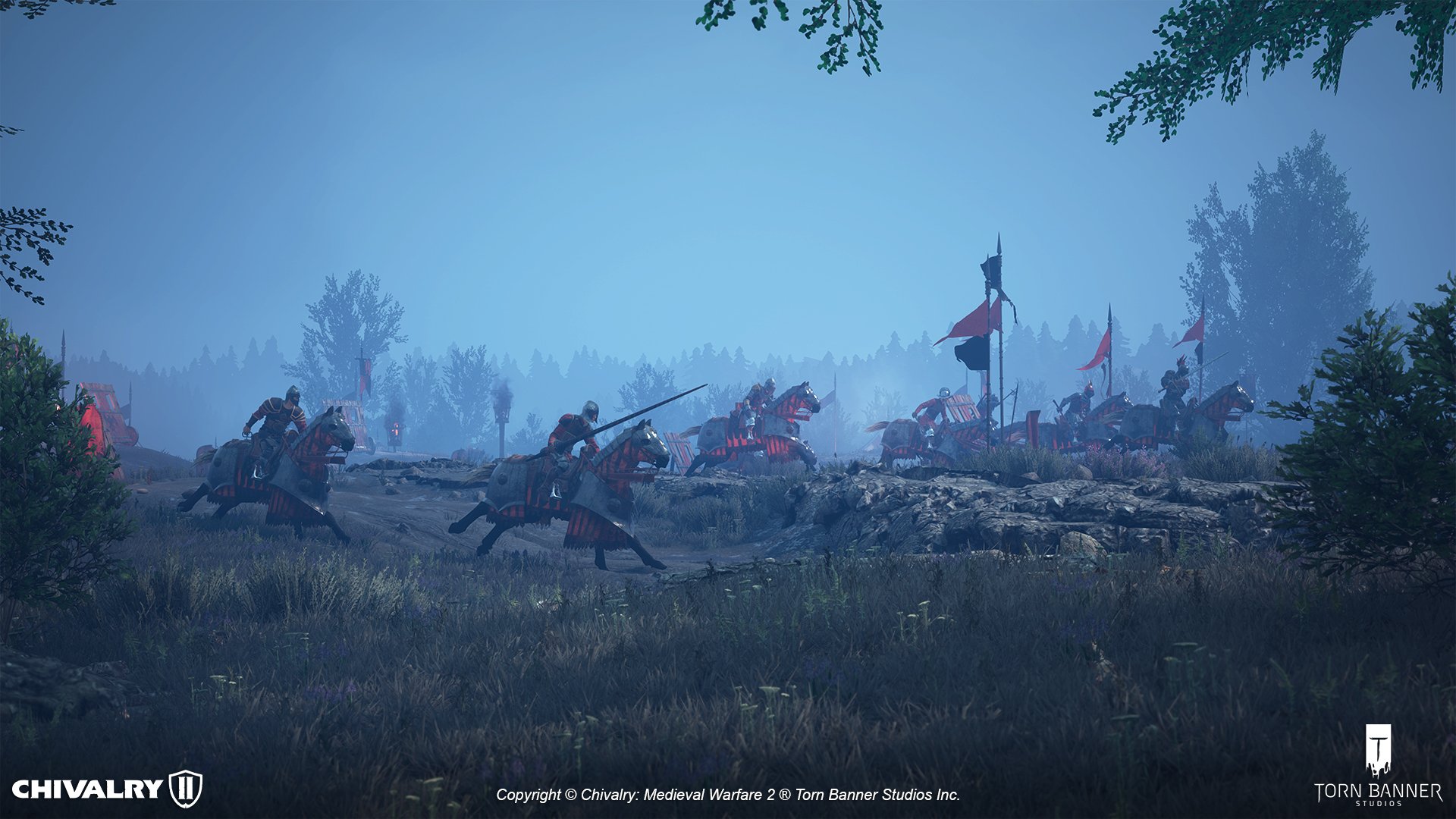 The Charge of Wardenglade (Team Deathmatch)
The classic open field of Wardenglade, now with horses! This map is not present in the public test.

Due to player feedback, we have implemented a number of changes to Coxwell Balance to ensure an enjoyable experience. These changes primarily focus on giving defenders tools to better defend. For the 64 player mode, we have made it easier for defenders. For the 40 player mode, the last objective also now scales so that attackers have to kill less defenders for objective completion.

Auto balance has been noted as a frustration for players. Part of the solution is to make sure that team switching after the game begins is minimal and that players aren’t unexpectedly switched to the opposite team during the last part of the match. We are looking at further solutions to address additional feedback we’ve received from team balance as well.

There is an expectation at higher levels of play that the effort and skill involved in reducing stamina to 0 should reward a free hit (Currently players have a chance to avoid by dodging out). For disarming rules, we are now making it easier to land the free hit as a reward.

Until now, overheal has given a standard bonus health value regardless of class. Currently, the survivability of archers and vanguards is slightly higher than expected for certain weapon types, while knights are a bit weaker. Changing the overheal values brings this vision more in line. We will continue to monitor this balance going forward.

It was noted by community testers that sprint charge attacks have a very wide turn limit and can be difficult to read or react to. The changes here aim to make this a bit more consistent. Please note that the higher percentage above means that the angle is reduced.

[These special attack adjustments are for all weapons, not just the ones listed below]

It was noted by community members that some weapons (mostly longer weapons) had a very wide stab compared to others. This has been refined to be more consistent and reactable.

There existed an exploit where jumping with some long weapons at certain angles allowed for hits through blocking. We have adjusted the height of the parry box and will continue to monitor for further exploits.

We have increased the appeal of engineers by reviewing their place with community testers. With players being able to hit players behind walls and being able to destroy multiple walls easily, we have adjusted constructable collisions overall to thwack on hit. This means that your attack will hit constructables and finish instead of cleaving, giving an overall buff to using them. To make sure that engineers stay balanced, we have added a class limit of 12.5%. A team of 32 can have 4 per team.

Communications with our testing groups and examination of weapon metrics showed the Warhammer as a very powerful weapon. Speed and damage in addition to stamina damage were slightly overtuned and adjustments were made based on these discussions. 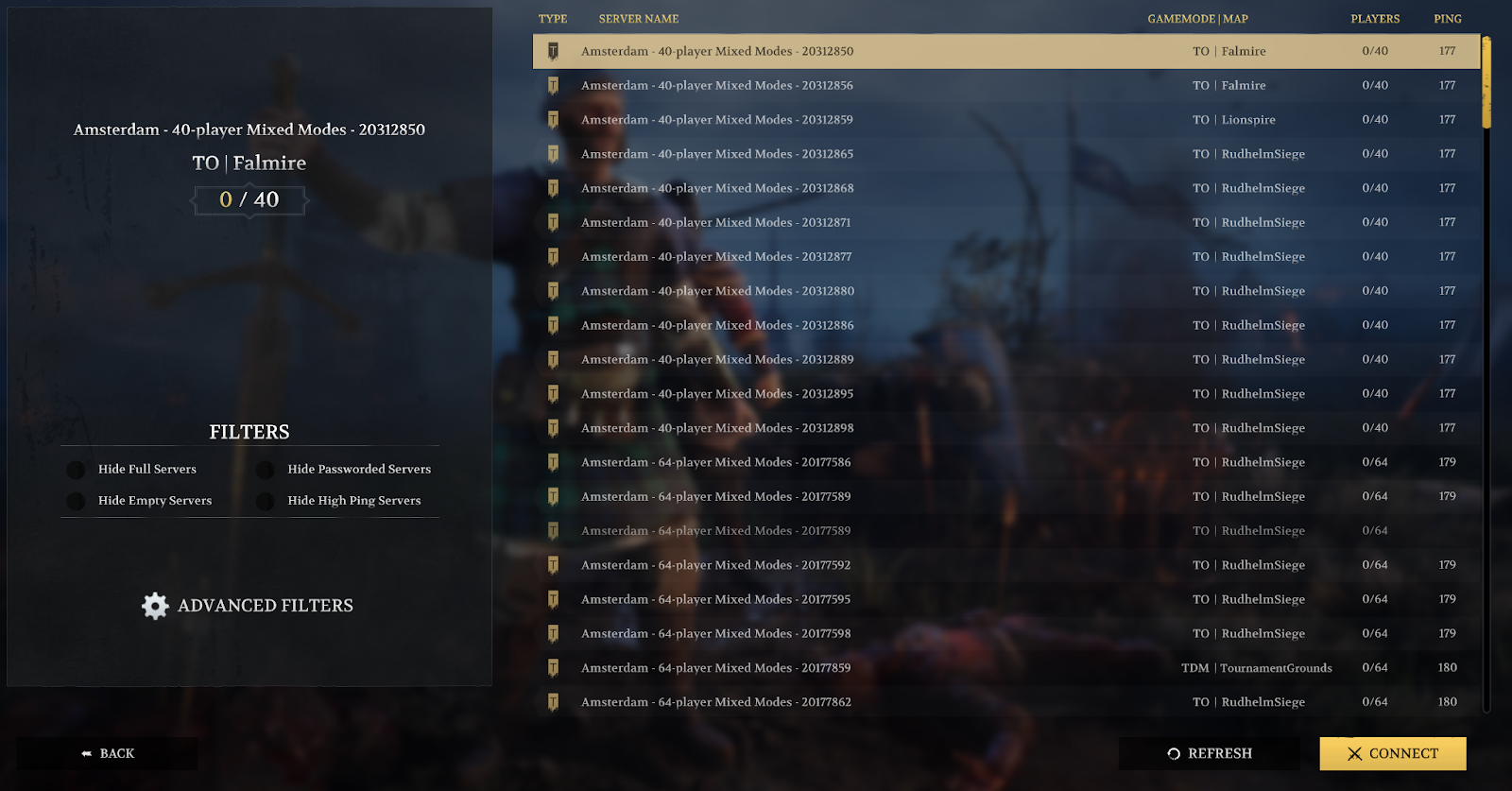 In Last Team Standing, we noticed situations where final players would attempt to run from encounters and thereby extend the amount of time between rounds. This ultimately gave a less enjoyable experience for those waiting to respawn for the next round.

We are always looking to improve the player experience. This update comes with some optimization targeting consoles.

The addition of horses created an opportunity to visually distinguish weapon damage numbers and how they connect to damage types against classes. Since bonus damage is given to players riding on horses at certain speeds, we have unified these to give more information to the player.

Based on player feedback we did a comprehensive sweep through our achievements and found some irregularities to fix.

Votekick is a feature that we are also looking at improvements for, starting with this exploit fix