Greetings Travelers! This is your Genshin Impact dev team, inviting you into the summertime of Teyvat with Genshin Impact’s Version 2.8, Summer Fantasia, coming on July 13!  The Golden Apple Archipelago is once again open with a different look, bringing a variety of plots, stories, challenges, and rewards. Get ready to delve into realms you’ve never set foot in before and discover a different side of your longtime companions.

Then, a year after Kaedehara Kazuha’s first arrival, the wandering samurai seems to want to deepen his friendship with you while bringing the first chapter of his personal Story Quest, as well as his close friend Shikanoin Heizou.

Compared to the previous island adventures, this year’s Summertime Odyssey big event aims to bring even more as the Golden Apple Archipelago sees a drastic makeover. Fresh landscapes and lots of new stories can be found throughout the event; including richer rewards like a great number of new treasure chests. Players will also have the chance to obtain the four-star character Fischl and her newest outfit, both which are available for a limited time.

Travelers visiting the Golden Apple Archipelago this summer can expect some serious explorations, as each island has been transformed through different themes and puzzles.  Xinyan, Fischl, Kazuha, and Mona traveling with us also seem to have their secret connections to certain areas, where you may run into mysterious realms with danger and treasures. 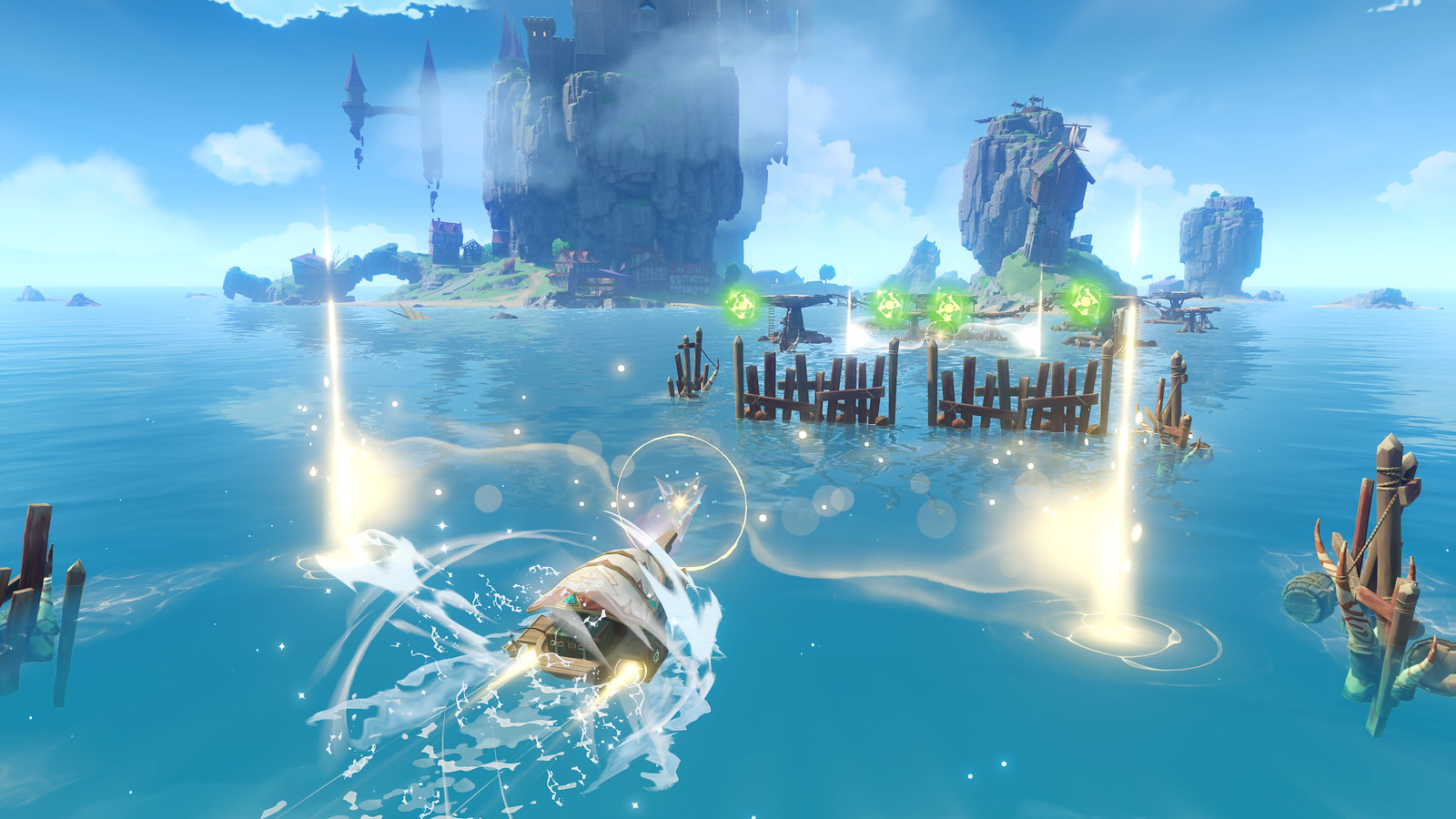 Sailing is always the highlight of island recreations, and this summer you can either speedrun with your Waverider in the specially designed course or set sail with friends online. For example, the Reminiscent Regimen is a co-op-specific event with three different game modes. The Convoy mode requires all participants to escort a large raft to its destination, while Raid requires players to pilot their own Waverider to board floating platforms and take out enemies. In Descent mode, players will have to battle their way down from a high platform in the sky. Be careful, or you and your teammates may find yourselves struggling while airborne. 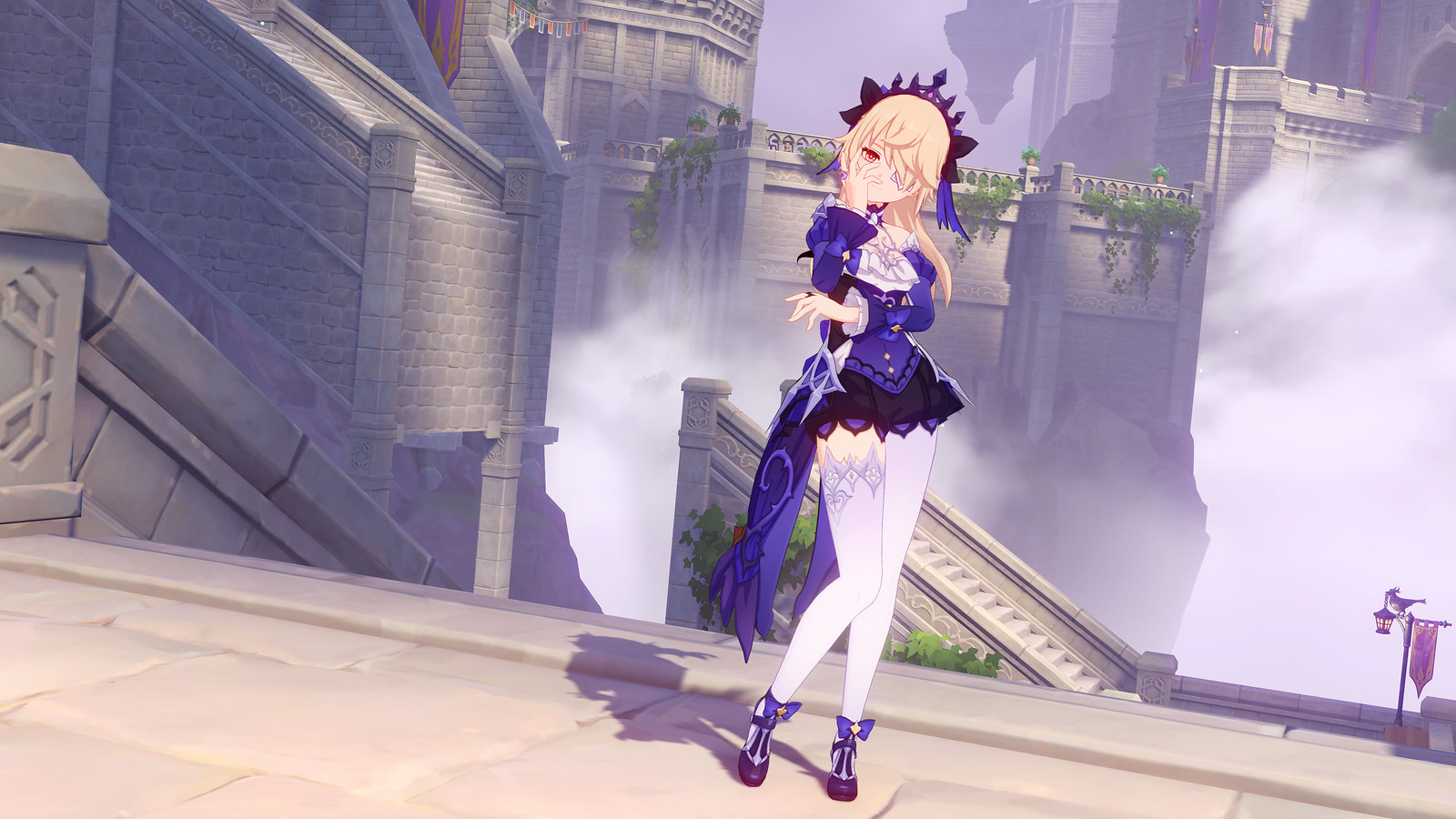 If you would like to take a leisurely stroll along the beach, remember to pick up the special conches during the Resonating Visions event. By collecting the conches, you can listen to intriguing tales and stories, and redeem Fischl’s all-new outfit with a certain number of conches. All in all, this year’s Golden Apple Archipelago will not only give seasoned Travelers a familiar vibe, but also introduces plenty of fresh exploration mechanics and storylines for everyone!

While you have a good time on the islands with other characters, Version 2.8 allows you to bond with even more friends, old and new. Diluc, Kaedehara Kazuha, and the brand-new playable four-star character Shikanoin Heizou will show up in the latest events and stories.

As one of the early playable characters, Diluc will receive a brand-new outfit. The outfit, featuring a distinctive look, new idle animation, and new effects, will soon be available in the Shop. Meanwhile, its backstory and a trial stage can be found in the Hidden Strife challenge event. 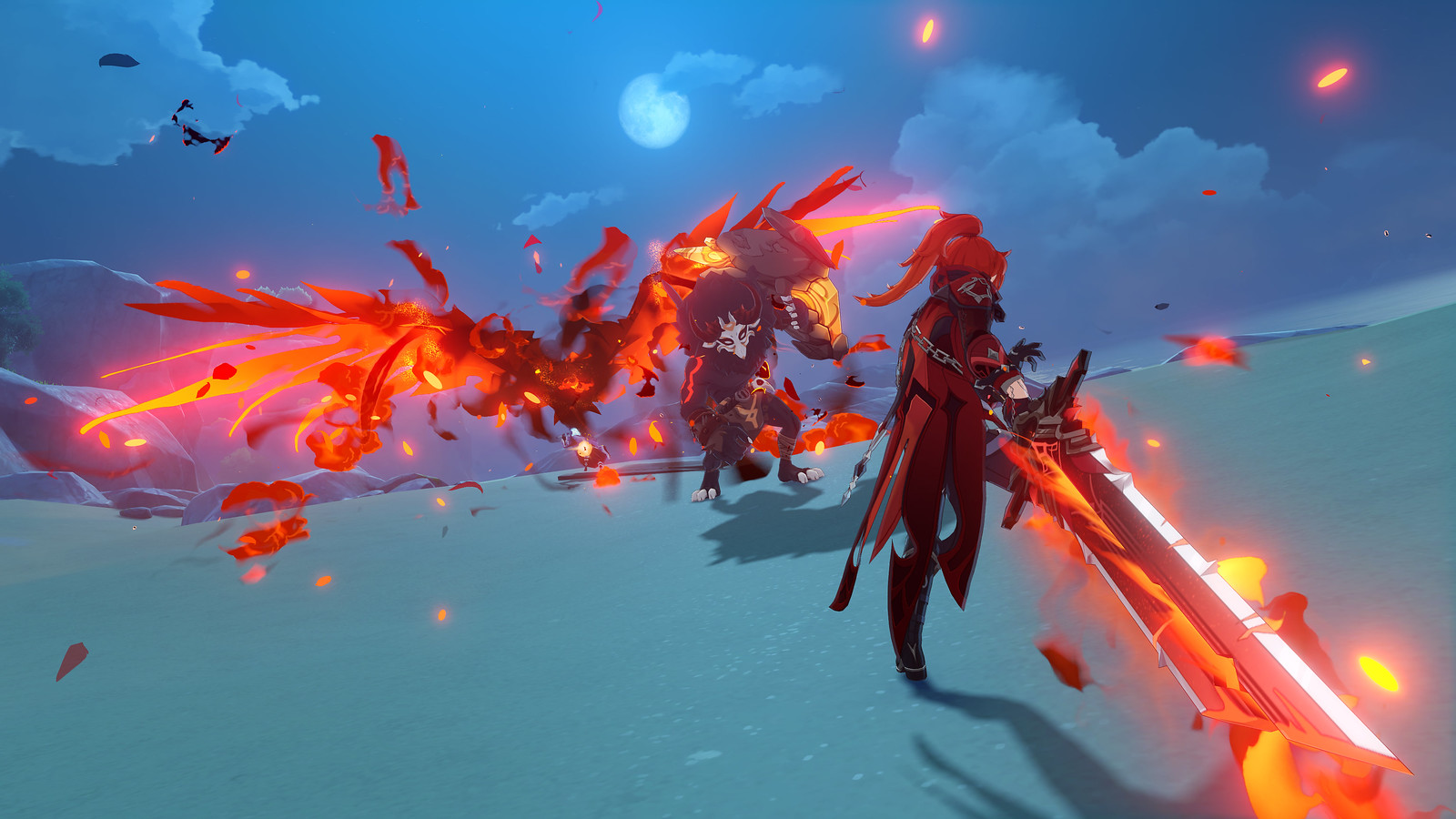 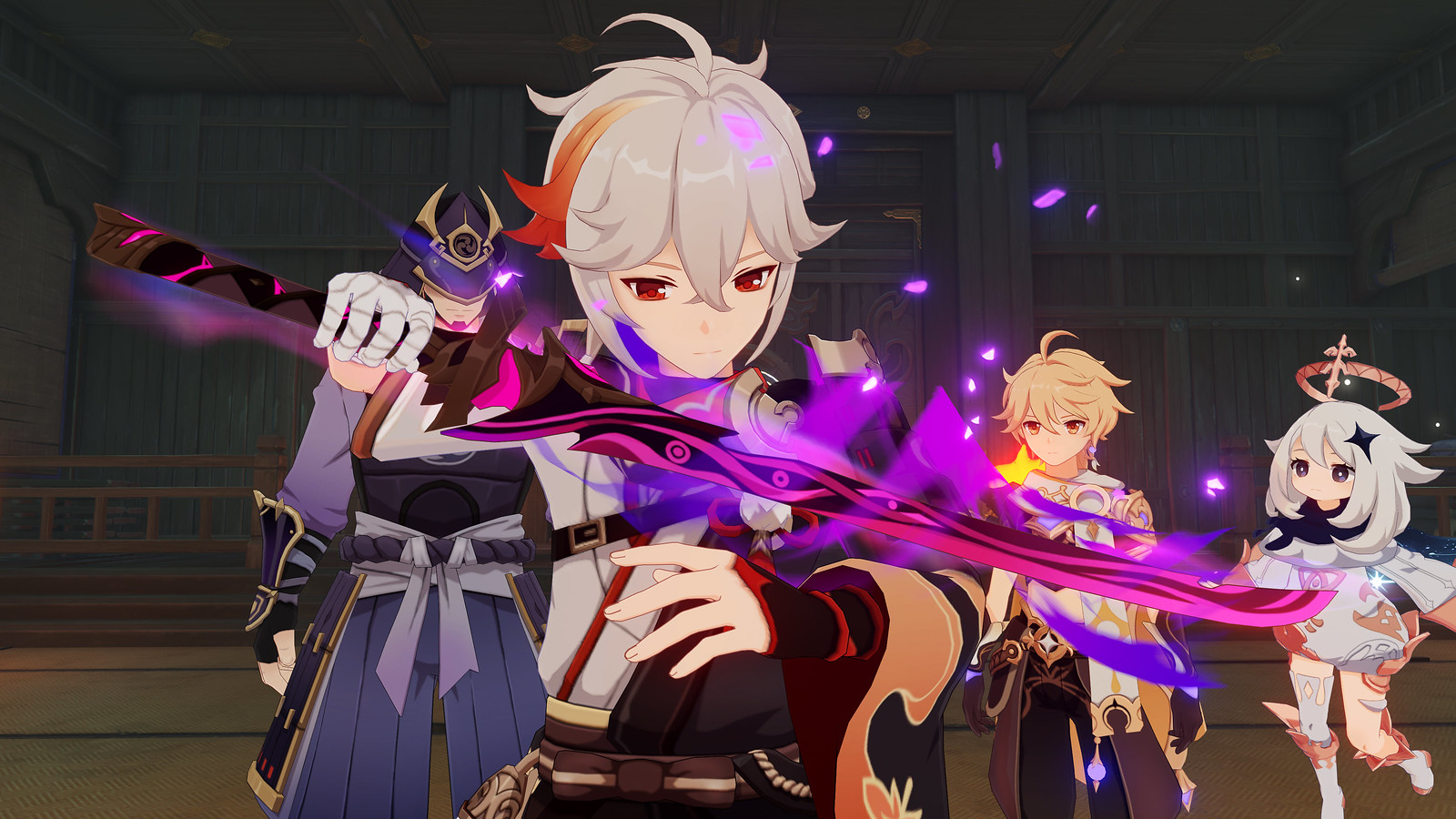 After joining the game for over a year, Kaedehara Kazuha’s Story Quest has finally arrived. Coming from a renowned family of swordsmiths in Inazuma, Kazuha’s story seems to be related to a mysterious sword and a duel. You will find out more in his Story Quest, Acer Palmatum Chapter.

Kazuha’s friend Shikanoin Heizou will also make his debut in the upcoming version. Heizou is a young genius detective of the Tenryou Commission who is active in the frontline in the fight against criminal masterminds. Despite his free and unruly nature, Kujou Sara thinks highly of his abilities in crime solving. You may find out more, and even join his work in his Hangout Event. 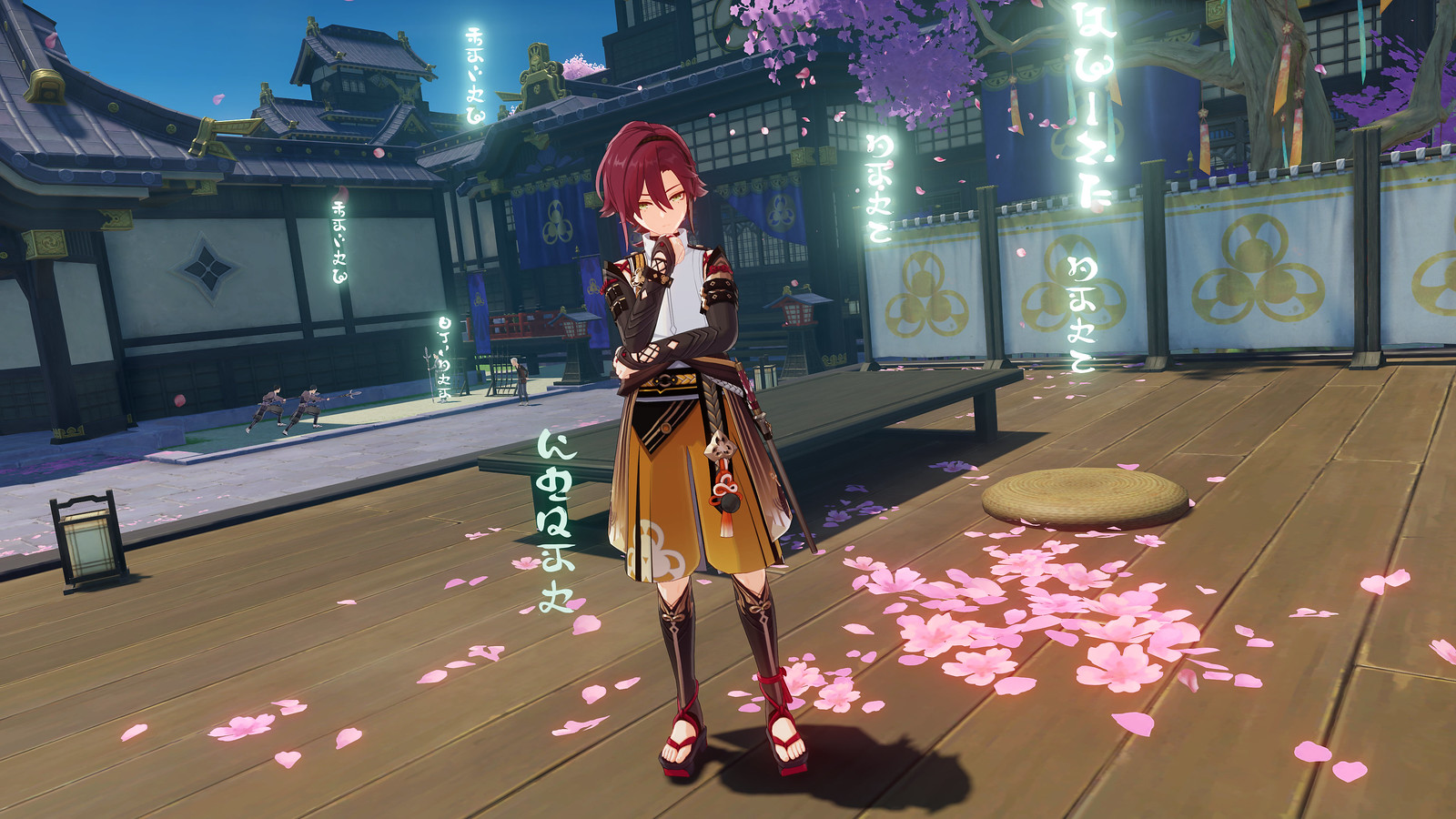 In combat, Heizou is our first melee catalyst user. Though he wields a catalyst and carries an Anemo Vision, his Elemental Skill and Elemental Burst are all unarmed techniques just like his Normal Attack. His Elemental Skill will launch a Heartstopper Strike, and charging his Elemental Skill can grant him special “Declension” stacks. Once Heizou reaches a certain amount of Declension stacks, his Elemental Skill’s DMG and AoE increase. His Elemental Burst will unleash a Windmuster Kick, pulling in nearby enemies and dealing AoE Anemo DMG. If the enemies are affected by the Hydro, Pyro, Cryo, or Electro element, a delayed follow-up explosion will occur, dealing damage of the corresponding elemental type. Furthermore, Heizou can decrease sprinting Stamina consumption for your own party members.

With Version 2.8, more events and rewards are also waiting for you to explore. For instance, with the Evermotion Mechanical Painting event, you can solve a special puzzle game and get a new Furnishing for your Serenitea Pot. 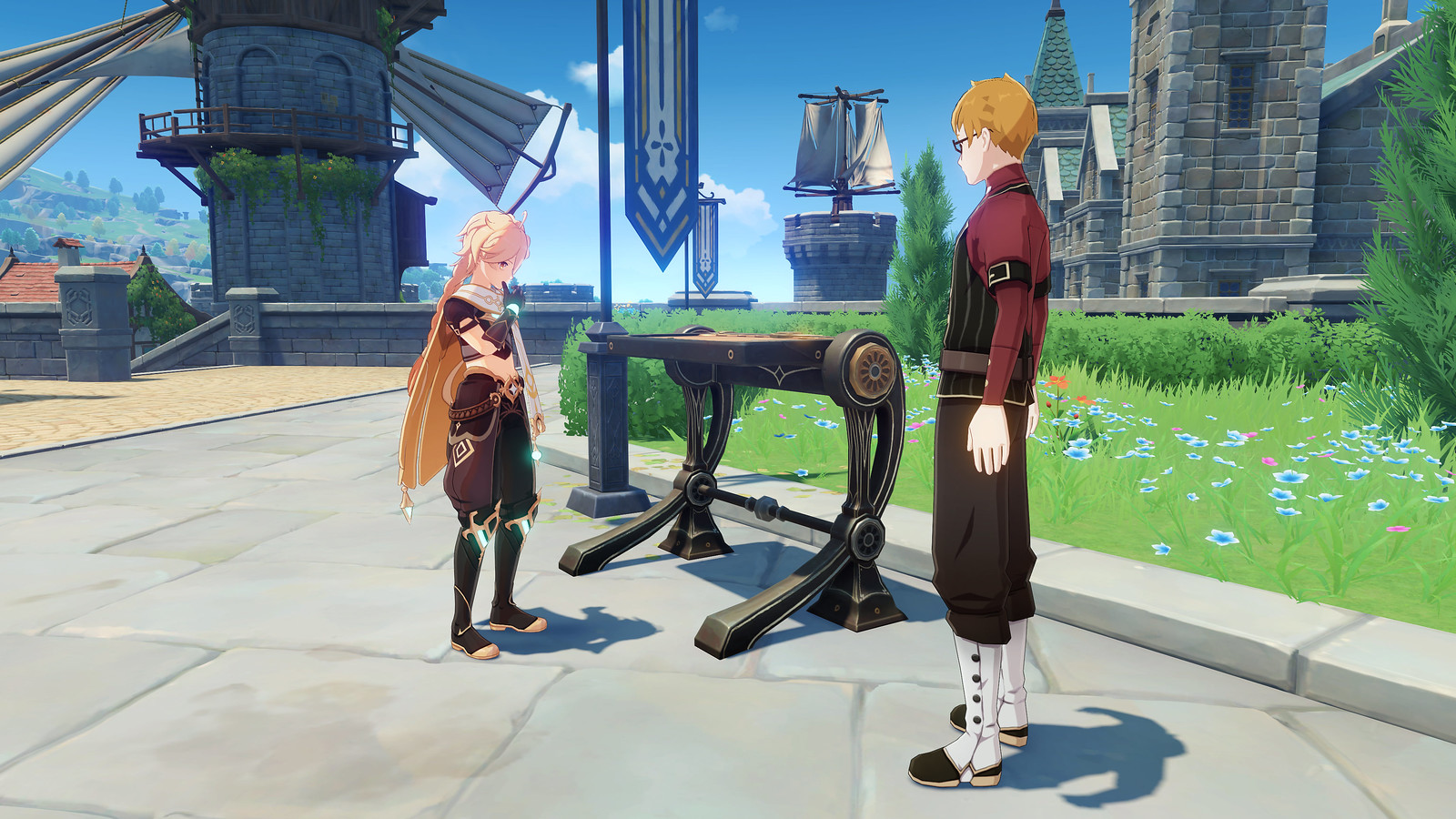 Last but not least, a reminder that the PlayStation Plus Pack, available to PlayStation Plus members at no additional cost, will be refreshed after Version 2.8 goes live. So please remember to claim your PS Plus Pack which contains Mora ×50,000, Hero’s Wit ×20, Mystic Enhancement Ore ×15, and Fragile Resin ×2 for free.

And that’s all for today. We hope to see you next time!