Hi everyone! I’m Nicolas Bécavin, Lead Engine Programmer on A Plague Tale: Requiem. The game launches on October 18, and I’m here to give you a little preview of what you can expect tech-wise!

We decided to develop A Plague Tale: Requiem on PlayStation 5 to set ourselves utterly free from last-gen constraints and make the most out of the features brought by the new gen. The potential it offers is incredible! Take the load time, for instance: it is reduced in a way that makes new map and level design possible. With an increased memory on top, we get better draw distance which means you’ll be able to see way farther. Horizons will expand! The result is a much more open environment than the first game.

Rats are a crucial feature of A Plague Tale, and for this second game, we wanted to push new-gen possibilities to the max to bring the rats-induced horror and trauma to the next level. The number of rats on-screen has been multiplied by 60, growing from 5,000 to 300,000! It’s an excellent number to convey the vision of the apocalypse, which keeps increasingly oppressing our heroes. We’ve also changed the aspect of their movement so that they look like a giant wave, much like a tsunami crashing down on you. We’re lucky to work with our in-house engine and rely on it to tackle challenging renderings like this, one of an element that is completely specific to A Plague Tale.

Thanks to the new GPU’s power, the lighting quality can be drastically improved. With a wide array of technical tools and reduced constraints, we can accentuate the role of light, and new situations which involve light can be introduced. Hugo and Amicia will discover new sensations as they travel south, and so will the player! Thanks to this new level of detail, they’ll experience an atmosphere enriched with light beams and enhanced lighting over atmospheric elements such as volumetric fog.

A new-gen feast for the eyes

Requiem’s tech doesn’t only take players to a setting with a more vivid atmosphere, but it will also bring more depth to the visual simulation in general. This includes increased geometric quality: technically, there are more polygons over the mesh! The resolution of textures is also improved. A good example of how these advancements affect in-game experience is the level of detail with which terrains will be rendered. For instance, we heavily rely on parallax occlusion mapping to add tiny volumetric details over terrain and props. There will also be more physical and dynamic objects, which will affect how clothing is rendered. 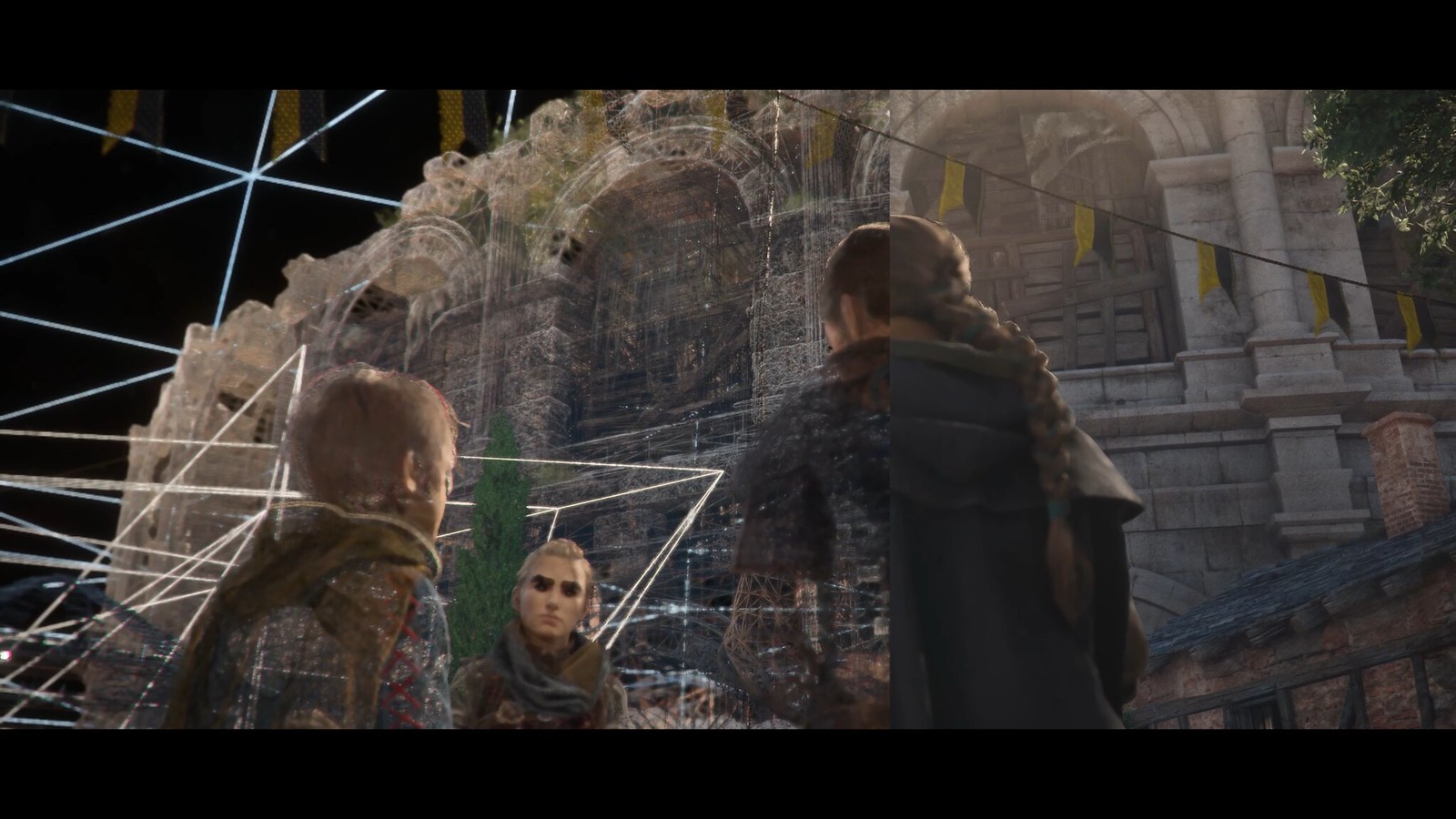 On top of all this magic, the spatial experience will be enhanced thanks to 3D Audio. That means you’ll be able to perceive where the character speaking is: behind or in front of you, above or below…  Players will be surrounded by the game and engaged in a much more realistic and immersive way.

The PlayStation 5’s new controller, the DualSense, has also been one of our central points of focus. It brings exceptional immersive tech through haptic feedback and adaptive triggers. I will hand it over to two of my fellow studio members to explain this further.

Hey everybody! We’re Asobo Studio’s Cyril Doillon, Lead Programmer, and Aurelien Piters, Audio Director. We’re super excited about everything the next gen brings to the game… with a special mention to the PS5 DualSense controller! It brings a new level of realism and immersion to A Plague Tale, with a bunch of new features added following Innocence. It’s been incredible to work on, and we’ve strived to make the most of this brilliant technology. Here to let you in on DualSense innovations we’ve got in store for you in A Plague Tale’s next chapter!

One of the most ground-breaking innovations of the DualSense controller is haptic feedback and adaptive triggers. We’ve started thinking about their implementation while working on the next-gen adaptation of Innocence, which gave us an idea of the most relevant choices for our new game. Requiem will introduce real physical response and gameplay improvements tied to it. The sensory feedback will create realistic sensations in using weapons and tools.

If a weapon requires more pressure, for instance, adaptive triggers will adjust the sensation of effort given to the player. Concerning the sling, if you hold the button too long, you’ll lose precision. Adaptive triggers will give the impression that shooting becomes harder, which also works for the player as a marker to measure the right time to shoot. 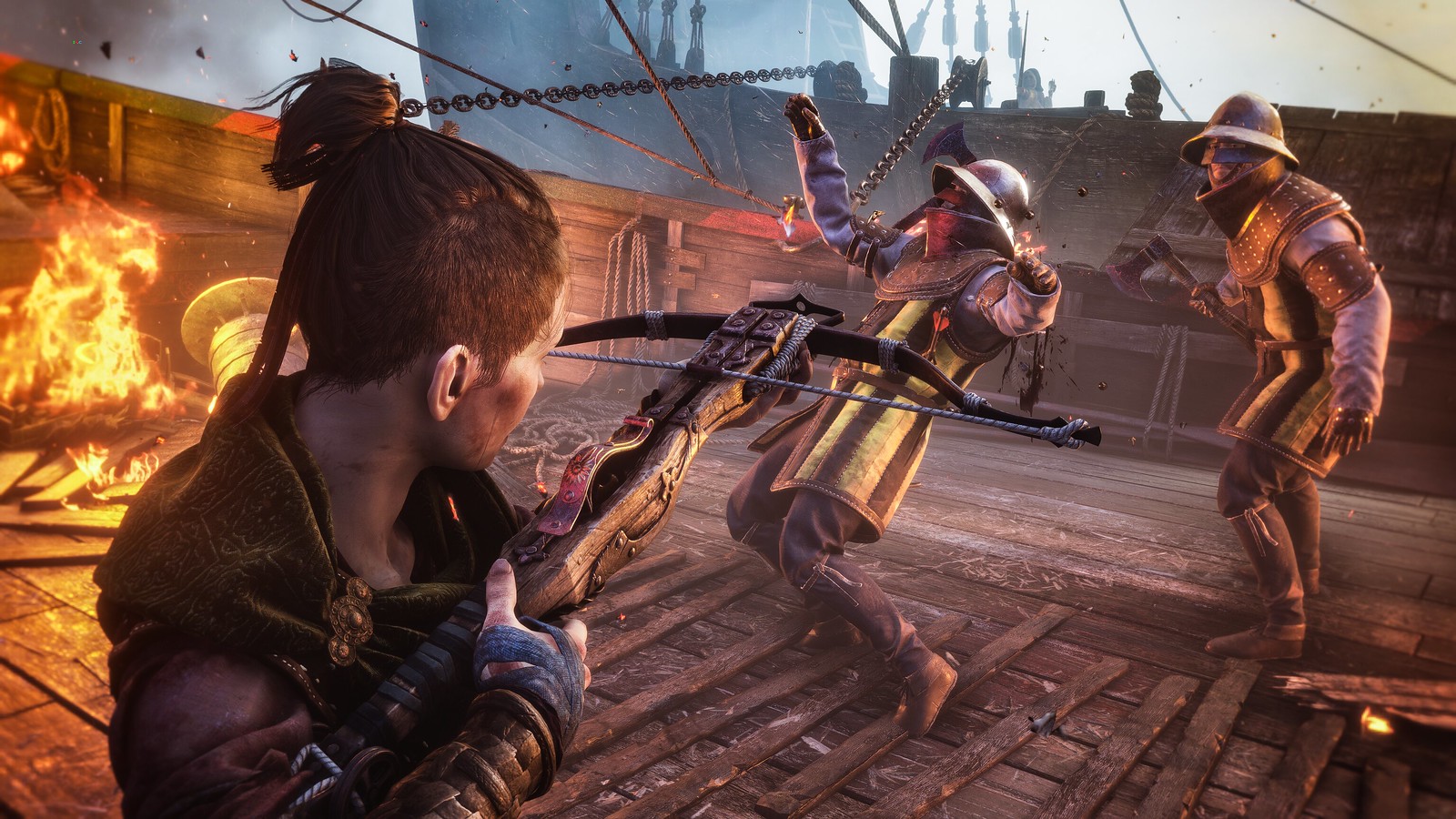 Amicia will also have a new weapon: a crossbow, which will answer to the same law. At the same time, its physics is not the same as the slings. It’s more powerful, but it’s slower to use and equip. Such sensory qualities will find their place in the simulation thanks to adaptive triggers. You’ll have to press a first time to equip the crossbow, then a second time to shoot. This next-gen vibration technology allowing us to tie a physical reaction to the player’s input is incredible for us developers. We were used to working with image and sound; now, we can create direct effects on the player’s fingers to simulate a real tool.

There are also refreshing features coming to communicate character movement: haptic feedback is used to simulate the effect of every step while sprinting, producing little jolts for the player to feel the sprint’s rhythm, giving the impression of being right by the side of the characters and share their sensations.

The audio is also fully reworked with haptic feedback. Swarms of rats can be subtly felt through the pad through stereo vibrations. It’s as if you could touch sounds. That’s also the case with explosions and real-time cinematics; they’ll affect you physically, thanks to the range of sensory input offered by the DualSense controller. The opportunities it presents bring a whole new dimension to the gameplay; you’ll be able to feel movements around you, such as where the rats are coming from! The game will offer richer situations thanks to a heightened perception of the environment, including direct interaction and semi-distant elements.

Another innovation brought by DualSense is its built-in speaker. We use it to play the sound of weapons when no headset is used, giving audio feedback to the player when using the sling and the crossbow. It delivers a far more dynamic experience, with the possibility of hearing an arrow or a stone in the air. It’s a third speaker given to the player, allowing subtle feedback to be delivered on top of the rest of the soundtrack, acting independently of the music and the ambient sound.

We hope you enjoy all these prospects and will be ready to embark on Amicia and Hugo’s next journey on October 18! You can pre-order the game now on PS5.