Dragon Ball: The Breakers is the latest game to hit our Dragon Ball game catalog, and it’s one of the most unique right off the bat! I played the open beta test alongside the many players who participated, and boy, did I have a great time. Whether I played with my friends or online using random matchmaking, nothing beats the satisfaction of successfully escaping from the Raider with my Survivor teammates or getting that win by destroying all Survivors as a Raider.

With that being said, let’s talk about the game, and here are some tips using my experience from the open beta test!

As a Survivor, players have one ultimate goal — to escape! Whether it is resetting the timeline by finding the five hidden Power Keys to activate the Super Time Machine or utilizing the more miniature Escape Time Machine. If you can escape, that’s a win in our book.

You can equip different skills and tools on your Survivor to aid you in your escape. Travel long distances using the grappling hook and floating device or distract the Raider by throwing a smoke bomb or Solar Flare over their way. Using these different tools and skills will give you an advantage in the field. There are many tools and skills to discover, so try them out and find a combination that matches you and your play style.

Players can also be equipped with special Survivor Skins that feature iconic Dragon Ball characters — The Farmer, Bulma, and Oolong. Each Survivor Skin comes with skills unique to its character. Oolong can transform to remain hidden, Bulma can distract Raiders with her charm, and the Farmer can dig for items.

What makes the Survivor experience unique is the ability to equip items called Transpheres onto your character. Transpheres are special orbs that have the soul of a super warrior contained within them. They temporarily allow Survivors to “Dragon Change” and borrow fan-favorite Dragon Ball characters’ powers to help escape from the Raider. Some skills include Goku’s Kamehameha, Vegeta’s Galick Gun, and Tien Shinhan’s Solar Flare.

Don’t be fooled, though. While powerful, the power of the Transphere is temporary, and it’s up to you to decide when it is the right time to use this trump card. Will you use these powers to escape, or will you use them to help defend the Super Time Machine and your teammates?

You can’t escape alone! The Raider is immensely powerful, so the survivors must work together as a team for a chance of survival. Throughout a match, you must work together as a team of seven to collect all the power keys to activate the Super Time Machine. Once a team member finds a Power Key, any team member can set it. Consider splitting up to ensure the team finds the Power Keys promptly and avoid the Raider discovering everyone in one area. If you start to hear your character’s heartbeat, the Raider is nearby, so be sure to hide so they can’t find you.

The Survivors can utilize fun and quirky Dragon Ball character stickers to communicate with each other. For example, you can collect all seven dragon balls to summon Shenron and make your team more powerful. When you notice that all those dragon balls have been collected, you can use a sticker to call your teammates to the altar and summon Shenron! We’ve also seen the sticker of Krillin screaming for help used to call teammates over to resuscitate fallen comrades. Of course, it’s still up to them if they want to take the risk and save you! These character stickers offer a global way to communicate using fun Dragon Ball expressions.

Work with your teammates and use the tools and unique skills to help strategize your escape from the Raider.

While the Survivors are working together to reach their ultimate escape goals, the Raider is on the hunt to search and destroy! Raiders are well-known Dragon Ball rivals, and players can choose between Cell, Frieza, and Majin Buu.

Each Raider has four evolutions, each unique. Cell is an “all-rounder type” with a fast growth speed and average search skills. Frieza specializes in searching and has excellent scouter abilities, making it even harder for Survivors to hide. Majin Buu was recently revealed to be a “high-risk and high-return type,” where he has a slow start compared to the other two Raiders but offers an extremely rewarding and powerful experience once you reach his third and fourth form. What makes the experience of the Raider unique is the fact that with each evolution, new skills become accessible. Raiders are not powerful right off the bat, and the game rewards you with more power if you destroy the environment, civilians, and Survivors!

The map is huge, so finding Survivors can be tough at times. Each Raider has specific abilities that allow them to scout. For example, Frieza can use his scouter to find the Survivors in his first form, but Cell will need to transform into his 2nd form to use Ki Detection.

Here’s a fun tip: Raiders can pick up a Dragon Radar and use it to find Survivors because many of them will be holding Dragon Balls! Raiders can also use this opportunity to collect the dragon balls and wish to become either become stronger, heal wounds, or become immortal. Why would you want to be invincible? Believe it or not, Survivors can accumulate enough change power to cause some severe damage. Don’t underestimate teamwork!

Whether you enjoy working with teammates to overcome an overwhelmingly powerful foe or find joy in being the player that wreaks havoc on others, Dragon Ball: The Breakers has something to offer everyone. Each match is different, and players can take on the game with different character builds that match their playstyles.

Customize your Survivor from the looks down to the skill sets to find what works best for you! Want to experience overwhelming power? Play as the Raider and destroy all Survivors! Which path will you choose?

Dragon Ball: The Breakers is available now, and players can pick up the Special Edition, which includes a customizable costume set, a victory pose, and vehicle skin.

By the way… did we say there are only three Raiders? 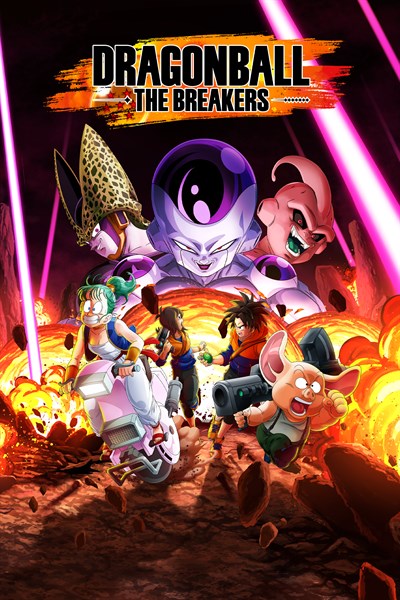 ☆☆☆☆☆
35
★★★★★
$19.99
Get it now
DRAGON BALL: THE BREAKERS is an online asymmetrical action game in which a team of 7 ordinary citizens tries to survive the Raider (a classic DRAGON BALL rival such as Cell, Frieza, and Buu), who will hunt them down and evolve during the game into an unstoppable force. Escaping won’t be so easy!

• Escape as a team… or on your own!
Cooperate with others while there is still time, but the Raider or other Survivors’ decisions might force you to go at it alone. What will be your playstyle?

• Trapped in a Temporal Seam
Escape from large maps composed of several areas, but be careful; the Raider always watches over you and may destroy areas to reduce the space at your disposal, making your chances of escaping much slimmer.

• Enjoy playing as a Raider: an iconic Dragon Ball rival!
As a Raider, you will enjoy overwhelming powers to hunt and wipe out Survivors. Master each Raider’s unique abilities to track, catch your victims to evolve, and become even more powerful!

• Customize your playstyle
Whether you’re a Raider or a Survivor, choose your progression path and unlock skills, skins, and items to fine-tune your own personal strategy to escape as a Survivor or triumph as a Raider.

• Enjoy unique power-ups and items
Vehicles, weapons, capsules… take the most out of each gimmick to outsmart the Raider and escape from the Temporal Seam!

*This product is a multiplayer game that is played mainly through online matches between players. The only modes that allow single play are Episodes, which will be the tutorial, and the Practice Mode, which allows players to practice the game.
*Online matches allow you to play against players from all over the world. You will match with people whose network conditions are optimal for the region you play in.